Australia's settlement by the Aborigines

Australia’s colonisation was no accident, say the numbers

Like many people, I grew up believing Australia was colonised by a small band of people, who had most likely landed on its shores by accident; but research I published this week suggests a far larger founding population of between 1 000 and 3 000 people. Using statistical techniques to manipulate archaeological data, my paper, in the journal Proceedings of the Royal Society B, explores the population history of Australia since colonisation 50 000 years ago to European contact in the 18th century. In so doing, it presents a new reconstruction of the prehistoric population of Australia.

At the heart of this analysis is a database of around 5 500 radiocarbon dates taken from archaeological sites across Australia; dates were taken from cooking pits (hearths), burials, middens, and other charcoal found in association with Aboriginal artefacts. 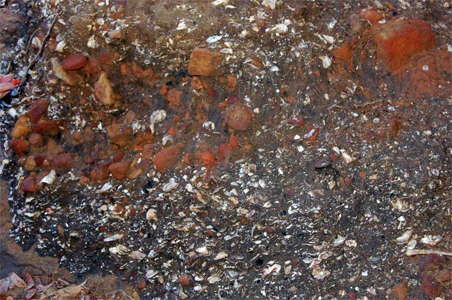 (the white objects are shells and possibly fish and marsupial bones, the reddish objects are either stones or balls of clay which were used to cook the food. A fire was made on the stones or clay balls, then the charcoal and ashes were scooped out, the food put in on top of the hot stones, possibly with leaves or bark around, then covered and left to cook for several hours - Don )

I inferred that these data directly correlated with population – so more data equals more people. There are a range of limitations and complexities around this issue, which are further explored in my paper. The two main techniques adopted included correcting the dataset for taphonomic loss (the loss of older sites due to weathering, erosion, destruction) and converting the radiocarbon data into an annual percentage record of population change over the 50,000 year period.

The results indicate that, following colonisation, populations did not expand and saturate the continent. Rather, populations remained low (less than 50 000 people) for some 40 000 years, before expanding in a series of “pulses” through the Holocene (the past 10 000 years). Despite correcting for taphonomic loss, these changes appear to remain, suggesting real change in the data, as opposed to losing older sites through other mechanisms. Two key points of interest came from this analysis:

1) during the Last Glacial Maximum (21-18 000 years ago), populations declined by as much as 60%. Put in modern-day terms, this equates to a loss of about 14 million people across Australia!

2) the population increase began much earlier in the Holocene than previously believed. In general, populations and a range of archaeological finds have always been considered to occur in tandem and in response to the onset of El Niño-Southern Oscillation intensification some 5 000 years ago.

El Niño-Southern Oscillation occurs when temperature variations of a band of water off the western coast of South America cause climate change across the Pacific, including Australia.

The data here suggests these changes may have occurred earlier and we may need to find another mechanism to explain them.

Going back to the start The quantitative population estimates from the data have proved very interesting. Using the broad, ethnographically-observed indigenous population at the time of European contact, considered to be in the order of 700 000 to 1.2 million people (although some estimates are lower), I used the annual percentage growth rates and worked backwards towards a founding population. Despite using a range of techniques and colonisation dates, I found in general a founding population of 1 000-3 000 would be required to produce the observed populations. As I wrote at the outset, this finding suggests that the colonisation of Australia was not undertaken by a small band of people as previously thought, but perhaps a larger population on some form of deliberate exploration or migration. This number of people broadly compares with genetics data that suggests a larger population would have been needed to ensure viable populations over the past 50,000 years. Is this the last word on the size of Australia’s founding population? Probably not – but we may now be closer to the truth.