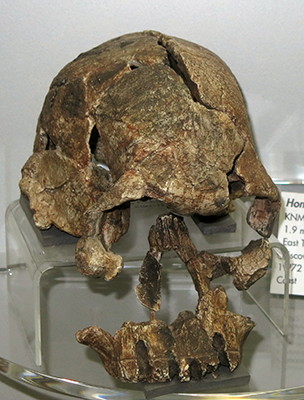 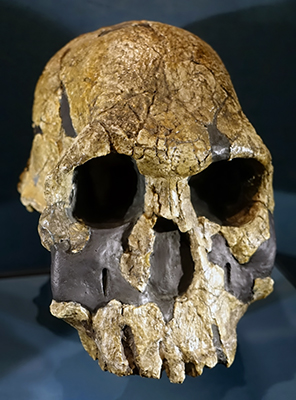 In comparison with Homo habilis, this species had a somewhat larger cranial capacity, a flatter face and forward-facing cheekbones. It is also associated with stone tools.

Original in the Kenya National Museums


Homo rudolfensis - This early human lived about 2 million years ago, but its place on our family tree is debated.

The key specimen of this species is skull KNM-ER 1470. When it was discovered by Richard Leakey's team in 1972 at Koobi Fora, it was not attributed to a species, only a member of the genus Homo. In 1986, a Russian anthropologist gave the skull the species name Pithecanthropus rudolfensis. The genus name of Pithecanthropus was later dropped and replaced with Homo.

Other cranial remains attributed to this species include the KNM-ER 1802, 1590, 1801 and 3732. Possible limb remains may include KNM-ER 1472 and 1481, but these were not found with skulls so attribution is questionable.

The species name rudolfensis comes from the location where the type specimen KNM-ER 1470 was found - Lake Rudolf, now known as Lake Turkana, Kenya.

Fossils have been found in Urhara, Malawi, and Lake Turkana in Kenya. 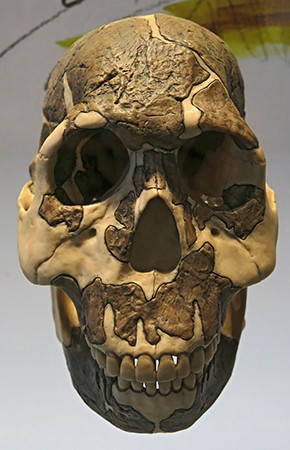 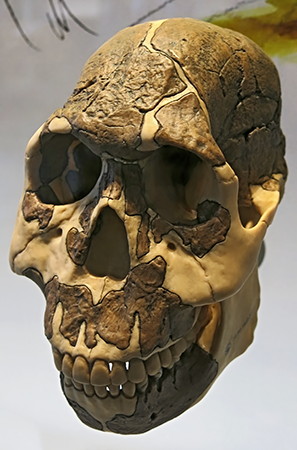 ( note that this is a reconstruction, and the facsimile has been given a full set of teeth and a mandible, probably on the basis of those from another Homo rudolfensis specimen, including HCRP-UR 501, see below - Don ) 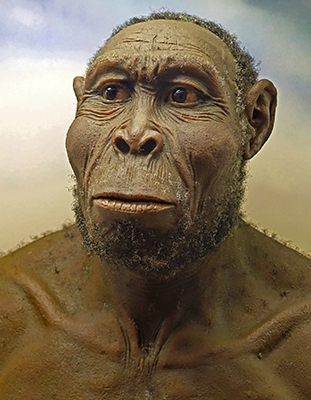 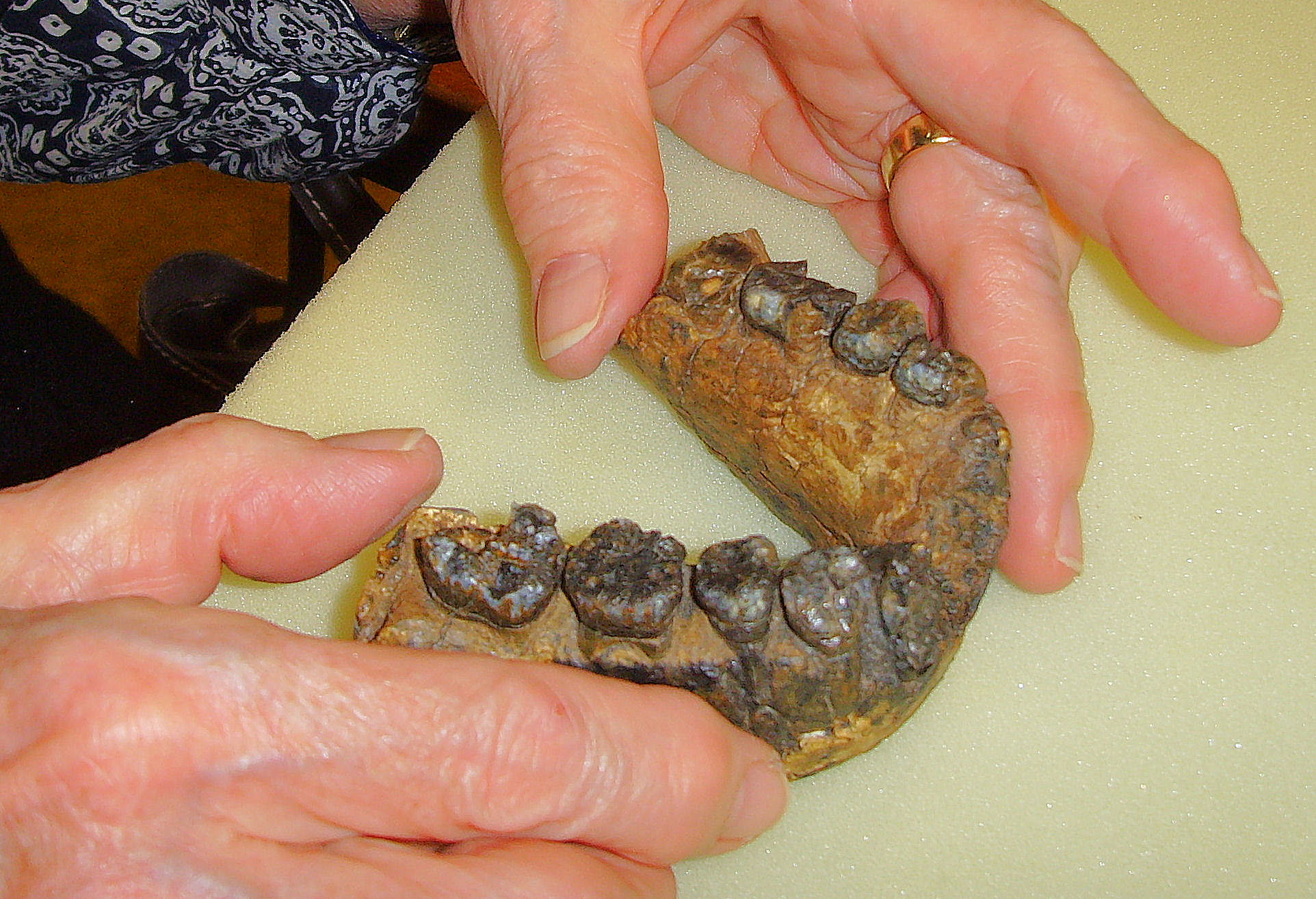 This photo was taken in Senckenberg-Museum, Frankfurt am Main, Germany. Hands of Elisabeth Vrba. UR 501 is the oldest known fossil of Genus Homo. 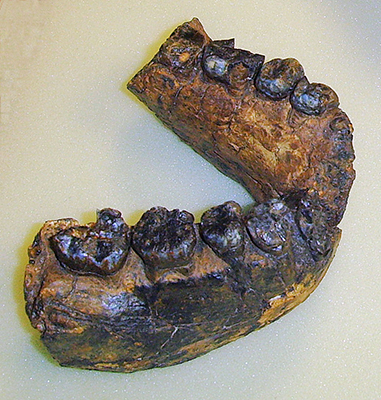 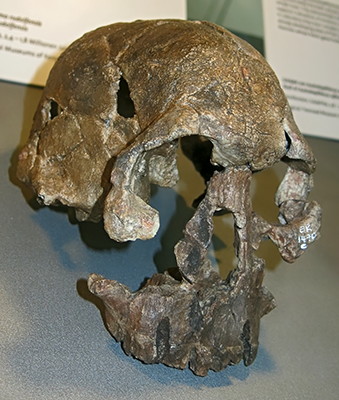 This is a reconstruction of a hominin that lived in east Africa about 1.9 million years ago. It is modelled on a famous skull known as KNM-ER 1470 which was found at Koobi Fora, Kenya in 1972. Hundreds of small, fossilised bone fragments were recovered before this work of reconstruction could begin.

The near doubling of cranial capacity that occurred with the emergence of Homo from Australopithecus was a dramatic shift, but there is more to a brain than its volume. In fact, the brain of Homo rudolfensis exhibited a new shape. The cranium was higher and rounder than in Australopithecus, standing taller above the arched brow ridges that surmounted the eyes. Although we cannot assess the relative sizes of the major lobes of the brain precisely from fossil skulls of Homo rudolfensis the elevation of the forehead from its low, sloping configuration in Australopithecus indicates expansion of the frontal lobes. The implications of this change are profound, because the frontal lobes are where humans process information and make logical decisions. As described in the previous chapter, it is here where we conduct the uniquely human function of planning for the future. Thus, it appears that the origin of Homo added human qualities of conceptualisation to what had been a much more apelike brain.

It is enlightening to portray bodily features of Homo rudolfensis through comparisons with Australopithecus, its immediate ancestor. This approach reveals that the origin of the human genus entailed more biological changes than retardation of development and enlargement of the brain. For example, the brow ridges were less massive in Homo rudolfensis than in Australopithecus, reflecting weaker jaw muscles (which attach to the ridges). The jaws were also less projecting, which is to say, the face was flatter. Perhaps reflecting the same shift, the cheek teeth of Homo rudolfensis were smaller than those of Australopithecus, whereas, at the front of the mouth, the incisors were larger and more spadelike. These facial modifications, which were generally in the direction of modern humans but did not fully reach our condition, may reflect a change of diet that reduced the need for powerful grinding. The new animal presumably specialised less on coarse plant foods that the powerful jaws and broad molars of Australopithecus would have processed more effectively.

Below the neck Homo rudolfensis appears to have been quite human in form. The pelvis from which I estimated male birth weight for this species also gives an estimate of the animal's stature. From the diameter of the hip socket, Henry McHenry estimated that the creature who unintentionally donated his pelvic bone to science stood nearly 172 cm (5 feet 8 inches) tall. This is very close to the average for a modern man, but more than 21 cm above any of the eight estimates that have been made for individuals belonging to the genus Australopithecus. Two well preserved thighbones (femora) of nearly the same antiquity as the KNM-ER 3228 pelvic bone are also assigned to Homo rudolfensis, and these turn out to be well within the size range for modem women. These two thighbones (KNM-ER 1472 and 1481a) and the pelvic bone are strikingly similar to equivalent bones of younger species of Homo. On the other hand, they contrast markedly with the corresponding bones of the stumpy Australopithecus. Homo rudolfensis we can conclude, was a full-time ground dweller that approached modern humans in stature.

I have enumerated several features that Homo rudolfensis shared with modern humans. Those located below the waist included a deeper pelvis and longer legs than Australopithecus. Those above the neck included a brain that was not only larger than that of the ancestral genus but also expanded in the frontal region. Homo rudolfensis also had narrower cheek teeth, larger incisors, weaker jaws, and a flatter face. Finally, there was a general development delay that yielded a large brain not long after birth. We can view these traits as defining features of the genus Homo.