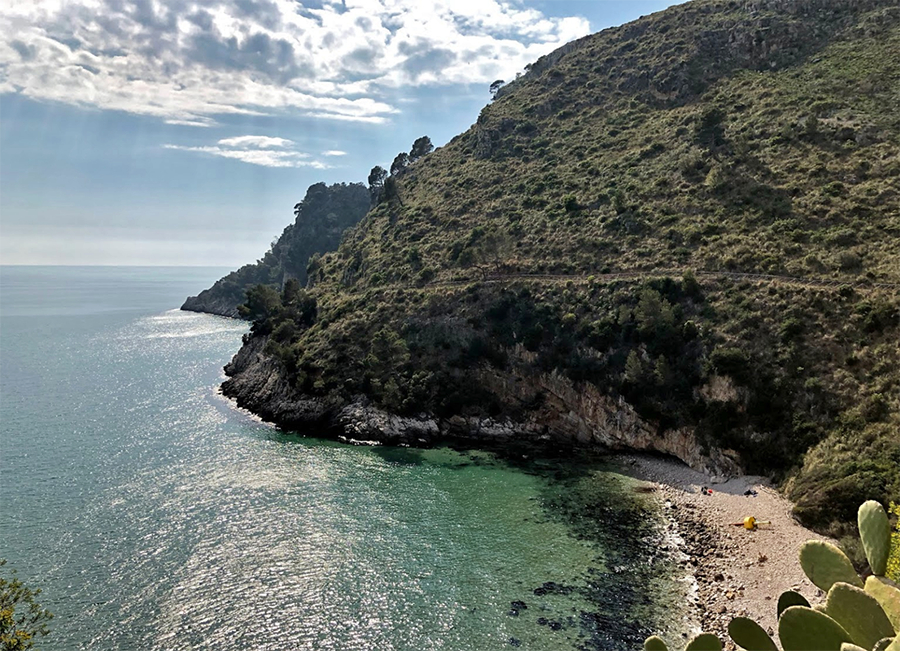 The beach of Spiaggia di Itri, less than a hundred metres from the site of Grotta dei Moscerini.

Grotta dei Moscerini is now covered with many cubic metres of waste from the building of the road in this photograph.


Neanderthals went diving for shells to turn into tools, according to new research, suggesting our big-browed cousins made more use of the sea than previously thought.

The study focuses on 171 shell tools that were found in a now inaccessible coastal cave in central Italy, known as the Grotta dei Moscerini, which was excavated in 1949. Dating of animal teeth found within layers alongside the shell tools suggest they are from about 100 000 to 90 000 years ago ( now dated more accurately to 101 000 BP - 74 000 BP - Don ) – a time when only Neanderthals are thought to have been present in western Europe. The tools had previously been thought to have been formed from shells collected by Neanderthals from the beach where they had been tossed by waves. But many do not show the wear and tear that would be expected from such a fate, such as the presence of barnacles or marks on the shells. 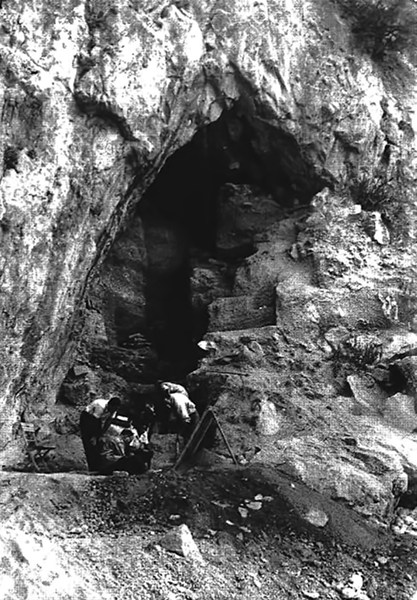 Excavations in the main trench at Grotta dei Moscerini in 1949. 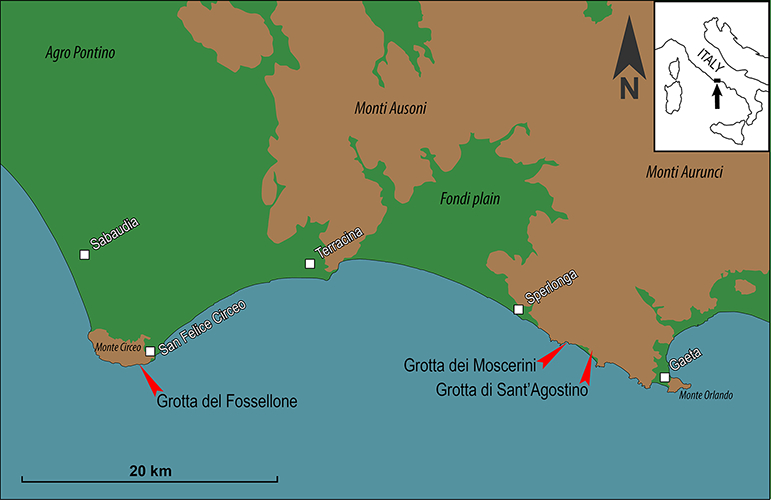 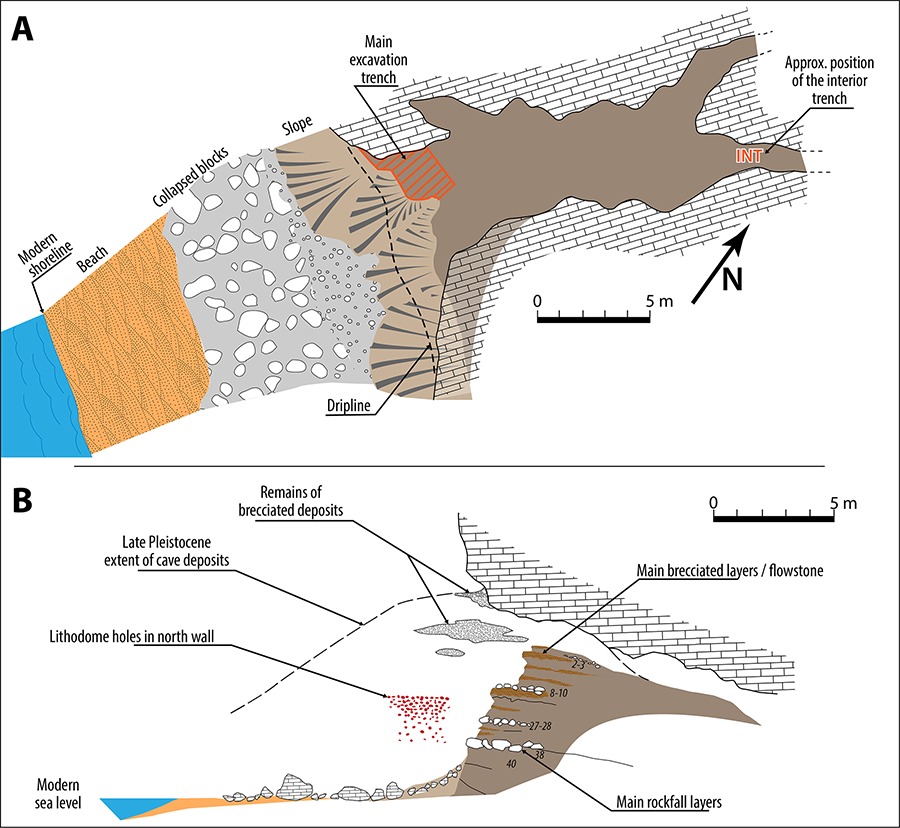 (A) Plan view of Grotta dei Moscerini. (B) Cross-sectional view of the cave with estimated extent of cultural deposits prior to the Holocene sea rise. The numbers correspond to layers in Fig 3. Drawing by Sylvain Soriano based on field drawings by the late Aldo Segre.

Assemblages accumulated by hominids. Thickness of units measured from published section.
NISP counts are for carnivores and ungulates, from Stiner (1994).

Proximal source for the table above: Hublin & Richards (2009)

Gathering of the shells from the sea floor requires wading or most often diving in shallow water. Clams can be close to the shore and their syphon makes them visible under water. They can be gathered by hand scooping the sandy bottom. Gathering by hand without breathing equipment, as Neandertals must have done, clearly cannot be as effective as dredging or scuba diving. Frequencies of Callista chione in the Moscerini layers are never very high, although at that time, in the absence of commercial exploitation, Callista populations were probably more numerous than now.

Bony growth in the external ear canal is correlated with habitual exposure to cold water. These bony growths (exostoses) are quite common on Neanderthal remains and the most likely explanation is that Neanderthals spent a good deal of time collecting aquatic resources. The archaeological evidence from Moscerini supports the idea of frequent aquatic resource exploitation based on anatomical data.

Fishing in shallow waters is also documented in the Mousterian of Castelcivita cave (Southern Italy) by remains of freshwater fish (trout, chub and eel, NISP = 21). Additional evidence of freshwater fish exploitation is provided by some French sites (Payre, Abri du Maras), Kudaro cave in the Caucasus, and Spanish sites (Vanguard and Gorham caves in Gibraltar, Bajondillo, Abrigo 3 and Nerja cave on the coast of Malaga). The most common resource in Spanish coastal sites is the mussel.

Fishing for shallow fresh water fish or collecting shells from rocky shores or coastal sandy sea floor by skin diving is a simple technology. There is an increase in aquatic resource exploitation in the Upper Palaeolithic, but a decrease in the frequency of exostoses in the external auditory canal on the UP fossils. This is possibly related to the use of more sophisticated fishing technologies such as fishhooks or barbed spears, which do not require diving. Double-pointed fishhooks are documented in the Châtelperronian and the Aurignacian, the curved ones are abundant in the Magdalenian. We have no evidence for nets in the UP but twisted fibres possibly used for cordage are documented at Abri du Maras in a layer dated to MIS4 ( circa 74 000 BP - 60 000 BP - Don ).

Other evidence of cordage with three twisted strands of vegetal fibres is from the cave of Lascaux and evidence of fibre twisting in the UP of Pavlov (Czech Republic).

Contrary to the idea that Neandertals were incapable of systematic use of coastal resource, the lower intensity of shell fishing in the Mediterranean compared to South African Middle Stone Age sites is due to the fact that the Mediterranean coasts support a lower mollusk biomass than oceanic littorals for a number of reasons. It lacks significant upwelling by which wind-displaced surface waters are replaced by cold, nutrient-rich water; the intertidal areas on the coasts of South Africa supported a good number of large mollusks (limpets, mussels) and during spring low tides their maximal exposure allowed intensive shell fishing collection. But tidal oscillations in the Mediterranean are generally of the order of few cm while on the south coast of South Africa the difference between low tide and high tide is about 1 m.

Placing bivalves on the hot embers of a fireplace will cause opening of the valves, allowing the consumption of the mollusk and causing darkening of the shell. The fact that some shells are burned (22.2% of the retouched pieces; 35% of Callista hinges) might suggest cooking and alimentary consumption of the mollusk prior to retouching of the shell but this is not necessarily so because 37.5% of the stone artefacts are also burned and many layers from 43 to 11 contain ashes and charcoal lenses. Moreover some shell pieces were burned after retouching so the hypothesis of cooking is not supported.

In conclusion, Callista clams were apparently collected as part of a routine of getting raw materials for tools. Nevertheless marine bivalves can easily be opened and eaten raw so the hypothesis of consumption of at least some of Callista chione cannot be excluded. 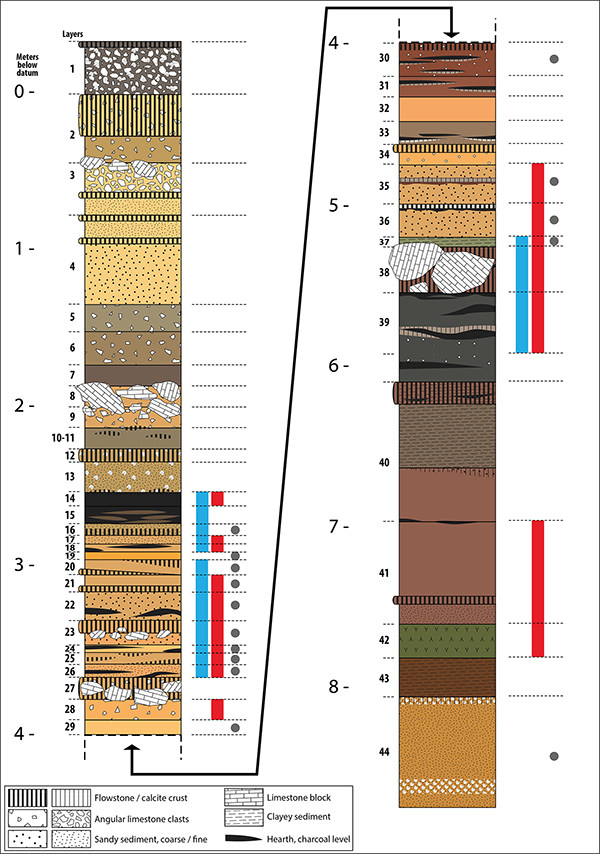 Numbers to the left are meters below datum, numbers in smaller font are layers. Red shading indicates all layers with the retouched shells described in the present paper. Blue shading corresponds to layers of which the lithic industry was analysed by us. The grey dots mark layers that contained one or more pumices. Based on Segre’s observations, layer 16, layers 35–36 and especially layer 44 contained pumices but we did not find these pumices in the material stored at Anagni. Drawing by Sylvain Soriano based on field drawings and information provided by Aldo Segre, courtesy of Aldo Segre. 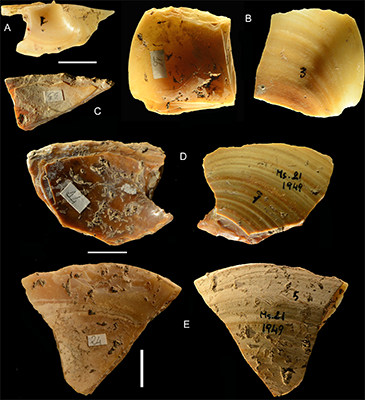 Specimens of Callista chione some gathered from the sea floor (A, B, D) and some washed up on the beach (C, E).

(A) No.74, unretouched umbo. The unabraded and shiny surface indicates that the bivalve was gathered from the sea floor.

(B) No. 16, left valve, the break to the right is posterior to the retouch but the retouched edge is complete; note the shiny dorsal surface. Pits are post-depositional, not borings due to marine organisms because they are present also in retouched areas;

(C) No. 33, the retouched edge is broken on the left side, the internal and external surfaces have an opaque, chalky appearance with dissolution indicating that the shell was washed up and collected on the beach.

(D) no. 14, mesial part of a right valve covered with postdepositional concretions and a retouched edge broken on the right side but the break is prior to retouch; the unabraded and shiny dorsal surface shows that the shell was gathered from the sea floor.

(E) No. 24, left valve with an intact portion of the fringe to the right, the left side is broken but the fracture is prior to the retouch; the eroded band following the growth lines and the opaque external surface indicate a beached specimen. 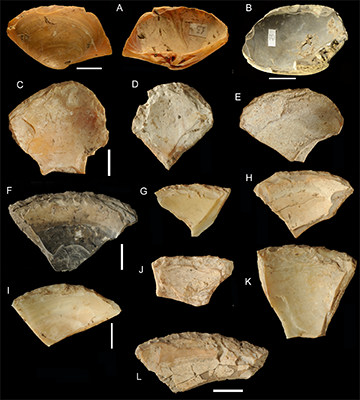 General morphology of retouched shell tools, Figs C-L are from the Pigorini Museum.

(A) No. 13, almost complete small shell preserving the umbo and the hinge. The retouched edge is on the dorsal face, a rare occurrence.

(B) No.73, almost complete shell preserving the umbo and the hinge; burnt after retouch. 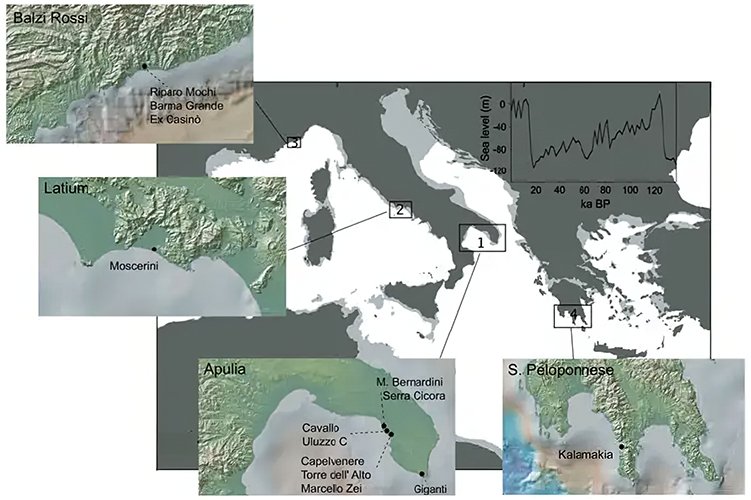 Map of Mousterian sites with identified industries on Callista chione shell. Four spatial clusters are shown. In the central map, the lighter grey line corresponds to the Mediterranean shelf at -100 m. The fluctuation of sea level during the last 120 ka is shown on the top right corner in relation to modern level (point 0). 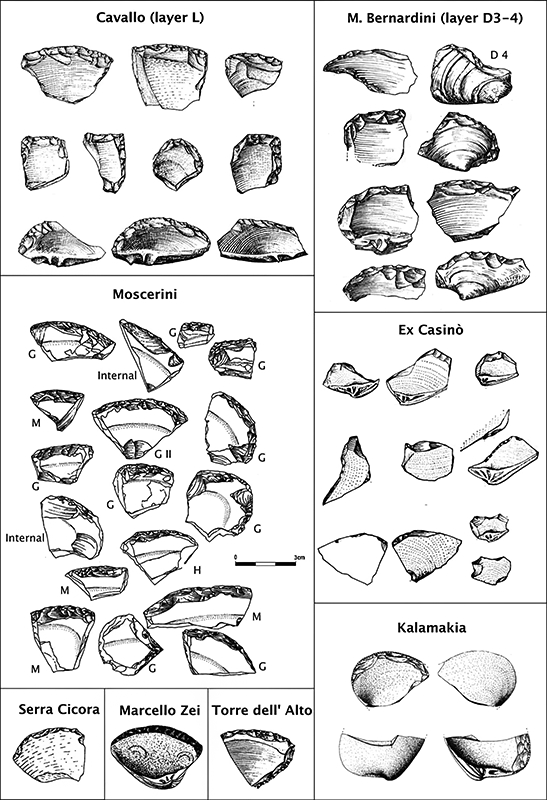 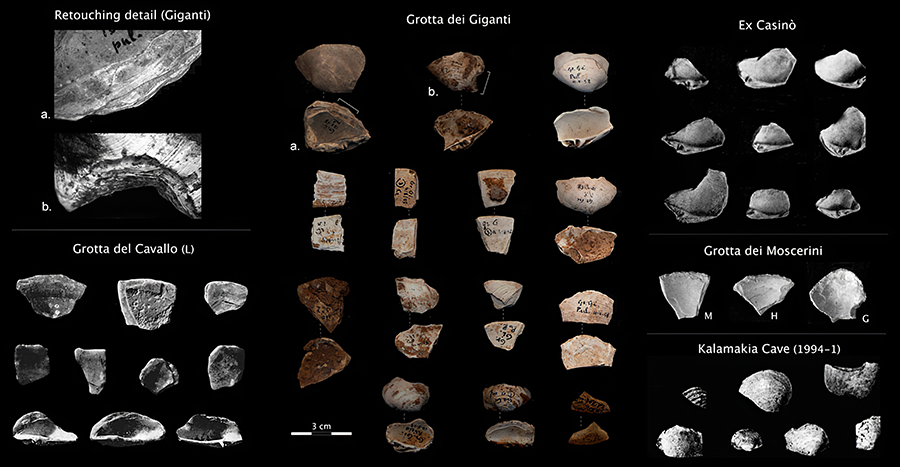 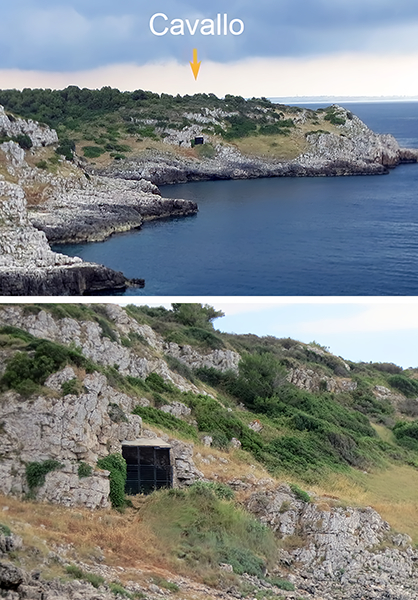 Grotta del Cavallo is so named because a stone on the top of the cave looks like the head of a horse.

The cave contains a rich stratigraphic succession with a depth of 7 m that is deposited on top of an interglacial beach foundation. The most notable section of this sequence covers the Middle Palaeolithic, associated with the Neanderthal Mousterian culture and recently discovered subsequent strata that were associated with the earliest known appearance of anatomically modern humans in Europe.

In 1964 two deciduous molars were discovered in the cave. In 1967 researchers described the teeth as of Neanderthal origin and assumed that the accompanying stone tools and shell bead ornaments were typical of a Neanderthal culture, that was subsequently termed the Uluzzi culture as it closely resembles the Châtelperronian. However, the association of the Châtelperronian culture with Homo neanderthalensis is the subject of ongoing debate. In 2011, a team of researchers led by Stefano Benazzi of the Department of Anthropology at the University of Vienna published a study in the journal Nature which concluded that the teeth are not of Neanderthal origin, but from an early Homo sapiens and date from 45 000 BP - 43 000 BP.