Back to Lake Mungo index

Mungo - The Walls of China

Panorama of "The Walls of China", the eroded lunette on the eastern side of Lake Mungo, carved into fantastic shapes by the occasional rain which falls. The average rainfall for the area is around 250 mm per year.

Panorama of "The Walls of China" four years later, taken from the same vantage point. Some erosion is evident in the interim, but not as much as I would have expected. 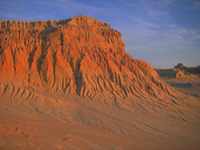 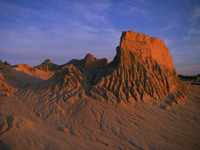 Much of the erosion is from the occasional rain which falls. Wind then moves the resulting sand and clay over the top of the lunette to the mobile dunes on the lee (eastern) side.

Walls of china in the early morning light. 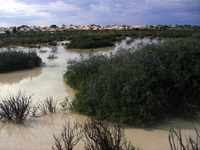 Ephemeral pool in Lake Mungo. Looking towards the lunette to the east. 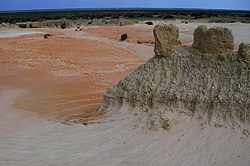 This photo illustrates well the different coloured layers of the Mungo sediments, with the flat Lake Mungo lakebed in the distance. 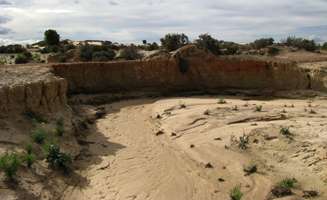 Parts of the lunette are being very actively eroded, especially by water. Note the small bush which has been undermined, and is hanging down the sand face. 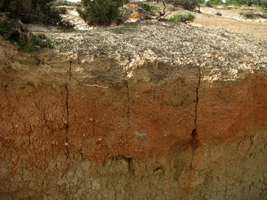 At least the erosion exposes things such as these hearths in the sand face of the photo above, with their clay balls used to help cook game in earth ovens. 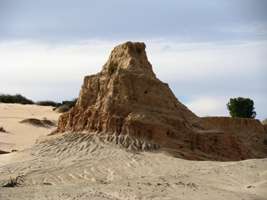 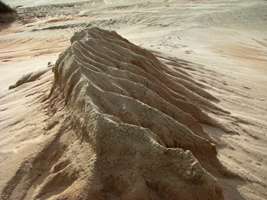 Sometimes, setting aside the earthly plants, the Walls of China reminds me of the planet Mars. It is eerily beautiful, yet at the same time a very alien landscape. 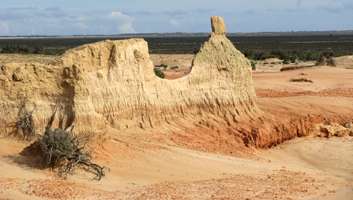 Some shapes are ephemeral, and this small spire looks certain to disappear in the next heavy fall of rain. 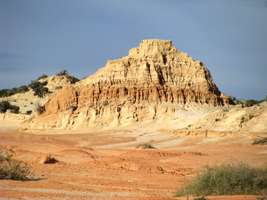 More substantial shapes may stay essentially unchanged for many years. 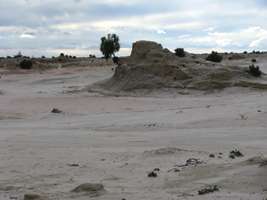 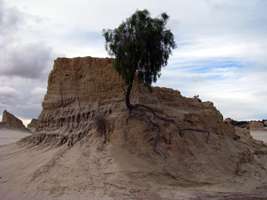 Another indication that sometimes erosion is slow is the fact that this tree obviously germinated on the side of the pillar, and has grown into a reasonably sized specimen, albeit with its roots exposed now. 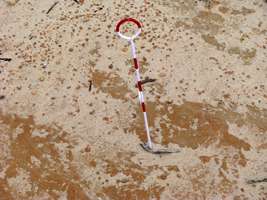 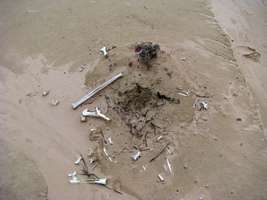 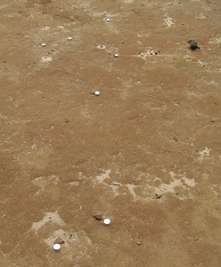 These pegs appear to have been used to record the amount of erosion in the area. They appear to have originally been pushed in flush with the surface. 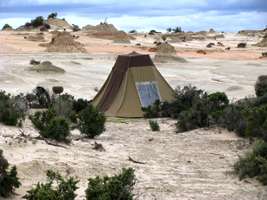 This tent appears to have been put in by park staff, possibly to provide shelter for those doing research on night time animals on the walls of china. 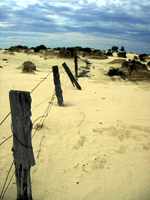 Abandoned fence not far from Vigars Well, but on the western side of the lunette. The fence posts are of cypress pine, a wood which is resistant to weathering and termites. The wood is not impervious to all agencies of decay, however, and the part which was above ground is wider and thicker than the part which was below ground - incidentally indicating how much erosion has taken place since the fence was erected.

Looking towards the south east across Lake Mungo from the top of the lunette near Vigars Well. 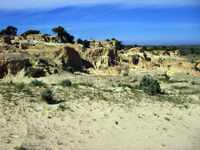 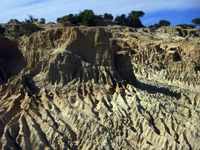 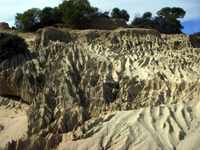 Badlands topography on the walls of china.

This white layer may be a former lake shore.

Badlands topography on the walls of china.

Plain of gibbers, or small stones.

The lines of gravel and pebbles in this area can be traced for many kilometres along the shore of Lake Mungo. They are water rolled pebbles that washed up along the shoreline and show that strong wave action, generated from frequent westerly winds, smoothed and moved pebbles and small rocks. 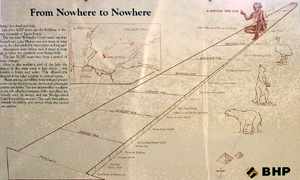 Mungo is a dead end lake. Just over 4600 years ago, the building of the pyramids of Egypt began. The last time Willandra Creek water ran this channel into Lake Mungo was not twice as long ago as that, but three times as long ago! Aboriginals were fishing here eight times as long ago as when the pyramids were being built. The last 50 000 years have been a period of many changes. Here at the northern end ofthe lake the impact of the west wind is less direct... the lunette is lower and wider. This allowed the channel fromLake Leaghur to remain open. Sheep grazing and rabbits have reduced ground cover on the slopes to some shrubs and ephemeral grasses and herbs. The few taller mallee eucalypts to the left, all which remains of the woodland are heavily used by ravens (which many people call crows) and the Wedge-tailed Eagle for nesting purposes. The eagle lives almost entirely on rabbits and carrion while the ravens live on carrion.

Dunes behind Vigars Wells. This is a high active dune, which is moving west towards the wells.

Looking south east from the top of the dunes at Vigars Wells towards the western side of Lake Mungo, across the walls of china. 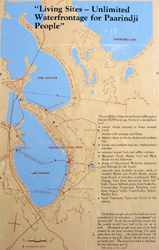 This could have been the real estate billboard on this site 20 000 years ago. However it should have read...

Until white people arrived the land was never considered to be real estate... It was never 'cut up and sold'. To do this would have meant that the people would have had to be cut up as well... Aboriginal people were part of the land created by the ancestor beings. The spirit came from the land... the flesh and bones 'all the same as the soil', blood 'all the same as the sap in the tree'. The dead went back to the land.

As one Aborigine put it:

Water levels in Lake Mungo varied a lot. There are three gravel layers in this area (only Zanci is visible) representing three major lake filling events between 55 000 and 22 000 years ago.

The line of gravel before you is the most recent shoreline at Lake Mungo. It is called the Zanci shoreline gravels and represents a brief high water phase from 22 to 24 000 years ago. After this Lake Mungo dried and rarely refilled. Other lakes in the north of this region have held water more recently.

A horizontal line drawn from this gravel shoreline to similar gravels near the Mungo Visitors Centre shows the depth of water in Lake Mungo was about eight metres.