I've been here! I know this place!' Amelana said. She was so excited to see one familiar place, and then another, she couldn't erase her excited smile. There was no stopping to rest now; pregnant or not, she could hardly wait to get home. The small group of travellers approached a well-marked trail that wound around a sharp U-shaped bend in the river. An old floodplain had left a broad, level grassy field somewhat above the swiftly flowing water that ended abruptly at the base of a steep cliff. A nice place for horses to graze, Ayla thought.


This page is a cooperative effort by AnnDee and myself. Her encyclopaedic knowledge of the books was a huge help while we were sorting out the details of this part of the journey. 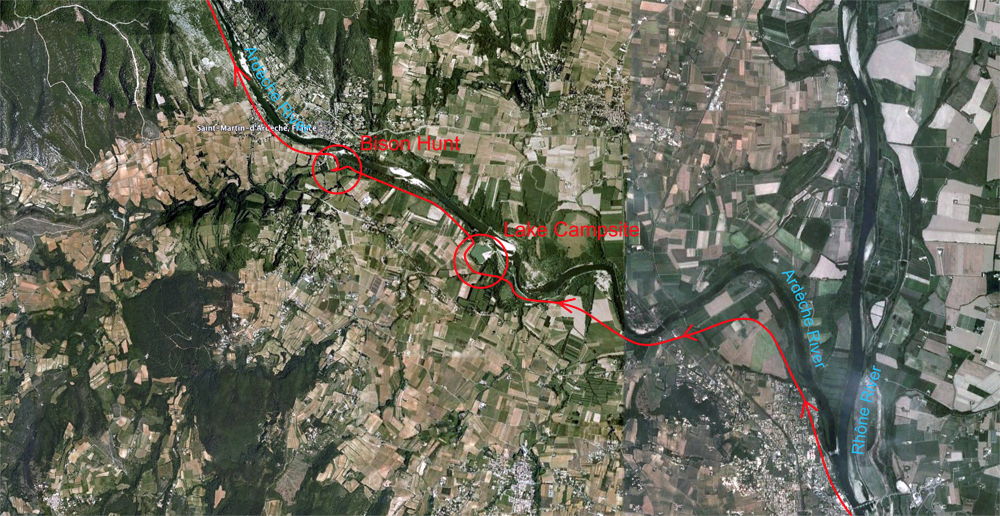 On the last part of the Donier tour, the party followed the Rhône upstream until they came to the point where the Ardèche comes in from the north west (not the northeast, as in the book). They then followed the Ardèche upstream for four miles until they neared the gorge for which it is famous, and in which is Chauvet Cave, the Most Ancient Sacred Site.

They set up a campsite at a lake beside the Ardèche and some of the party saw a small herd of bison. They followed the river upstream until they found a dry streambed a little over a mile away, with relatively high sides, one which only had significant water in it at snowmelt, now called the Valat d'Aigueze. After preparing the weapons and tools needed for a major hunt, they were able to drive the bison into the stony creekbed, and had a very successful hunt, killing nine bison.

They butchered the animals and prepared them for transport, struck camp, and then set off up the Ardèche, entering the gorge on their way to Amelana's Cave, the Third Cave of the Zelandonii That Watches Over the Most Ancient Sacred Site. 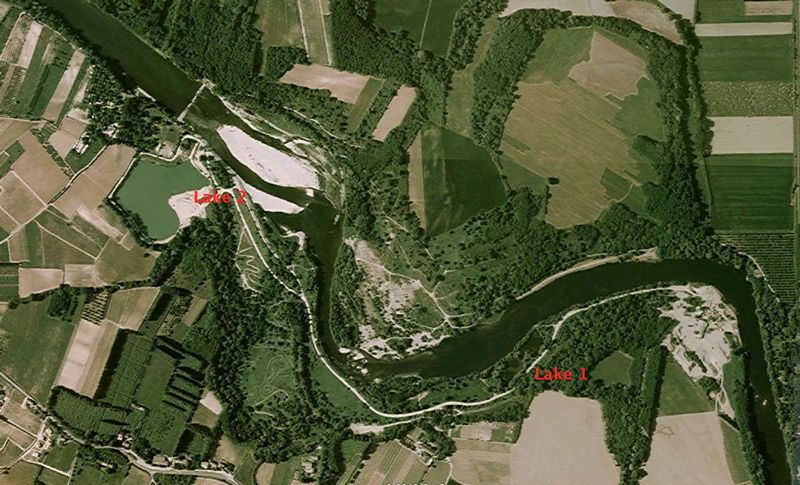 There were just two candidates for the campsite by the lake, lakes 1 and 2 as shown here, but Lake 1, actually two tiny lakes with a channel connecting them, was too small to fit well into the story.

Lake 2 is not at present in good condition, it appears to be covered with a blue-green algal bloom as a result of nitrate runoff from the farmland around it. 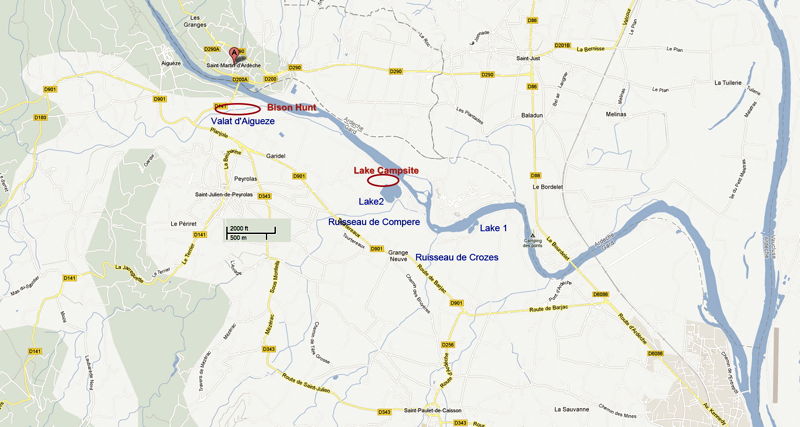 The most likely place for the bison hunt is the small stream of Valat d'Aigueze. The other two streams shown are too small to have a creek bed suitable for a bison hunt, and in any case are too close to the Lake Campsite, and are downstream from it, not upstream as required by the story.

The part of the Valat d'Aigueze I have marked is the most likely to have the high banks needed for the story line. It is 1.25 miles from the Lake Campsite, which itself is four miles from the confluence of the Ardèche and the Rhône. 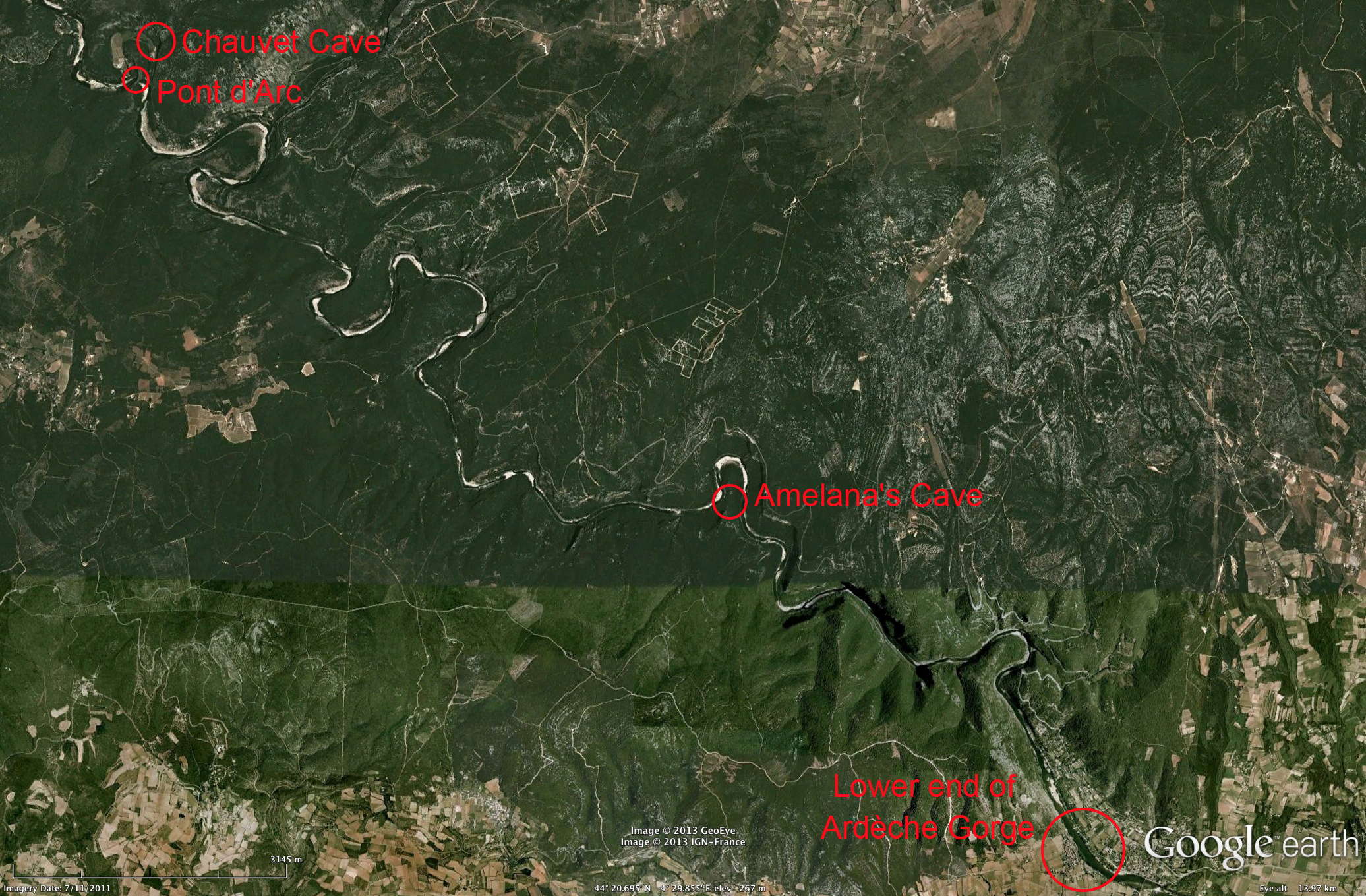 Photo showing the entry to the Ardèche Gorge and the positions of Amelana's Cave, Pont d'Arc, and Chauvet Cave. 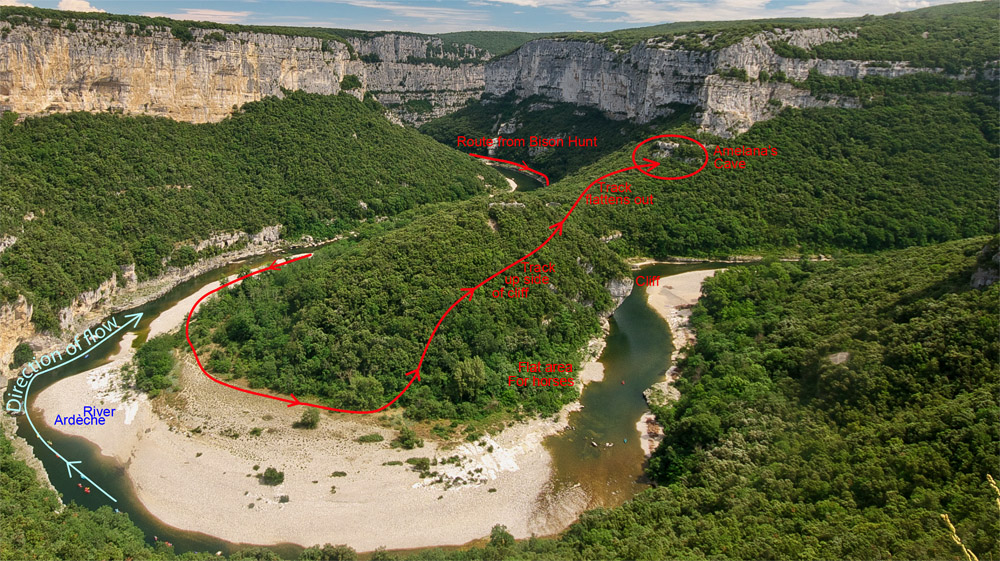 Route from the gorge floor to Amelana's Cave, the Third Cave, at the bend in the river known as Cirque de la Madeleine.

There are many photos like this available on the net, since the lookout and parking area beside the road on the opposite bank has a spectacular view of this feature, which includes the ruins of buildings said to be a 12th Century hospice for people who returned from the Crusades having contracted leprosy. These ruins are situated on the relatively flat part of the ridge of the Cirque de la Madeleine. It may be that Jean stopped at this lookout, and decided on the site for Amelana's Cave using a powerful pair of binoculars.

The ruins are known as Maladrerie des Templiers, though there is some dispute as to whether the Templars were ever involved in this hospice for lepers. 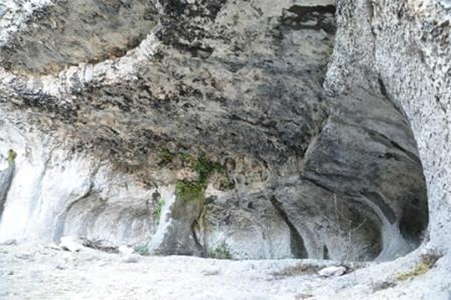 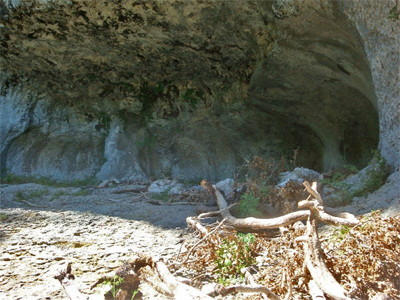 Amelana's Cave, the Third Cave. It is 6.5 miles from the site of the Bison Hunt, and it is ten miles from here to Chauvet Cave.

There is now a walking circuit from the nearby village of Le Garn which passes by this feature. 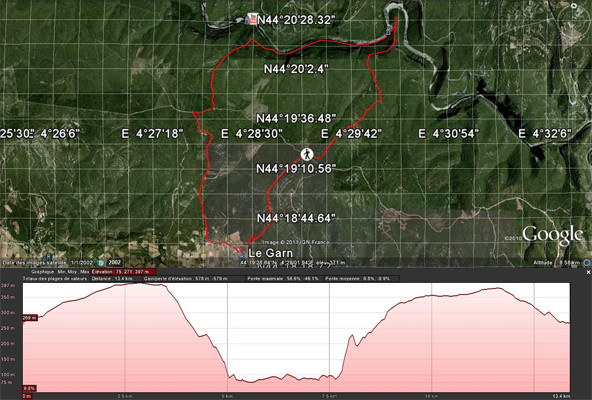 The circuit is usually completed in a clockwise direction, and drops down to the Ardèche, travelling beside it downstream before ascending la Cirque de la Madeleine, visiting ruins of the hospice, and taking a narrow path beside a cliff back up to the plateau and the village. It looks like a great walk, I'd love to do it myself. The source for the photo, http://www.rando-sud-est.com/2011/08/13/la-maladrerie-des-templiers/ , has an excellent series of photos detailing the walk. 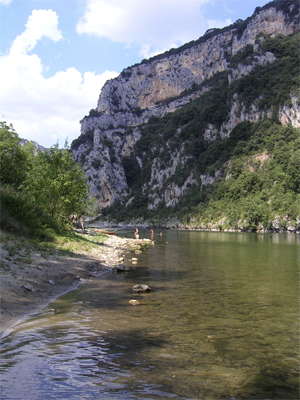 This river is usually only a metre or so deep, so this would not have presented many problems. 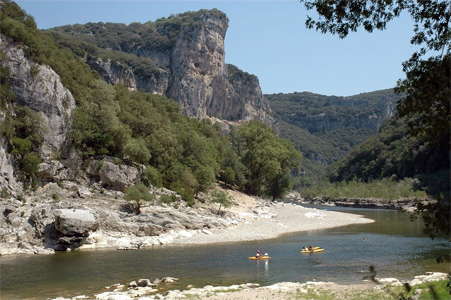 Another photograph, further upstream at la Chataîgneraie, looking downstream, shows the shallow river which is relatively safe for kayakers in good weather conditions. Campers and kayakers flock to the region in the summer, for obvious reasons. The complete trip of 30 kilometres by kayak from the Pont d'Arc to the end of the gorge is usually done over two or three days. 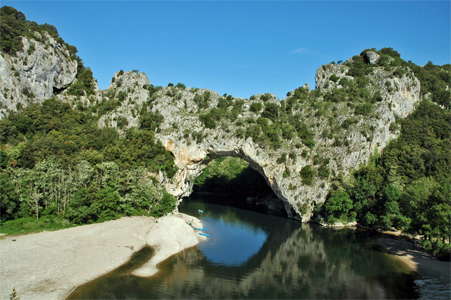 The Pont d'Arc was formed about 500 000 years ago, when the Ardeche cut through an incised meander. At 60 metres wide and 54 metres high, it is the largest natural bridge in Europe, and forms a natural entrance to the Ardèche Gorge. 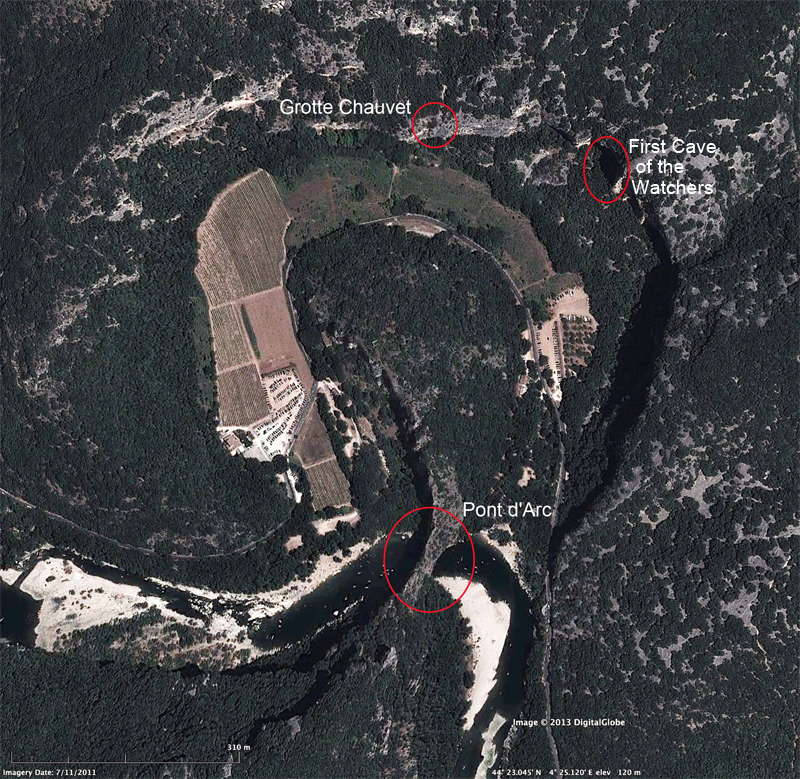 Google Earth image showing Chauvet Cave and the First Cave of the Watchers. 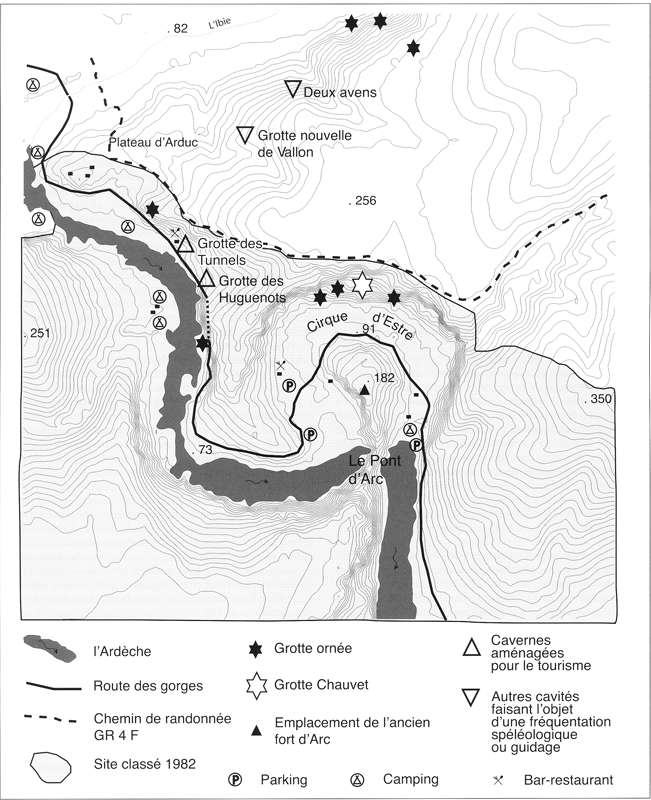 Topographic map of the Chauvet region.

It is important to realise that there are three decorated caves (smaller dark stars) right beside Chauvet Cave (large white star).

It would be good to get more information on these caves.

Note that this topographic map is not particularly accurate with regard to the line of the road around the Cirque d'Estre, nor with regard to the position of the restaurant and parking area to the north-west of Pont d'Arc. Compare with the Google Earth image below. 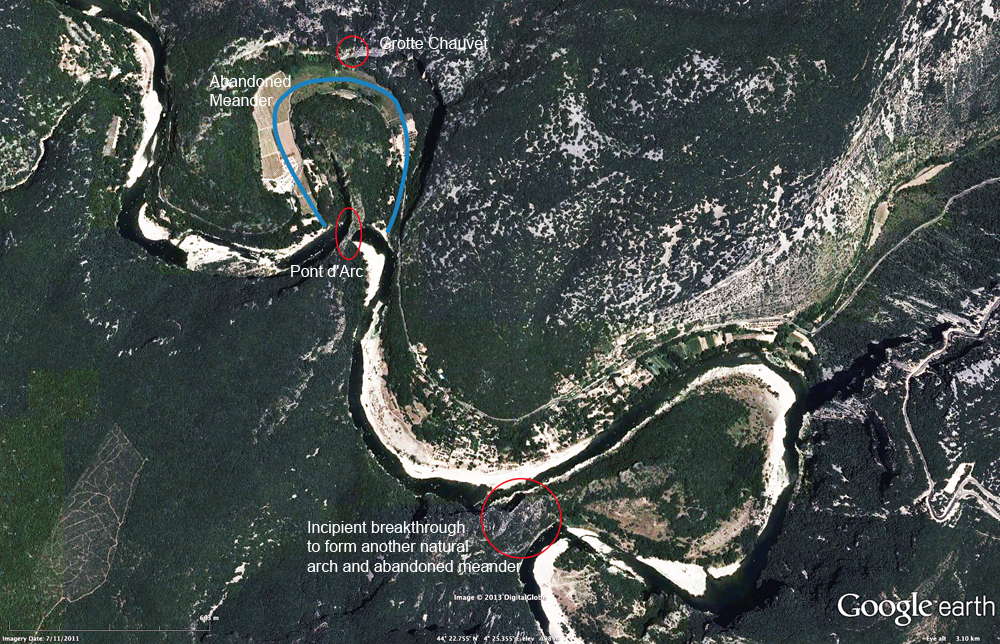 This aerial shot allows us to see the general layout of the site in its setting. Chauvet Cave is in the cliff on the outside of an ancient incised meander, cut off some hundreds of thousands of years ago when the river took a short cut at its neck, through the natural stone arch of Pont d'Arc formed at the time of the breakthrough. The area of the abandoned or cutoff meander has since silted up to form farmlands. A very narrow necked incised meander further downstream will suffer the same fate, some hundreds of thousands of years from now.

Photo: adapted from Google Earth, utilising the information in a similar photo in Clottes (2003)

For further information about Chauvet Cave itself, go to this page. Chauvet Cave is filled with paintings, engravings and drawings created more than 30 000 years ago, of cave lions, mammoths, rhinos, bison, cave bears and horses. It contains the earliest known cave paintings, as well as other evidence of Upper Paleolithic life. It is situated on a limestone cliff above the former bed of the Ardèche River. The later Gravettian occupation, which occurred 25 000 to 27 000 years ago, left little but a child's footprints, the charred remains of ancient hearths and carbon smoke stains from torches that lit the caves. After the child's visit to the cave, evidence suggests that the cave had been untouched until discovered in 1994. The footprints may be the oldest human footprints that can be dated accurately