Cuina Turcului is the only rock shelter in the Iron Gates gorges, and is the the oldest site in the gorges (most of the others are mesolithic, rather than late palaeolithic) and it is on the true left (northern) bank of the Danube. It was situated at about 8 metres, around 26 feet, above the original water level before the Iron Gates Dams were put in. The earliest dates for human use are at around 12 600 years before the present. The site was first excavated by the distinguished Romanian archeologist Dr. Vasile Boroneant. 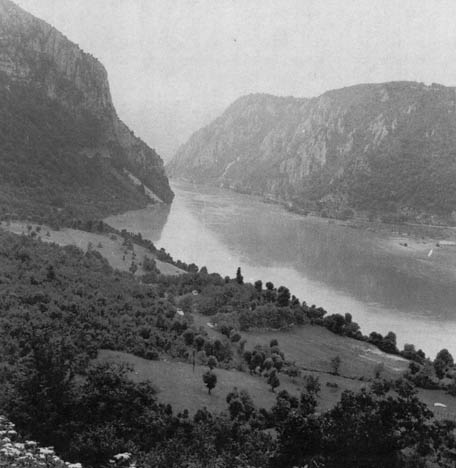 A view of the Lower Gorges. In the background is Veliki Kazan (Large Cauldron) Gorge with the Strbac Massif on the left, and the Ciucarul Mare Massif with caves and rock shelters (Veterani, Climente I and 11, Cuina Turcului) across the river on the right. .
Photo: The Iron Gates Mesolithic, I. Radovanović 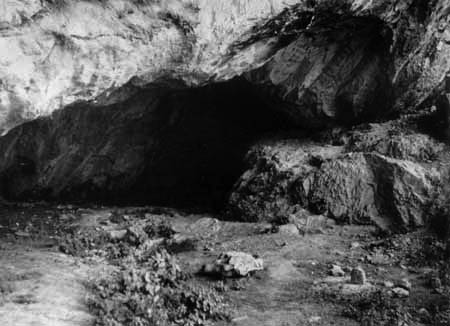 Map of the Iron Gates region, with the position of Cuina Turcului marked. 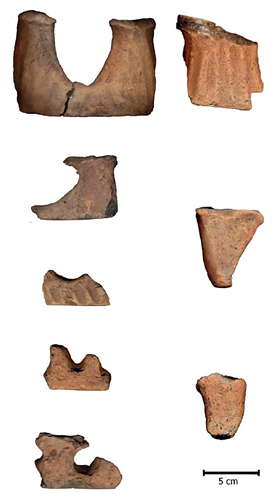 The abstract of a paper on the altars found at Cuina Turcului by Jacobsson and Boroneanţ (2010) appears below:

The 1960s rescue excavation at the rock shelter of Cuina Turcului uncovered a large collection (over 100 specimens) of altar-pieces of Starčevo-Criș origin. The present paper investigates how and if these artefacts appear to create various zones of deposition on the terrace in front of the rock shelter or inside it and also if they provide evidence of mutual reinforcement of technological and 'ritual' choices.

Furthermore, they demonstrate the unusual character of the site, through high counts of endemic design forms and, conversely, extremely low counts of better–known types.

Whilst the results are still highly preliminary they highlight both the importance of intra-site analysis in Neolithic studies, as well as the variation with the Starčevo-Criș culture.

Photo and text: Jacobsson and Boroneanţ (2010) 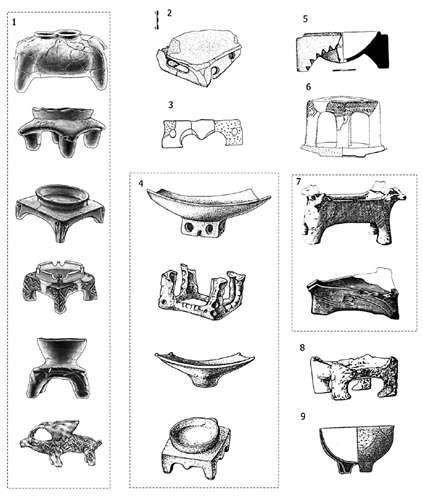 For comparison, here are several types of altars from similar cultures in the same general area:

Photo and text: Jacobsson and Boroneanţ (2010) 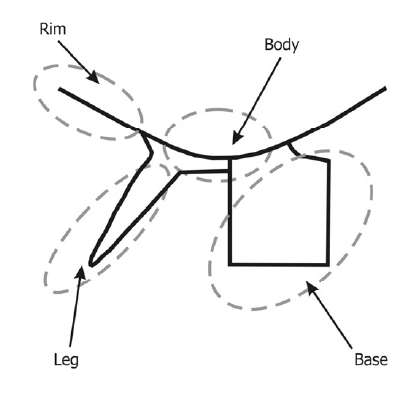 It is useful to have nomenclature for the various parts of an altar, as used by these cultures.

Note that the support for the altar may be either a leg or a solid base. 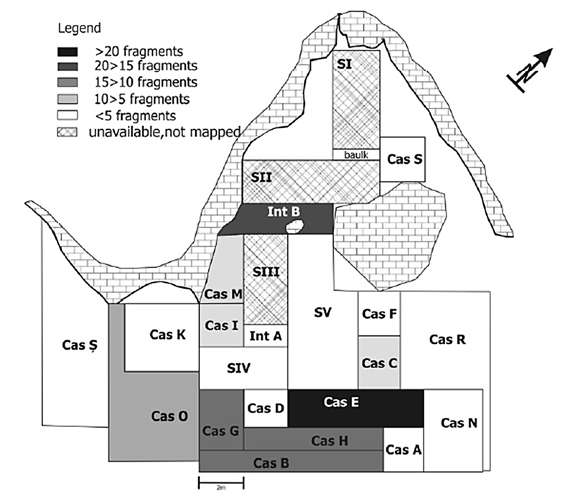 Plan of the excavation at Cuina Turcului.

The following information is taken from the excellent monograph 'The Iron Gates Mesolithic' by Ivana Radovanović:

Cuina Turcului is situated in the Ciucarul Mare Massif between Moara Dracului and Proluca hill. The Epipalaeolithic living floors were excavated between 1964 - 1969 over an area of 160 - 180 sq. m.

A few hearths were discovered, some of them several square metres in area, with burned bones, charcoal and ashes. 0.10 - 0.20 m thick.

From the Epipalaeolithic, the chipped stone industry was made up of Flint 96.8%, obsidian 3% and quartz 0.2% A great number of chipping by-products point to manufacture on the spot. In the earliest deposits, the types of tools were end scrapers on flakes, circular and thumbnail scrapers, retouched bladelets, 'Azilian' points, and splintered pieces.

Plaques of siltstone with traces of red ochre were found.

The bone industry consisted of awls and projectiles-spears, with one fragment of a harpoon discovered, as well as an awl with traces of red ochre. 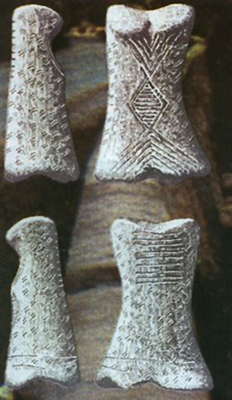 The bone is decorated front and back, and is covered with small paired incisions as decoration.

There were no traces of burial practice, but two human molars, and several human bones and teeth were found. 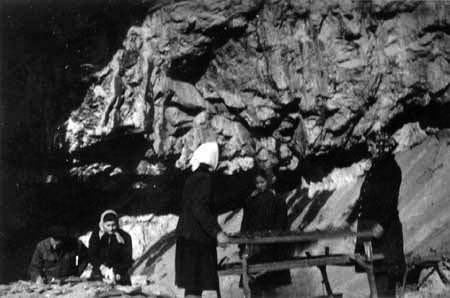 At work at Cuina Turcului during the archaeological excavations made between 1964 - 1969 by a team led by C. S. Nicolescu Plopar, V. Boroneant, M. Davidescu, St. Roman, Al. Paunescu

This shows the workers sieving the material excavated to recover such things as stone tools.
Photo: http://cimec.cilea.it/livingpast/nr1/boroneant/clisurian/fig8.htm


Pollen from Pinus diploxylon (60% of the pollen diagram) was found. 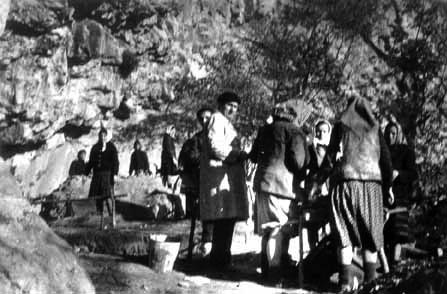 At work at Cuina Turcului during the archaeological excavations made between 1964 - 1969 by a team led by C. S. Nicolescu Plopar, V. Boroneant, M. Davidescu, St. Roman, Al. Paunescu
Photo: http://cimec.cilea.it/livingpast/nr1/boroneant/clisurian/fig8.htm

Epipalaeolithic: Molars from Level 1 belong to an adult, the remains of bones and teeth from Level 2 belong to a child and three adults (male, robust female, and a gracile skeleton) all of Cro-Magnon type.

- Phase I of the Iron Gates Postglacial and Early Holocene industries - with Climente II, Veterani Cave, and Baile Herculane (Radovanovic).

- Phase II of the Iron Gates Postglacial and Early Holocene industries - with Padina A1 - A2 and Ostrovul Banului I (Radovanovic).

The palynological analyses from Cuina Turcului ( provide at the moment our only picture of the development of vegetational phases over a larger (although discontinuous) time scale. The samples were taken from all strata, at intervals of 10 centimeters, down to the bottom of the rockshelter.

Plan of the excavation at Cuina Turcului, according to V. Boroneant, completed by Al. Paunescu.
Photo: http://cimec.cilea.it/livingpast/nr1/boroneant/clisurian/fig9.htm


The Early Epipaleolithic - Cuina Turcului I

The first pollen spectrum is reconstructed from the base of the section (depth 5.80 m). it represents the final stage of preboreal pines, with a large representation of Pinus of Diploxylon type (60%), followed by Pinus sylvestris and Pinus pallasiana. These typical traits of the final stage of a colder period are confirmed by the large fragments of rocks fallen from the roof of the rockshelter, due to intensive frost action. Alongside the dominant pine, mixed oak forest appears, especially with lime, while willow and hazel are less frequent. Grasses are represented by Poaceae (i.e., Gramineae), and among the herbaceous plants are Cfienopodiaceae and Asteraceae, without Artemisia.

The authors of this analysis (Pop, Boscaiu and Lupsa 1970:31) pointed out the discontinuity of the spectrum. The large presence of thermophilous (warmthloving) species within the mixed oak forest (37%) with 27% of lime trees signifies an amelioration of the climate. The low altitude of the rockshelter (65 m a. s.l.), its geographical latitude (44' 30'), and its exposure to the northeastern wind could explain the presence of thermophilous species due to the microclimatic conditions thus established.

Firstly, Cuina Turcului is firmly in the Gravettian - Epigravettian/microlithic tradition with a large number of backed blades and bladelets and geometric microlithic tools. Secondly, various exotic and local raw materials entered the site and all were treated more or less alike. Blank production on both exotic and local materials occurred at the site although initial shaping of cores probably occurred often off the site (especially in level 2). Thirdly, raw material usage became more diversified over time with the grey radiolarite decreasing in importance and exotic, high-quality materials such as Carpathian One obsidian and Balkan flint increasing. And although the use of raw materials became less special- ized over time the typological toolkit became more specialized with a larger number of formal tools, more tool types and more composite tools.

Finally, the trend at Cuina Turcului would not support standardly accepted chronologies for the Iron Gates. In particular, the accepted 'evolutionary' trend for lithic technologies, evolving slowly from the Epigravettian to the Schela Cladovei - Lepenski Vir 'culture', best articulated by Radovanović (1981), is a shift from a curated to an expedient technology; an abandonment of high-quality materials towards the use of immediately available pebbles, is radically in opposition to the findings presented here. Cuina Turcului level 2 in no way indicates a shift to an expedient technology using immediately available pebbles.


No = number of bones
MNI = Minimum Number of Individuals

MNI represents an attempt to work out how many different animals there are in a deposit. If there are three skulls, for example, then there are obviously three separate animals. However if for example a left thigh bone and a right thigh bone are found in distinct layers, it is also reasonable to allocate them to different animals, and count them as two individuals. This is important when trying to work out the role of various animals in the economy of the site. The MNI is artificially reduced if careful excavation procedures are not followed. In addition, smaller animals are under represented if the deposits are not sieved.

No = number of bones

Back to the Iron Gates