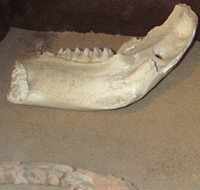 The whole of the Willandra Lakes system is an extremely sensitive and spiritual place for the Barkindji people. It was the scene for a great many stories, initiations, dreamings and day-to-day activities. One of the Barkindji spiritual links to the Willandra Lakes is Bookamurra, the giant kangaroo. Barkindji warriors tracked Bookamurra for days and finally caught and killed the giant kangaroo at the southern end of the lakes.

The lake system and surrounding area is the actual remains of Bookamurra. This is one of many traditional links that bond Barkindji people to this very special and spiritual place.

Procoptodon goliah - the largest of the leaf-eating kangaroos (200kg) could stand on tiptoe, prop on its tail and reach leaves up to three metres from the ground. The skull is short and deep, an indication it had enough power in its jaws to grind up very tough leaves.

From: Text below from The Mungo National Park Draft Plan of Management

Conservation of Cultural and Natural Heritage

Mungo National Park and the surrounding Willandra Lakes Region are of international significance for both natural and cultural values. In respect of this outstanding natural heritage, it is the area's record of climate and landscape evolution during the Pleistocene and Holocene that make it unique. Mungo landscape reads like an open page of the past two million years; it is a geomorphological record unparalleled in Australia.

The park lies within the Lower Murray-Darling Basin, a landscape of little relief a mere 60 to 100 metres above sea level. The underlying Tertiary sediments of sand and mud, that were washed down from the south-eastern highlands, are overlain by aeolian Pleistocene deposits. As the rivers draining the eastern highlands, the Murray, Murrumbidgee and Lachlan, changed their course in response to fluctuating flows and shifting sand dunes, the Willandra Creek, a tributary of the Lachlan, was blocked and the Willandra Lakes System formed about 400 000 years ago. The lakes underwent a sequence of fluctuating water levels and the prevailing westerly winds steadily built lunettes on the eastern shores of the lakes. These fluctuations in flows and lake levels were brought about by climatic changes, including periodic glacial fluctuations in the south-eastern highlands.

A large proportion of the park consists of playas and basins of the relict lakebeds of Lake Mungo, Leaghur and Garnpang and their associated lunettes, surrounded by undulating sandplain and dunefield landsystems.

The lakebed soils are a mosaic of grey and red heavy clays and in places contain channels and gilgais. The Mungo lunette, 'The Walls of China', is mostly loosely cemented whitish sands and well consolidated clays, exhibiting considerable gully erosion. The Leaghur and Garnpang lunettes have only suffered minor erosion and have abundant vegetative cover.

The undulating sandplains consist of calcareous loamy to sandy loam red and brown soils with isolated depressions of grey clays.

The most famous of the lake lunettes is the crescent shaped Mungo lunette, 'The Walls of China. It was formed during the millennia of fluctuating lake levels as westerly winds swept sand and red dust from the lake shore and from the plains to build up on the lake's eastern shoreline. From about 45 000 years ago the evidence of Aboriginal occupation and usage of the lacustrine environment began to be evident in the layers of the lunette; as were the remains of some of Australia's megafauna species. The depositional layers of the Mungo lunette have been named after the local pastoral stations Gol Gol, Mungo and Zanci; and were deposited in that order. The upper two contain a vast amount of evidence of human occupation including hearths, middens, stone tools and burials; as well as megafaunal remains including: Zygomaturas trilobus, the worlds largest marsupial; Genyornis newtoni, a large emu like flightless bird; Procoptodon goliah, a giant kangaroo; and Protemnodon, another of the large kangaroos.

Another notable find within the lunette was evidence of a geomagnetic excursion that had hitherto been unrecorded and is now known as the 'Mungo Excursion'. The evidence of a deviation in the Earth's magnetic axis of 120 degrees from its present came from clay heat retainers used in Aboriginal fireplaces.

The accelerated erosion of the Mungo lunette which was largely brought about by European pastoral activity and introduced species such as rabbits, has sculpted the lunette to its present shape. This erosion uncovered the treasure trove of materials which made 'The Walls of China' so well known and precipitated its world heritage status, as well as creating its scenic landforms.

Wind, and to a lesser degree water erosion, still affects all the geomorphic units within the park. Whilst erosion is a natural process and dunes in the semi-arid landscape naturally move over time, any unnaturally caused or accelerated erosion is undesirable.

Text above from The Mungo National Park Draft Plan of Management