Venus of Zaraysk / Зарайск Венера, part of the Kostenki-Willendorf culture

The Zaraysk venus is not voluptuous, which puts it with the 'thin' Kostenki - Avdeevo venuses, but in this case there is one difference, that the legs are not placed together, which is also the case for the Willendorf venus. This testifies to the uniqueness of the Zaraysk site, which has features of both the Kostenki and Avdeevo cultures. Zaraysk or Zaraisk or Зарайск is an important Paleolithic site from the Ice Age in Russia, and is the northernmost example of the Kostenki - Avdeevo culture. The site dates to between 22 000 and 16 000 years ago. The inhabitants were living in a peri-glacial tundra environment, but could call on the rich flint and animal resources of the area at that time. Wood was scarce, but flint, bone and ivory were plentiful, so that raw materials for food, fuel and tools were readily available. 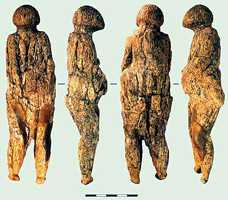 A discovery was made in 2005 which confirms the grouping of Zaraysk with the Kostenki-Willendorf culture. In storage pit (pit 116) of the second phase a venus figurine was found, made from mammoth ivory, as well as a part of an analogous statuette. 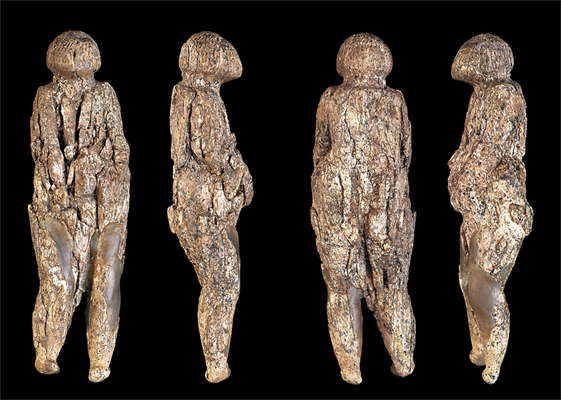 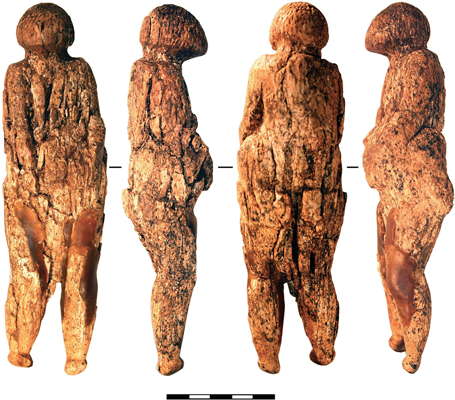 Figurine No. 1 was found in a storage pit (pit 116), situated in the central part of a large habitation structure of ‘Kostenki’ type and relating to the second phase of occupation (Figure 4). The pit was located in a space between the central line of hearths and the internal edge of an arc formed by some of the deep hollows, termed ‘earth-dwellings’. The figurine was lying horizontally on its back, with legs adjoining the rim of the pit and its head towards the centre of the pit. Beneath the figurine and extending southwards there was a lens of light, fine grained sand, and some 3-4cm to the north of the figurine’s head there was a lens of red ochre, 11cm in length and up to 4cm in width. The object had been carefully placed in the pit when it was about a third full of soil, and a mammoth scapula had apparently been placed over the pit at the same time. The figurine’s overall preservation is poor. Its head and legs are the best preserved parts; they even show traces of polish. The figurine’s head is particularly accurate in shape; it was made by short regular vertical cuts, imitating a sort of coiffure or a cap (Soffer et al. 2000). The figurine is related to the ‘Avdeevo’ style (Gvozdover 1995).

The style of this variety of figurines is referred to in the literature as Avdeevo. It is characterized by a faceless sculpture, inclination forward and head down, a standing posture with a relatively vertical orientation of the back and legs to knee level or slightly below.

Dr Amirkhanov and Sergey Lev excavating the Venus statue in 2005.

The Zaraysk venus is not voluptuous, which puts it with the "thin" Kostenki - Avdeevo venuses, but in this case there is one difference, that the legs are not placed together, which is also the case for the Willendorf venus. This testifies to the uniqueness of the Zaraysk site, which has features of both the Kostenki and Avdeevo cultures. 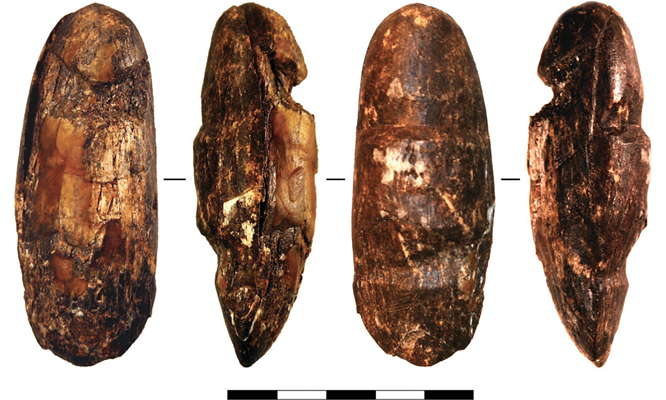 Figurine No. 2 is also presumed female, but incomplete. It was found near the first figurine, in another storage pit (pit 117), also covered by a mammoth scapula. The figurine was lying horizontally on its back in the southern part of the pit, parallel and adjacent to the rim of the pit.

As before, there was a thin lens of light, fine-grained sand below the figurine and extending southwards, and some 3 - 4 cm to the north of the figurine’s head there was a horizontal layer of red ochre of 11×4 cm.

The preservation of the figurine’s external surface was better than that of Figurine No. 1, but the structure of the material turned out to be damaged. It is not easy to give a definite stylistic-typological attribution to an unfinished object of this kind. However, the profile and proportions of the figurine lead one to consider it morphologically and artistically close to figurines of the 'Avdeevo' style. 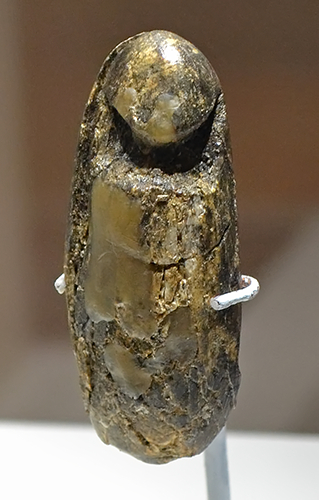 Female figurine No. 2 in the Zaraysk Kremlin Museum. Found during archaeological research of the Zarayskaya site.