Map of the Wurm and Riss Glaciation in the headwaters of the Donau (Danube) and Rhein (Rhine) rivers in Southern Germany.

Many thanks to Thalion who provided the information. 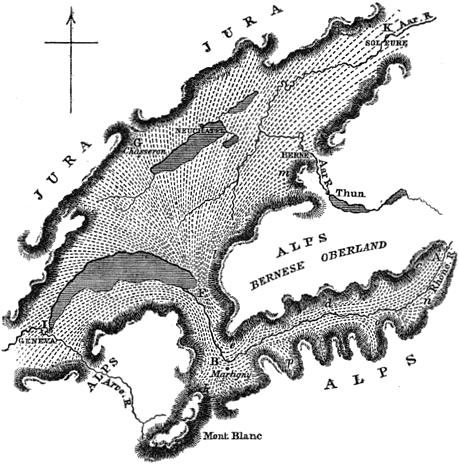 Map of The Rhone Glacier and the distribution of the erratic blocks and drift associated with it.
Photo C. Lyell "The Antiquity of Man" (1873)
If you wish to print either of these images, the best way is to copy it and paste into a drawing program such as Claris Works, Apple Works, MS Works, Adobe Illustrator, Corel Draw etc.

Then paste into a drawing program, and choose a percentage scale from the page set up menu to allow the entire page to fit on one sheet of paper. Try 60%.

Another way to do the same thing perhaps more easily is to click on the 'open map in another window' link below. It opens a page which only contains the map. This should then allow you to more easily save the map (go to the file menu and 'save as source') so that you can open it later from a drawing program.

open this map in another window

Another method is that after saving it from Netscape, later on at your convenience open it again with Netscape (or Internet Explorer, whatever you saved it from) and print from your browser itself at say 60%.

I'd appreciate feedback on the success or otherwise of these instructions.