The Venus of Polichinelle, carved in green steatite, length 61 mm, 27 000 years old, found at Grimaldi. The pronounced buttocks and the projecting belly gave it the name Punchinello, but some see in it a woman about to give birth. Punchinello, or Polichinelle in French, is the short fat buffoon or clown in an Italian puppet show.

Steatite, or soapstone, is one of the easiest and most rewarding materials to use for carving. Many people would be familiar with the similar stone used by the Canadian Inuit. It is not only easy to carve, it takes a good polish.


In the late 19th century, several stone age finds of extreme age had been made in the caves and rock shelters around the "Baoussé Rossé", Balzi Rossi, (the Red Cliff) on the Liguria Coast, part of Italy, near Menton on the French Côte d'Azur. One of the more dramatic was that of two children with snail-shell belts in what was named as "les Grottes des Enfants" (Cave of the Children) as well as stone tools and several Venus figurines. Around the turn of the 20th century, Albert I, Prince of Monaco, financed the archaeological exploration of the seven most important caves. These were named "Caves of Grimaldi" in honour of the House of Grimaldi.

The caves yielded several finds. The remains from one of the caves, the "Barma Grande", have in recent time been radiocarbon dated to 25 000 years old, which places it in the Upper Paleolithic.

Text above adapted from Wikipedia. 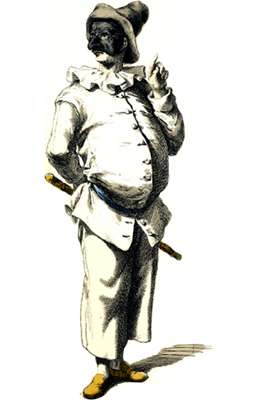 Pulcinella, often called Punch or Punchinello in English, Polichinelle in French, is a classical character that originated in the commedia dell’arte of the 17th century and became a stock character in Neapolitan puppetry. 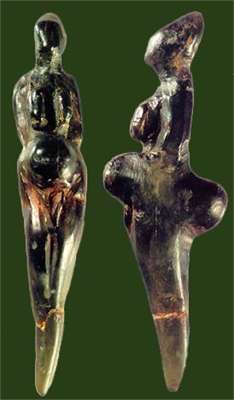 The Venus of Polichinelle. 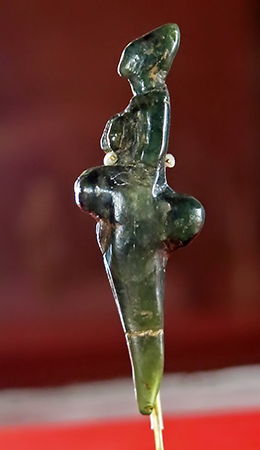 The Venus of Polichinelle.

The Venus of Polichinelle, seen in ¾ view.

The vulva is, as is common with venus figures, shown larger and with more exaggeration of its contours than in real life.

The Venus of Polichinelle

The Venus of Polichinelle 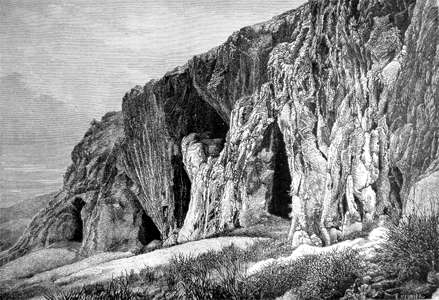 The cave of Baoussé Rossé (Balzi Rossi, Rochers Rouges, Red Cliffs), to the east of Menton, engraving by Sorrieu, after a photograph of M. Rivière.

Date: 1877
Source: Wikipedia, via Élisée Reclus, Nouvelle géographie universelle, t.2: La France, 1877, p. 35
Permission: This image is in the public domain because its copyright has expired. 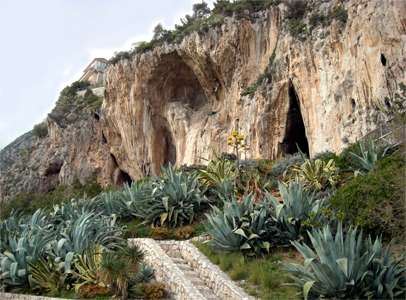 The caves of Balzi Rossi today.

From west to east, cave of Fanciulli, cave of Florestano and cave of Caviglione in Ventimiglia area, Italy.