The Nun Venus, or the 'Flattened Figure'

The Nun Venus, or the Flattened Figure is a Balzi Rossi or Grimaldi figurine which has been carved on a flat oval pebble of dark green chlorite and is about 44 mm high. The arms merge into the outer mass of the pebble, and the form brings to mind a female with a quasi-religious and hieratic bearing. The enveloping cape adds an air of mystery.


Text above adapted from http://www.civilization.ca/ 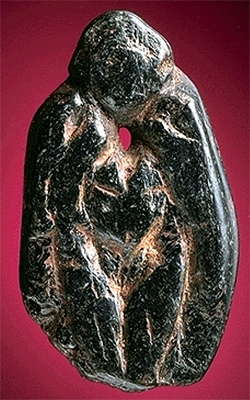 Front view of the 'Nun', or 'Flattened Figure'

The Nun's form brings to mind a female with a quasi-religious and hieratic bearing. The enveloping cape adds an air of mystery.

In a few strokes, the artist has carved an oval pebble to represent the body of a woman, whose arms merge into the outer mass of the pebble. Some of the more discernible elements are a featureless face set off by fine lines from the hair or a headdress, which itself contains very fine incisions; a demarcation of the lower jaw, which sets off the shoulders; a rounded torso and abdomen in which the breasts and navel are suggested by small nicks; and a pubis rendered by a series of lines, which end in a single line marking the crotch.

Also significant are the incisions on the polished back of the pebble, which hint at the presence of a second figure. Finally, a perforation at the base of the chin indicates that the object may have been used as a pendant.

Approximately 44 millimetres high, this piece is made of a type of dark green chlorite. 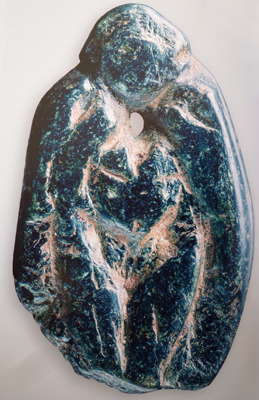 Another version of the Nun Venus. 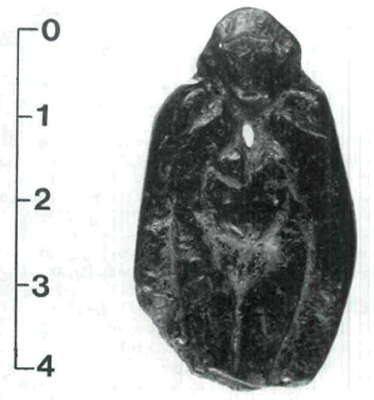 This is a roughly oval pendant in the form of a dorso-ventrally compressed human figure. Like the Bust, it is made of a dark-green, slightly translucent chlorite. This specimen was thoroughly cleaned by Jullien, and no adhering sediment has survived. Incisions on it preserve a patina which, under microscopic examination, consists of hematite particles. Because the surface and edges of the specimen are polished, it is impossible to know if this patina is the remains of a coating of red ochre as in the ivory figurine with red ochre, or of the polishing agent (Randall White, personal communication). Measurements are total length 44.2 mm, width 27.6 mm, thickness 8.5 mm. The weight is 14.007 g.

Like the Bust, this is a simple and crudely executed sculpture. The head is circular, with no obvious facial features other than two very shallow pits on each side that may indicate ears. The perimeter of the face is ground flatter than the center of the face, which is slightly convex. Two very fine parallel incisions run along the top of the head on the front and back edges of the specimen. Equally tiny and irregularly placed transverse incisions connect these two lines to form a hair pattern. A deep groove indicates the neck and is connected with an inegular oval perforation immediately below the chin.

The top edge of the shoulders is clearly indicated, and two deep triangular notches are placed at the position of the anterior deltoid muscle. The anns lack any detail and extend down the sides of the specimen, ending at midthigh. The outline of the arms forms the perimeter of the pendant. The torso is heart-shaped, and the breasts, abdomen, and buttocks do not protrude. A broad groove extending down from the perforation separates the two sides of the upper chest, which is demarcated at the bottom by two short diagonal incisions angled in a manner that resembles the bottom of male pectoral muscles rather than female breasts. The abdomen is wider than the chest, and a small hole at the bottom indicates the navel.

The triangular pubic area is large and deeply incised with a series of vertical grooves. Tbe deepest groove is in the center, but this is not as distinct a representation of the vulva as is found on some other specimens from Grimaldi. The legs are separated by a groove and have one unusual detail—a single extremely fine incised line running lengthwise down the center of each thigh. The back of this pendant is polished but otherwise nearly plain. A rough Y-shaped groove indicates the back of the neck and is connected to the crudely chiseled perforation. A second, indistinct Y-shaped groove indicates the bottom of the buttocks and the division between the legs. Attribution of gender to this figurine is difficult because it lacks the pronounced secondary sexual characteristics that characterize most of the Grimaldi sample.

The head resembles that of the Bust and the "Femme au cou perforé" at Harvard, both of which are female, but the upper torso lacks projecting or pendulous breasts. The genital region appears to he female but is also less clearly detailed than on other specimens. The flattened profile may have been a consequence of the available raw material, but enlarged or pendulous breasts could have been depicted in outline as they are on the low-relief female sculptures at Laussel. This figurine is probably female but may represent a juvenile. It is also possible that the combination of a male upper torso with female genitals was a deliberately ambiguous representation of gender similar to the 'Hermaphrodite' from Grimaldi, which combines unambiguous female breasts and abdomen with male sex organs (Delporte 1993) 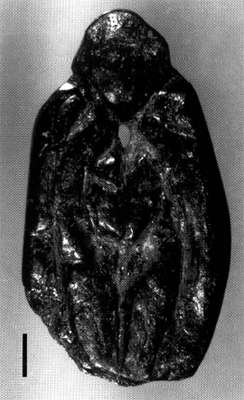 
From the front, this piece appears as an irregular oval on a flat surface. All anatomical details are incised or engraved on the surface to make the figure. A hole was cut in the neck for a cord.

The statuette is made of the same material, chlorite, as the 'Bust', but the texture is finer and the support is thinner, making the piece less fragile (without a line of cleavage) and allows a little smoother polishing. No fresh fracture is visible. Rough surfaces present on the extremities of the upper and lower members may correspond to a break during the manufacture or the original surface of the original material.

Slight abrasion and the rounded appearance of these surfaces could be taken as proof of an attempt at reparation after the break, but it is not. Under the binocular microscope, these rounded surfaces show fine abrasion (with visible striations) rather than a polished surface (stripes not visible). No trace of sediment has remained on the statue, but fine particles of haematite are still present in natural depressions and cuts on the surface. Has Haematite has been used as a polish in order to give lustre to the piece, or, more likely, in order to cover it with red ochre?

This simple female representation and its crude shape has much in common with the "bust" in addition to the raw material.

The head is flat and circular, and there is a lack of facial features. There are fine cuts marking the hair and the outline of the hair. The long arms define the torso, and breasts are not shown. The belly and buttocks are flat, but with rounded margins, and there is a small notch representing the vulva. The legs end below the knees, and there is a trace of ochre in the cuts. The piece is pierced through the neck, presumably for hanging on a string or thong around the neck. 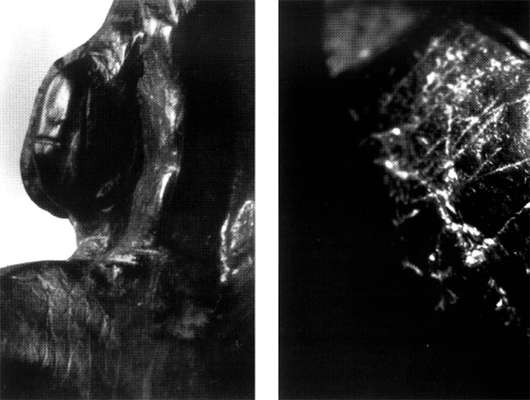 Thus, we can see the circular shape of the head with the face defined by an incised line. The area around the face is flat while the face itself is slightly convex. No line appears with the exception of two small depressions in place of ears. Two parallel incisions made with a cutting tool delimit the top of the head on the face and the back of the specimen. The area between these two lines is covered other incisions perpendicular to the first. This series of incisions, more or less subparallel, is perhaps the hair (Fig. 4, right). The head is hunched into the shoulders and distinguished by two deep grooves which converge into a V shape and terminate in a perforated oval under the chin. The shoulders are unusually broad and carry two deep triangular notches in the deltoid muscles. The arms are distinguished from the bod by long incisions follow the curves of the figure to mid-thigh. Elbows, forearms and hands are not represented. The upper limbs terminate simply with a rounded surface. At the far end of the arms, the stone was scraped and left without fine polishing to make distinct the contours of the thighs. The contour of the torso is incised, and, viewed from the front, has a circular shape. The treatment of the left margin of the torso is slightly different from that of the right margin.

The breasts (Fig. 5), abdomen and buttocks cannot be seen to be prominent. The abdomen is wider than the chest. A small depression indicates the navel. The pubic triangle is wide and deeply incised. The deepest cut is slightly crooked on the left. This last is probably the vulva, even if its representation is more ambiguous than those observed on other Grimaldi specimens. The lower limbs are separated by another incision. Unusual and unique details appear on the thighs. At the front, a rather fine line is incised longitudinally in the centre of each thigh. 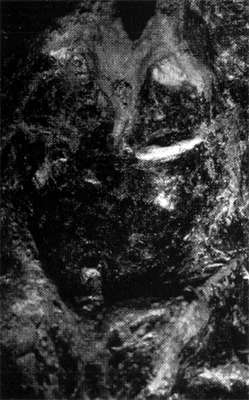 Detail of the breasts of the Flat Figure (coll. Bolduc).

The back of the pendant is finely abraded. Irregular incisions forming a converging Y emphasise the lower neck, and meet the perforation. Other incisions, less distinct, forming a Y also emphasise the buttocks and mark the separation between the legs. The gender of this figure is difficult to determine because the secondary sexual characters are less pronounced than on most of the sculptures of Grimaldi. Thus, the head resembles that of the 'bust' or 'Woman with a perforated neck' of Harvard. These are definitely female.

However, the chest is quite different because it is not prominent. Similarly, the female genital area seems to be less pronounced than on other specimens. Nevertheless, the flattened appearance of the piece may be due to the initial form of the material.

The chest has been rendered by deeply etching the outline. This technique was used for Laussel in the piece called "the Playing Card" We believe that this figure, constrained by the shape of the stone used, is that of an adult woman, but it is not impossible that it is a representation of an adolescent.