Back to Lake Mungo index 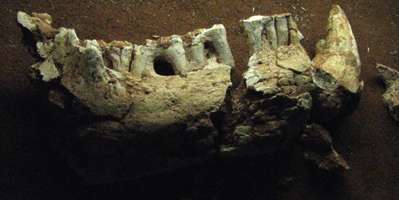 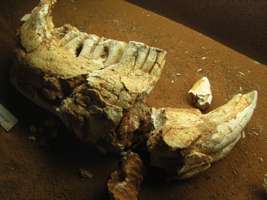 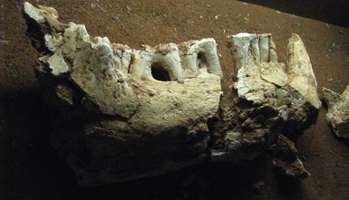 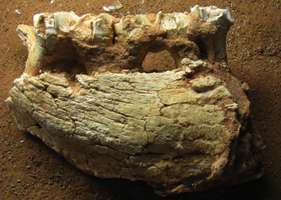 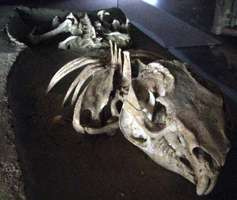 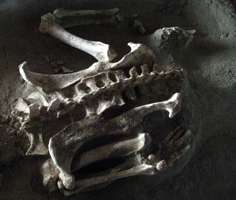 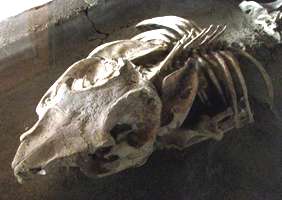 The Hairy Nosed Wombat, Lasiorhinus krefftii, has disappeared from this area. It once spread from New South Wales to Queensland, but now only survives in one small population in central Queensland.

Why it died out is a mystery. It seemed to be well on its way out, long before Europeans arrived. Was it a victim of the Ice Age, or did it fall foul of the dingo? Whatever it was, the introduction of sheep and rabbits and the clearing of its natural habitat have certainly not helped it in its battle for survival. 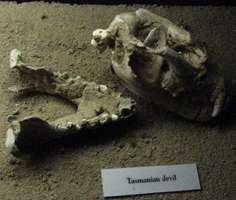 The Tasmanian devil cannot be mistaken for any other marsupial. Its spine-chilling screeches, black colour, and reputed bad-temper, led the early European settlers to call it The Devil. Although only the size of a small dog, it can sound and look incredibly fierce.

The world's largest surviving carnivorous marsupial, the devil has a thick-set, squat build, with a relatively large, broad head and short, thick tail. The fur is mostly or wholly black, but white markings often occur on the rump and chest. Body size also varies greatly, depending on the diet and habitat. Adult males are usually larger than adult females. Large males weigh up to 12 kg, and stand about 30 cm high at the shoulder.

Devils once occurred on mainland Australia, with fossils having been found widely. But it is believed the devil became extinct on the mainland some 400 years ago – before European settlement. Devils probably became extinct there due to increasing aridity and the spread of the dingo, which was prevented by Bass Strait from entering Tasmania. 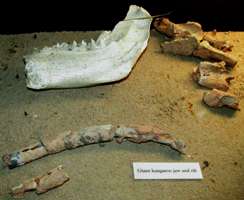 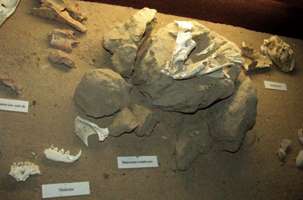 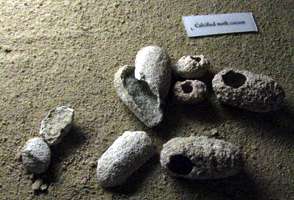 Algal Tubules. Plants and small aquatic organisms lived on the lake. These tubules are remnants of this ecosystem.

The dark stains in the sand are decayed organic remains from shallow water plants. These are the fine match stick sized fragments. These are tiny hollow tubes, or algal tubules.

They formed when the stems of water plants were colonised by tiny bacterial and algal organisms. These organisms used photosynthesis to extract carbon dioxide from the water. This process fixed and secreted carbonate that then formed a tubular cast around the stem of the plant.

Small freshwater snails shells, Limnaea sp., may also be seen. The snails fed on the plants that colonised the lake shore. Algal tubules in this area are linked with Arumpo sediments and are 27 000 years old. They represent higher but fluctuating lake levels. They are older and higher than the photo which shows Zanci shoreline gravels. 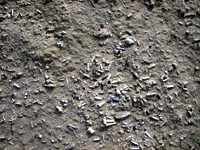 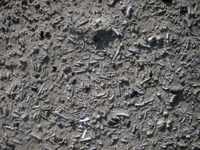 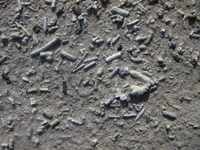 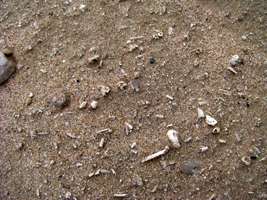