The Two Headed Woman, one of the Grimaldi Venuses

The smallest complete figurine in the Grimaldi collection is a tiny (27.5 mm) pendant made from the same pale green-yellow serpentine as the double figurine. Called the Woman with two heads or Bicéphale, this female specimen was broken at the waist, probably during excavation, and has been glued together. The surface is highly polished and was thoroughly cleaned by Jullien, but traces of red ochre are still visible in a number of incisions. A microscopic trace of brown manganese staining adheres to the abdomen and encloses a fine-grained gray-yellow sand. The head that faces forward is ovoid with no facial features. It lacks any deliberate markings except for a deep incision that marks the top of the forehead and 19 fine perpendicular incisions that terminate in a second deep incision indicating thick hair. On the other side of the connecting circular bridge is the second ovoid head that faces in the opposite direction. Also featureless, the second head is slightly larger than the other head and is tilted in the same angle as the first. An oval suspension hole was carved between the two heads and a waxy, fibrous mass found lodged there may be the remains of some form of mount used by Jullien, the man who discovered most of the Grimaldi venuses. The body of the figurine is made up of a narrow torso, no arms, projecting breasts and belly, and legs that taper to a point at the knees. The breasts are pointed, extremely large, projected forward, and extend laterally beyond the edge of the torso. Unlike the right breast, the left breast has two grooves circling it and a hole pecked in the tip, presumably representing a nipple. It has a flat back with a faint groove indicating the spine, a narrow waist, and wide hips. The centre of the abdomen is protruding and almost perfectly round and has a small navel in the centre. The large and circular buttocks are marked by a crease at the top and there is a pit carved at the approximate position of the anus. The very large pubic area contains a vulva that is indicated by a vertical groove.

Made of greenish-yellow serpentine and highly polished, the figurine is 27.5 millimetres high.


(Text below translated and adapted from White et Bisson 1998)

This little pendant is made of the same yellow-green serpentine as the Double Figure. It is the smallest of the entire collection of Grimaldi figurines, with a length of 27.5 mm, a maximum thickness of 12 mm and a weight of only 1.85 g. Its surface is highly polished and has been thoroughly cleaned. However, traces of red ochre are still visible in the incisions. Microscopic traces of manganese (brown?) stain the abdomen and retain a fine grain sand, yellowish grey.

A fibrous, waxy mass is located in the hole between the two heads. This could be the remnant of a substance used by Jullien during cleaning. A break at the waist, probably caused during excavation, was re-glued. Apart from this restoration, there has been no recent change to the figure. The head is ovoid, 5 mm long and projects forward. No facial feature is represented.

A deep incision marks the top of the forehead, while others, which are perpendicular, represent the line of hair. These incisions join another, deeper line, which marks a small serpentine 'bridge' linking the two heads. This second head is in the opposite direction to the first, but in the same attitude. Its shape, an oval slightly larger than the first, has no features marked. Only two parallel incisions appear on the back of the head, at the spot where it is in connects to the other.

Between the two heads, there is an oval hole for suspension measuring 3 mm by 1.8 mm. The neck is formed by a deep abraded groove. The torso is narrow with a width of only 5.5. The upper limbs are absent. The breasts are conical and project forward. They are extremely large (7.9 mm) and extend laterally beyond the edges of the torso. The right breast is unmarked but, on the left, there are two incisions in a circle (?) and a puncture hole. 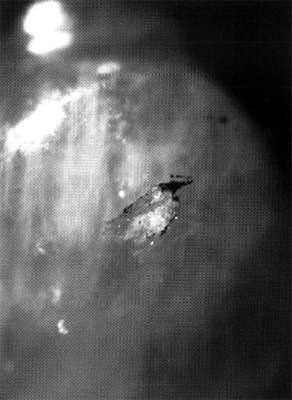 Microscopic view of the abdomen of the 'Woman with Two Heads' showing the navel and the polished surface, perhaps glazed. (coll. Lavigne).

The back is flat and an incision at the centre could indicate the spine. The waist is small. The hips are wide. On the hips, a deep but narrow incision, is located at a level at the middle of the abdomen. These features are almost identical to those visible on the abdomen of the 'double figure'. The centre of the abdomen is protruding and almost perfectly round, with a small pecked belly button in the centre. The base of the buttocks is marked by a slightly curved and horizontal incision. A puncture hole is present approximately at the position of the anus. The pubic triangle is very wide and the vulva is indicated by a vertical incision. The lower limbs are separated by a lightly marked incision on both sides that thins out towards the knees.

(Text above translated and adapted from White et Bisson 1998)