The material on this page comes mostly from Boroń et al. (2012) except where otherwise indicated 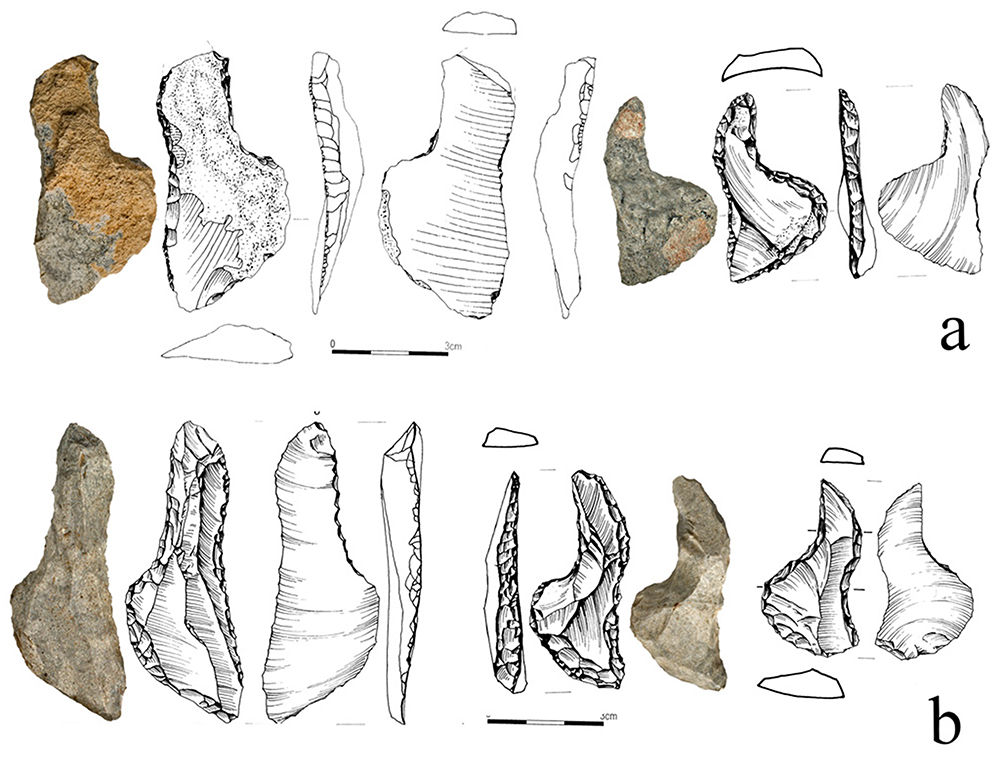 Venus figures in flint from Wilczyce, Poland, circa 15 000 BP 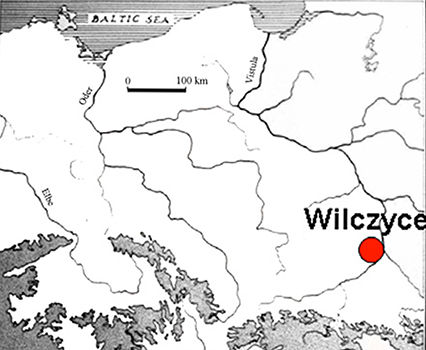 Located on the Sandomierz plateau in southern Poland, the Wilczyce site was discovered in 1994 during a prospecting campaign carried out as part of the Polish Academy of Sciences project 'Polish Archaeological Photography'. The site is located on a slope dominating the valley of the river Opatówka.

The programmed excavation revealed that the remains of the Magdalenian were present only in the layers of the filling of an ice wedge*. The excavation as well as the archaeological prospecting have delivered a total of 50 objects of flint identified as figurines, 31 of which with worked surfaces (finished objects). 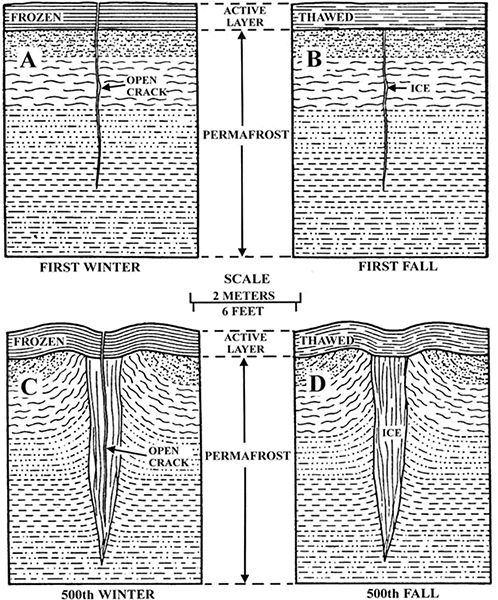 ice wedge*: Large masses of ice growing in thermal contraction cracks in permafrost. In periglacial conditions, alternating freeze and thaw can lead to the formation of vertical, narrow, and deep wedges of ice in gravels. After melting, these tend to fill with sediment, forming a cast of the ice wedge seen as dark bands, easily confused with manmade features, in aerial photographs. Casts of fossil ice wedges are one of the few true indicators of former permafrost conditions.

This group also includes fragmentary objects and 19 unfinished objects. The statuettes were most often made from splintered shards, more rarely from blades. Their length varies between 18 and 83 mm. They were divided into two groups, according to the position of the buttocks: the first - in right profile, that is to say, buttocks to the right - has 27 specimens, the second - in left profile. We also noted 4 objects of this type identified in the osseous artefacts of Wilczyce. Two female figures are in right profile, one in left profile and the fourth seems to represent a pregnant woman.

( note that English speakers would normally identify a figurine with buttocks which are on the right of the sculpture as being in left profile, that is, you are looking at the left side of the person portrayed, and vice versa - Don ) 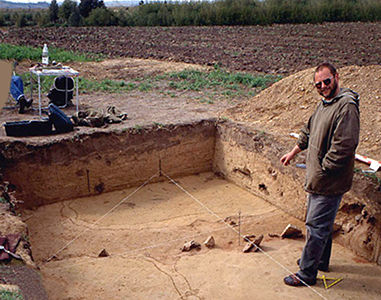 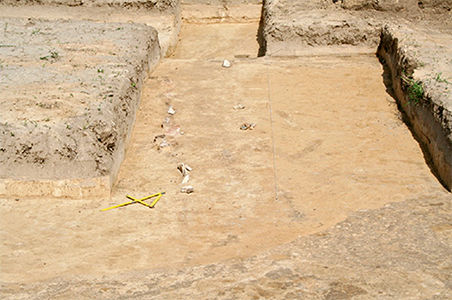 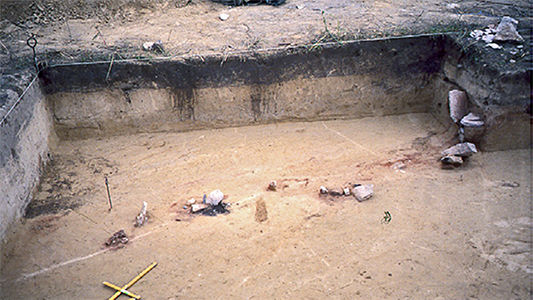 Ice wedge deposit in the floor of the excavation. 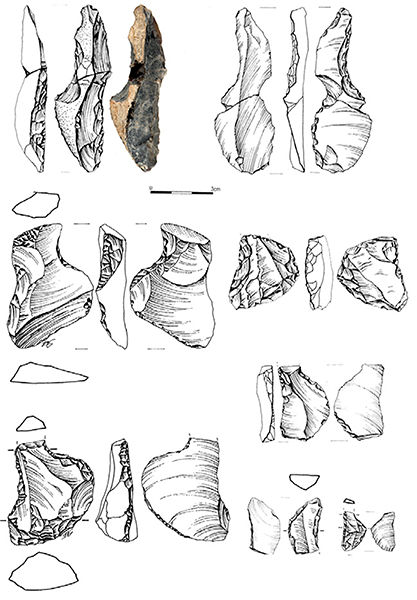 4. Wilczyce 10: figurines in order of size, and fragments.

In this group of objects, 31 specimens are whole or fragmentary and can be considered finished objects, with the contour and profile completed, 19 are either in the process of being made (the first roughouts could be identified) or are scraps due to accidents during manufacture.

In fact, the presence in situ of evidence of the different stages of manufacture makes it possible to propose with confidence that these objects were made at the site. 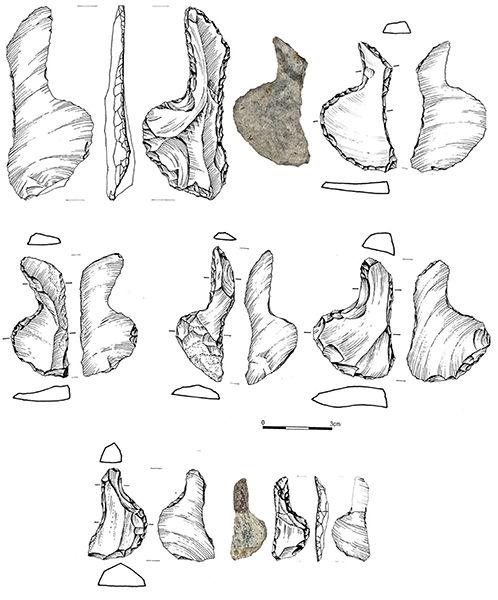 The figurines were mostly shaped from chips (39 in total) and more rarely, from blades. The presence or the absence of cortex does not seem to have played a role in the preferential choice of one of these two types of raw material, as well as the orientation of the raw material during the cutting phase.

On the figurines, the percussion bulb Is located on the distal (feet), proximal (head) or lateral (near the buttock) portion of the object. The use of retouching to 'sculpt' these figures is the defining technique of this series.

Indeed, one can observe on these parts abrupt, semi-abrupt, even grazing retouches (on the upper face). Retouching can be total and invasive, or partial. In the latter case, retouching then only corrects the defects of the initial morphology of the selected medium. In all cases, one notices that the part worked with the most care is always the buttock.

The lower part of the body is rounded or tapering, the thighs never being represented. As a general rule, the pattern of manufacture of the statuettes hardly varies: breasts are barely sketched in by a notch in the upper part of the stone, the enlarged buttocks are accentuated in its lower part, the reverse faces of the figures are flat or slightly concave. 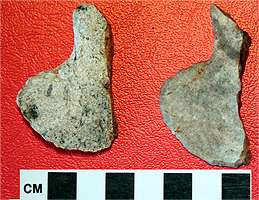 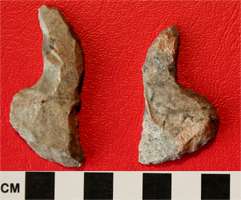 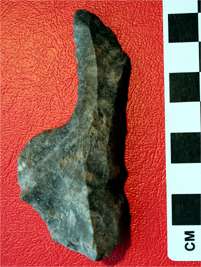 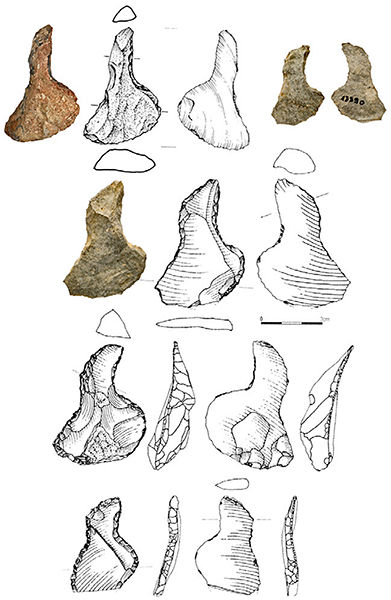 The specimens with buttocks to the right are often characterised by the rounded shape of the edge at the bottom of the figure, on the opposite side to the buttocks as shown here. A piece belonging to this type, but carved out of agate, was discovered on the site of Weiler bei Bingen (Schmid, 1972). ( see the text and image below )

The statuettes of Wilczyce can be divided into three groups according to their metric criteria: the most numerous are the figurines whose length varies between 40 and 65 mm and the width is between 23 and 44 mm. The second group, less numerous, consists of specimens of more slender form, with length 70 to 83 mm, and width 26 to 36 mm. Finally, the third group, which is more marginal, comprises small plates 27 to 39 mm long and 15 to 20 mm wide.

The colour of the translucent agate is light grey with slightly pronounced darker transverse stripes. At the top there is a section which is yellow.

The almost flat undersurface has a slightly rough surface, as is common when working agate. 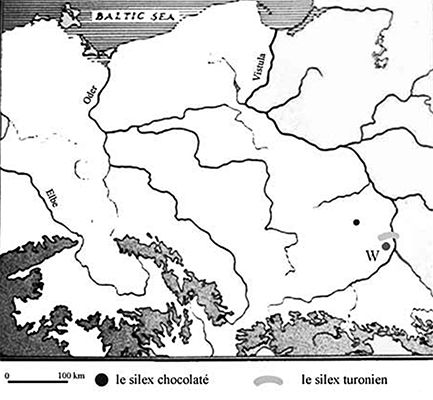 Two varieties of flint were selected to cut Wilczyce figurines: 'Chocolate' flint and Turonian flint, raw materials commonly used for the domestic production of tools. The map at left shows the probable sources for these flints.

'Chocolate' flint is one of the regional stones whose outcrops were to be found in the region of the Świętokrzyskie Mountains (Schild 1971, p 41, fig 13), at a distance of 70 to 100 km from the site. The length of the objects cut in this material varies between 27 and 79 mm, with a clear predominance of the parts in the range of 35 to 55 mm. In the diagram (figure 8a), the large differences between the length / width parameters give a very dispersed image of this set.

The Turonian flint is of local origin with deposits less than 20 km from the site (Fiedorczuk and Schild 2002 ). 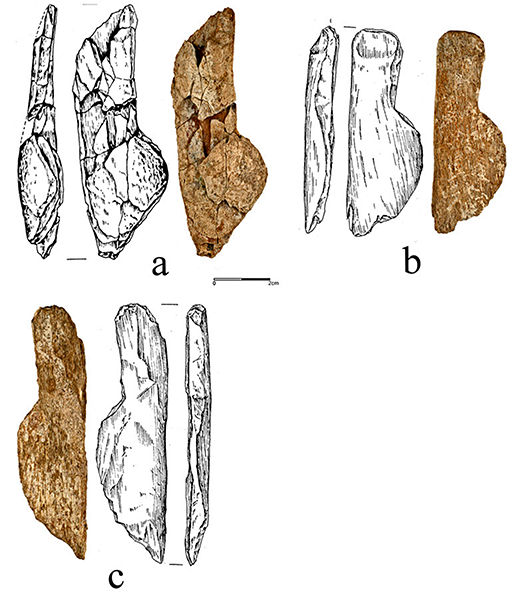 Four such objects were identified in the Wilczyce bone artefacts. The first figure (length 9.2 mm, width 3.2 mm) is made of ivory (fig. 9a). It was reconstituted in the laboratory by the efforts of Dr. Jan Fiedorczuk who, in his work, showed persistence and great patience. According to the typology of the statuettes, it belongs to the group in right profile, with the gluteus on the right. It was shaped from a plaque cut from a mammoth tusk.

The last piece, in ivory, is unique not only in its length but also in its form. It is, remarkably, a figurine of which one side is straight. On the opposite side, at the top, the breasts are scarcely visible, a strong constriction is observed in the middle part, while the bottom of the piece again assumes a bulging shape.

Reassembled from several small pieces during its reconstitution in laboratory, the object remains badly damaged. The length of the reconstituted fragment is 22 cm. The piece was cut in a flat plate of ivory (mammoth tusk).

The archaeozoological study of the bone remains at the site revealed that, apart from the tusks, no other element of a mammoth skeleton was identified. This suggests that the residents of this Magdalenian site obtained this valuable material by collection from a found skeleton rather than by hunting. 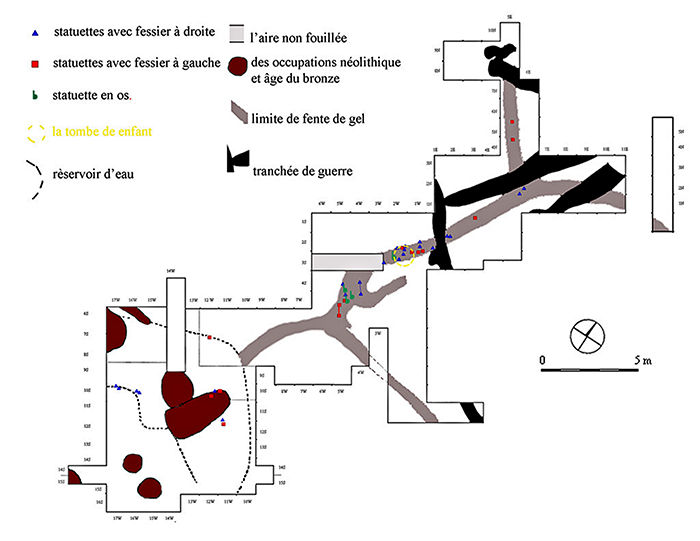 Spatial distribution of the discovered figurines.

Analysis of the spatial distribution of the finds makes it possible to distinguish three zones of concentration of this type of objects: the first in the northern part of the site, the second in its central part and the third in its southern part. This last area is unfortunately damaged by more recent occupations and the former water reservoir/pond.

The objects uncovered from these three places have no great stylistic differences. Each of the three zones hasdelivered figurines with buttocks on the right and buttocks on the left. The most numerous group was exhumed in the central part of the site, which seems to correspond to the longest of the Magdalenian occupations, evidenced by the presence of rich lithic and bone material.

These three concentrations of figurines could correspond to different phases or episodes of occupation of the Wilczyce site by the Magdalenians. 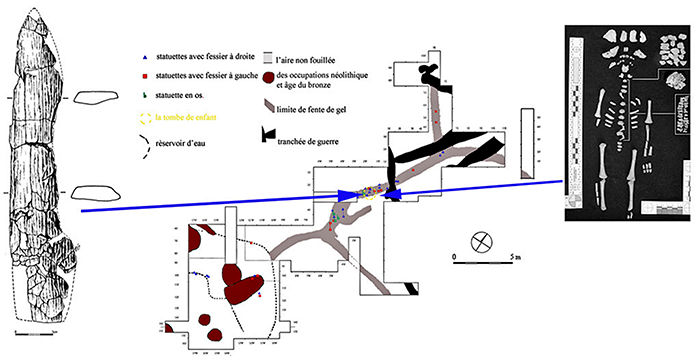 Ice wedge emplacements, with the location of the child skeleton also found at the site, as well as the ivory figurine.