The first specimen of Australopithecus sediba was found by palaeoanthropologist Lee Berger's nine-year-old son, Matthew, on August 15, 2008. While exploring near his father's dig site in the dolomitic hills north of Johannesburg, on the Malapa Nature Reserve, Matthew stumbled upon a fossilised bone. The boy alerted his father to the find, who could not believe what he saw - a hominid clavicle. Upon turning the block over, 'sticking out of the back of the rock was a mandible with a tooth, a canine, sticking out. And I almost died', he later recalled. The fossil turned out to belong to a 4 ft 2 in (1270 mm) juvenile male, whose skull was discovered in March 2009 by Berger's team. The find was announced to the public on 2010.4.8

Also found at the Malapa archeological site were a variety of animal fossils, including sabre-toothed cats, mongooses, and antelopes. Berger and geologist Paul Dirks speculated that the animals might have fallen into a deep 100 - 150 foot (30 - 46 m) 'death-trap', perhaps lured by the scent of water. The bodies may have then been swept into a pool of water with a sandy bottom rich with lime, allowing the remains to become fossilised. 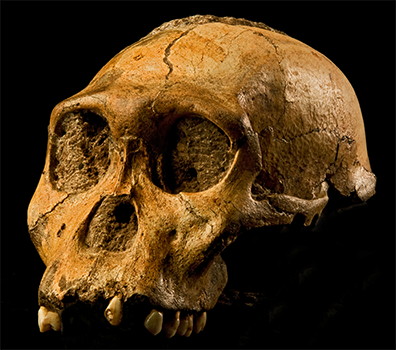 Cranium of the Malapa hominid 1 (MH1) from South Africa, named 'Karabo'. The combined fossil remains of this juvenile male is designated as the holotype for Australopithecus sediba. 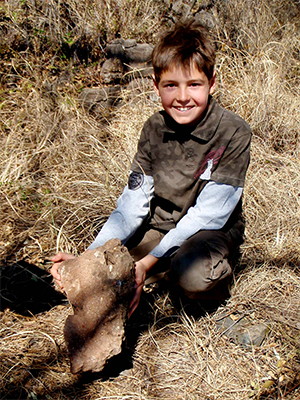 Matthew Berger moments after his discovery of the clavicle of Australopithecus sediba at the Malapa site, Cradle of Humankind, South Africa.


The fossil was dated using a combination of palaeomagnetism and uranium-lead (U-Pb) dating which showed that the fossils are no older than circa 2 000 000 BP. The presence of animal species which became extinct at 1 500 000 BP. indicates the deposit is no younger than 1.5 Ma. The sediments have a 'normal' magnetic polarity and the only major period between 2.0 and 1.5 Ma when this occurred is the Olduvai sub-Chron between 1.95 and 1.78 Ma. Accordingly, the fossils were originally dated to circa 1 950 000 BP. Recent dating of a capping flowstone demonstrated this was not possible and the normal magnetic polarity sediments have since been correlated to the 3000-year-long Pre-Olduvai event at 1 977 000 BP.

Morphology and interpretations[edit] Because of the wide range of mosaic features exhibited in both cranial and post-cranial morphology, the authors suggest that A. sediba may be a transitional species between the southern African A. africanus (the Taung Child, Mrs. Ples) and either Homo habilis or even the later H. erectus (Turkana boy, Java man, Peking man).[1] 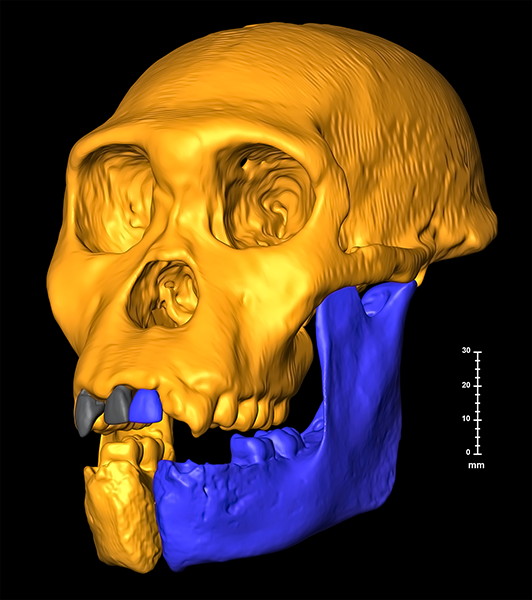 A reconstruction of the skull of Australopithecus sediba holotype MH1, or Karabo.

The cranial capacity of MH1, which has been estimated to be at 95% of adult capacity (420 cm3), is at the higher end of the range for Australopithecus sediba and far from the lower range of early Homo (631 cm3), but the mandible and tooth size are quite gracile and similar to what one would expect to find in H. erectus; so similar are these features that, if found in isolation without other skeletal remains, they could be classified as Homo based on tooth and mandible size. However, the cusp spacing is more like Australopithecus.

Regardless of whether Australopithecus sediba is a direct ancestor of early Homo or not, our understanding of the range of variation in early hominins has been greatly increased with the finding of these new specimens.

Australopithecus sediba compared to its ancestor species Australopithecus africanus on the whole is described by Berger et al. as more derived towards Homo than Australopithecus garhi, especially showing a number of synapomorphies taken to anticipate the reorganisation of the pelvis in Homo erectus, associated with 'more energetically efficient walking and running'. The femur and tibia are fragmentary, but the foot combines an advanced anklebone combined with a primitive heel. Its cranial capacity is estimated at around 420–450 cm3 (26–27 cu in), about one-third that of modern humans. 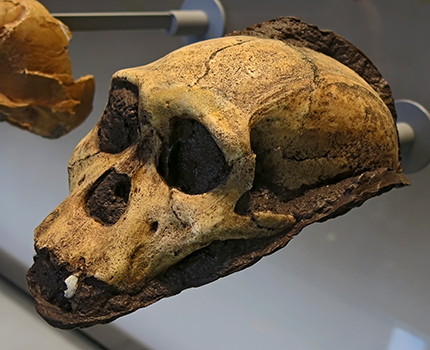 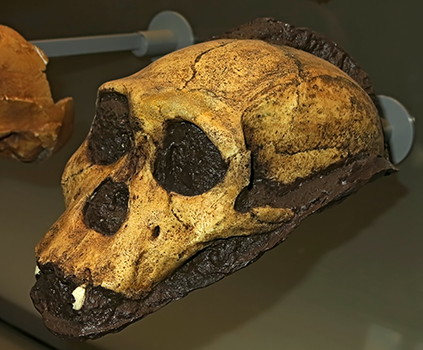 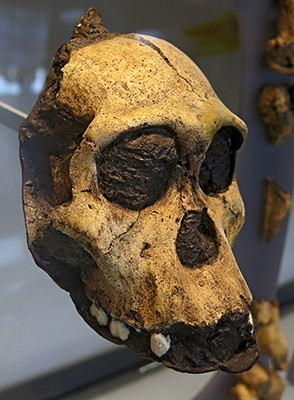 They date to about 1.98 million years ago in the Early Pleistocene, and coexisted with Paranthropus robustus and Homo ergaster/H. erectus.

MH1 has a brain volume of about 420–440 cm3, similar to other australopithecines. The face of MH1 is strikingly similar to Homo instead of other australopithecines, with a less pronounced brow ridge, cheek bones, and prognathism (the amount the face juts out), and there is evidence of a slight chin. However, such characteristics could be due to juvenility and lost with maturity. The teeth are quite small for an australopithecine. MH1 is estimated at 130 cm tall, which would equate to an adult height of 150–156 cm. MH1 and MH2 were estimated to have been about the same weight at 30–36 kg.

Like other australopithecines, A. sediba is thought to have had a narrow and apelike upper chest, but a broad and humanlike lower chest. Like other australopithecines, the arm anatomy seems to suggest a degree of climbing and arboreal behaviour. The pelvis indicates A. sediba was capable of a humanlike stride, but the foot points to a peculiar gait not demonstrated in any other hominin involving hyperpronation of the ankle, and resultantly rotating the leg inwards while pushing off. This suite of adaptations may represent a compromise between habitual bipedalism and arboreality. 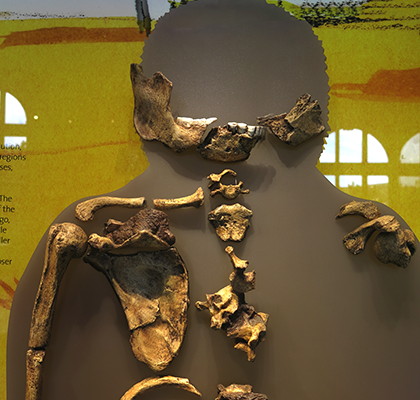 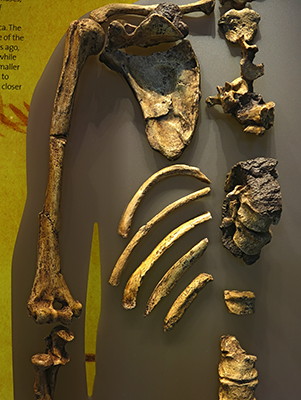 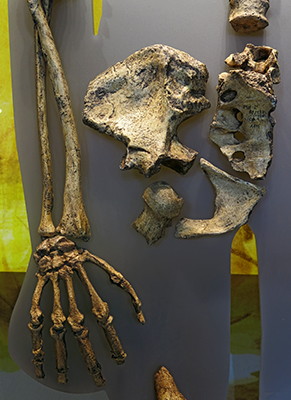 The phenomenon of mosaic evolution, that is the development of different regions of the body at different time phases, is illustrated by this skeleton of Australopithecus sediba from the Malapa Cave in South Africa.

This surprisingly late representative of the genus, at some 1 900 000 BP features the typical brain size, while other characteristics such as smaller teeth, longer legs and changes to the pelvis are thought to put it closer to the genus Homo.

Australopithecus sediba seems to have eaten only C3 forest plants such as some grasses and sedges, fruits, leaves, and bark. This strongly contrasts with other early hominins which ate a mix of C3 and abundant C4 savanna plants. Australopithecus sediba is similar to modern savanna chimps with respect to only eating C3 forest plants. No other hominin shows evidence of eating bark. 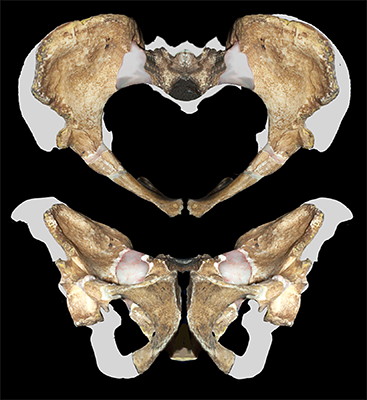 The reconstructed pelvis of MH2. Left side is a mirror image.

These are the superior and anterior views. 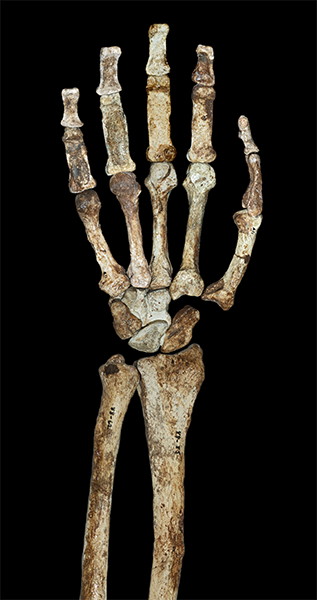 The hand and forearm of Australopithecus sediba (MH2).

Australopithecus sediba had a surprisingly modern hand, whose precision grip suggests it might have been another tool-making Australopithecus. Evidence of the precision gripping and stone tool production can be seen from Homo-like features such as having a long thumb and short fingers. This nearly complete wrist and hand of an adult female from Malapa, South Africa presents Australopithecus-like features, such as a strong flexor apparatus associated with arboreal locomotion. 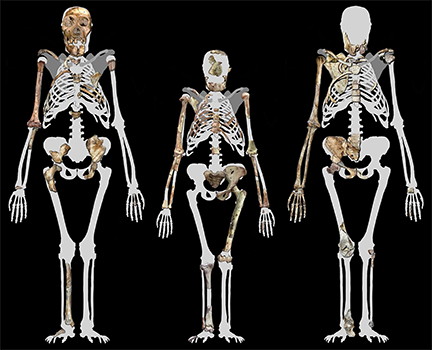