Waterproofing a pack quickly and easily 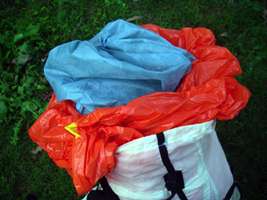 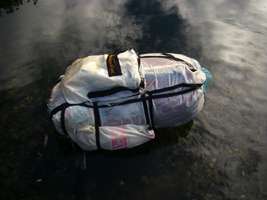 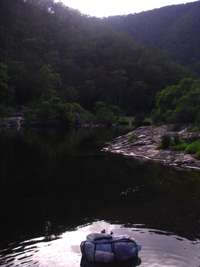 I've tried a few ways to swim a river, and this method works well for me.

Inside the pack you put one or two new orange garbage bags, a pack liner inside that to absorb the pushing and shoving and sharp bits inside your pack, and everything inside that in plastic bags, including your sleeping bag (MOST IMPORTANT!) and tent, the tent because you pack it up wet in the morning usually (from dew) and it will send moisture elsewhere if you let it. Thin black plastic garbage bags are fine for that, they don't have any stress on them. All food and clothes etc in ziplock bags. This particular river crossing I had the inner next to the pack, as in the centre and right photos, which means the inner gets wet, not a real problem since it is silnylon, but I prefer pack/plastic bag/inner, as in the left photo taken later in the trip.

Close the inner, and twist the garbage bag(s) top tightly, fold under the top of your bag, close that, and you're done. My pack for a four day gorge trip down the Chandler weighed 9.2 kg, and by the time I needed it for a swim across the river (second morning) it was probably about 8.5 kg. Since it is effectively an 80 litre pack, only about a tenth of it gets wet, and it is very stable floating on its back. You can stuff your clothes in the front pocket, (it's an advantage to have shorts with wide legs so you can slide them over your boots) and push it across the river. Not a good thing to let go of the pack if there was any current, though. A lanyard to the pack would be de rigeur under those circumstances, unless you wanted to walk out wearing just shoes and a hat and no pack. The entry to civilisation would be the interesting part...

And another good thing about that method down the gorges is that if you make an unplanned entry into the water, nothing is damaged. Also I found myself taking the pack off and floating it across in front of me when the water got in any way deep (up to my thighs for example) and leaning on it for stability. Worked a treat. Some of those crossings have large rocks covered in algae, and it is easy to go base over apex and into the water.