Venus figures from Russia, Ukraine and sites East of the Donau mouth

Avdeevo - Venus figures and other finds from this important archaeological site.

Venus figures from the Kostenki - Borshevo region on the Don River. Kostenki is a very important Paleolithic site. It was a settlement which contained venus figures, dwellings made of mammoth bones, and many flint tools and bone implements.

Mal'ta venuses - the site of Mal'ta, for which the culture is named, is composed of a series of subterranean houses made of large animal bones and reindeer antler which had likely been covered with animal skins and sod to protect inhabitants from the severe, prevailing northerly winds. Among the artistic accomplishments evident at Mal'ta are remains of expertly carved bone, ivory, and antler objects. Figurines of birds and human females are the most commonly found items.

The Zaraysk venus is not voluptuous, which puts it with the 'thin' Kostenki - Avdeevo venuses, but in this case there is one difference, that the legs are not placed together, which is also the case for the Willendorf venus. This testifies to the uniqueness of the Zaraysk site, which has features of both the Kostenki and Avdeevo cultures. Zaraysk or Zaraisk or Зарайск is an important Paleolithic site from the Ice Age in Russia, and is the northernmost example of the Kostenki - Avdeevo culture.

The Gagarino venus which is most well known is of an obese woman from the Gagarino site, located on the right bank of the Don River near the Sosna tributary. Here peasants discovered a house pit while excavating a silo trench. Zamiatinine, who excavated this site during 1926 - 1929, found a house pit roughly oval in outline about 5.5 metres long and 4.5 metres wide. The wealth of material remains found in this one house pit is seen in the recorded finds of some six hundred flint implements, over a thousand blades, and proportionately large numbers of cores and waste flints. Artefacts of bone as well as seven 'venus' figurines completed the roster of non-lithic material.

The female figurine from Berekhat Ram, in Israel is one of the oldest known figurative carvings in the world, and is somewhere between 250 000 and 280 000 years old, older than Neanderthal man, and probably carved by Homo Erectus. The original pebble bore a resemblance to a female, and this was enhanced by the carver, who cut grooves around the neck and along its arms. Microscopic analysis by Alexander Marshack has now made it clear that humans were responsible. 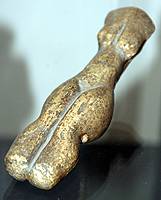 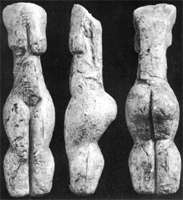 The Yeliseevichi site was discovered in 1930 and it is located on the river Sudost, the right tributary of the Desna, in the Briansk Province, Russia. The majority of prehistoric artefacts was found in a heap of mammoth skulls piled next to a residential house. The most remarkable of these is a finely modelled 15 cm tall figure depicting a shapely woman with no feet, head and hands, carved of mammoth tusk. The figurine has prominent buttocks and legs.

(This venus figure, represented by facsimiles in these photos, appears never to have had a head, and the sculpture emphasises the thighs and buttocks rather than the breasts, although they are certainly indicated. This has the look of a younger figure which has not yet gone through childbirth. The waist is slim, the hips and thighs are well formed, as are the breasts, unchanged by child-rearing. It has quite a different emphasis and seems from a different tradition when compared with most other Kostenki venuses, nor for that matter with most of the other Gravettian venuses from France, for example. It has affinities with the unusual "venus impudique" from France. - Don) 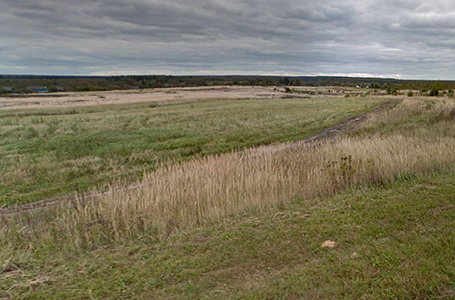 The wide and shallow valley of the Sudost River. 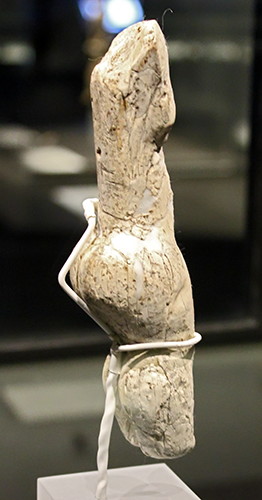 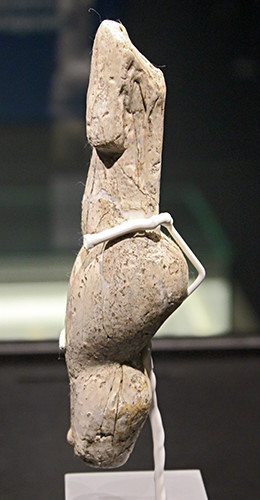 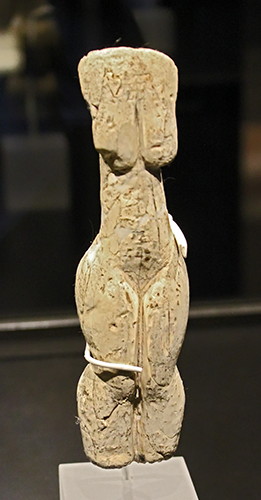 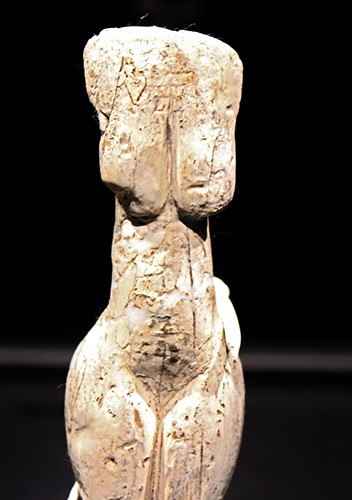 Source: original, exhibited at the Archeological Museum Hamburg (Ice Age - The Art of the Mammoth Hunters from 18 October 2016 to 14 May 2017)
On loan from the Hermitage Museum, Saint Petersburg, Russia.

This female figurine is the exception rather than the rule for the Stone Age. The model for the figurine is a young woman who has not yet given birth, judging from her flat stomach. Outside of the general canon of female images of the stone age, this figurine shows the realism of some art of that time, and is modelled on a specific woman of that distant time. 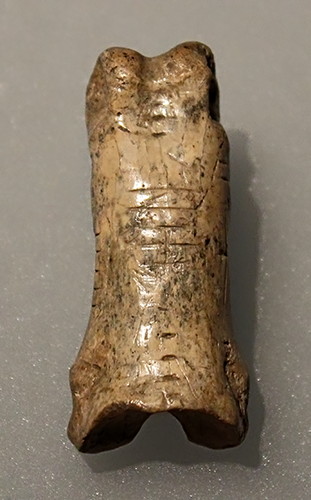 This bear bone from Yeliseevichi is decorated with regular engravings. 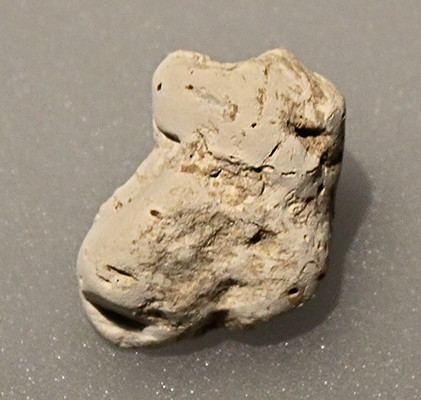 This head of pale limestone from Yeliseevichi has eyes and a mouth. It is assumed that it is a mixture of animal and man. 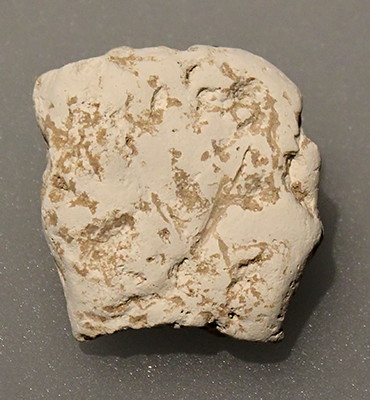 Also of limestone is this small plate from Yeliseevichi on which presumably an incised triangle and a point represent a vulva. 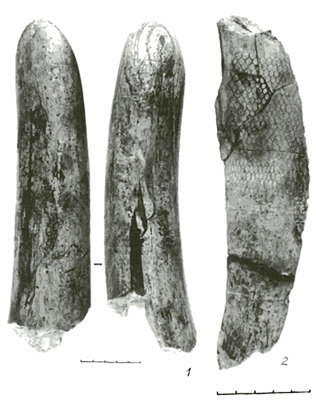 The engravings and the outline of this figure made of mammoth ivory give the impression of a freshwater fish. There are clearly scales and the tail fin can be seen.

In addition to these true to life features, there are also incised geometric zigzag decorations on the object.

Photo: Ralph Frenken
Source: Original, exhibited at the Archeological Museum Hamburg (Ice Age - The Art of the Mammoth Hunters from 18 October 2016 to 14 May 2017)