Rusinga Island, Lake Victoria, Kenya - Panorama taken from the south-eastern direction. It was on this island that Louis Leakey made an especially complete find of Proconsul in 1948. 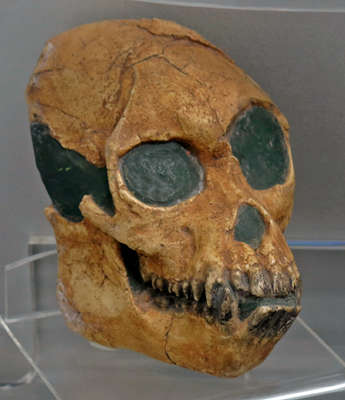 Proconsul africanus is the first species of the oligocene-era fossil genus of primate to be discovered and was named by Arthur Hopwood, an associate of Louis Leakey, in 1933.

The Leakey expedition of 1947 - 1948 to Rusinga Island in Lake Victoria uncovered more species of Proconsul. Mary Leakey made an especially complete find of Proconsul there in 1948, which was for a number of decades labeled africanus, but was reclassified as heseloni in 1993 by Alan Walker.

The 18-million-year-old fossil species has been considered a possible ancestor of both great and lesser apes, and of humans. The palaeontologist Louis Leakey, who was one of the foremost fossil-hunters of the 20th century and a champion of evolution, said:

'An especially important creature was Proconsul africanus. This, many authorities once concluded, gave us an indication of the common stock for apes and men. We have good forelimb bones for it, and in 1948 on Rusinga Island Mary [Leakey] discovered a skull, the first nearly complete specimen ever found. Its canine teeth suggest an ape's, while its forehead reminds us of our own. It seems to me, however, to be neither an ancestral ape, nor yet an ancestor of man, but a side branch with characteristics of both stocks.'

Leakey changed his mind a few times about the exact classification of Proconsul, as did most other palaeontologists. Opinion currently favours a position between the monkeys and the apes.

Text above from Wikipedia.

Note that this Proconsul africanus was first of all reclassified in 1993 as Proconsul heseloni, and then in 2015 as Ekembo heseloni, see McNulty et al. (2015) 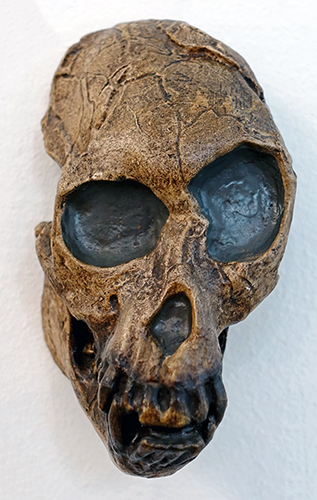 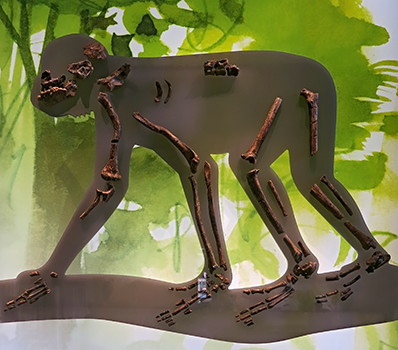 Proconsul, a tailless quadruped, lived some 18 million years ago in Africa and is one of the best documented Old World monkeys (Catarrhini) of the Miocene: thousands of fossil bone fragments have allowed reconstructions of its body proportions and mode of locomotion.

While its status as a genuine early ape is disputed, Proconsul represents a suitable model for the blueprint of an early hominoid. Here, a montage of the skeleton and a lifelike reconstruction of a young female are shown. 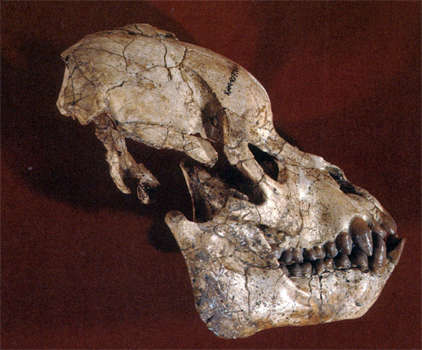 (Walker is probably best known for having found the Nariokotome Boy, a 1.7-million-year-old specimen of Homo erectus/ergaster) 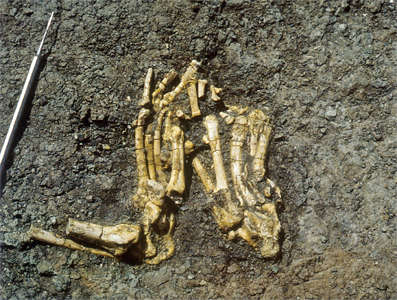 These adult Proconsul feet were still articulated in the rock at Kaswanga Primate Site.

Alan Walker, a distinguished paleontologist, has been intimately associated with Proconsul fossils since his graduate-school days; his wife Pat Shipman, is an anthropologist and celebrated science writer. Together they have crafted a compelling and accessible narrative that educates and fascinates. Both authors are faculty members at Penn State University, where Walker is Distinguished Professor of Anthropology and Biology and Shipman is Adjunct Professor of Anthropology.

In the first part of the twentieth century, fossil teeth, jaws, a spectacular skull of Proconsul found by Mary Leakey, and a stunning partial skeleton shaped anthropologists' ideas of our distant past. In 1980, when Walker happened to recognize some misidentified bones from the well-known partial skeleton in the National Museum of Kenya in Nairobi, the chance find set him on his own quest to unravel Proconsul's secrets.

He began by 'excavating' in the museum, turning up still more pieces of the famous skeleton in the collections. Then he moved on to field work, leading an expedition to remote Rusinga and Mfangano Islands in Lake Victoria, where early finds had been made.

Walker and his field crew struggled against extreme weather, wildlife, and locals who misunderstood their aims, yet they managed to relocate the old Proconsul sites. To their astonishment, they found that the original skeleton site preserved the contents of an ancient hollow tree: skeletons of carnivore's prey that had been carried to its lair. At least one Proconsul , then, was found in a tree. The team also found incredibly rich new sites, returning triumphantly to Nairobi with an unprecedented ten new partial skeletons of Proconsul. As a bonus, they collected hundreds of specimens of contemporary species - rhinos, pigs, carnivores, rodents, hyraxes, reptiles, plants, and trees. They had gathered fossil evidence of almost every aspect of the Miocene community in which Proconsul lived. 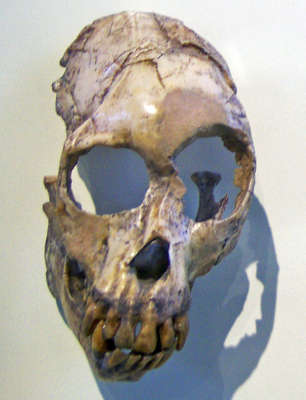 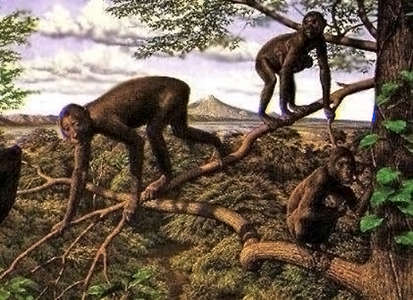 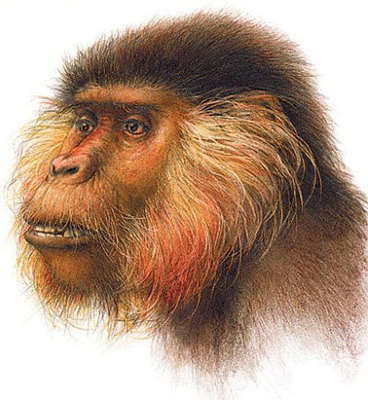 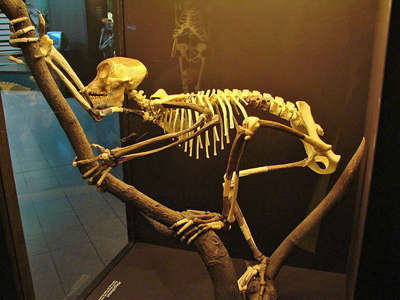 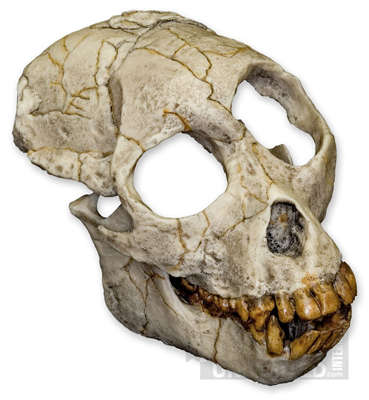 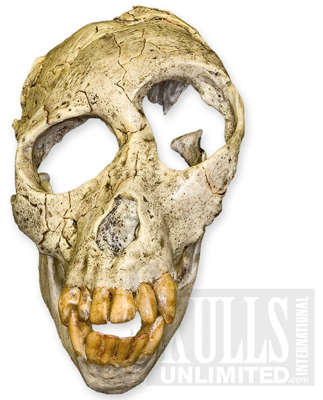 This is a beautifully made and finished facsimile from Skulls Unlimited, who are suppliers of first class specimens of this kind.

They seem to make a special effort to be as accurate as possible, and the results are better than most museums. Note that the original specimen they have made this facsimile from, the almost complete 1948 discovery by Leakey, has been distorted during its time of burial by overlying sediments, as shown in the photo on the right.

Proconsul Skull - Proconsul existed between 14 and 23 million years ago during the Miocene epoch. This species is one of the better represented early Hominid species due to the numerous specimens that have been excavated. This specimen is based on the 1948 Leaky discovery at Victoria Lake, Kenya. 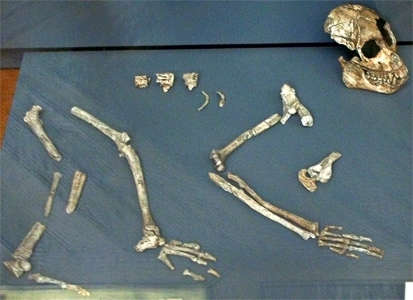 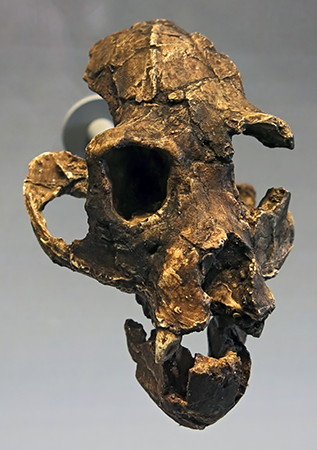 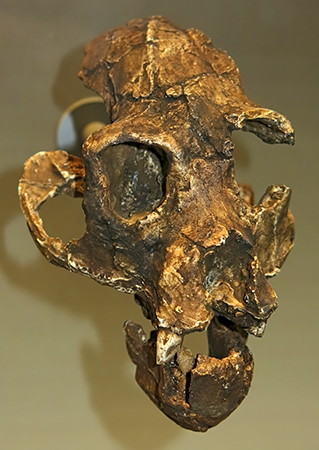