Padina is a mesolithic site in the Iron Gates area. 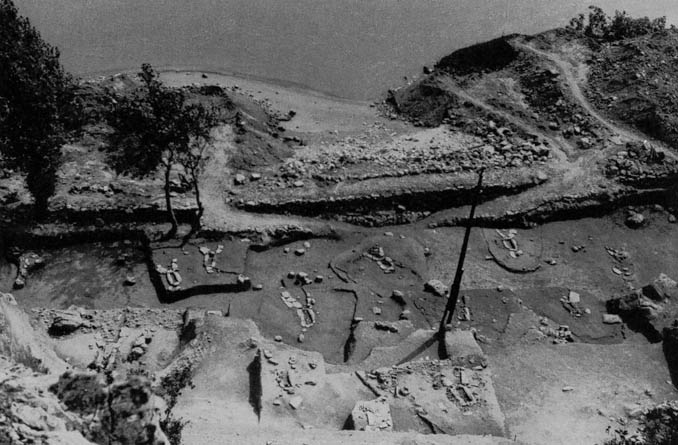 Text below is from 'Mesolithic Adaptations on the Lower Danube' by Beth Prinz, 1987:

Faunal remains from Padina are in some respects like those from Vlasac and Lepenski Vir. Several house floors at Padina have been described as having floors "covered by a heaped mass of fishbone" .3 to .4 meters thick (Jovanovic, 1969, 'Chronological Frames of the Iron Gate group of the early Neolithic Period in 'Archaeologica Iugoslavica X :p.29). The presence of bones of domesticated cow, sheep/goats, and pig (in addition to the unsurprising dog) in Padina A, the level which all archeologists agree is Mesolithic, may be explained by mixing of artifacts on this multi-component site, particularly because of the steep natural slope on which the site is located. The presence of domesticated pig in Padina A might also be interpreted as evidence of local domestication.

In Padina B, the level which some have argued is early Neolithic, others Mesolithic, it should be noted that the only well represented domesticate is the dog, while 80% of all bone is fish (Clason, 1980, 'Padina and Starcevo: Game, Fish and Cattle' Palaeohistoria, XXII, p.171). There is no obvious reason why recovery of fish remains at Padina should have been more efficient than at Vlasac and Lepenski Vir. There were no very small fish or mammals recovered at all. A faunal assemblage which is 80% fish, and where the most important mammal is red deer, does not indicate an economy based on food production, even if the small number of bones of domesticated cows, sheep/goats, and pigs really belong to Padina B, rather than representing "contamination" from higher levels of the site. The presence of these bones, and the small number of sherds also reported for Padina B, may indicate contact with neighboring food producers, but hardly justifies calling this occupation Neolithic. Whether the sherds and bone of domesticates 'belong' in Padina B is of importance in the chronological ordering of the Iron Gates sites, but does not change the interpretation of the primary economic orientation of Padina B. Since decreased importance of fish is typical of the earliest Neolithic sites compared to latest Mesolithic sites in the Gorge, the importance of fish remains at Padina B argues strongly for the interpretation of this site as a truly Mesolithic one.

Plan of the general situation of the site of Padina, with three sectors, showing the stone construction, ("N" Padiina A) , burials (black rectangles, padina A, Padina B) along the site axis, and the habitations (Padina B) .
Photo: The Iron Gates Mesolithic, I. Radovanović

Map of the Iron Gates region, with the position of Padina marked. 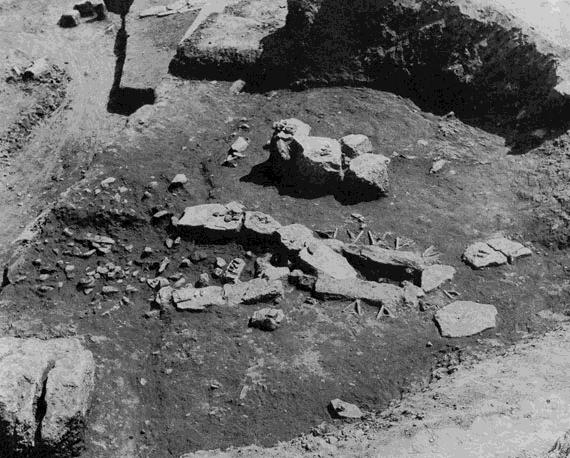 Padina Sector B House. Note the "A" signs or supports. No one seems to know what their significance is.
Photo: The Iron Gates Mesolithic, I. Radovanović