The recently found oldest fossil human cranium in Portugal marks an important contribution to the knowledge of human evolution during the middle Pleistocene in Europe and to the origin of the Neandertals. This cranium of Homo heidelbergensis represents the westernmost human fossil ever found in Europe during the middle Pleistocene epoch and one of the earliest on this continent to be associated with the Acheulean stone tool industry.

Homo heidelbergensis is an extinct species of the genus Homo which lived in Africa, Europe and western Asia from at least 600 000 years ago, and may date back 1 300 000 years. It survived until 200 000 to 250 000 years ago. It is probably the ancestor of Homo sapiens in Africa and the Neanderthals in Europe, and perhaps also the Denisovans in Asia. It was first discovered near Heidelberg in Germany in 1907 and named by Otto Schoetensack.

Both H. antecessor and H. heidelbergensis are likely to be descended from the morphologically very similar Homo ergaster from Africa. But because H. heidelbergensis had a larger brain-case - with a typical cranial volume of 1100-1400 cm3 overlapping the 1350 cm3 average of modern humans - and had more advanced tools and behaviour, it has been given a separate species classification. Male heidelbergensis averaged about 5 ft 9 in (1.75 m) tall and 136 lb (62 kg). Females averaged 5 ft 2 in (1.57 m) and 112 lb (51 kg).

A reconstruction of 27 complete human limb bones found in Atapuerca (Burgos, Spain) has helped to determine the height of H. heidelbergensis compared to Homo neanderthalensis, the conclusion was that most H. heidelbergensis averaged about 170 cm (5ft 7in) in height and were only slightly taller than neanderthals.

According to Lee R. Berger of the University of Witwatersrand, numerous fossil bones indicate some populations of Heidelbergensis were "giants" routinely over 2.13 m (7 ft) tall and inhabited South Africa between 500 000 and 300 000 years ago. Recent findings in a pit in Atapuerca (Spain) of 28 human skeletons suggest that H. heidelbergensis may have been the first species of the Homo genus to bury their dead.

Some experts believe that H. heidelbergensis, like its descendant H. neandertalensis, acquired a primitive form of language. No forms of art or sophisticated artifacts other than stone tools have been uncovered, although red ochre, a mineral that can be used to create a red pigment which is useful as a paint, has been found at Terra Amata excavations in the south of France.

The morphology of the outer and middle ear suggests they had an auditory sensitivity similar to modern humans and very different from chimpanzees. They were probably able to differentiate between many different sounds. Dental wear analysis suggests they were as likely to be right-handed as modern people.

H. heidelbergensis was a close relative (most probably a migratory descendant) of Homo ergaster. H. ergaster is thought to be the first hominid to vocalize and that as H. heidelbergensis developed more sophisticated culture proceeded from this point.

500 000 year-old hafted stone points used for hunting are reported from Kathu Pan 1 in South Africa, tested by way of use-wear replication. This find could mean that modern humans and Neanderthals inherited the stone-tipped spear, rather than developing the technology independently. 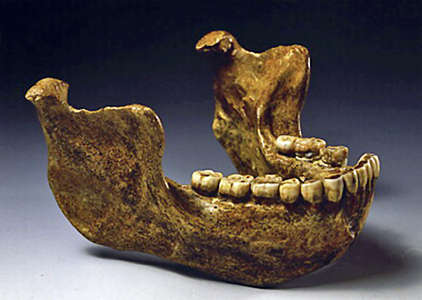 Mauer is the type site of Homo heidelbergensis..

This is Mauer 1, a lower jaw discovered in 1907 in Mauer, near Heidelberg, Germany. This jaw is the 'type specimen' or official representative of this species. It was discovered by workers at a gravel quarry which had previously yielded many fossils of extinct mammals. Lying at a depth of about 24 metres, its age is estimated to be between 400 000 and 600 000 years old.

This species had a strongly built lower jaw for the attachment of strong chewing muscles. As with earlier hominins, the lower jaw did not have a protruding, pointed chin. The teeth were arranged in the jaw so that they formed a parabolic shape (curved at the front then splayed out toward the back) and were smaller than those of earlier species (but larger than those of modern humans). 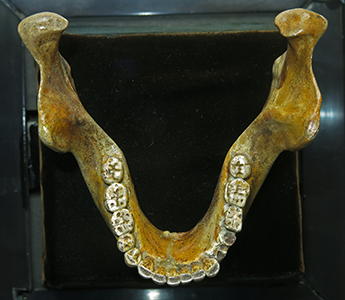 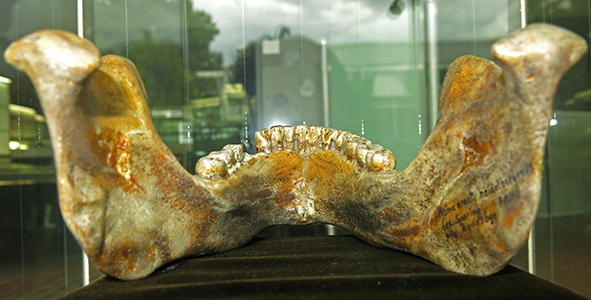 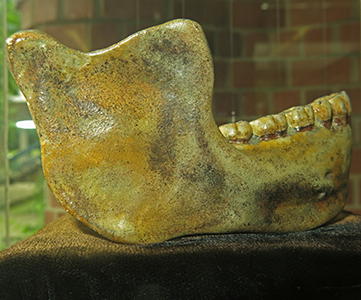 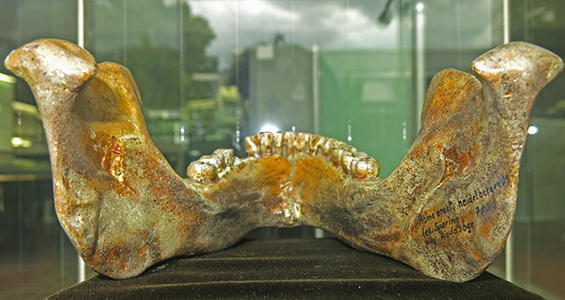 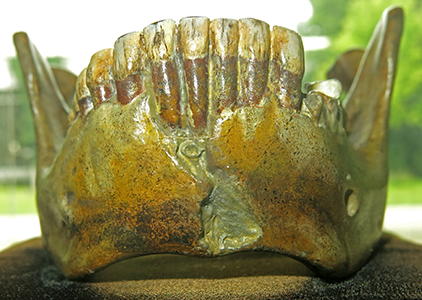 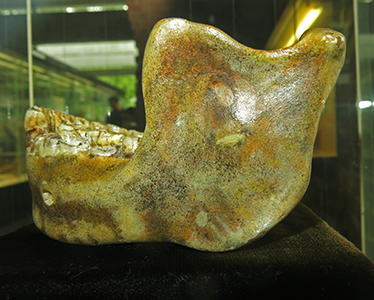 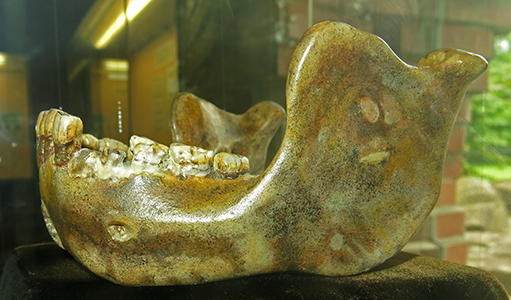 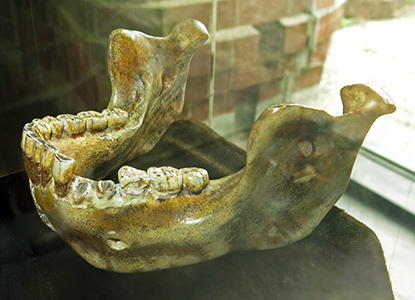 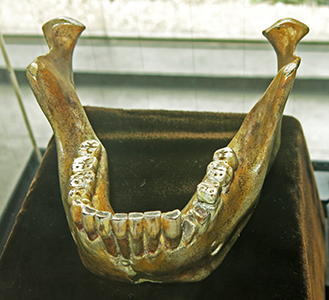 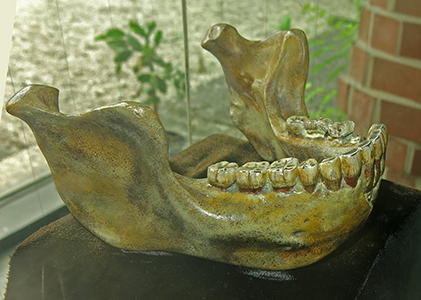 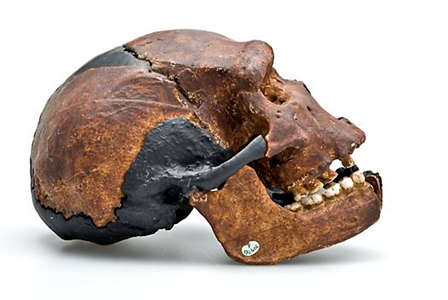 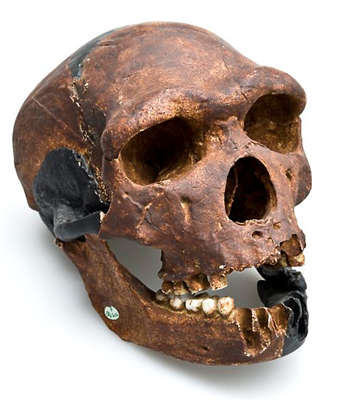 Cast of Arago 21 and Arago, a skull and lower jaw discovered in Arago Caves, Tautavel, France. Excavations since 1964 have revealed a number of human fossils at Arago including this skull and jaw from different individuals. Thousands of stone tools and the bones of many types of animals have also been uncovered at this site. The Arago 21 skull is relatively complete but it was distorted either before or during fossilisation. Its features are typical of this species but its size and robust facial features suggest that it is the skull of a young male. It has been dated as being between 250 000 and 400 000 years old. 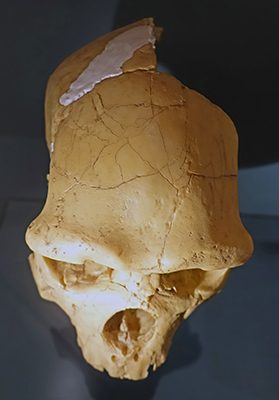 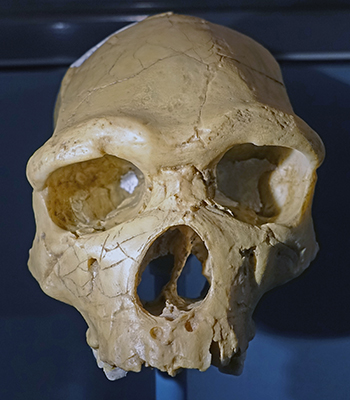 This skull, Arago 21, EM2273-EM2278, from Arago Cave belonged to a young adult male. Other human fossils and artefacts found at the same site suggest that these people had large brains, strong muscular bodies, and the ability to hunt large animals using tools.

From Aragao Cave, Tautavel, France, circa 450 000 years old. Original in the Institute of Human Palaeontology, Paris. 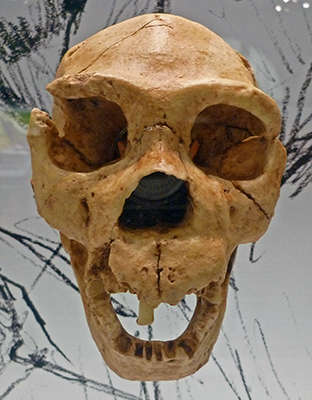 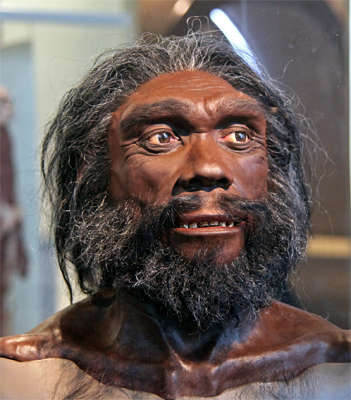 Model of the head and shoulders of an adult male Homo heidelbergensis on display in the Hall of Human Origins in the Smithsonian Museum of Natural History in Washington, D.C.

Appearing 700 000 years ago, Homo heidelbergensis is closely related to our own species. 'It has huge brow ridges,' Gurche notes. 'A lot of people think that’s kind of a shock absorber for the face, that it dissipates pressure put on teeth at the front of the skull, if you are using your mouth as a clamp to grip implements or a skin.'

The huge brow ridges tempted Gurche to create a scowling expression, and in fact he had reason to believe that this particular individual wasn’t a happy camper: the model skull had nearly a dozen abscessed teeth. But 'I happened to catch him in a good mood,' Gurche says. 'I wanted that positive feeling to be somewhere in the line-up.' 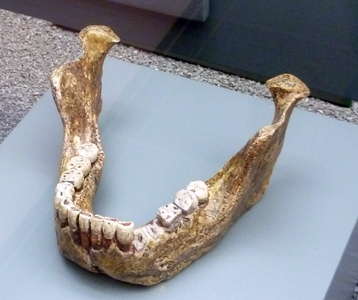 The first fossil discovery of this species was made on October 21, 1907, and came from Mauer where the workman Daniel Hartmann spotted the jaw shown here in a sandpit. The jaw (Mauer 1) was in good condition except for the missing premolar teeth, which were eventually found near the jaw. The workman gave it to Professor Otto Schoetensack from the University of Heidelberg, who identified and named the fossil. 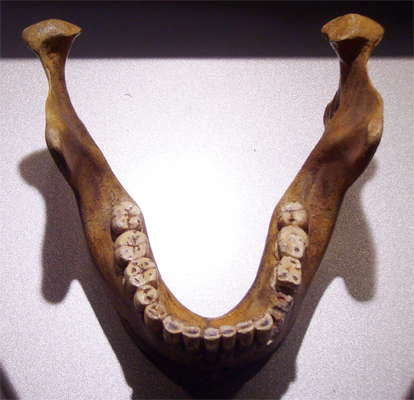 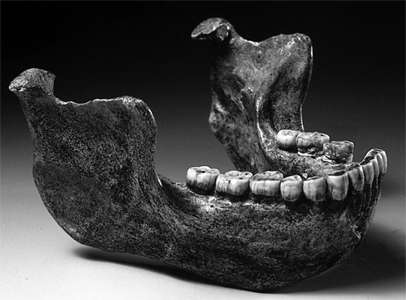 Stratigraphy of the sand pit Grafenrain at Mauer with the find horizon of the Homo heidelbergensis mandible in the lower sands.

Left photograph is taken from the original monograph, with the find site (x); right photograph shows the present exposure. 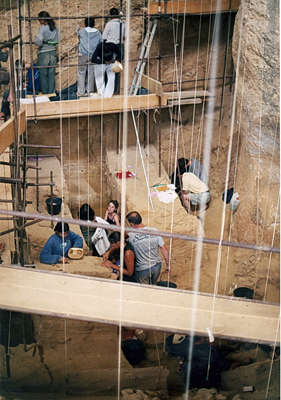 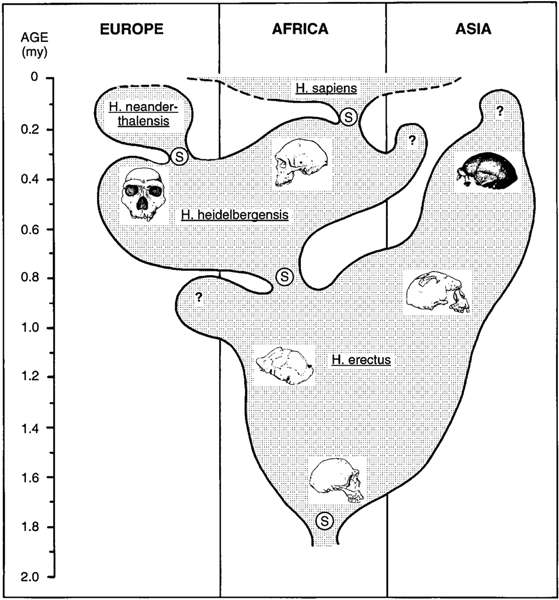 A tree illustrating the evolution and geographic distribution of Homo in the Pleistocene. Homo erectus is assumed to have originated in Africa and then spread quickly to Asia and probably to Europe. 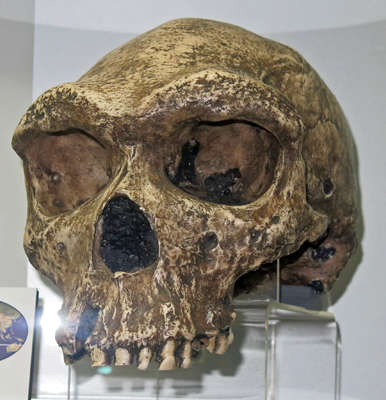 Hominins from Africa, Europe and Asia that lived between about 600 000 and 1 million years ago, such as Homo heidelbergensis, continue the trends seen in earlier forms. They are characterised by larger brains, faces and teeth, with more robust bodies. They hunted a wide variety of game and entered various new environments not occupied by previous hominids. Their stone tools were still Acheulian hand axes and flakes, and their camp sites were simple and appear not to have been used repeatedly. However, the discovery of 400 000 year old finely crafted spears in Germany demonstrates their tool making proficiency.

This skull was the first fossil of a human ancestor to be discovered in Africa. It combines primitive features such as a wide face, thick arching brow ridges and a sloping forehead with a large brain capacity of 1280 cubic centimetres.

This individual had significant tooth decay and a number of associated abscesses had decayed the upper jaw bone. Significant dental decay such as this was unusual in our ancestors prior to the development of agriculture approximately 10 000 years ago when more sugars and starchy foods were included in the diet. 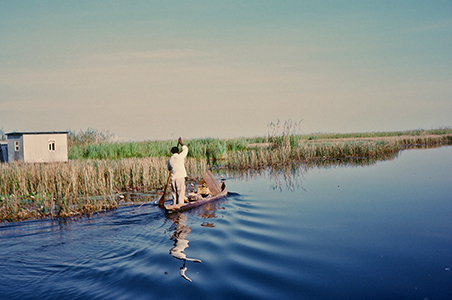 A resident fisherman enters Lukanga Swamp about 60 km west of Kabwe, Zambia. Fisher families live in papyrus shelters on floating mats of vegetation within the swamp. The national bird, the fish eagle, may be seen hunting for its prey in the swamp. 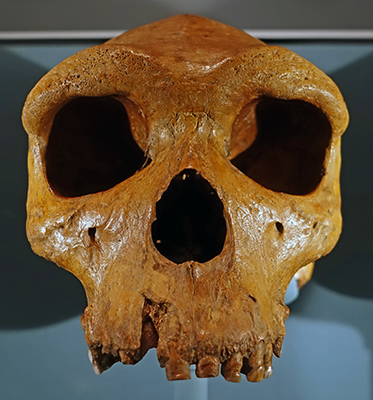 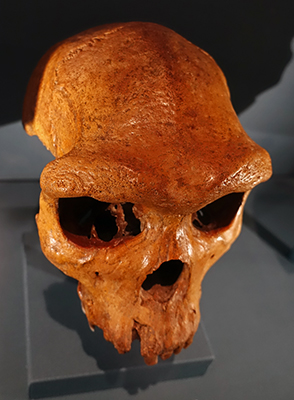 This was the first early human fossil discovered in Africa. It has a wide face, large brow ridge and a large brain capacity of 1 280 cm3, as large as many humans today. thick bony ridges at the back of the skull would have supported strong neck muscles.

Searching for metal ore deposits in the limestone caves of Kabwe, Zambia, Swiss miner Tom Zwiglaar is credited with finding the first early human fossil ever to be discovered in Africa. When Kabwe (also known as Broken Hill, Broken Hill 1, and BH1) was sent to Arthur Smith Woodward, Woodward assigned the specimen to a new species: Homo rhodesiensis. Today, most scientists assign Kabwe to Homo heidelbergensis. 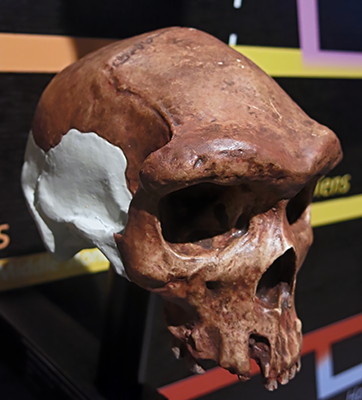 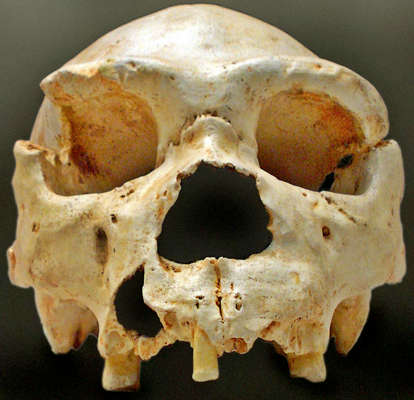 Cranium 5 is one of the most important discoveries in the Sima de los Huesos, Atapuerca (Spain). The mandible of this cranium appeared, nearly intact, some years after its find, close to the same location. 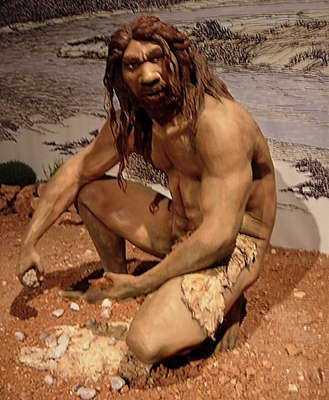