Like many cavities in the gorges of Ardeche, Cave of Two Openings has long served as a sheep shelter and as a shallow abri. Generations of shepherds have used it to drive their sheep into at night for protection from wolves and the weather, and as shelter for themselves, sitting around a fire, eating freshly killed lamb, good bread, and perhaps even sharing a bottle of wine. So, even though in 1878, a local teacher Léopold Chiron reported the first parietal engravings in Chabot Cave, in the last bend of the gorge, near Aiguèze, opposite Ranc Pointu, it was not until 1984 that the cavers could pass beyond a massive stalagmite obstructing the passage that excavations and surveys were organised there in 1987, and engravings and bones were discovered there.

Excavations were undertaken twenty years later to study the Palaeolithic remains, and since 2008, at the instigation of Julien Monney, young Swiss archaeologist, a project related to the rock art has been pursued on a multidisciplinary level: archeology, drawings of engravings , pigment analysis, sampling and dating. Before man came the cave was occupied by the cave bear. There are many bones and traces of walls polished by animals living in the darkness. Dated to 28 or 30 thousand years ago, the cave is contemporaneous with Chauvet Cave.

Julien Monney, who is the scientist responsible for the Projet Datation Grottes Ornées, and who directs research in both la Grotte des Deux-Ouvertures since 2008, and the Grotte aux Points d'Aiguèze since 2011, has revealed sixty graphical entities, including 52 figures identified as very fine engravings which made use of the natural terrain, concentrated in an area at the end of the cavity. Mammoths were well represented, as was the aurochs. At the very end of the decorated area, there was an engraving representing an apparent hybrid between an aurochs and an ibex, the meaning of which has not yet been elucidated.

The gorges of the Ardeche between the Combe d'Arc and the upstream side of the river Ibie to the site of Saint Martin around Ranc Pointu downstream are a mecca for rock art. The little sister of the Chauvet cave tells of the time when human groups lived by hunting and gathering, before the beginning of agriculture. 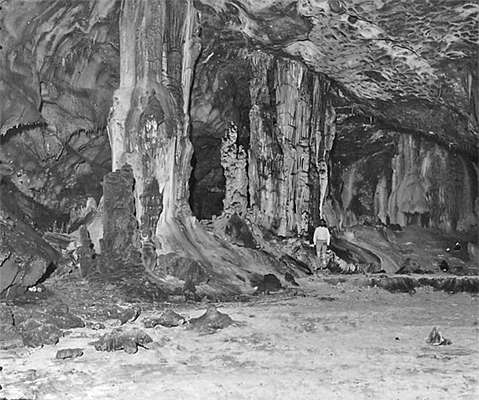 Photo of the Grotte Deux Ouvertures 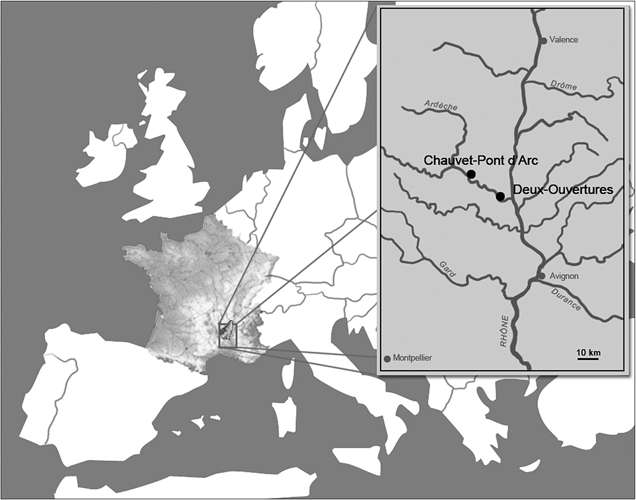 Map of the location of Grotte Chauvet and Grotte Deux Ouvertures. 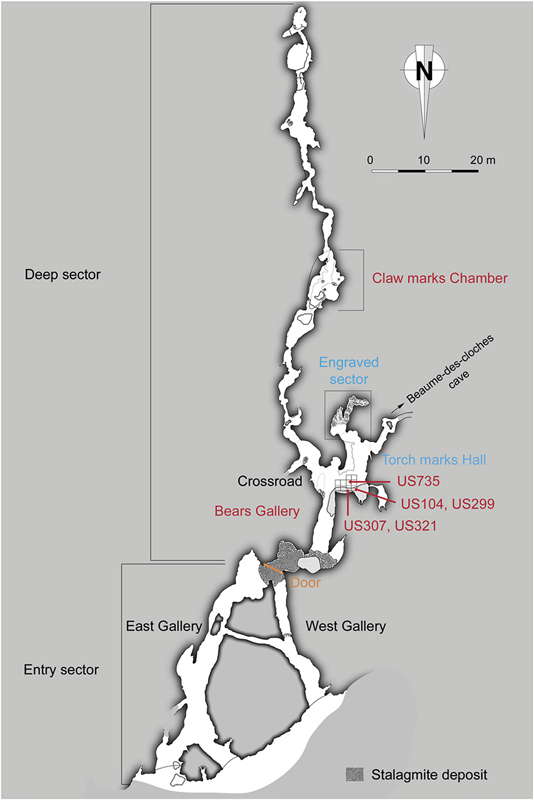 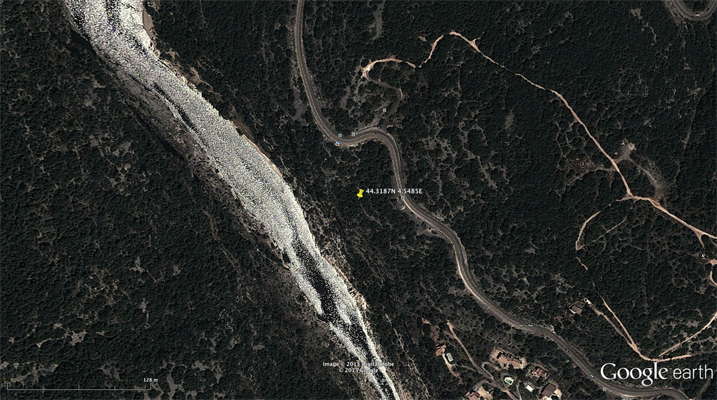 It was formerly used as a sheep fold, a place to put sheep at night for protection from wolves and inclement weather. 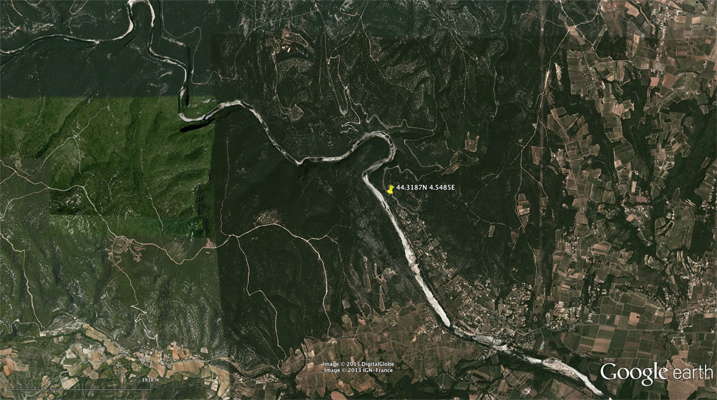 The site is at the eastern end of the Ardèche River Gorge, after the last incised meander, just as the Ardèche reaches open, flat country. 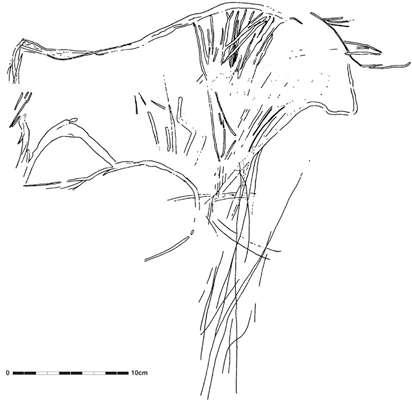 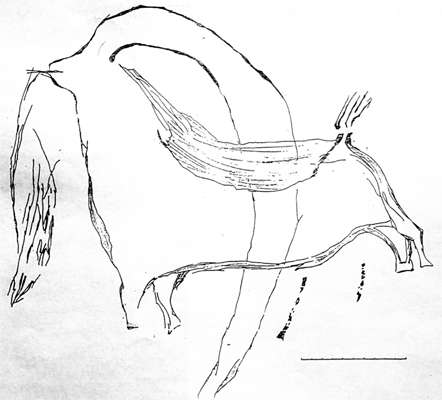 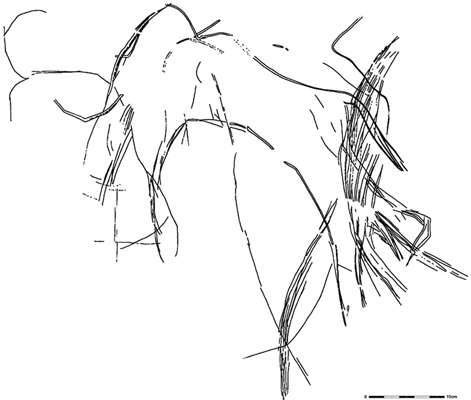 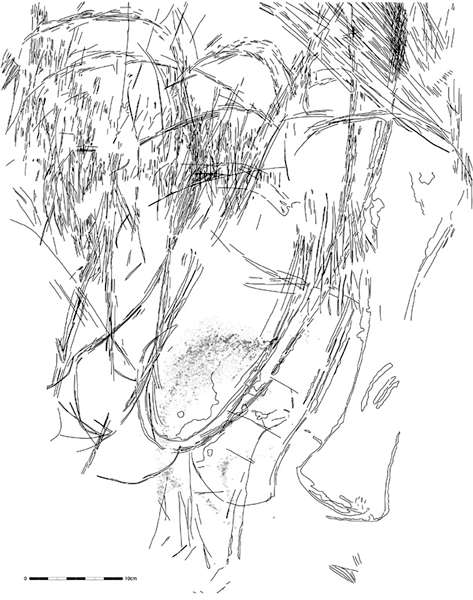 Drawing of the Angle Panel, including amongst others the Mammoth DEE-12 and the back half of the ochre drawing Ocr-06. There are at least three legs, and a trunk which continues vertically out of frame. Apparently two very large complete mammoths thus extend beyond the boundaries of this drawing. 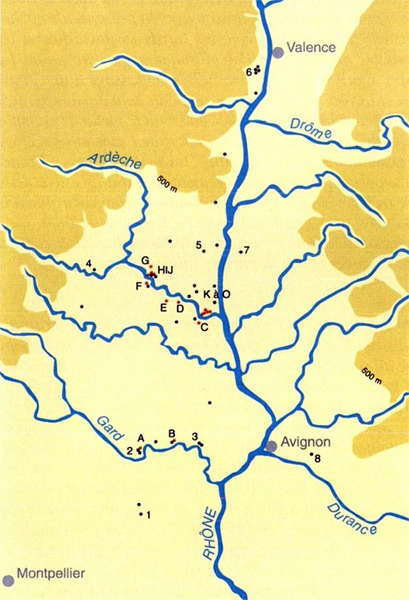 Upper Palaeolithic sites of the Ardèche and neighbouring areas.

Bovid and two heads of Ibex painted in red. Dotted signs in a quadrangular pattern. 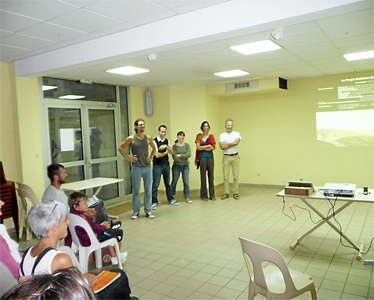 Julien Monney and his team at a presentation of his findings in Grotte Deux Ouvertures.

Date and venue: probably Friday, 23rd September 2011 at 18:30h at the multipurpose hall of Saint-Martin d'Ardèche, when Julien Monney was the presenter of a conference on La Grotte des Deux Ouvertures. 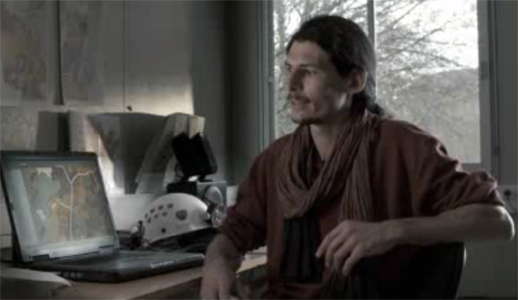 Julien Monney is an Archaeologist, a PhD student at the University of Paris X Nanterre, an expert unicyclist, and a former circus performer.

He is the first (amazing!) performer on the unicycle in this video.

He is shown in this photo talking about Chauvet Cave in a still from the film 'Cave of Forgotten Dreams', 2010.

The PCR Datation des Grottes Ornées which was initiated in 2008 in several decorated paleolithic caves in the gorges of the Ardèche was continued in 2009. It essentially concerned three sites in which a series of investigations was carried out: la grotte des Deux-Ouvertures, la grotte de la Tête-du-Lion et l’aven de la Genette.

The objective of this project was to acquire a better knowledge of the chronological phases of human and animal occupancy of these cavities and the parietal ornamentation they contain through a plurality of chronological approaches (dating 14C AMS of parietal samples and charcoal in the stratigraphy and bones, but also to study the methods of decoration and so on. The general idea was to develop a multidisciplinary approach allowing the cross referencing of historical data from several areas that either chronometric (14C, U / Th dating etc..) or relative (overlapping sequence, stratigraphic sequences, etc.)

The campaign in the year 2008 was mainly devoted to surveys and inventories. In 2009, research mainly focused on operations sampling and analysis.

At l’aven de la Genette and at la grotte des Deux-Ouvertures, many charcoal marks from the impact of torches hit on the wall to keep them burning were collected for dating. Similarly, in this second cave, samples of charcoal and calcite were collected in the layers of calcite formation which covered the decorated area. These samples were dated respectively by 14C and by the Uranium/Thorium methods. Where the charcoal and calcite were deposited at essentially the same time, the comparison of dating results will give a better understanding of the date at which the passage was closed to the entry of men and bears.

At the same time, a 3D scan of the entire cave was completed by the Edytem team. This highly accurate digital model allows for the understanding of the way that the massive stalagmites were deposited, as well as the past morphology of the filling of the clay floors in the galleries frequented by the Paleolithic visitors. It also allows for a better understanding of the flow of water in the cave, and serves as a basis for assembling the photographic record of the parietal engravings.

Analyses of pigments using X ray fluorescence were conducted using a portable device. This non-destructive method allows for a big increase in the number of analyses of graphical elements without resorting to any collection of the original pigments. Amongst the black pigments of the grotte des Deux-Ouvertures, one deposit was found to include manganese and silicon. Its composition was not the same as that of the surrounding natural deposits, and the reason for this choice is not known. At first glance, one would expect the deposits to consist of the local black manganese. Furthermore, this approach allowed the identification of significant quantities of zinc as part of the black encrustations on the walls. In the context of the karst nature of these deposits, the question of the genesis of these deposits arises.

During the course of recording the engravings of la grotte des Deux-Ouvertures, a figure at the end of the cave has raised many questions. Indeed, despite its schematic character, it could consist of a composite half-man, half-bovine such as we know from Gabillou or Chauvet. Its position and its integration within a complex composition are consistent with the hypothesis which reinforces the idea of a highly structured underground space. Similarly, the head of a striated bison previously considered headless was discovered during these surveys. It materialises when one considers the natural reliefs of the cave wall which form the eye (described by just a few lines), the forehead, the nose and the dewlap. Four new 14C AMS were obtained. The two results from the 2007 campaign are fully consistent from a chronostratigraphic perspective, and indicate ages between 28 000 BP and 29 000 BP. These dates were obtained from charcoal found in situ, taken over and under an indurated horizon (marking a cessation of sedimentation, or soil trampling). Although there may have been other times during the Paleolithic when the site was occupied, these findings allow the age of the engravings on the walls to be determined. They provide new material for the discussion of the great antiquity of rock art in the Gard-Ardèche-Hérault region.

Charcoal taken from the floor has produced ages of around 5 800 BP to 6 000 BP. Their location in a very well circumscribed area of the cave, at the foot of the gallery carrying the Baume des Cloches casts doubt on the conclusion that it reflects the actual dating of the cave at the beginning of the Neolithic. They may have ended up there after the removal of archaeological deposits of la Baume des Cloches.

Finally, at la grotte de la Tête-du-Lion, the coupe from the excavation there in 1963-1972 was recut, which allowed the collection of more samples of charcoal(?). These elements presented in the form of small black particles which in some cases may not be charcoal. They were situated however almost exclusively at the height of the layers which were identified in 1972 as being Solutrean. Two pieces of stalagmite from the floors capping the sedimentary sequence were also collected. Finally, the screening of the material in increments of 6 to 10 cm allowed the collection of some types of microfauna, which should provide some interesting paleo-environmental information.