Golubac - a fortified medieval town on the Danube 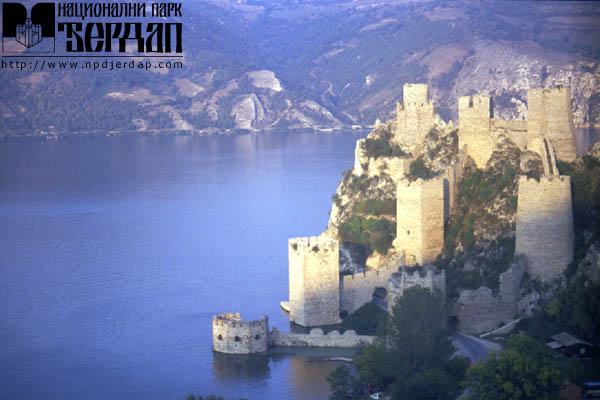 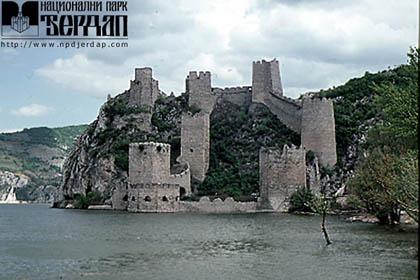 This is the fortified medieval town of Golubac, built on inaccessible rock above the river Danube, at the point where the riverbed begins to narrow, thus facilitating monitoring of all traffic across and along the Danube. It is supposed that it was built by Hungarians, probably in the second half of the 13th century, to defend their land on the right bank of the Danube. The fortress has nine towers, between 20 and 25 meters high, five of which belong to the older and four to the younger phase of building. They are connected by fortress walls, with average width of 2.8 m. the strategically important position of the town caused many battles under its walls. The town changed hands many times between 15th and 18th century, with Turks, Hungarians, Serbs and Austrians taking turns in ruling the town. 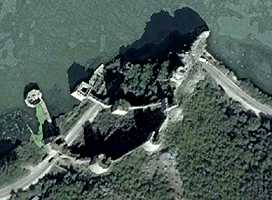 Satellite photo of the Golubac site.

Map of the Iron Gates region, with the position of Golubac marked on the right bank of the Donau / Dunarea, near Gaura Chindiei II.


Another version of the history:

The city is situated on the right bank of the Danube at the very mouth of the Djerdap gorge. It was built on the rocky slopes of a small hill, the offshoot of the Homolje mountains. The ramparts of the city follow the configuration of the terrain. Nine massively built towers are mutually linked by a rampart and distributed so as to provide defence for the city both from land and from water. They are all tetragonal except for the dungeon which is polygonal in the lower section and cylindrical in the top one. Its form has given it the name of "hat tower" In the eastern part, above the palace, there is a small round tower. The form of the towers indicates that the city was built at a time when battles were waged with cold steel. With the discovery and use of firearms the towers on the west side received polygonal or cylindrical, massive reinforcements up to two meters thick. The internal towers retained their square shape. At the same time a Turkish tower of polygonal form was added with cannon embrasures and galleries arranged in two tiers. The part of the rampart connecting it with the rest of the city has been preserved. On the western side of the city was an outlying suburban section. The time of the city's founding has not been established and the first written record of it dates to the year 1335. Golubac had a tumultuous history: it was in the hands of the Hungarians, of the Turks, and, in the end, in the possession of the Serbian state. Exploratory and conservation works started in 1969 and were completed in 1987.