A hunter camp of the Stone Age

The card on the display read:

Which translates as Venus from Nebra, 15 000 years old, bone, original, on loan from the Landesmuseum.

(note however that other sources state that this Nebra Venus is of reindeer antler. It is number two in the four images below - Don ) 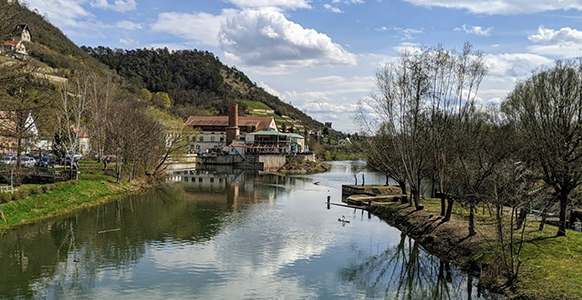 Three venus figures (figures 1, 2, 3) and an anthropomorphic figurine from Nebra. The objects appear to be facsimiles.

Sculptures of women seen in profile, from Nebra.


The following text is adapted from Wikipedia:

The Nebra figurines are highly stylised statuettes dating from the late Upper Paleolithic ( Magdalenian ) and are the oldest known works of art in Saxony-Anhalt. They date from 14 000 - 13 000 BP and were discovered in 1962. The figurines are now in the permanent exhibition at the Vienna National Museum of Prehistory.

The figures were found in the summer of 1962 during an emergency archeology rescue dig at an ancient castle in Unstruttal northeast of Nebra. The site was a 120 square metre open air site used by hunters in the late Upper Paleolithic, 14 000 - 13 000 BP, the Magdalenian. The excavators, Volker Toepfer, Helmut Hanitzsch and Dietrich Mania, discovered about sixty pit-like depressions and parts of a light red coloured flagstone pavement on a semi-circular area of 9 m × 3.5 m, where the Stone Age traces had been partly destroyed by a later Bronze Age settlement and a medieval moat.

Most of the pits had a depth of more than half a metre and contained besides a large number of types of artefacts made ​​of stone, antler and bone well preserved remains of game animals and sandstone slabs, which had evidently served as wedges for the tent poles. The analysis of the animal bones showed the fauna was composed mainly of wild horse and reindeer. Furthermore, a hare , arctic fox and ptarmigan were found. Thse finds indicate a winter campground of Paleolithic Ice Age hunters and suggest an early stage of the Magdalenian.

The four extremely simplified statuettes have a length from 52 mm to 66 mm. In side view, three of them have the silhouette of a human body, with a rod-shaped torso and buttocks accentuated. In addition, they are undecorated and have been created without head and feet. Due to the partially indicated breasts, these are most likely to representations of women. The fourth figure differs from the aforementioned female statuettes. Although it has the same base as the female figurines, the upper body is represented differently.

Figure 1: This is made of light yellowish ivory. The long, straight, rod-shaped top, which is inclined slightly to the rear, shows no hint of a breast. The bottom section is over-emphasised and has a convex-triangular form.

The statuette was in pit 50, formed from six thin, vertical sandstone slabs with dimensions of approximately 20 × 30 cm. The joints between the stones were filled with bone and the shoulder blade of a horse. A 60 × 70 cm long horizontal sandstone slab covered the stone box. Many bones and bone fragments, especially of horse and reindeer , and a broken piece of travertine limestone, which may have been used as an oil lamp, grease lamp or as a sacrificial vessel, were incorporated into this pit. Also included in the pit were some forty blades and flint flakes, and 25 tools of various types. The pit and the stone box were coloured with ochre.

Figure 2 : This figurine is carved from reindeer antler. The colour is grey-white with a reddish tinge. The base tapers from an exaggeratedly convex buttock.

By contrast the top, with prominently crafted breasts, is slightly tilted backwards.

This female figure came from the tent pole pit 33. The pit had a circular plan and was sunk 65cm into the ground. Also included in this pit were some forty bones or bone fragments, 15 tools, 11 burins and 57 blades and flakes.

Figure 3 : This figurine has been carved and polished, and, like the first figurine, is made ​​of ivory. This woman figurine was found, broken, in the tent pole pit 7.

The pit had a cylindrical shape with a diameter of 30 cm. It also included about eighty bones, bone fragments and fish vertebrae. Furthermore, were found in this pit twenty tools, twelve burins, eighty blades and flakes from white patinated flints.

Anthropomorphic figurine : this stylised, anthropomorphic figure of ivory was found in the pit 22. Its lower part is shaped like the female figurines, with their backs forming a kind of hump. It also has a slightly forward-sloping head.

According to the described features, the Nebra venus figures are assigned to the Gönnersdorf style of figurines.

Characteristic features of the 'Gönnersdorf style':

Overall, there are currently about 95 statuettes of the 'representation principle of Gönnersdorf' from 17 sites. 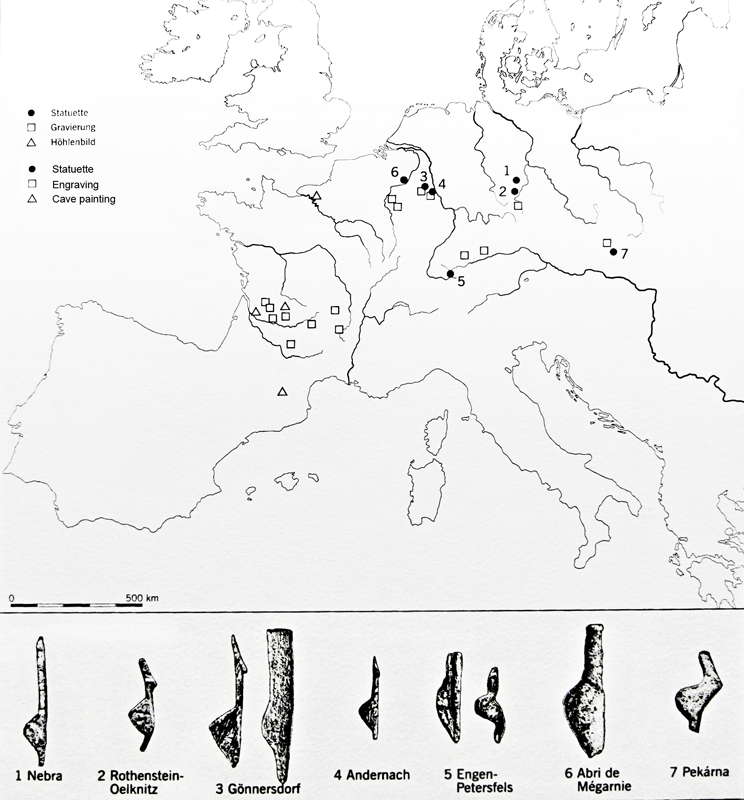 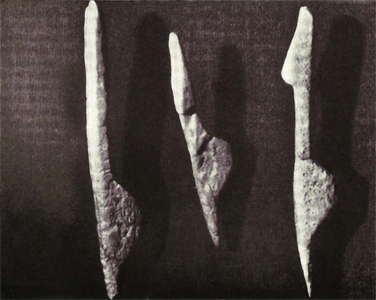 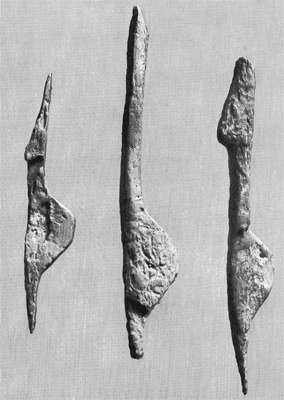 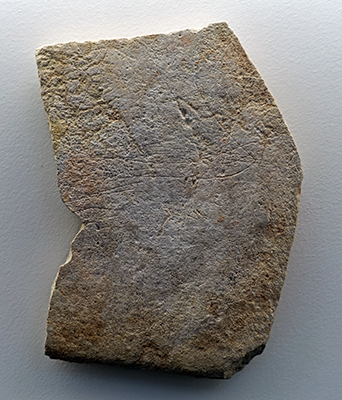 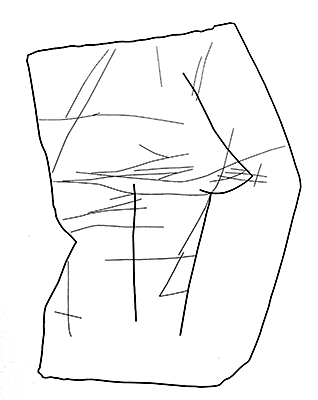 Sandstone slab with an engraving of the outline of a woman.

Besides stone tools there are two engraved stone plaquettes. One of them, a probable female figure of Lalinde-Gönnersdorf type, was very finely engraved and is barely visible. The second plaquette shows numerous engraved lines, some of them in parallel order. 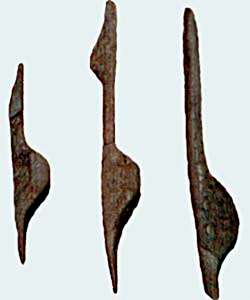 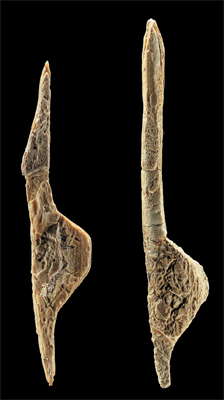 These are the venuses on the extreme left and right of the photo above. 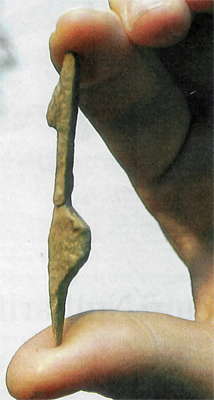 Another version of the original Venus of Nebra. 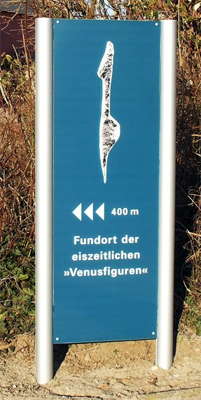 Sign leading to the site of the Nebra Venus.

The cold climate at Nebra was countered with windproof clothing clothing and sturdy tent huts. More than than ever before, effectively shaped tools allowed the precise processing of a wide variety of raw materials: For example, scrapers for fur processing, fine drills, sewing needles made from bone and antler, and burins for for the extraction of the needle blanks.

The effort expended in the manufacture of clothing was not only not only for its protective function, but also an obviously increased need for representation, including carefully pierced canine teeth of predatory animals canines of predatory game and deer, as well as snail shells, which were threaded into necklaces and pendants. Red, white and black colours were also used to ornament leather. There is no doubt that these signs of the aesthetic sensibility are also signals of individual identity and thus a component of social communication. 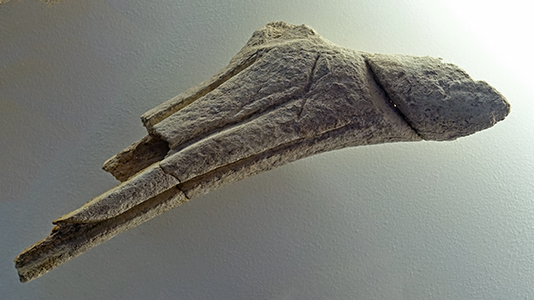 Reindeer antler fragment. The grooves are formed by the extraction of needles. 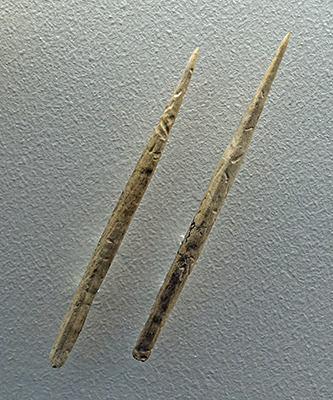 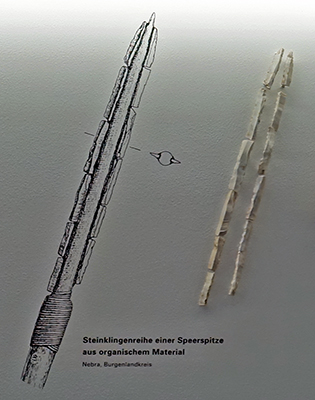 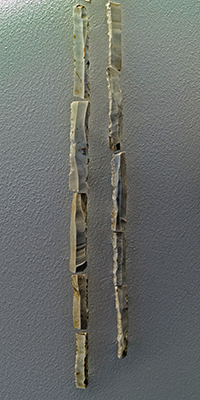 (left) Microliths placed in a row along a groove on an organic spear head.

(right) Close up of some of the microliths. Note how uniform they are.

( One of the reasons for the greater leisure time that the people of Nebra had to create beautiful carvings and venus figures was that they had embraced much better methods of hunting. A good knapper could turn out dozens of microliths in a very short time, each of which was razor sharp, and took very little of the good quality flint used.

However when glued (probably with birch bark glue) along a groove in a spear head which was itself then attached with cord whipped to the main shaft of a dart thrown by an atlatl, the result was lethal.

The spear head thus became very sharp at its point, and stayed narrow along its length, meaning that the spear head could penetrate the prey easily, and was driven deep into the body, creating a significant wound with resulting shock (internal loss of blood) which brought the prey down very quickly, meaning that no time was wasted tracking a wounded animal. A clean kill also meant that the spear head and shaft could often be reused because little damage to the dart ensued - Don )