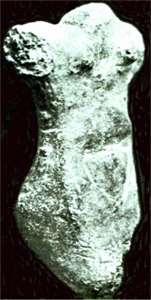 The Venus of Craiova, Romania

(? This seems too old if the Venus is from the Salcuta culture, which is in the aeneolithic, at most 5 000 years BP - Don)

Salcuta culture is from the late neolithic, and used ceramics. Copper metallurgy was well developed, and in Romania the culture was expressed in the area southeast of Banat, Oltenia, and west of Valachia.

Anthropomorphic statues, dominated by female representations, were made in bone or clay.