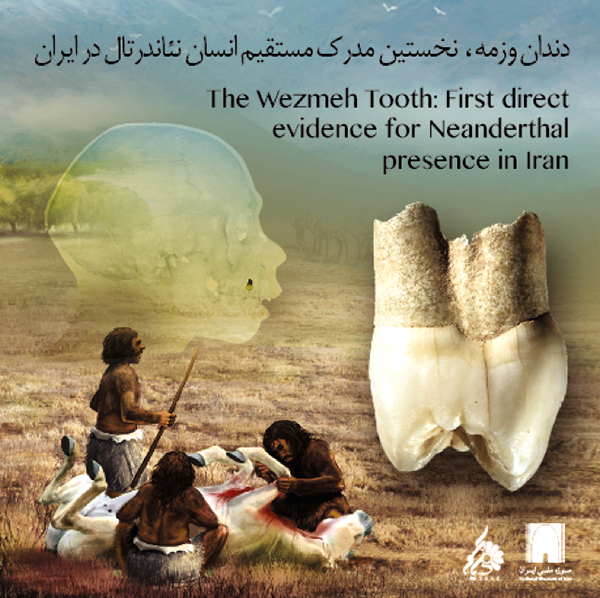 Source: Courtesy Fereidoun Biglari, Head of the Palaeolithic Unit of the National Museum of Iran 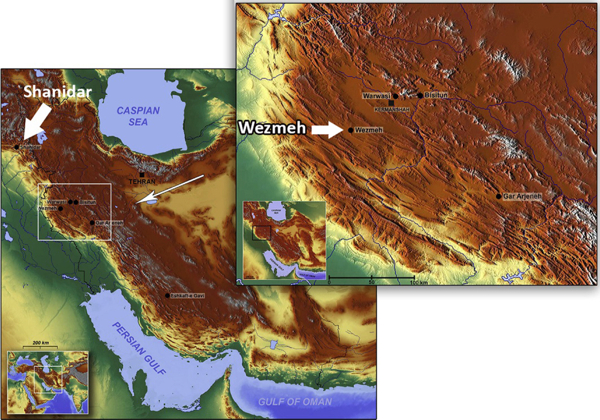 
Wezmeh Cave was recorded during the second season of survey of the Islamabad Plain in 1999. The most remarkable feature at the site was a heap of debris in and around the cave mouth and on the slope leading to the cave as may be seen in the photograph.

According to the locals, the cave deposits were partially dug out in 1995 by clandestine diggers in a futile search for ancient artefacts. Our inspection suggested that the area targeted by clandestine diggers was towards the middle and rear sections of the cave, particularly the latter where in some places five metres of deposits were removed and dumped further upfront and on the slope in front of the cave mouth.

A brief inspection of the back-dirt produced a considerable amount of faunal material, especially bones of large carnivores, as well as ruminants and other wild animals. In the debris we also found a flake core and a simple flake, and a handful of pot-sherds, including examples of Coarse Chaff-tempered Buff Ware and Coarse Chaff-tempered Burnished Red-Slipped Ware and a single piece of painted Black-on-Buff ware, all typical of the Early to the Middle Chalcolithic (Copper Age, circa 4000 - 2000 BC) period of the region.

We recorded the Wezmeh Cave as ID87, a possible carnivore den with ephemeral human occupation during the Middle Chalcolithic period. 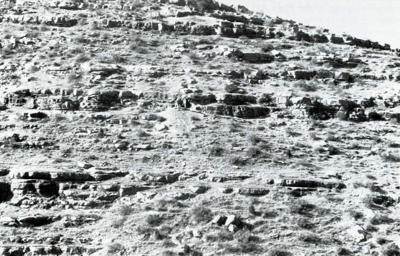 General view of Wezmeh cave looking south. Note the debris dug from the cave and dumped on the slope by clandestine diggers. 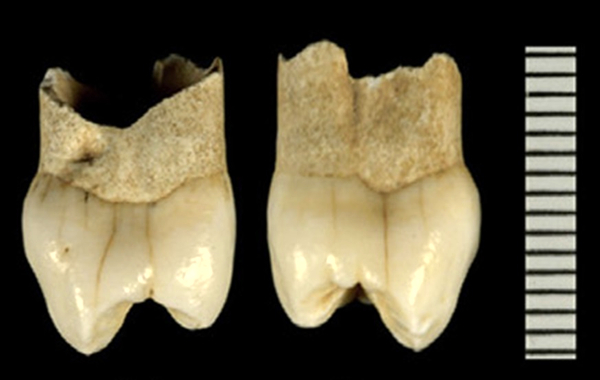 In a recent study, Biglari said the specimen, originally thought to be from a modern human, was re-analysed by Roberto Macchiarelli and Clement Zanolli by X-ray micro-CT imaging that revealed the inner structure of the tooth, especially the enamel-dentine junction, which aligns the tooth closely with Neanderthals and shows that it is distinct from modern humans. He added, therefore, this tooth is the ﬁrst direct evidence of the Neanderthal presence in the Iranian Zagros. 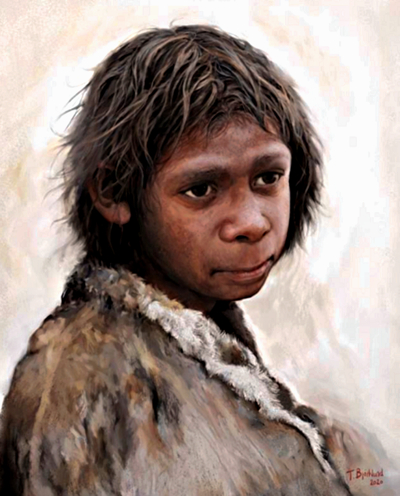 Painting of a 9 year old Neanderthal child by Tom Björklund.

Given that the cave was a carnivore den during late Pleistocene, it is probable that the Wezmeh Child was killed, or had its remains scavenged, by carnivores who used the cave as a den. Within an approximate 30 km radius of the Cave, 13 Middle Palaeolithic sites have been recorded; among them, the nearest sites are located about 10 km to the northwest. The tooth is on display at the Palaeolithic gallery of the National Museum of Iran. 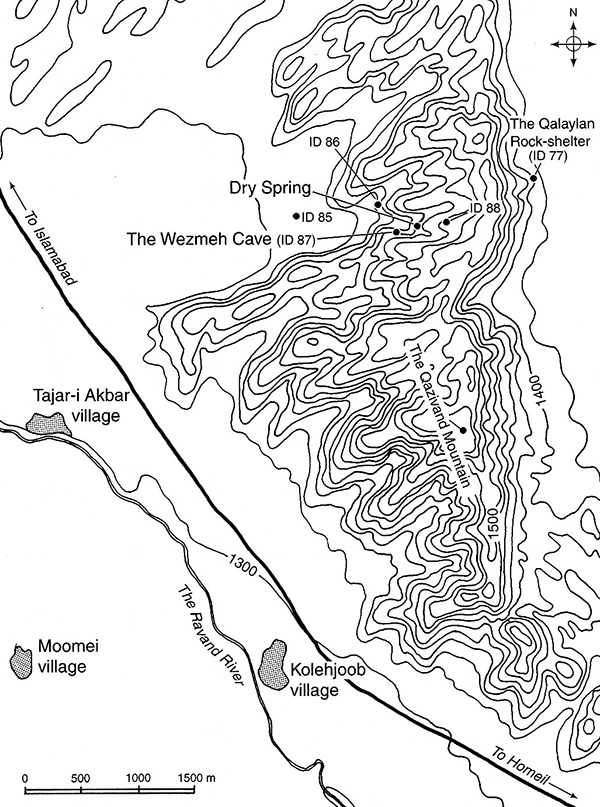 Qazivand Mountains. Map showing the location of the Wezmeh Cave. 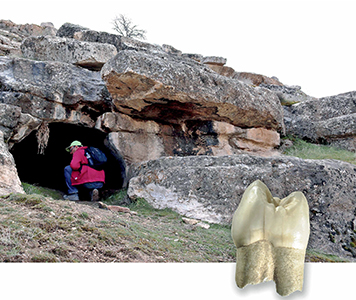 View of the cave entrance, and (superimposed) the Neanderthal premolar found in the cave. 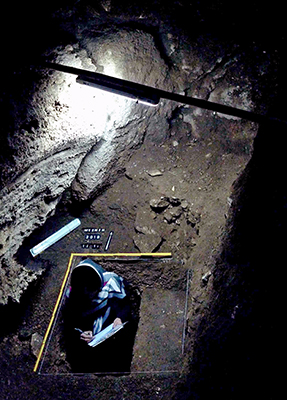 Test excavation at the rear shaft of the Wezmeh Cave. 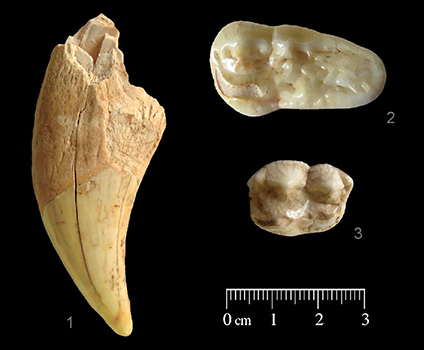 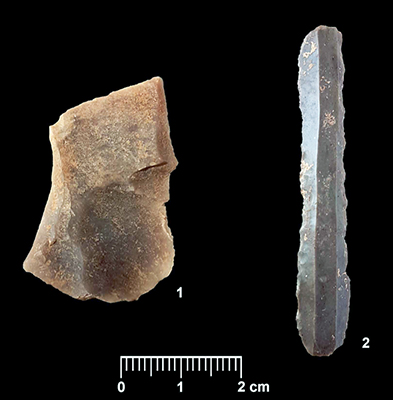 2 Bladelet with steep and continuous retouch.

Wezmeh Cave is located at N34°03'20" and E46°38’42", about 12 km to the southeast of the town of Islamabad-i Gharb and 3.5 km to the northeast of the village of Tajar-i Akbar. The cave is located in a small side valley tucked into the west foothills of Qazivand Mountain.

Qazivand is the southwest side of an unroofed (eroded) anticline, reaching a maximum height of 1558 m a.s.1. on a north-south axis, overlooking to the east the Shiyan and to the west the Islamabad Plains. Wezmeh Cave is located at an elevation of 1430 m a.s.1. about 60 m above the valley floor on a steep slope with a dip of 36°. The mouth of the cave faces north and is 2m wide and 1.2 m high.

The cave is about 27 m long and has an area of about 45 m2 The front-most 12 m of the cave is relatively straight. This section has a low ceiling, only up to 80 cm high in some places. At about 15 m from its mouth, the cave makes a sharp turn towards the west and extends for about 5 m in which the height of the ceiling gradually increases. The floor of this section also has a 13° slope. This section of the cave extends for 5 m and then makes a turn towards the southwest and extends for another 7 m with a steep slope.

The closest source of water to the Wezmeh Cave used to be a spring about 200 m to the east, but this spring has long ago dried up. However, a cluster of a few elm trees (wezm in the local Kurdish dialect; hence the name Wezmeh) around where the spring used to emerge suggests some underground water supplies. Nowadays, the closest source of water is the Ravand River about 4 km to the southwest of the cave.

Wezmeh Cave is in fact a solution feature within the Asmari Limestone Formation that forms the slopes of Qazivand Mountain. The cave is not located in an active karst zone, but rather in a relatively arid area. However, one can see a layer of calcium carbonate created by semi-active flowstones, particularly towards the rear of the cave. It appears that prior to clandestine excavations in the cave, the rear section was filled with sediments, in places 4 to 5 metres deep.

These deposits, which represent thousands of years of sedimentation, can be attributed to a combination of the following processes:

(1) sediments carried by water through cracks and cavities in the cave’s walls and ceiling. In the plateau above the cave there is an open area amenable to sheetwash movements during rainy season,

(3) decomposition of floral and faunal material, or

In terms of texture, colour, and morphological characteristics, the debris left by clan- destine diggers is similar to sediments encountered in test excavations. Macroscopic comparisons of the debris from the rear section of the cave with those from test excavations is presented in Table 1. However, it should be noted that the latter is lighter in colour and has some morphologic features including chalky nodules, predominantly less than 3 cm in diameter. 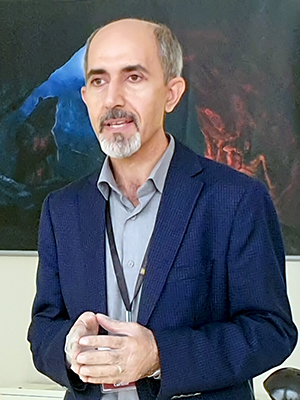 Fereidoun Biglari, presenting a virtual tour of Wezmeh Cave, at the Palaeolithic gallery of the National Museum of Iran, November 2020.

Fereidoun Biglari is the co-founder and head of the Palaeolithic department in the National Museum of Iran which was established in 2001. He is a member of the research council of the Iranian Center for Archaeological Research (ICAR). He is also editor-in-chief of the 'Journal of Iranian Archaeology' since its establishment in 2010. The journal is a scholarly journal about ancient Iran and neighbouring regions. Since 1993, he has been directing archaeological field projects in various parts of Iran. His field of research covers the Lower Palaeolithic of Iran and western Asia and the Middle Paleolithic of Iran in general and the Zagros region (Iran and Iraq) in particular. 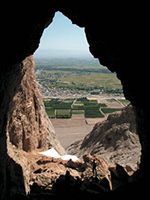 Readers may be interested in this short introduction by Fereidoun Biglari to the archaeology of Iran. 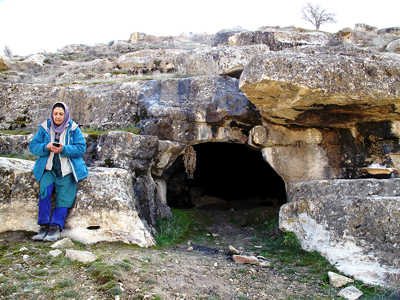 Dr Mashkour is the first Iranian to specialise in the field of zooarchaeology and has been engaged in many field and laboratory projects in Iran and the Near East. 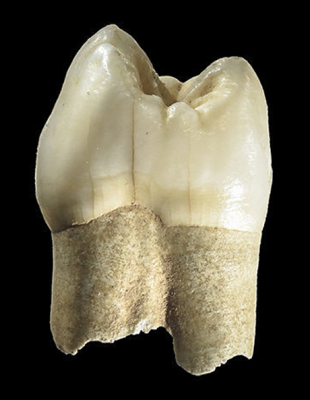 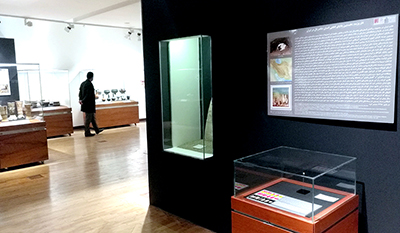 The Wezmeh Neanderthal tooth on display in a temporary exhibition at the National Museum of Iran- February 2020.

Photo: Courtesy Fereidoun Biglari, Head of the Palaeolithic Unit of the National Museum of Iran 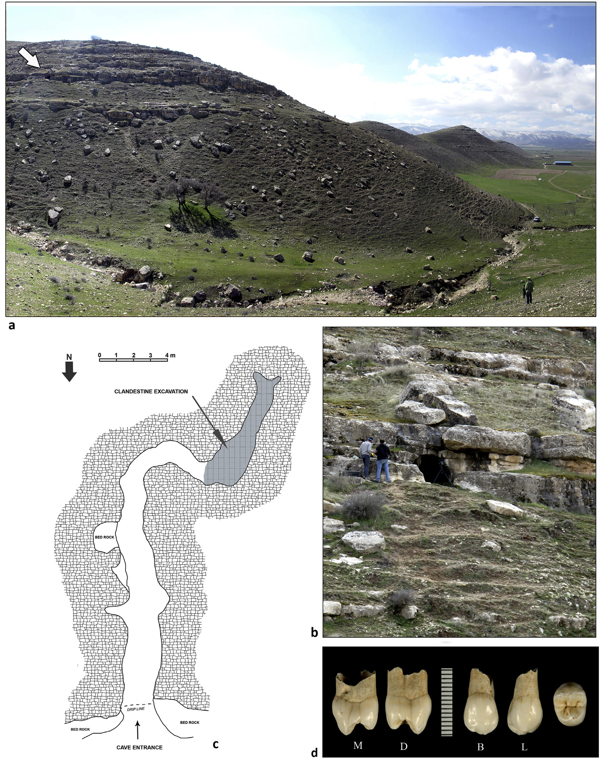 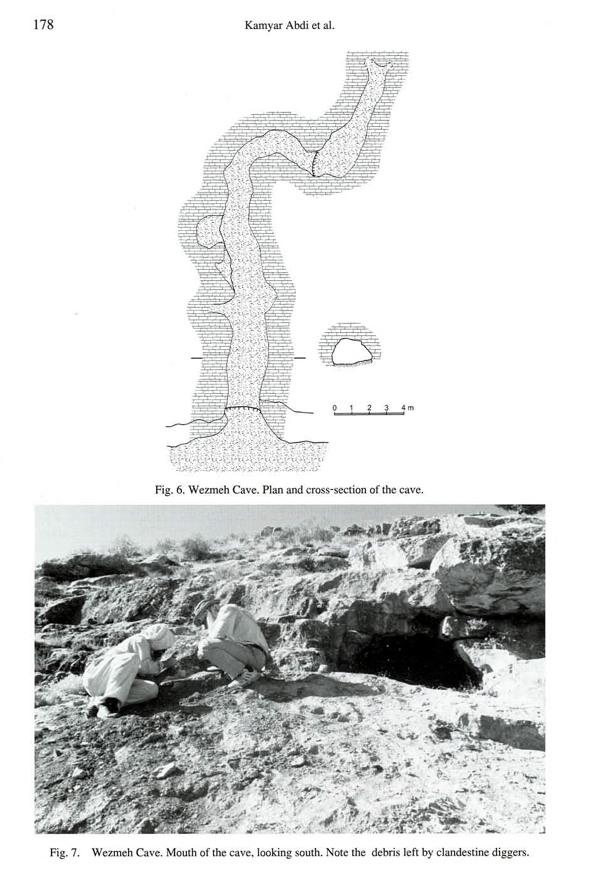 Plan and photo of the exterior of Wezmeh Cave.

We continued our probe of the debris all the way up to the relatively flat area before the cave mouth, where we opened an exploratory 3 x 3 m trench called T(hreshold) T(est) T(rench). We excavated at TTT, the Threshold Test Trench, to a depth of about 70 cm, clearing the area from back dirt that contained some bones and a total of 12 sherds and 2 lithic artifacts. 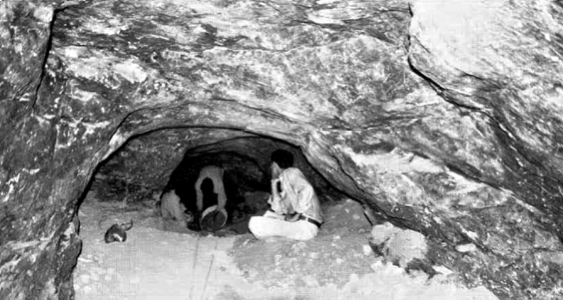 Inside the cave, low ceiling of the middle section. 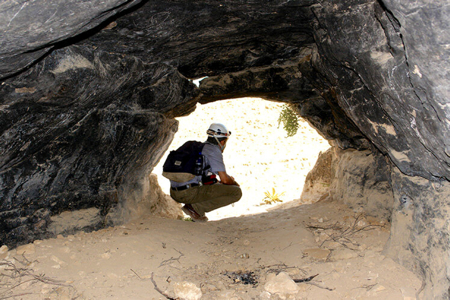 Entrance of Wezmeh Cave, view from inside. 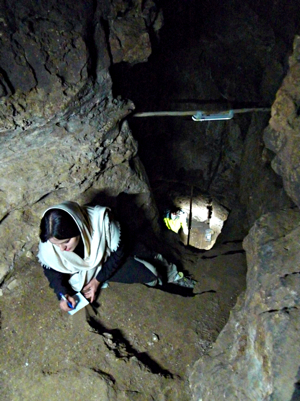 Dr Shidrang has led several field projects in the Central Western Zagros and recently has initiated a fieldwork project in the Southern Zagros to compare the Middle and Upper Palaeolithic sequences in different regions of this Iranian mountain range.

In her research, she attempts to understand the patterns of human behaviour in Late Pleistocene settlements of the Zagros Mountains, particularly in the Middle to Upper Palaeolithic transition and the beginning of Upper Palaeolithic, through the study of different aspects of lithic artefacts.

Photo: Courtesy Fereidoun Biglari, Head of the Palaeolithic Unit of the National Museum of Iran
Text: Adapted from https://conversationsinhumanevolution.wordpress.com/2020/08/11/conversations-with-dr-sonia-shidrang/ 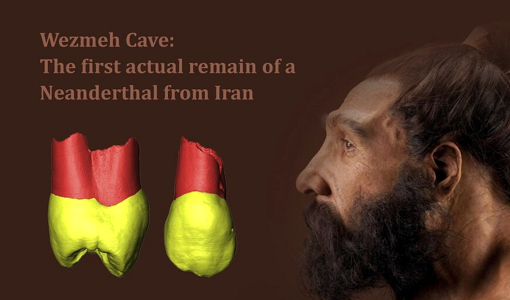 A new find, recently published in the Journal of Human Evolution, suggests that Neanderthals were roaming at the Iranian Zagros Mountain sometime between 40 to 70 thousand years ago. 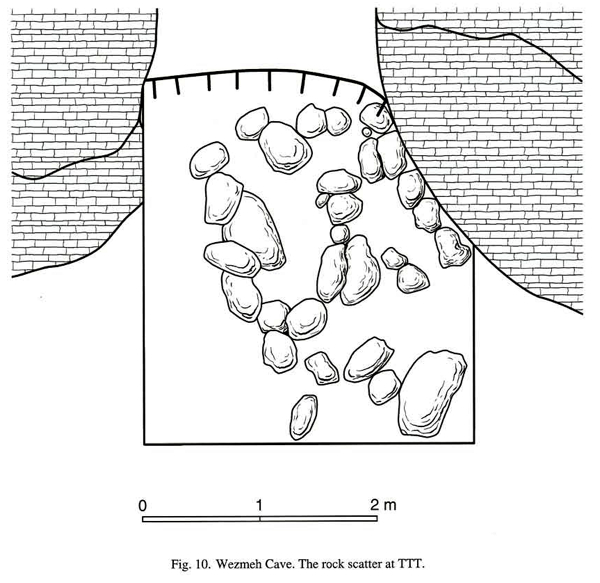 Further beneath the back dirt we found a concentration of rocks scattered around in the general area of the cave mouth. This scatter of rocks is particularly interesting. Our local workers believe that this scatter may have been the remains of a collapsed dry wall built by people to block the cave mouth and to protect them and their animals inside from approaching carnivores.

Another argument put forward by our workers was that the rocks may, again, be remains of a dry wall, build by people to seal the cave in order to asphyxiate, by burning wood and bushes, wolves that had attacked their flock and might have been hiding in the cave. This proposition may find some support in soot-covered cave walls. 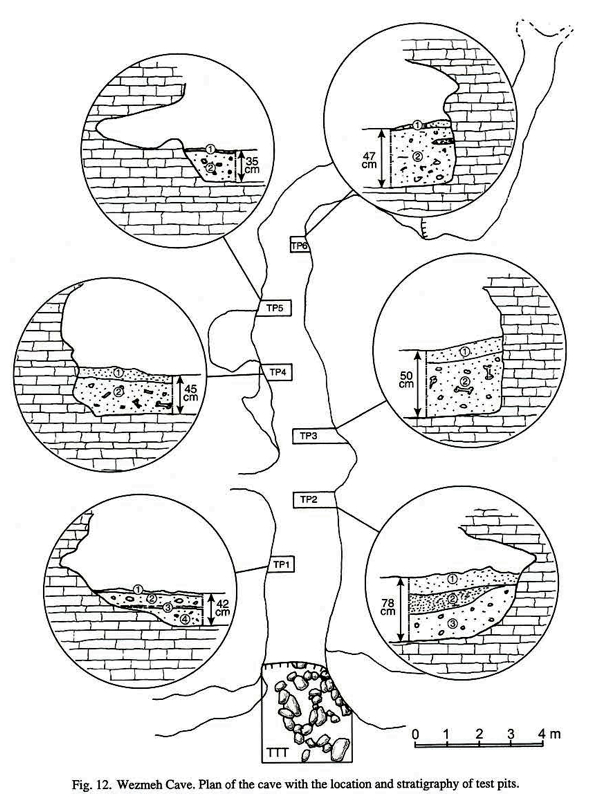 Note that carnivores made up 74.1% of the total minimum number of individuals (carnivores and ungulates). 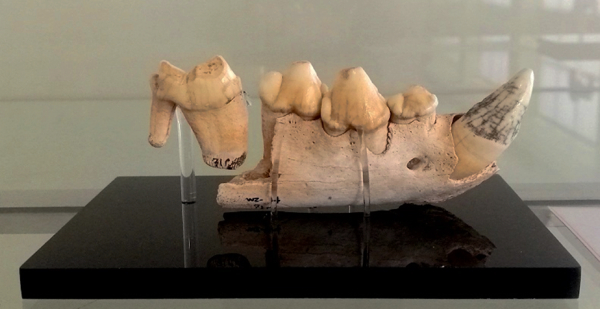 Hyena mandible on display at the Palaeolithic gallery of the National Museum of Iran.

Photo and text: Courtesy Fereidoun Biglari, Head of the Palaeolithic Unit of the National Museum of Iran 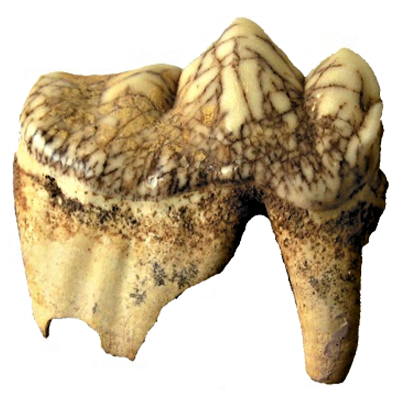 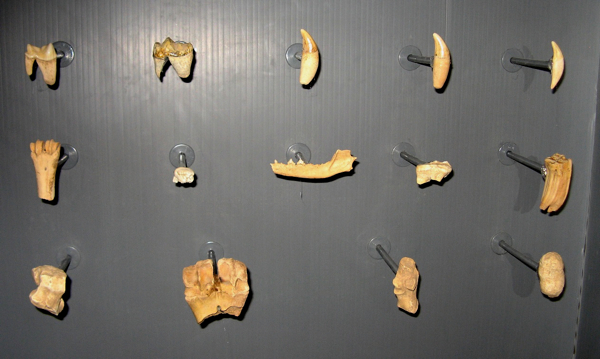 Zagros Paleolithic Museum (Persian: موزه پارینه‌سنگی زاگرس‎) is a museum in Kermanshah, Iran, established in 2008. The museum contains a large collection of stone tools and animal fossil bones from various Paleolithic sites in Iran. In Iran, it is the only museum of its kind.

The museum was established by Fereidoun Biglari and A. Moradi Bisetouni at Tekieh Biglar Baigi, Kermanshah in 2007. Marjan Mashkour, a zooarchaeologist, was in charge of animal fossil identification for the museum. 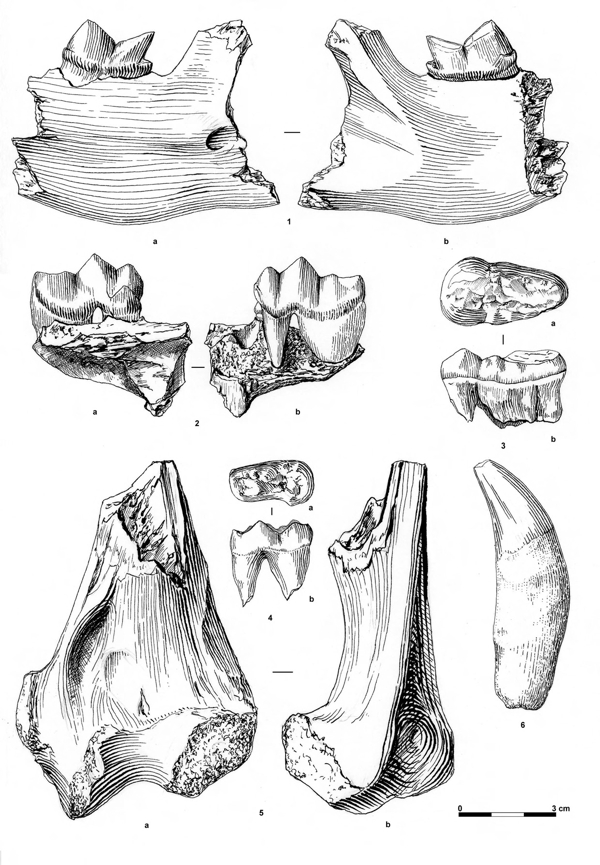 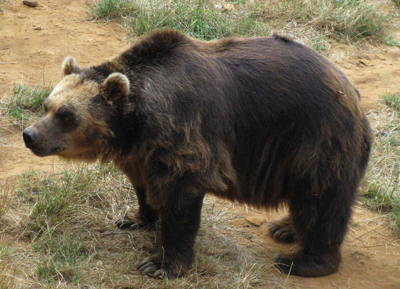 The bears at Le Regourdou are safely well below the visitors, and there is a wall to lean against. However there was an abiding sense of menace to the bears. I would not like to fall into the enclosure and be subject to their tender mercies. 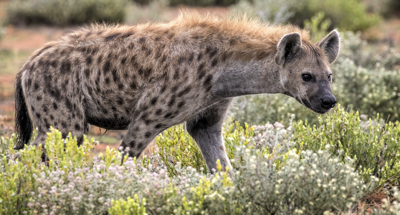 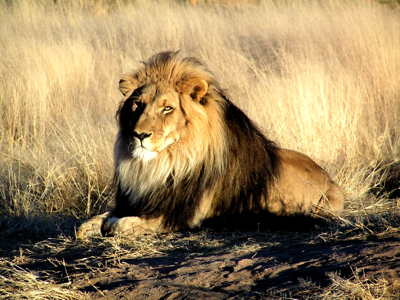