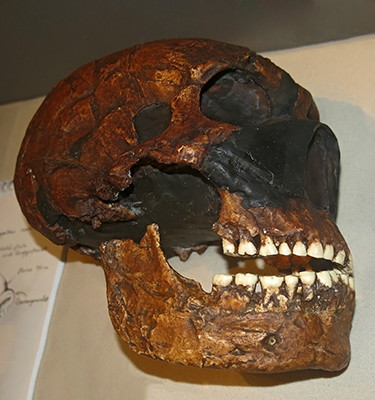 Amud 1 is a nearly complete but poorly preserved adult Neanderthal skeleton thought to be circa 50 000 years old. It was discovered at Amud in Israel by Hisashi Suzuki in July 1961, who described it as male. With an estimated height of 178 cm, it is considerably taller than any other known Neanderthal, and its skull has by far the largest cranial capacity (1736 - 1740 cm3 ) of any archaic hominin skull ever found, making it one of the most famous specimens of Neanderthal skulls.

The skull was found very high in the stratigraphy and was not only mixed with Upper Palaeolithic artefacts, but also with pottery from levels further above. Because of this the first two published dates of Amud 1 and other remains were not taken seriously when they suggested an extremely recent time (by Neanderthal standards) of 28 000 BP and 20 000 BP. It has since been redated by ESR to about 50 000 BP.

Like other Neanderthal specimens in the Levant (such as Tabun C1 and the Shanidar specimens), Amud 1's skull is long, broad, and low, with an especially large nose and a big face, pronounced midfacial prognathism, and a large palate and lower jaw. To the contrary of other Near Eastern Neanderthals, its brow ridges are slender and its chin, though still minimal by modern human standards, is somewhat developed. Although Amud 1 is considerably taller than any other known Neanderthal, its body is stocky, robust, and has short limbs, similarly to the cold-adapted bodies of Classic West European Neanderthals.

Suzuki initially interpreted these features as intermediate between Levantine Neanderthals (the Tabun and Shanidar specimens) and Levantine anatomically modern humans (Skhul and Qafzeh). In 1995, Hovers et al. (1995) argued that its cranial and mandibular particularities made it fully Neanderthal, and this is now the accepted classification.

The skeleton is currently held at Tel Aviv University, Israel.