Decorative objects from the Stone Age 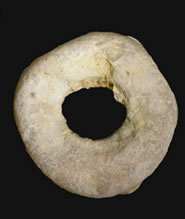 Stone Age beads revealed by archaeologists on Wednesday could be the strongest evidence yet that humans developed sophisticated symbolic thought much earlier than once thought.

The ostrich egg beads and numerous other artefacts, including ochre pencils, carved bone and stone tools, were recovered from the Loiyangalani River Valley, in Serengeti National Park in Tanzania.

The archaeologists who discovered the relics have yet to date them precisely, but believe they originate from the African Middle Stone Age - between 280,000 and 45,000 years ago. This is because they were found in a sedimentary layer along with many items characteristic of the Middle Stone Age.

The ostrich egg beads are about 5mm in diameter

They believe that the carefully worked ostrich beads, which have no use as tools, provide the clearest evidence to date that humans could think symbolically before 35,000 years ago. That is the time when artwork and sophisticated artefacts start to appear commonly, although so far only outside Africa.

"I'm fairly sure that these items are very old, and if that is so this could be a very important site," says Audax Mabulla, one of the archaeologists behind the find from the University of Dar er Salaam in Tanzania. "The beads are unambiguous examples of symbolic behaviour."

The ostrich egg beads were probably made by cracking ostrich eggs, boring holes into the pieces and then smoothing them. Ethnographic records show that similar pieces of jewellery are often used by modern hunter-gatherer groups for trading or other forms of social interaction.

But not everyone is convinced that the Loiyangalani find proves that the earliest "modern" humans had similar mental capabilities and social structures.

"It is certainly debatable whether ostrich egg beads are symbolic,"says Paul Pettitt, an archaeologist at the University of Sheffield in the UK. "If they can convincingly date them, they also need to demonstrate that they are symbolic rather than simply decorative."

Pettitt also points out that 70,000-year-old ochre crayons, covered with carvings that might have symbolic relevance, have already been recovered from the Blombos Cave in South Africa. Mabulla and his US colleagues acknowledge this, but argue that the ostrich shell beads are much less ambiguous.

Fossil records show that Homo sapiens evolved in its current physical form around 120,000 years ago. But it took some time for modern behaviour to develop and be expressed in the artefacts that are found today.

The scientists presented the findings from Loiyangalani at the Paleoanthropology Society Meeting in Montreal, Canada on Wednesday. The items were all excavated by an international project known as Serengeti Genesis.

This version is from the text edition of New Scientist:

Two small beads made of ostrich eggshell may be the earliest evidence of symbolic thinking in humans. If the beads are as old as researchers believe, they would show that humans possessed this faculty tens of thousands of years earlier than previously thought.

The ability to attach meaning to objects - in jewellery or art, for example -requires complex abstract thought and is at the root of human culture. The earliest uncontested evidence is from sites in Europe that are about 35 000 years old, and includes ornaments and cave paintings. But the beads were found in Africa and seem to be between 45 000 and 110 000 years old. Plants found at the site suggest the older end of that range.

Anatomically modern humans appeared between 120 000 and 160 000 years ago. Most of the artefacts found from this time are strictly utilitarian stone tools. But there seems to have been a "symbolic explosion" beginning about 35 000 years ago. Suddenly humans were painting figures on cave walls, making decorations and ornaments, and burying their dead in ways that suggest ritual.

Was there really such an abrupt change? Richard Klein, an anthropologist from Stanford University in California, has suggested that about 50 000 years ago a genetic mutation made the brain capable of language and other abstract thought. But others believe the development was more gradual. Evidence of earlier symbolic thinking could have been missed, they say, because most of the digs have been in Europe, where humans arrived relatively late.

Recent digs in Africa have unearthed items such as highly polished bone points from 70 000 years ago that don't seem to have a practical use, and ochre that may have been used in decoration, found on a 92 000-year-old site. But neither is as convincing as the beads, which are clearly decorative. They were found in the Loiyangalani river valley of the Serengeti National Park in Tanzania, and are fragments of eggshell that were smoothed and rounded, with a hole so they could be strung onto a fibre. Jessica Thompson from Arizona State University, Tempe, presented the findings at a meeting of the Paleoanthropology Society in Montreal, Canada, last month.

Experts in the field are cautious about the discovery. "The real test will wait on larger scale excavations," says Richard Milo, an anthropologist at Chicago State University. But he says the find "more than warrants greatly increased attention to this area".

Klein says he cannot judge the beads'importance until they are radiocarbon-dated, as it is possible the site is not as old as believed, or that artefacts from a later time got mixed up with earlier ones. "if the date comes out as greater than 40 000 or 50 000 years ago, that would be very important."

Steven Mithen, professor of early prehistory at the University of Reading, UK, says an earlier date would not surprise him. But he points out that archaeology can't show when people began to think symbolically, only when they began to make lasting symbolic objects. "I think we ought to assume they had symbolic thought. To think there were Homo sapiens without it is bizarre to me," he says.