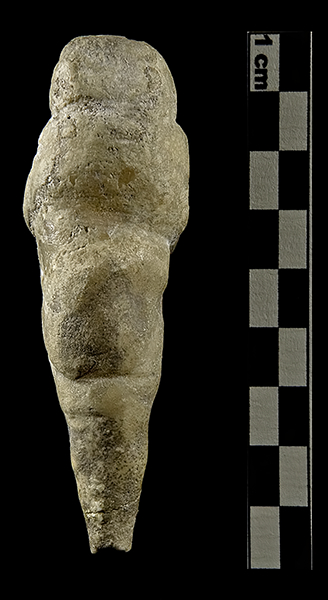 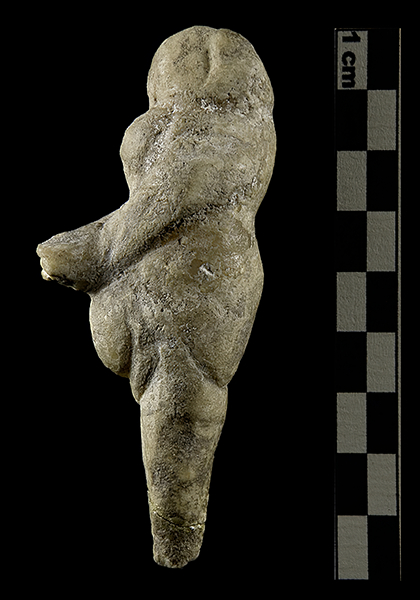 The Venus of Frasassi, front, back, and side.

Carved from a piece of stalactite. Upper Palaeolithic, between 28 thousand and 20 thousand years ago.

(The face is barely shown. Breasts are large, and placed high on the chest. A navel is shown on the full abdomen, and the vulva is clearly shown in relief. Legs taper to about below the level of the knees, which are not shown, when they are broken off or were never carved.

Most unusually, the forearms extend well in front of the body, as though they were used to hold something. It is difficult to be sure from the photo, but it seems that the head has been carved in two portions, with a groove between the front and back - Don ) 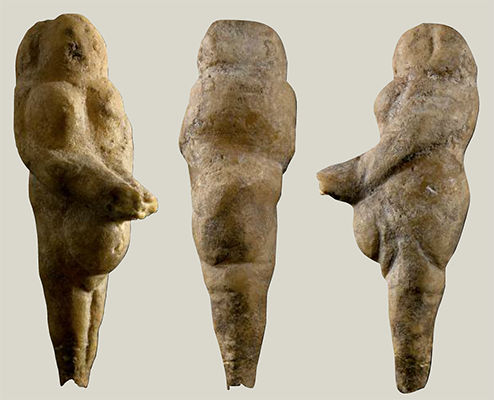 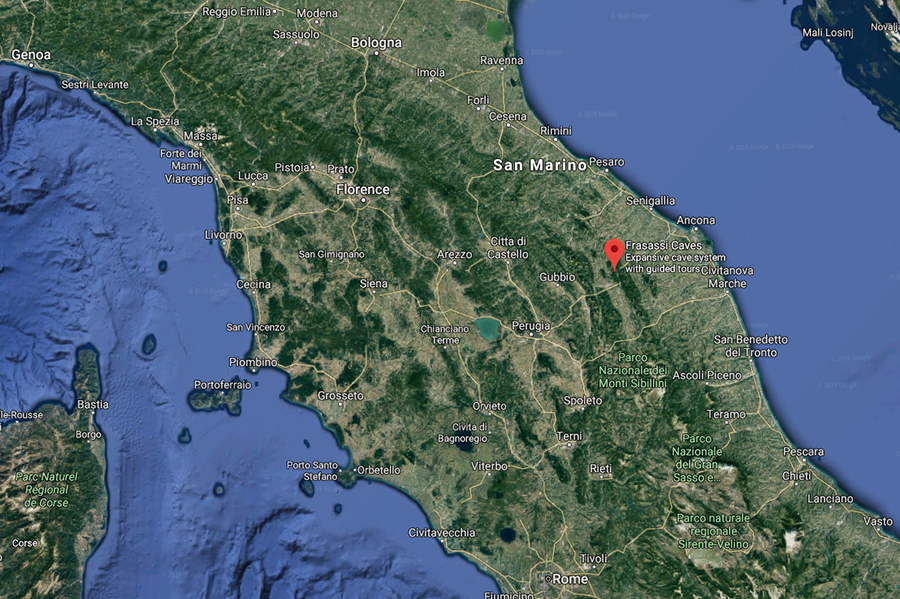 The Frasassi Gorge is a particularly picturesque limestone gorge of the Marche Apennines, carved by the Sentino River, tributary of the left bank of the Esino River. Many cavities, very popular with tourists, open along their very steep walls. The discovery of the statuette was made in the Grotta della Beata Vergine di Frasassi or 'del Santuario', located in the central part of the gorge, on the left bank. Access to the cave is provided by a path that leads to the great sanctuary built in the early nineteenth century by the will of Pope Leo XII who entrusted the realisation to the architect G. Valadier (Bellenghi 1835). In a gallery at the entrance is the Infra Saxa Women's Romanesque Hermitage, which used either the atrium or a small spring. From the atrium, a large gallery leads into the interior of the cavity which, because of the richness of these underground environments, has become a destination for speleological excursions. The cavity is also well known for the fossiliferous deposits of the atrium and for archaeological research which revealed occupation levels dating back to the early Neolithic. A review of the archaeological context and tools has established that, from Chalcolithic to the Bronze Age, the cave had a ritual value. Unfortunately, most archaeological deposits were destroyed during the construction of the sanctuary.

During an excursion in 2007, Sandro Polzinetti found the Venus in the access ramp leading into the cavity. The piece most likely came from the nearby wall with Pleistocene and Holocene deposits. Preliminary research focused on the geomorphology of the cavity, to understand the context of the occupation. In addition, stylistic analyses were conducted and analyses of workpiece shaping techniques are underway.

The cave, characterised by a wide opening, is 310 m above sea level and about 100 m above the bed of the Sentino River, in the Frasassi Gorge. The latter are carved in Jurassic limestone intersected by fluvial erosion. Along the gorge walls are alluvial deposits dating back to the cold Pleistocene phases, subsequently incised during interglacial periods. 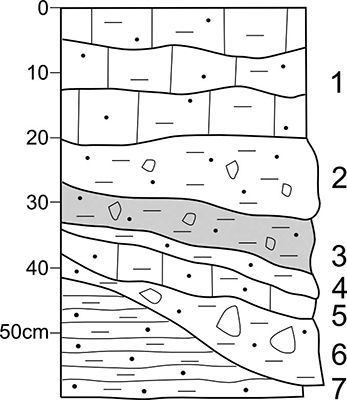 The interior deposit, corresponding to which the Venus has been identified, is constituted from top to bottom by:


The statuette: description and observations

The statuette was shaped from a stalactite. The configuration of the body follows the axis of growth. The degree of elaboration of the support is varied. The dorsal part is less detailed than the front. The state of preservation is fair, if we exclude the breakage at the end of the legs and a recent flaking at the end of the arms, which meet above the prominent belly.

The surface of the statuette is characterised by a light polishing, the origin of which could be either anthropic, such as its original handling or its original conservation in a leather pocket, or post-depositional and therefore taphonomic.

Morphology of the frontal surface

The head has two lateral grooves which seem to delimit a hairstyle or a hat. The position of the head, which, on several Gravettian statuettes, is lowered forward, is here straight ahead, as it is for the so-called 'Punchinelle' in steatite, for 'Abrachiale' and for the 'Ivory Lady' in ivory from Balzi Rossi.

Two small depressions in the front of the head suggest the eyes but the intentionality of this detail is yet to be verified. The separation between the head and the bust is barely outlined by a groove below which are the breasts, in an asymmetric position and with slightly different dimensions. Below the breasts are the very long arms, whose posture may have been determined by the morphology of the original piece of calcite. They appear almost leaning on the belly, prominent, and could thus indicate a state of pregnancy. The pubic triangle is very obvious. The legs, separated by a simple groove, have the shape of a truncated cone.

Morphology of the dorsal surface

Morphology of the right and left profiles:

The two profiles highlight the articulation of the parts of the body and flattened buttocks. The left profile in particular shows that the horizontal groove separating the buttocks of the thighs goes up along the hip.

Observed at a macroscopic level (magnifications of 6x to 10x), they consist of a series of furrows with blunt edges, of different width, which outline the outline of the trunk, head and limbs. It is not possible to identify the beginning of the paths of the grooves and the presence of multiple passes of the tool to complete the operation.

The statuette is very unusual considering the type of support as well as the iconography, particularly as regards the posture of the arms. However, overall, the style suggests an attribution to the category of so-called Gravettian 'Venus' , of which many features are well recognisable in the figurative structure. The use of speleothems is not very frequent in Gravettian art. In the Italian repertoire, there are pieces of movable art from the late Upper Paleolithic (Late Epigravettian) on stalactite and stalagmite plates. These are naturalistic or geometric engravings of Grotta Polesini and Fondo Focone. Other examples are known in the Upper Paleolithic of France: the Venus of Tursac and the Venus of Sireuil on calcite, and the fragments of stalactites with traces of shaping from the grotto of the Moulin de Laguenay go back to Gravettian; engravings on stalagmite plates of the Town Hall cave in Teyjat are attributed to the Magdalenian. Obviously, the choice of the original blocks of these movable art forms was dictated by variable requirements (colour, ease of workmanship but also local raw material available and evocative forms). 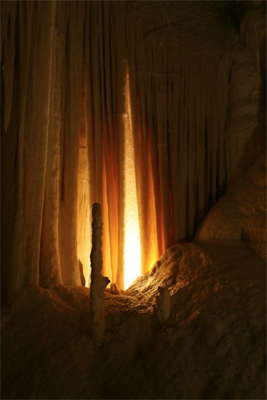 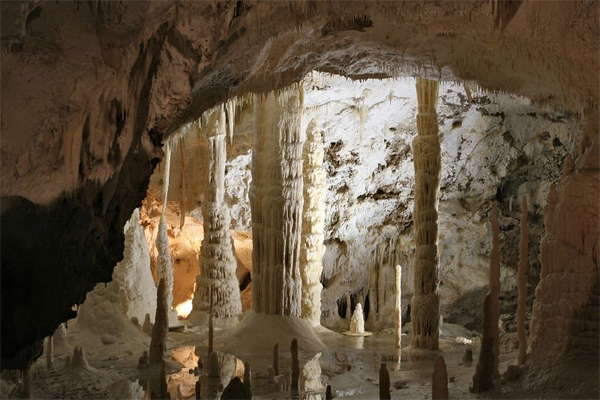 Grottes di Frasassi are a remarkable karst cave system in the municipality of Genga, Italy, in the province of Ancona, Marche.

They are among the most famous show caves in Italy. The formation on the left is known as the organ pipes. The caves, discovered by a group of Ancona speleologists between 1948 and 1971. Rich in water, the cave system is particularly well endowed with stalactites and stalagmites.

The Venus of Tolentino.

This piece was also on display with the Venere di Frasassi at the Museo Archeologico Nazionale Delle Marche di Ancona, in the exhibition from November 27, 2009 to March 30, 2010. This is a figure carved with a burin on thin chert, height about 13 cm. The drawing depicts a woman with zoomorphic features. It has legs, breasts, and a geometric vulva, but the body is surmounted by a cow's head (or a herbivorous animal, bovid or equid).

It was so called because it was found in a clay pit east of Tolentino, in 1883, and then donated to the Museum by Count Aristide Silverj Gentiloni, who immediately realised what an extraordinary exhibit he had.

The Venus de Tolentino has been dated to a period between 5 000 and 12 000 years ago, between the Pleistocene and Neolithic, when agriculture developed in Europe. The stone on which the Venus is carved was probably used as a tool striker, or to crush seeds. Both ends are chipped from use. 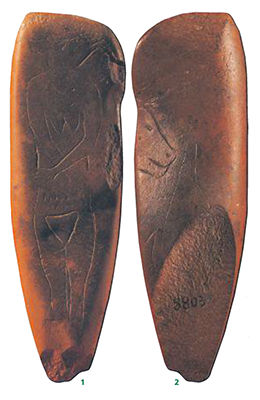 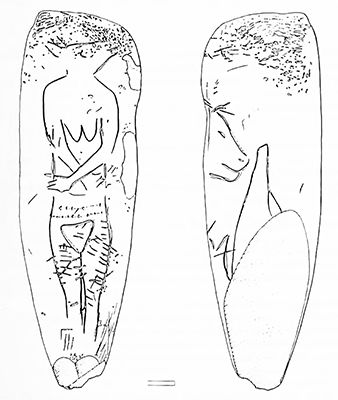 Line drawing of the Venus of Tolentino. Note the pairing of the venus with a herbivore's head, as well as the aurochs head on the other side.

The piece has been exposed to weathering, probably in the bed of a stream.

Current location: Museo Archeologico Nazionale delle Marche, Ancona
Inventory Number 8803
Support: An elongated sub-triangular stone, with a cross-section that tends towards planoconvex, smooth but with some natural depressions.
Raw material: chert
Length 127 mm, width 41 mm, thickness 21 mm
Weight: 150 g
Conservation: There are no modern changes
State of the surfaces: very glossy. Presence of deposits of calcium carbonate (pseudomycelia) and holes from lichens (perithecia).
Colour (Munsell): 10 YR 5/6. 10 YR 4/3
Front side The piece is engraved with a female figure, in a frontal position, with the head of herbivore in profile, turned towards In the left and upward. The muzzle is elongated, with rounded ends and slightly convex.

The eye is indicated by a short curved line. The breasts are small and triangular, suggesting a pointed shape and a pendular position. They have no nipples and are perfectly symmetrical.

The arms are shown folded on the torso, with no detail in the elbows. The arms intersect at the waist, with the left forearm delineated more clearly than the right. The left hand ends with three fingers side by side, with the right arm and hand less clearly shown. The right hand is incomplete and schematic, with only two fingers side by side. It is unclear whether the missing fingers were deliberately omitted. The line of the left hand has two downward projections which might be interpreted as the thumb and the index finger. In this case, however, the hand would be depicted with the palm forward, and thus in an unnatural position.

Immediately below, the pelvis, at a point a little below the waist, is crossed by a double row of short vertical dashes 6 above and 10 below, connected by a transverse finely engraved line. Below there is a nearly equilateral triangle, face down and heavily engraved, which marks the pubis. This pubic triangle has the two upper vertices rounded, and the lower vertex open at the point where the line of separation of the legs begins.

The line of the flanks is interrupted by one of the hands, which partially overlaps it. The hips are not marked and the line continues to indicate the outlines the thigh and the leg, after a slight inflection at the knee. The two legs are clearly separated by a double line which meets at the pubis and continues down towards the feet which are not shown. This part of the stone has been removed by chipping, but it seems certain that the ends have never been shown and that the delineation of the legs was always incomplete. Also from the knees, the figure has dashes, mostly transverse, superimposed on it, which partly protrude, and partly continue on the inside of the legs.

A profile of a herbivore is engraved on the side. Only part of the head is shown. The face is squat, without a clear indication of the ears and horns. The eye, the nostril and the mouth are outlined.