Readers may be also interested in this page on 'Lucy's baby', Australopithecus afarensis

The most famous fossil is the partial skeleton named Lucy (3.2 million years old) found by Donald Johanson and colleagues, who, in celebration of their find, repeatedly played the Beatles song Lucy in the Sky with Diamonds.

The australopithecines, or southern apes, include a wide range of fossil species that existed in Africa around 4.2 to 1 million years ago. Their common characteristic is bipedalism, which places them within the human lineage. With a skeletal morphology and specific features of the jaws and teeth (dental arch and canine reduction) Australopithecus can no longer be designated as an early ape. However, the reduced brain volume also means it cannot be referred to as a human either. 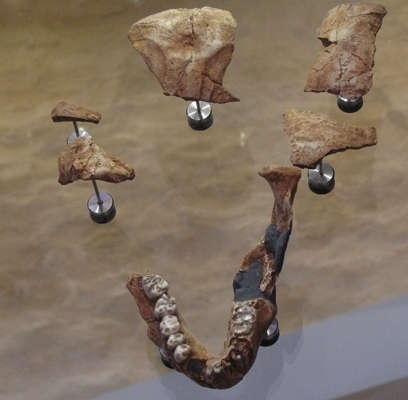 Fragments of the cranium and jaw. 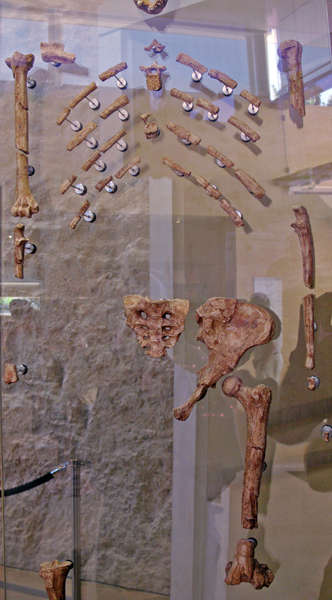 Discovered in Ethiopia in 1974, Lucy belongs to the large family of Australopithecus that lived in Southern and Eastern Africa several million years ago.

These are the first hominids to have small canine teeth and a body adapted to bipedal walking. They do not belong, however, to the human race: the low brain volume (400 cm3 for Lucy, 1300 cm3 for modern man), their powerful chinless face and flat nose more closely reflect current apes.

The skeleton of Lucy has allowed us to reconstruct their body and way of walking: the Australopithicans had a broad chest and relatively long arms compared to the legs, a unique feature in the history of hominids. Lucy walking with waddling small steps and by putting her feet flat on the ground, she could not run or stand for long periods.

However, she could easily hang from branches and move about in the trees to feed, rest and escape predators.

3.5 million years old, the fossil has no associated lithic industriy. Some anthropologists consider this the direct ancestor of Homo habilis, because of its slender form.

The extant remains of the right lower limb of Lucy.

The presentation of a fragmented skeleton like this, a very difficult task, has been achieved in a masterly manner.

The bones have been beautifully arranged for display. This is a demonstration of the sometimes consummate art of the people who toil in the backrooms of museums around the world.

This photograph is taken from the rear of the display, and demonstrates the highly specialised and technologically sophisticated method of location and presentation of the parts of the skeleton. 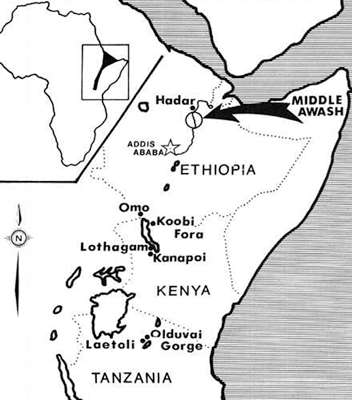 Map showing the region near Hadar in Ethiopia where Lucy was found. 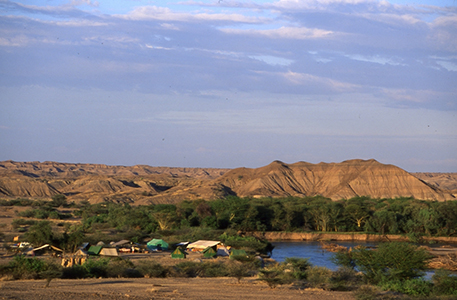 This camp was home for six weeks to students and archaeologists from Arizona State University.

There are tents for each person, a research tent, and a kitchen tent. 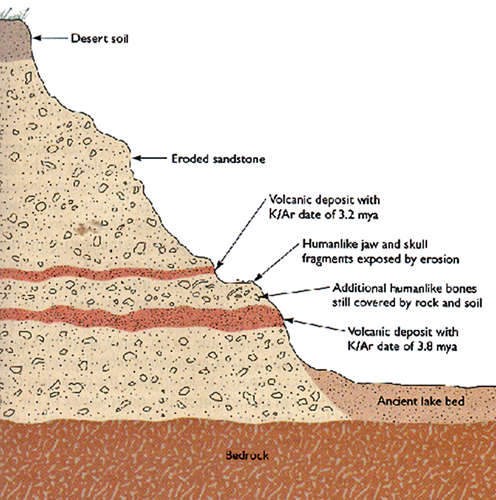 Profile of the sediments in which Lucy was found. 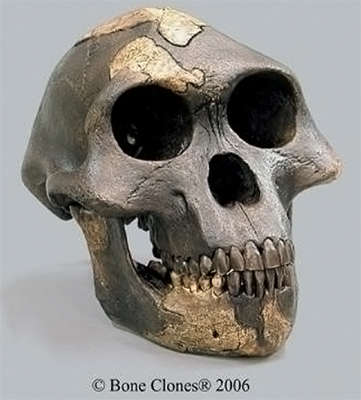 'Lucy' dates to 3.2 MYA. She was discovered in 1974 in Hadar, Ethiopia. She is generally believed to be the oldest discovered ancestor to modern Homo sapiens. 'Lucy' stood at only 3 ½ feet tall even though she was a mature Australopithecus afarensis.

Her jaw shows features of both apes and early hominids, the shape showing similarity to some apes, with large front teeth and parallel-sided tooth rows, and the size of the canines being intermediate between apes and later hominids.

The brain capacity was small, but the pelvis shape and size indicates bipedalism. This added to the evidence that bipedalism preceded an increase in brain size in ancient hominids.

This museum quality replica is cast from an exactingly-produced sculpture, based on photographs, descriptions and precise measurements of original fossils. 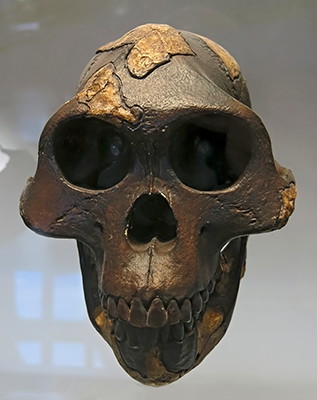 (note that this specimen is of Bones Clones® manufacture, as shown in the image above - Don )

Head shape was similar to a chimpanzee, with a parabolic dental arch, small canines, and a receding chin.

She had a small-framed body with barrel shaped ribcage, long arms and long curved fingers.

Lucy was bipedal, but equally agile in trees, which was a frequent habitat for her. 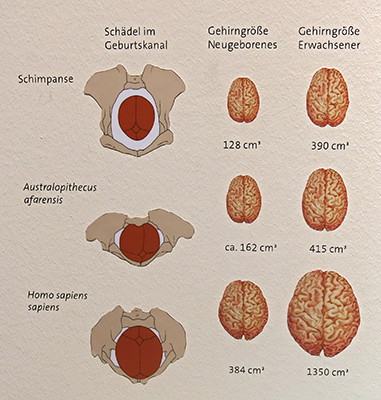 Relative brain sizes, and the amount of room in the birth canal for the heads of the chimpanzee, Australopithecus afarensis, and modern man. 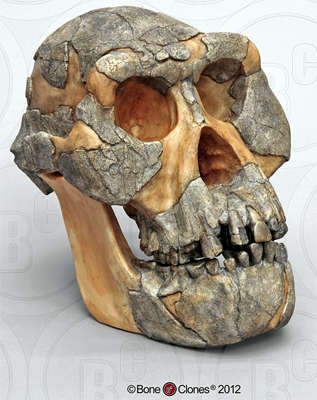 A.L. 444-2, in addition to being the largest Australopithecus afarensis skull found to date, was the first discovery of an associated cranium and mandible for this taxon. Its size and morphological aspects indicate that it is clearly a male, and heavy dental wear suggests advanced age. Holloway and Yuan (2004) estimate its cranial capacity at 550 ± 10ml.

Before the discovery of A.L. 444-2, the A. afarensis species was known only from fragments of various skulls and a subsequent composite reconstruction, the accuracy of which had been questioned. This long awaited find (nearly 18 years after Lucy's discovery) confirmed the essential features of the composite and played a significant role in addressing other key questions about this taxon.

In addition to underscoring the extensive sexual dimorphism present in A. afarensis, Kimbel et al. (1994, 2004) argue that the evident variability supports their argument for the taxonomic unity of the species. Further, they posit that in conjunction with the other finds from Hadar and Belohdelie, these fossils are evidence of a 900 000 period of evolutionary stasis for A. afarensis. 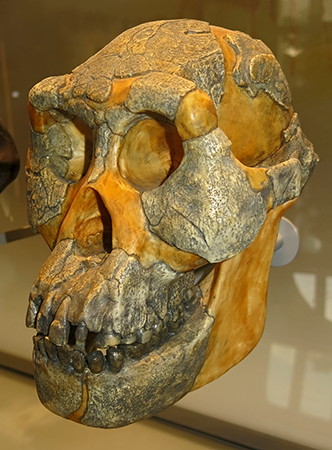 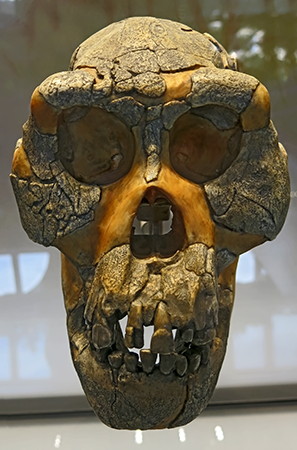 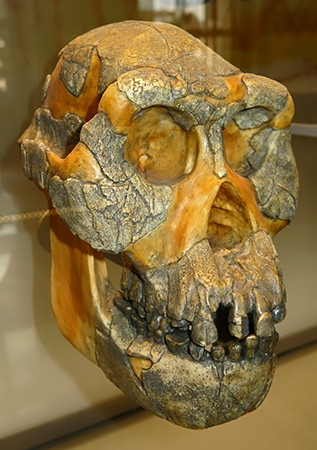 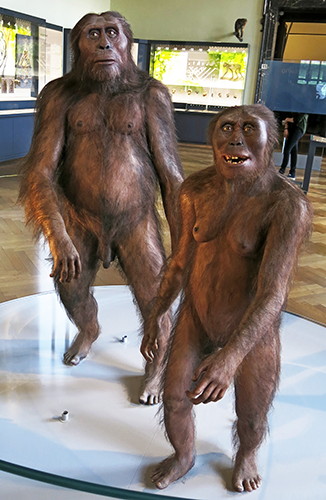 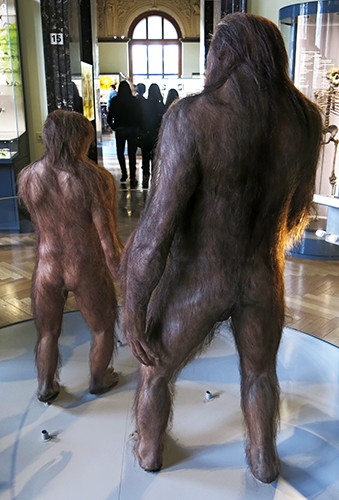 Closeups of the reconstructions above, and a view from the rear. 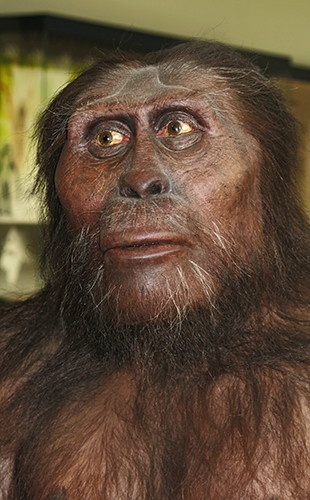 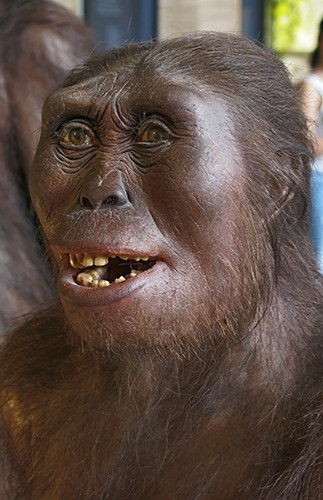 The level of detail in these sculptures is breathtaking. 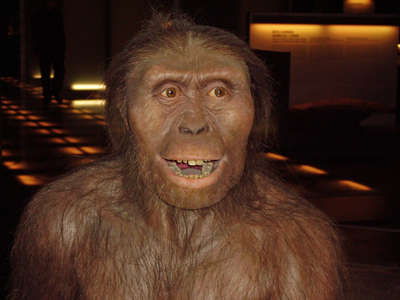 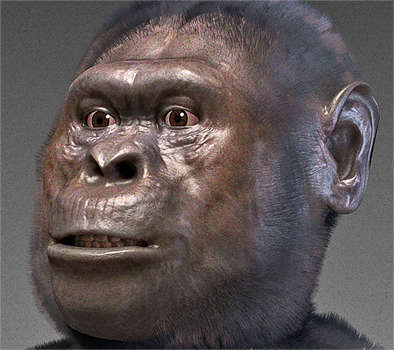 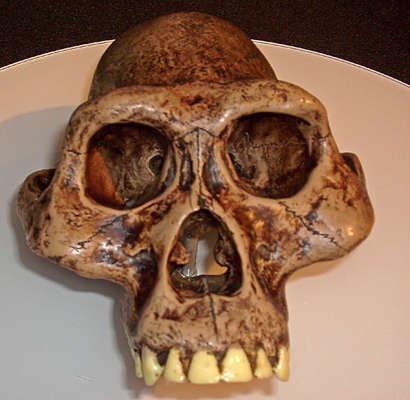 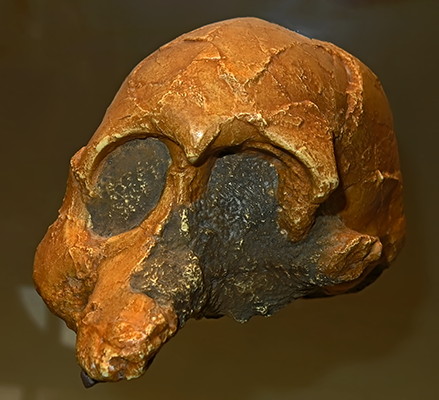 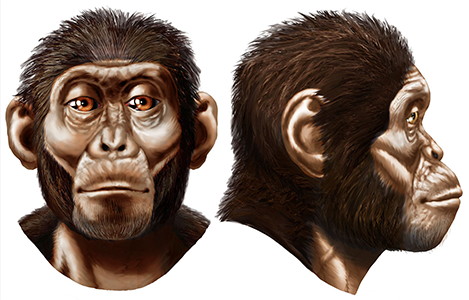 Digital recreation of the fossil. 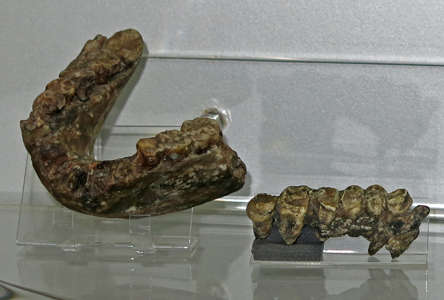 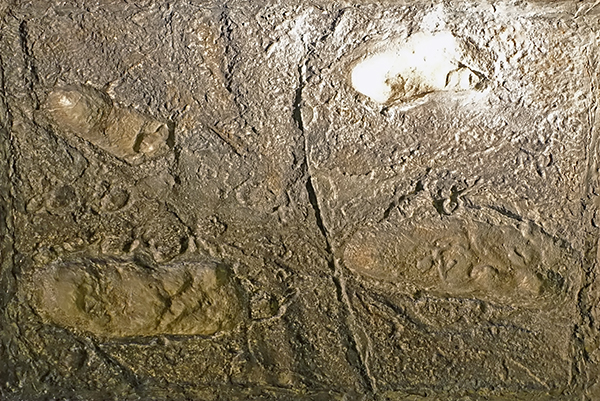 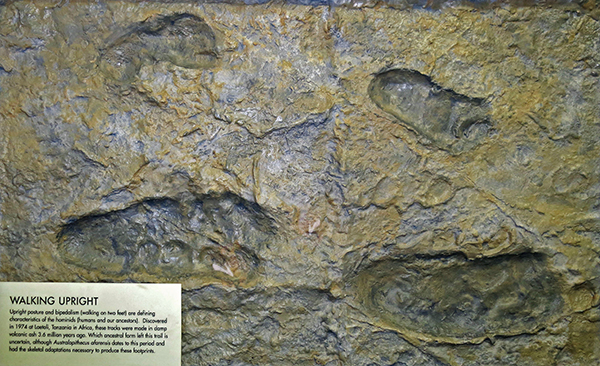 Upright posture and bipedalism (walking on two feet) are defining characteristics of the hominins (humans and our ancestors). Discovered in 1974 at Laetoli, Tanzania in Africa, these tracks were made in damp volcanic ash 3.6 million years ago.

Which ancestral form left this trail is uncertain, although Australopithecus afarensis dates to this period and had the skeletal adaptations necessary to produce these footprints.

More than three million years ago, three individuals walked across volcanic ash, two side by side, the third following behind. The footsteps they left reveal arched feet, with toes that are more human than ape-like. They must have walked upright, like us.

( note that the top photo overlaps the bottom photo. One pair of footprints is common to both images - Don )