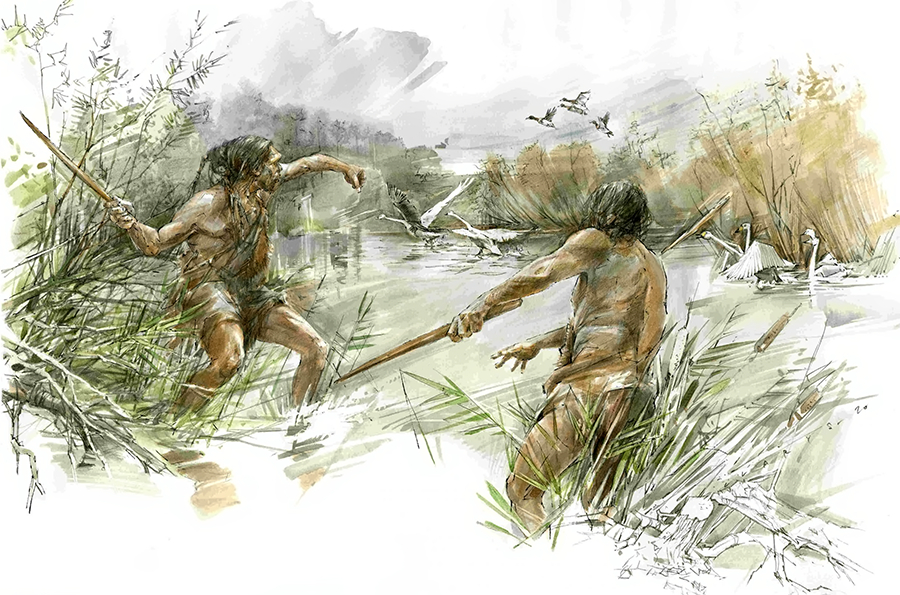 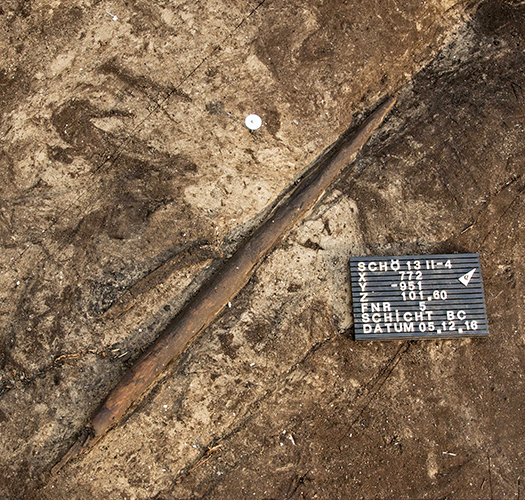 The throwing stick at the discovery site, Schöningen, Niedersachsen, Germany.

Ice age hunters were skilful, highly efficient and used an arsenal of different wooden weapons. This is shown by an approximately 300 000-year-old 'throwing stick' from the Schöningen open-air discovery site in Lower Saxony. Homo heidelbergensis probably used it to hunt waterfowl and to drive larger mammals while hunting. The study results were published in the journal Nature Ecology & Evolution.

300 000 years ago, hunters had used different high-quality weapons such as throwing sticks, javelins and thrust lances in combination, explains Professor Nicholas Conard. 'Only thanks to the fabulously good conservation conditions in water-saturated lakeside sediments in Schöningen can we document the evolution of hunting and the varied use of wooden tools.' 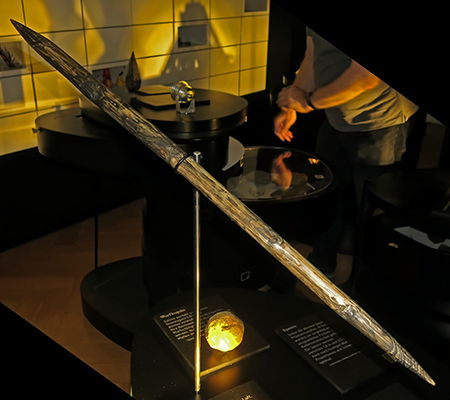 Throwing stick. These are designed to rotate in the air when thrown, and are used to bring down small animals.

Schöningen is famous for the Schöningen Spears, four ancient wooden spears found in an open cut lignite (brown coal) mine near the town. This environment helped preserve the wooden spears, which otherwise would have long ago rotted away. The spears are about 400 000 years old, making them the world's oldest human-made wooden artefacts, as well as the oldest weapons, ever found.

Three of them were probably manufactured as projectile weapons, because the weight and tapered point is at the front of the spear making it fly straight in flight, similar to the design of a modern javelin. The fourth spear is shorter, with points at both ends and is thought to be a thrusting spear or a throwing stick. They were found in combination with the remains of about 20 wild horses, whose bones contain numerous butchery marks, including one pelvis that still had a spear sticking out of it. This is considered proof that early humans were active hunters with specialised tool kits. 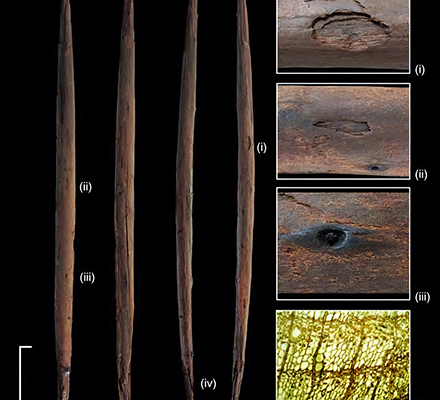 Throwing stick from the Schöningen 13 II-4 site with four views of the artifact and details.

The throwing stick comes from the found layer 13 II-4, from which very well preserved throwing spears, a thrusting lance and other wooden tools were unearthed in the 1990s. Like almost all of these finds, the new throwing stick is made of spruce wood. It is 645 mm long, has a maximum diameter of 29 mm in the middle and weighs 264 grams. It has an asymmetrical cross-section, with one side slightly curved and the other relatively flat.

From the signs of wear, it can be concluded how it was made and used - the branches were cut off and smoothed. Impact marks in the middle area resemble the damage to Australian mainland and Tasmanian throwing sticks, and for the first time provide clear evidence of the function of such a device. 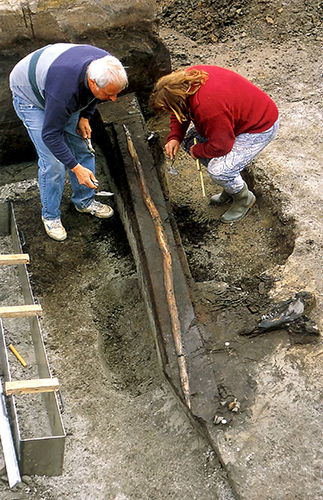 Photograph of one of the Schöningen spears when first found during the 1990s. It was initially proposed that these spears represented the earliest known simple projectile weapons found, since they were dated to 300 000 BP. This proposition places the timing of their emergence with the existence of Homo heidelbergensis.

(Note that the wooden spear has been deformed somewhat by the weight of sediments above it over hundreds of thousands of years. It would, presumably, have initially been straight, with any kinks in the original shaft being taken out by bending while passing it over a fire  - Don )

Recently, however, a number of studies have shown that these spears were most probably not used as projectile weapons. In one such study, the size of the tip of the spear was found to be too large to be thrown. The study found that if they had been projected, they could not have been thrown far enough to offer a significant hunting advantage.

( I find this difficult to believe. The pilum was a javelin used by the Roman army. It was generally about 2 metres, well over six feet in length overall, about the same as the spear shown here, and weighed anywhere from 2 to 5 kilograms, 4½ to 11 pounds. The spear shown here would have been lighter than the Roman pilum, which had a heavy iron tip and shank attached to a wooden shaft, and which had a maximum range of approximately 33 metres (100 ft), although the effective accurate range was more like 15–20 m (50–70 ft). This is certainly a good enough range for hunting animals, just as it was for bringing down opposing soldiers for the Roman army - Don ) 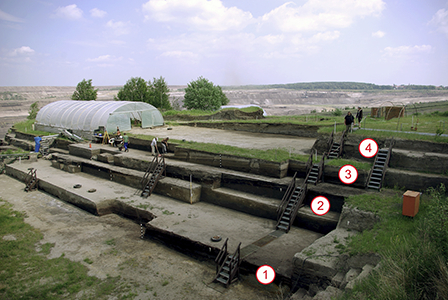 View of the ongoing excavations in 2014 showing the position of the four preserved sedimentary cycles from the palaeolake at Schöningen. Sedimentary cycle 5 was truncated by mining and is not visible in the picture. 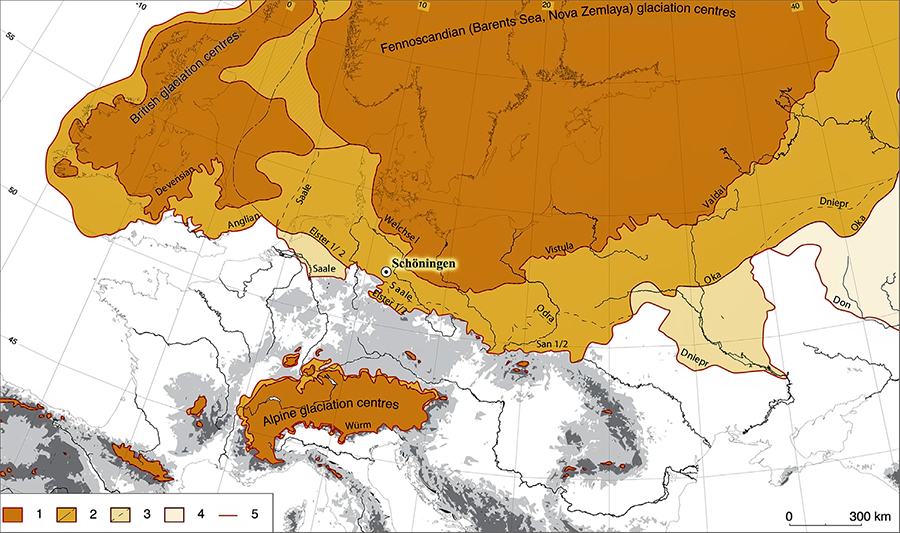 Schöningen. Position of the locality between the maximum southern expansion of the Elsterian and the Saalian and Weichselian continental glaciers. 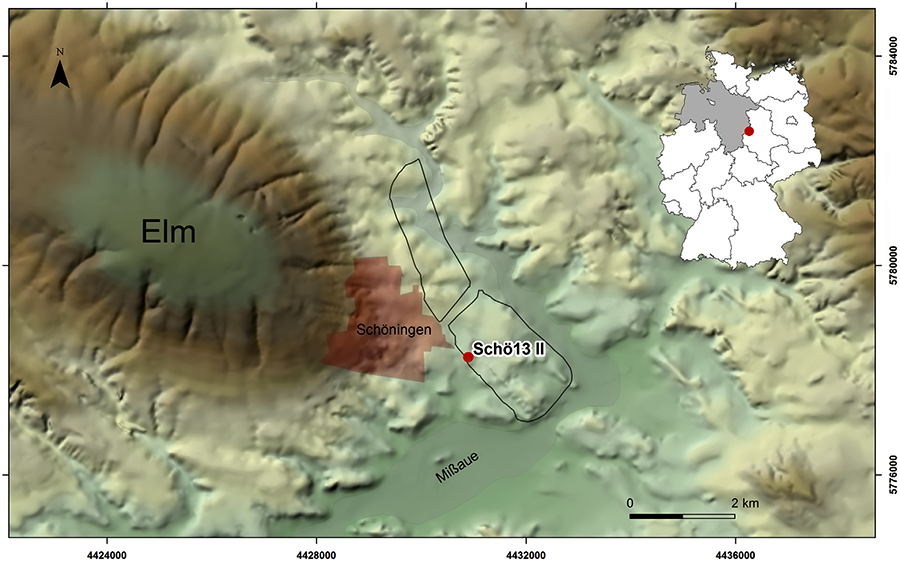 Topography around the town of Schöningen (rectilinear pink area).

To the west lies the ridge of the Elm Forest, to the east lies the open cut mine and the archaeological sites. The northern and southern mining pits are separated by the so called 'Damm', (barrier, embankment) which was excavated in 2008 and 2009 by the Tübingen team.

The red circle at Schö13 II indicates the position of the Horse Butchery Site. 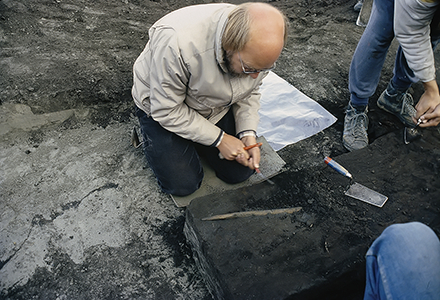 Discovery of the first throwing stick in 1994.

Hartmut Thieme excavating the 'throwing stick' in the autumn of 1994. This discovery was the first indication that Schöningen was to become a truly exceptional locality. 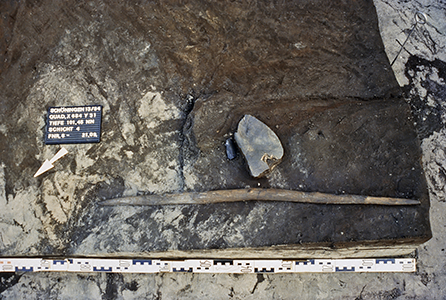 Discovery of the first throwing stick in 1994.

Completely excavated 'Throwing stick' carved from spruce wood at the time of discovery in the autumn of 1994; length 78 cm. The artefact lay at the interface of the calcareous marl and the peat-like organic horizon. 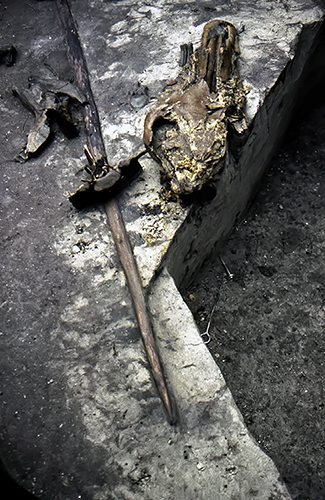 Spear II and horse bones at the interface of the calcareous marl and the peat-like organic horizon. The photo was taken when the new finds were presented on November 1, 1995. 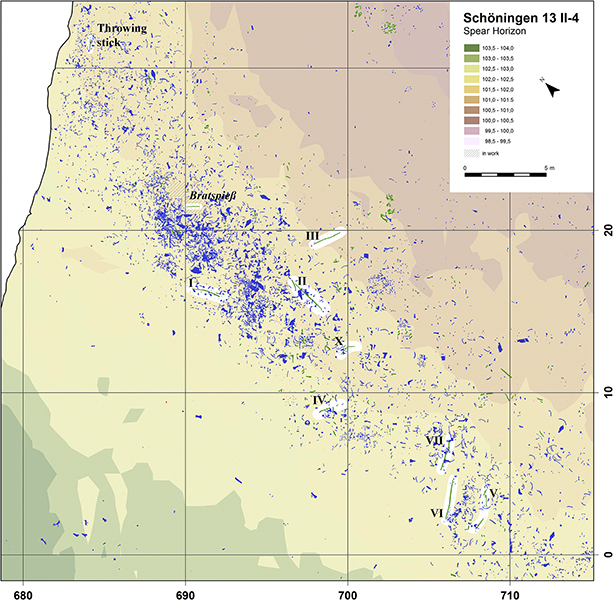 The 'throwing stick' from 1994, the Bratspieß, which is purported to be a burnt artefact, and spears I, II, III, IV, V, VI, VII, and X are indicated in the distribution. Each square depicted is 10 x 10 m. 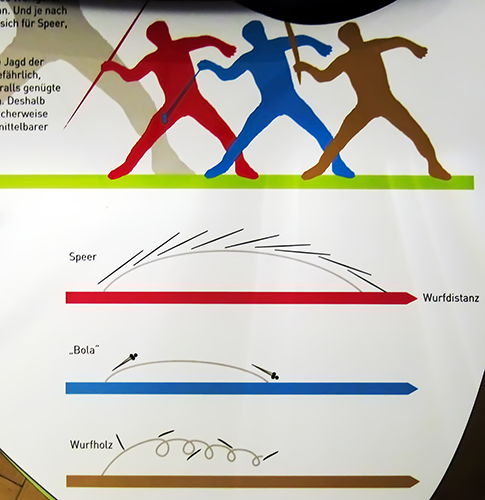 This diagram shows clearly the flight paths, and relative distances attained when thrown, for the spear, bola, and throwing stick.