The Bust, one of the Grimaldi Venuses

The carving known as the Bust was done on a dark soft stone known as dark-green chlorite and consists only of a head and upper torso. Because of the lack of details surrounding its exact excavation, scholars are unsure as to whether this small – measuring only 29.2 mm – figurine is from Grotte du Prince or Barma Grande. The head is circular and, although the eyes and nose are carved, the mouth exists only in a colour variation in the stone that creates the false impression of a horizontal incision where the mouth should be. The right breast has been broken but the surviving breast is oval and a notch between the breasts makes it appear pendulous with the nipple pointed downward. 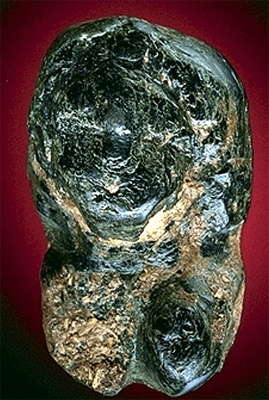 Made of blackish chlorite with tints of green, the piece is 29 millimetres high, and is 25 000 years old. 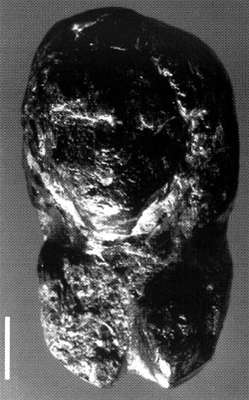 (Text below translated and adapted from White et Bisson 1998)

The 'Bust' is the only carving in the collection which was rediscovered in Montreal already known to the scientific world. In 1928, a few photographs and sketches made by the Abbé Dupaigne were published by H. Breuil. He attributed it to the collections at the Grotte du Prince and it was understood until today (Mussi 1991), that its discovery was made by L.-A. Jullien. We now know that this is not correct. A label affixed to the piece, written in the hand of L.-A. Jullien, says 'Barma Grande, Cavilieri, Menton.' Cavilieri was a little known collector except for the fact that he searched the cave of Barma Grande at about the same time as Jullien.

The label suggests that the 'Bust' was discovered by Cavilieri, and later acquired by Jullien. Some indices lend particularly strong credence to this interpretation. The University of McGill in Montreal has more than 900 objects (lithic industry and fauna) attributed to Upper Paleolithic from Barma Grande cave and la Grotte du Prince (acquisition from L.-A. Jullien in 1896 and in 1926 H. Ami ). An analysis by eye of the sediment still present on these objects allows us to assign the 'Bust' to the cave of Barma Grande. Indeed, the grey sand still partially covering the piece is not visible on the objects in the Grotte du Prince but is found on 36% of archaeological material from Barma Grande.

This sculpture represents the head and upper torso of a female (Fig. 2). The right breast has disappeared and this break probably dates from the Paleolithic period. It is made of the same material as the first 'Woman with a perforated neck" kept at Harvard. It is made of a dark green chlorite (Munsell value = 5G 3 / 2 to 5BG 3 / 2 (dusky green to dusky blue green, rgb 61, 76, 71 to 58, 78, 87 )). It measures 29.2 mm in height and has a maximum thickness of 9 mm and a weight of 8.07 g. The drawings that H. Breuil made from the photograph of Abbé Dupaigne (Mussi 1991; Delporte 1993b) give the impression that the object is broken under the breast, but in truth it is now complete with the exception of the right breast and small accidents at the top of the upper limbs. These breaks are certainly due to a weakening of the surface areas along the natural cleavage of the raw material. Chlorite is often soft and this piece was certainly very brittle when it was first discovered.

The end of the left breast shows a thin abrasion and does not carry any trace of sediment, while it is found in most of the depressions in a consolidated state as what seemed at first like a layer of lacquer. Following careful examination by binocular microscope the solidification of the sediment appears to be the result of natural processes and not a chemical treatment by Jullien. Mcroscopic traces of red ochre were also found 'trapped' under the grey sand at the bottom of incisions present on the surface. the friable status of certain sectors does not allow us to determine the degree of original abrasion. However, the smoothness of the lower torso suggests that at one time the surface was finely abraded.

The head of this statue is circular, the face is highlighted on a flat field (a very common among the statuettes of Grimaldi) and is bounded by a narrow incision, when viewed in profile, it is slightly convex.

The upper part is distinct, and the chin line and the square chin are sculpted with care. Perhaps he had other facial features carved that have disappeared over time. His eyes represented by two horizontal incisions of 3 mm. If the nose there, it is still more than the share ie high between the eyes.

Unlike the face of the 'Woman with a perforated neck', the face of 'Bust' does not have an incised mouth. In its place is a natural clearer area in the chlorite. The arms are not represented. The intact breast is, from the front, a pointed oval, and in profile, slightly flattened. A notch between the breasts makes them appear prominent. This figurine has a flat back marked by rather irregular grooves with a U shaped profile. They are oriented more or less vertically to the axis of the piece, but the label affixed by Jullien partially covers them.


(Text above translated and adapted from White et Bisson 1998)