Back to Dolni Vestonice main page

Dolni Vestonice and the Three Sisters - photographs of the area

180 degree panorama from the highest peak of Pavlov/Pálava, - Devin/Děvín, looking to the north.

Here we can see the whole of Table Mountain, Pálava between Děvín and Mikulov. To the right are the Sirotčí castle ruins.

View of the Three Sisters from the south looking north.
Photo: Per 1998

View of the Three Sisters from almost inside the village of Dolni Vestonice, from the north looking south.
Photo: Per 1998 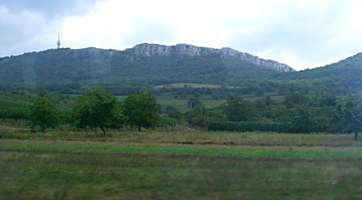 We had only one day to make the entire journey there and back from Vienna. It was not easy, but we made it. Few people speak anything but Czech. We are both English speakers, Maria has fluent German, I have schoolboy French, but they were of little use.

Katzman, whose Aggsbach's Paleolithic Blog is well worth visiting for those interested in first quality Palaeolithic stone tools, writes:

When Masaryk founded Czechoslovakia 1918 it was clear for him, that this would be a multicultural country with Czech and Slovac inhabitants, but also German and Hungarian and Croatian minorities. He explained during the peace treaty that it would be like a second Switzerland. In fact the German speaking population with about 3,5 million people was much bigger than the Slovac population (<2 million). So there were German schools and names and shops and of course Unterwisternitz kept its name until 1945. 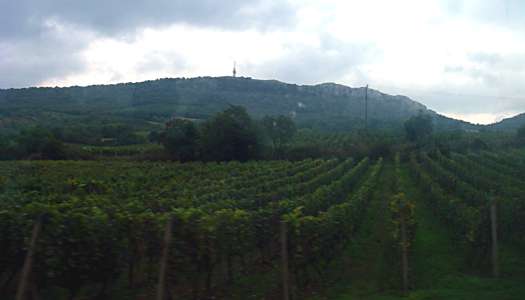 The hills are made up of Jurassic limestone deposits which contain beautiful white fossil shells, which were used by the inhabitants for personal decoration, often combined with Arctic Fox teeth from animals hunted in the area.

The soils are ideal for vineyards, as can be seen in this shot. 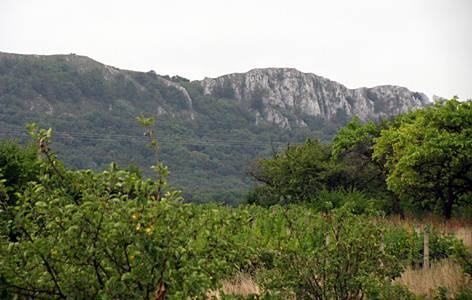 These steep slopes proved ideal for the former inhabitants of the area to drive larger animals such as horses and mammoths up the blind valleys to the base of the cliffs, where they were more easily killed. 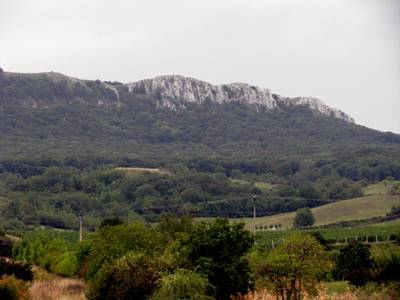 The cliffs are made of Jurassic limestone. It is no accident that the area is such an important one for the discovery of tools and skeletons. A soil based on limestone is far more likely to keep bones and tusks and antlers in good condition than a more acid based soil. 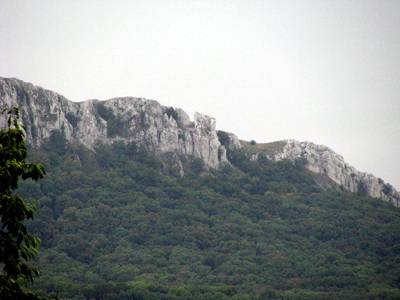 If the body of a person or animal is covered by soil where the underlying rocks are quartz, granite, gneiss, mica schist, sandstone, shale or slate, the soil above or derived from them is usually acid. Their skeleton will disappear almost entirely within a hundred years or so.

In limestone soils, the skeleton can last for tens or even hundreds of thousands of years, especially if the soils are dry.

The soils here are ideally suited for agriculture, and viticulture in particular. Dolni Vestonice or Unterwisternitz as it was formerly known is an important wine making area. 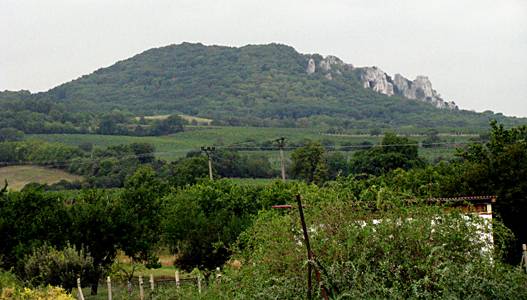 The area also supports small home orchards of fruit trees as well. Fruit brandy, or Slivovitz (Czech: Slivovice) is made from the plums and apricots grown in the region, as is the case in many similar places in Europe. 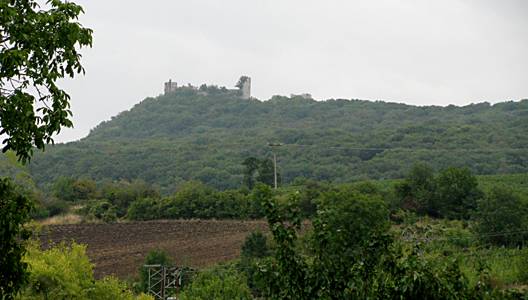 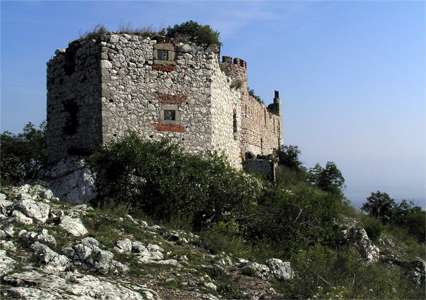 The Palava Hills or Pavlov Hills, or just Palava with its limestone rocks, oak groves, ruins of medieval castles and unique architecture of the historical town of Mikulov are among the best known and frequently visited places in the Czech Republic. The area is also well known for its wine.

These limestone walls are not very high, the highest point, Devin, is only 554 meters above sea level, but the walls are very visible as their white rocks rise out of an otherwise fairly flat landscape. The elevation at the water reservoir on the river Dyje is only 160 m a.s. The altitudinal difference between the river and the top of Devin is 389 m.

Palava is the warmest and one of the driest parts of the Czech Republic, many plant species that could not grow anywhere else in the Czech Republic occur here. Folk etymology translates the name Palava as "earth burnt by the sun" after the dry and warm climate throughout the region.

The Palava Protected Landscape Area was established in 1976 on 83 km2. In 1986 it was listed on UNESCO biosphere reserve.

The Ruin of the castle Dívčí hrad

The remains of the once significant and stout castle called Devicky or Divci hrad, Maidberk (Maidenburg) are located westward of the village Pavlov, on a rock pinnacle about 1 kilometre from the highest peak of Palava - Devin.

The ruins nowadays consist of an irregular rectangle, 65 metres long and 20 metres wide closed by a stout fortification wall. They are still the dominant feature of the surrounding hills. The destruction of the castle came with Swedish soldiers in 1645 after the triumphal battle in Jenkov. The Swedes burnt and plundered the castle. 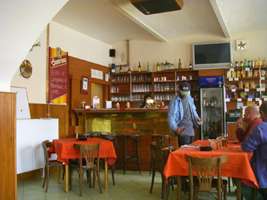 Dolni Vestonice Pub - a "must visit" while in Dolni Vestonice village, just near the Museum. No one speaks anything but Czech, but ordinary sign language works well enough. The local beer is excellent. 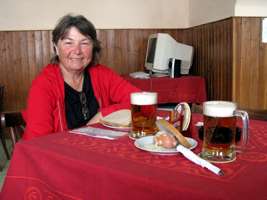 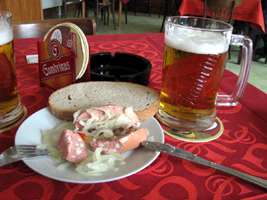 However, the meal you get depends upon luck, pretty much, unless you speak Czech. We pointed to something on the menu, and the waitress tried to tell us what it was in Czech, which didn't work. We tried English, French and German, but to no avail. 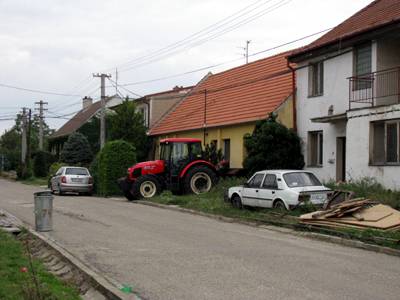 A back street in Dolni Vestonice.

It is a place of contrasts. Here we see a derelict car in the front yard of one of the houses, a car apparently in good condition, and a new tractor presumably used in the vineyards which are an important economic gain for the area, and a source of income and presumably foreign exchange. 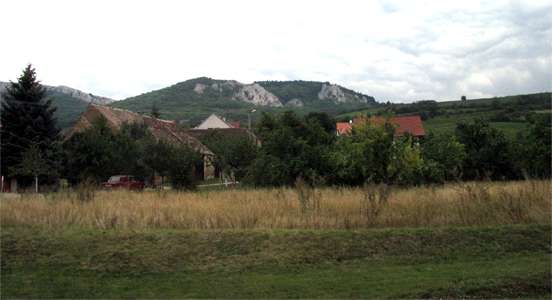 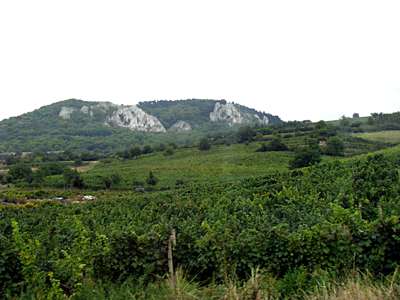 The gentle rolling fields with a limestone base, and a generally warmer climate than much of the Czech Republic, allows the development of important and well cared for vineyards, which produce excellent quality wine. 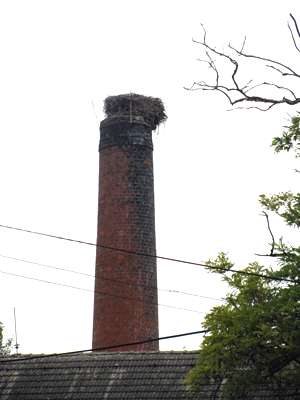 A Stork nest on an abandoned chimney. 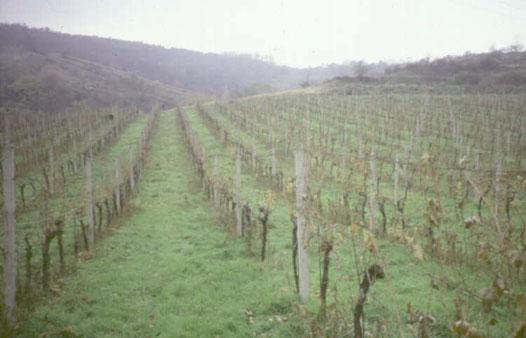 The Dolni Vestonice III Gravettian site lies on the eastern slope of the short blind valley (slope dell) between the sites I and II. The site was first observed by B.Klima at the end of 1960s and has been under excavation since the summer of 1993 by Petr Skrdla. Excavations yielded a collection of more then 500 pieces of stone artifacts (majority of which are made of silica from glacigene sediments), bone fragments, and decorative objects. The site consists of two different units (unit 1 and 2). Unit 2 is composed of two layers. Excavations will be continued.

Back to Dolni Vestonice main page