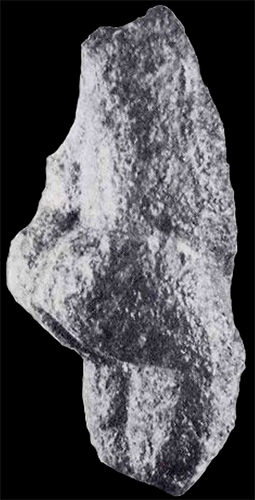 This statuette discovered at the foot of the rock escarpment of Enval in 1970 is one of the smallest known palaeolithic figurines, being 31 mm high, with a width of 15 mm and a thickness of 14 mm. It was made of soft sandstone more than 13 000 years ago.

The anterior face, worn, appears very damaged: one can only distinguish a horizontal groove, quite flared, which may be the base of the breasts, which must then be strongly pendant, unless It marks the lower limit of the forearms placed on the abdomen, or the base of a voluminous belly.

The posterior aspect presents sharper anatomical details: a projection of the gluteals, marks indicating the spine, short legs under the crease of the knee, and a very pronounced arch of the small of the back.

Its profile is perfectly characteristic of the sculptures and stylised engravings of the Upper Magdalenian. It can be compared to the engraved figure of the cave of the Rond du Barry, in Polignac in the Haute-Loire.

This representation, interpreted as a Venus, testifies to the artistic and spiritual concerns of the people who occupied the area at the end of the Palaeolithic. It is also part of a wider range of comparable productions from the Rhine valley to the Allier.

Text above translated from http://crdp.ac-clermont.fr/crdp/Ressources/DossierPeda/Bargoin/collections/venus/histoire_art.htm 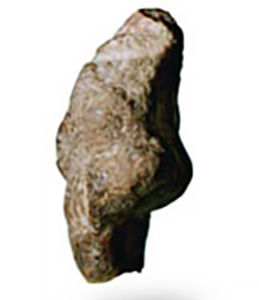 A small colour photograph of the venus. 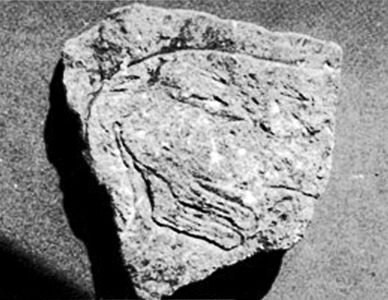 Engraving in stone of the hindquarters of a large cat, found at the site.