Located on the western escarpment of Mount Carmel, Kebara Cave has two important components, Middle Paleolithic Aurignacian and Mousterian, and Epi-Paleolithic Natufian. First occupied about 60 000 years ago, the 4 metre thick cave deposit has Levallois stone artifacts, many many hearths, and midden deposits.

The oldest occupations at Kebara Cave are thought to be associated with the Middle Paleolithic Aurignacian and Mousterian traditions, and range between 60 000 and 48 000 years ago. These oldest levels yielded thousands of animal bones - primarily mountain gazelle and Persian fallow deer - many of the bones with cutmarks, as well as burned bones, hearths, ash lenses and lithic artefacts leading researchers to believe Kebara Cave was a long-term occupied base camp for its Neanderthal residents. Also identified in the MP layers of Kebara cave was a nearly complete skeleton of a Neanderthal, known as KMH 2 or Kebara 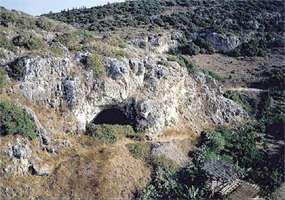 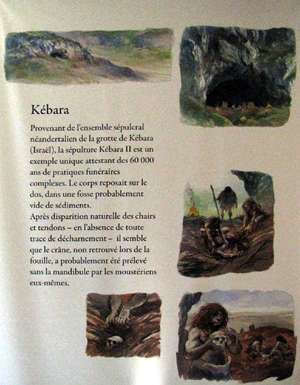 The Kebara II burial in the Kebara Cave, Israel, is a unique example of complex burial practices 60 000 years ago.

The body rested on its back, probably in a grave dug for its interment. After the disappearance of flesh and tendons - without any trace of physical removal of flesh - it appears that although the jaw remains, the skull, not found during the excavation, was probably removed by the Mousterians themselves. 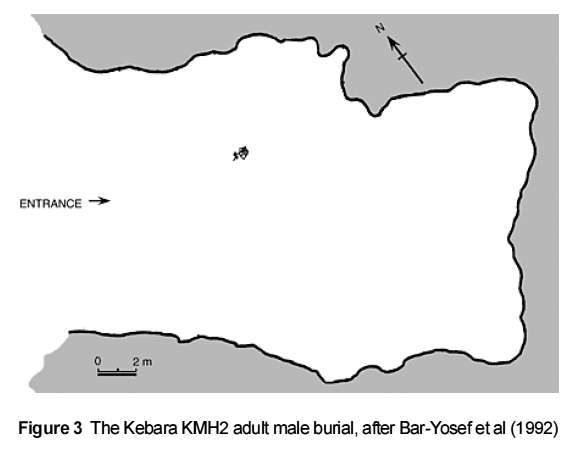 Kebara 2 skeleton position in the cave.


Mugharet el-Kebara (Me'arat Kabara) is located on the western escarpment of Mt. Carmel, about 13 km south of Wadi el-Mughara (Nahal Ha-Me'arot) at about 60-65 m above sea level. Its arched entrance, which was essentially the same during Middle Paleolithic and early Upper Paleolithic times, faces north-northwest. The small terrace in front of the cave is formed by a huge rock collapse at least part of which occurred during the Upper Paleohthic. The escarpment at Kebara is made of limestone of Cenomanian and Turonian age. The cave itself is formed within dolomite. (Bar-Yosef et al, 1992) 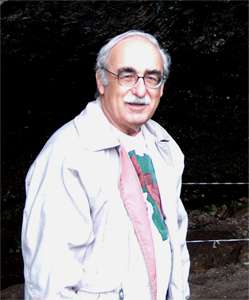 Ofer Bar-Yosef, born 1937, is a highly experienced and respected Israeli archaeologist, who specialises in the Paleolithic period. He is most closely associated with excavations at prehistoric Levantine sites including Kebara Cave in Israel, the early Neolithic village of Netiv HaGdud in the West Bank and other Palaeolithic and Neolithic sites in China and the Republic of Georgia.

Among his most recent discoveries were microscopic flax fibres, found while examining clay samples from a cave in the Caucasus Mountains of Georgia (which he has visited every year since 1996). At 34 000 years old they are the earliest artefacts of their kind ever discovered.

Photo: Wikipedia, Z. Matskevich - I, the copyright holder of this work, hereby release it into the public domain. This applies worldwide. 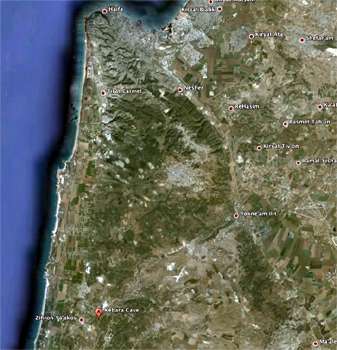 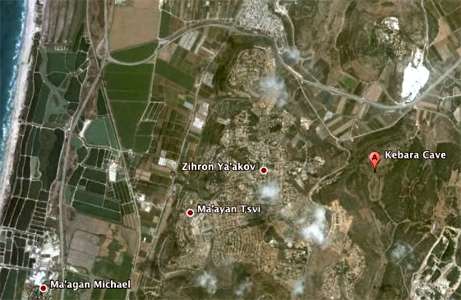 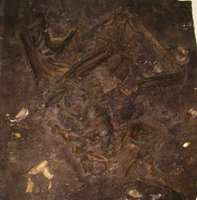 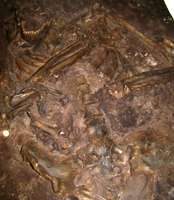 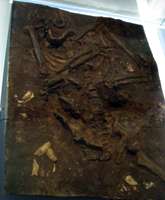 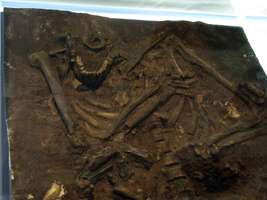 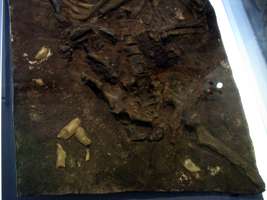 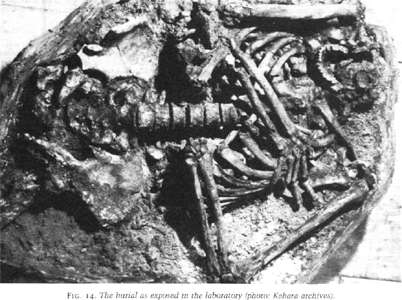 The original Kebara skeleton photographed after removal to the laboratory.

The sediments inside the pit were yellow-brown while those outside were blackish.

The skeleton was lying on its back in a general east-west orientation. The right hand lay on the thoracic cavity at the level of the left scapula.

The left hand lay a little lower at the level of the lumbar vertebrae. The cranium was missing. The cervical vertebrae were in anatomical sequence, with the atlas positioned between the branches of the mandible. The latter was tilted toward the vertebral column, indicating that the head of the skeleton originally leaned forward. The head lay at a slightly higher level than the rest of the body against the steep northeastern side of the burial pit. In its primary position the head was probably facing westward.

The right humerus was turned inward with its lateral side facing up. The right innominate (hip bone) was in place, and the typical sideward collapse after the decay of the flesh had not occurred. These observations mean that the right side of the body was leaning against the northern wall of the burial pit, limiting the amount of bone movement. which normally occurs with the decomposition of the soft tissue.

Most of the anatomical connections were still intact; for example, the extremely mobile hyoid bone remained in place between the branches of the mandible. There was no evidence for the collapse of the thoracic cavity after decomposition of the soft tissue. The position of the components of the scapular girdle and the obliquity of the left clavicle indicate that the shoulders were contracted slightly upwards. These observations suggest that the body decomposed in a filled grave and that the burial pit was somewhat deeper at the level of the thorax.

Despite the abundance of evidence for hyena-gnawed bones in the cave, no carnivore marks were noticed on these bones.

The positions of the mandible, the hyoid bone, and the right upper third molar, which fell from its socket next to the right lower third molar, exclude the hypothesis that the skull was removed by an animal. Furthermore, no cranial fragments were found. These observations suggest that the skull was removed by humans following the complete decay of the atlanto-occipital ligaments.

This is, in our view, the first clear-cut case recorded in a Mousterian context for later human intervention in a primary burial. The absence of the skull precludes any further interpretations in terms of mortuary practices.

Numerous lithics and a few bones were discovered within the burial pit. Their distribution, however, would not indicate any explanation other than that they were a part of the refill of the pit, which was dug into layers rich in artefacts and bones. The use of the same sediment would also mean that no major colour changes resulted from the refilling of the burial pit.

Judging by the degree of ossification, the morphological changes at the costo-endochondral joint, dental attrition, and pelvic morphology, KMH 2 was an adult male 25-35 years old.

Its excellent state of preservation provides accurate information on postcranial elements such as the vertebral column, thorax, upper limb bones, and pelvis. The study of these bones has direct implications for the interpretation of the morphology of Levantine Middle Paleolithic humans. Comparisons with the Neanderthals from Tabun, Shanidar, and Amud or with the early modern humans from Skhul and Qafzeh are most informative.

The estimation of the stature of KMH 2 at ±1.74 m, for example, is consistent with observations previously made on Near Eastern Middle Palaeolithic hominids suggesting a mean stature greater than that of European Neanderthals.

The KMH 2 mandible displays a combination of gracile and robust features. Several measurements exceed those in modern humans as well as those in other Middle Palaeolithic hominids. The corpus is extremely robust and tall, especially in the symphyseal region, which lacks a chin. 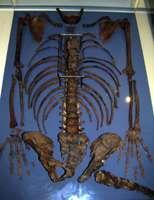 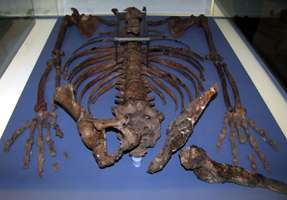 Note that the one femur found has been placed at an angle to fit into the display case. 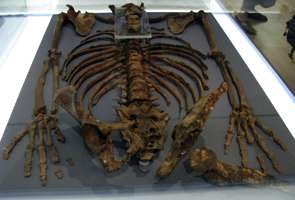 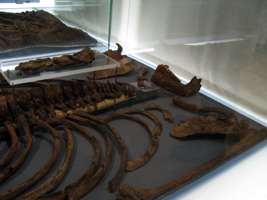 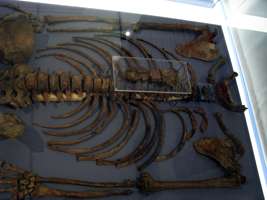 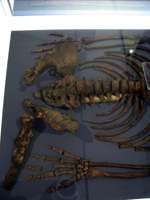 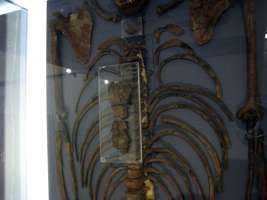 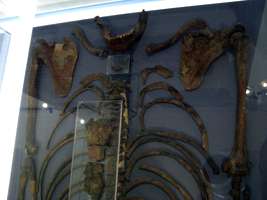 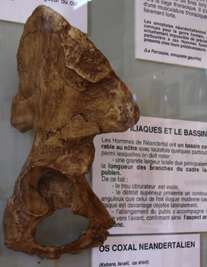 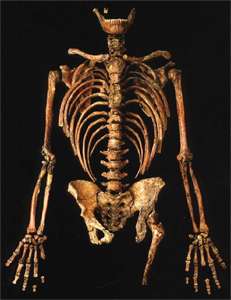 Another version of the Kebara 2 skeleton. 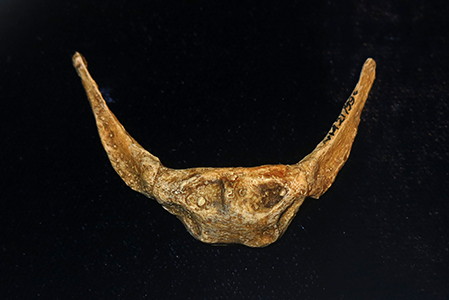 The original is in the Rockefeller Museum, Jerusalem. 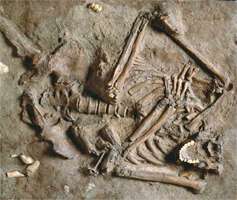