In 1914 stone quarry workers in Bonn-Oberkassel discovered two human skeletons, bones from a dog, and two works of art made of bones and antlers. The combination of a double burial for humans and art and one of the oldest domestic dogs in the world, unique in Central Europe of around 14 000 years ago, makes this ensemble of findings one of the most important sources for the late Ice Age.

A subsequent excavation by the LVR-Amt für Bodendenkmalpflege im Rheinland (Rhineland Authority for Archaeological Monuments and Situes) led by Ralf W. Schmitz and Jürgen Thissen in 1994, yielded a more precise localisation of the site of the findings and a more recent dating than had been previously assumed. There are plans to subject the Oberkassel grave findings to a completely new scientific examination. Currently, 30 scientists from extremely diverse fields are participating in this multidisciplinary project. 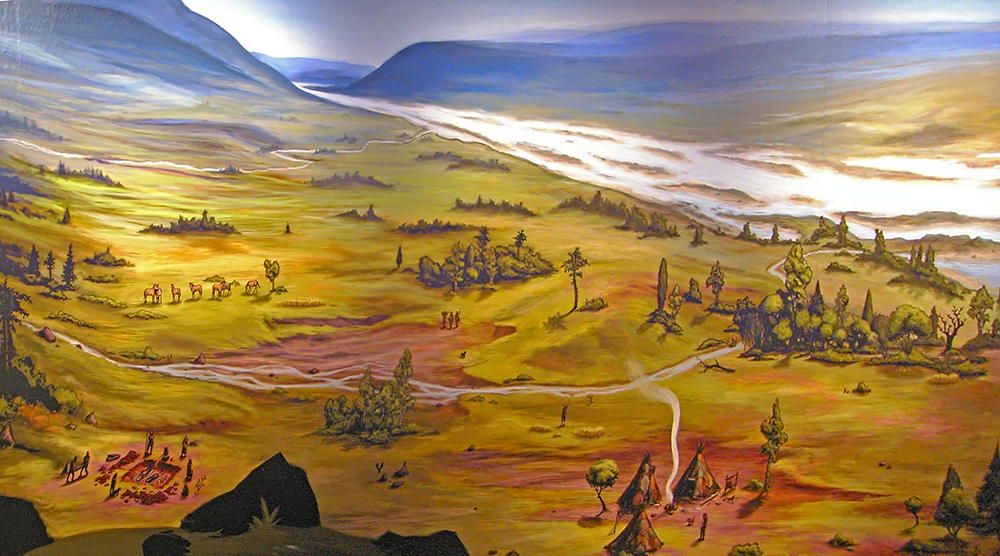 The habitat of the 'people from Upper Kassel': the Rhine Valley 14 000 years ago graphically reconstructed. 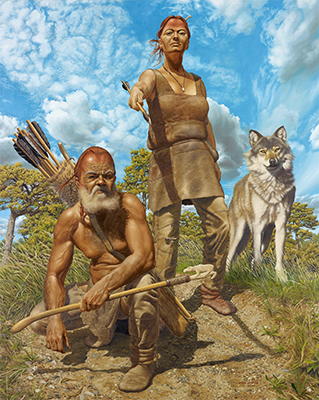 Ice Age hunters with a dog - our direct ancestors?

In 1914, the double burial of a man and a woman was found in the quarry on the Oberkasseler Rabenlay, where a dog and art objects made of bones had been put into the grave. This double grave is the only one of its kind in Central Europe and the most significant find of the late Palaeolithic in Germany. Artist: © Karol Schauer
Source and text: http://www.bodendenkmalpflege.lvr.de/de/aktuelles/veranstaltungen/eiszeitjaeger.html#!prettyPhoto
Additional text: Display, LVR-LandesMuseum Bonn, for the exhibition 'Eiszeitjäger – Leben im Paradies?' (23.10.2014-28.06.2015) 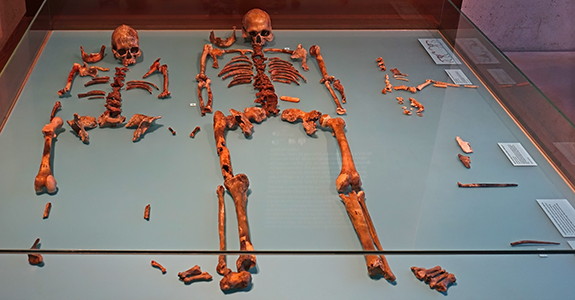 Female skeleton on the left, male skeleton in the middle, bones of the dog on the right, Canis lupus familiaris. 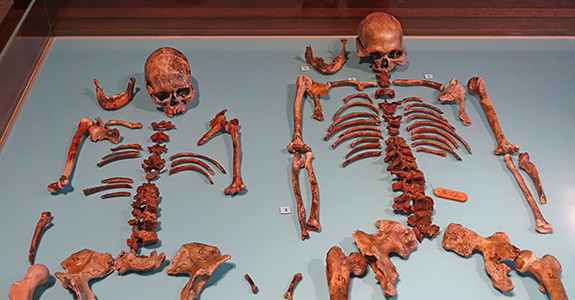 Close up of the upper parts of the human skeletons. 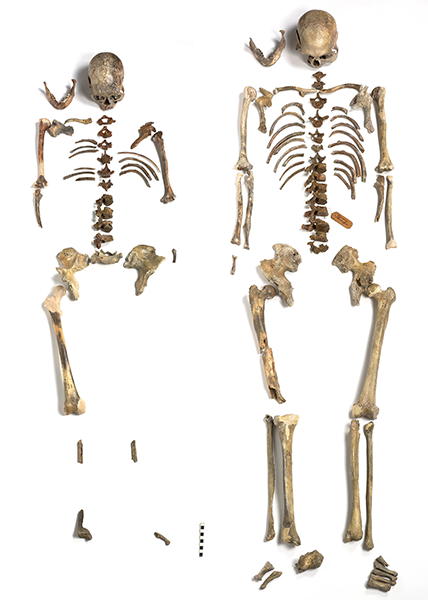 The two human skeletons from above.

Using methods of forensic medicine the two skulls from Oberkassel were given faces. 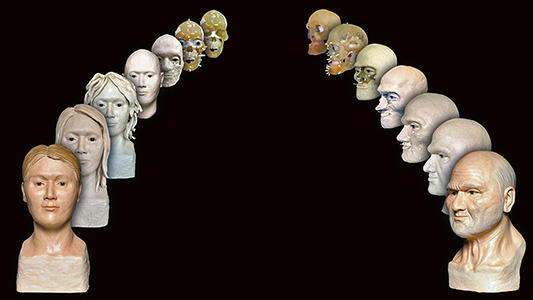 Creation of the models. 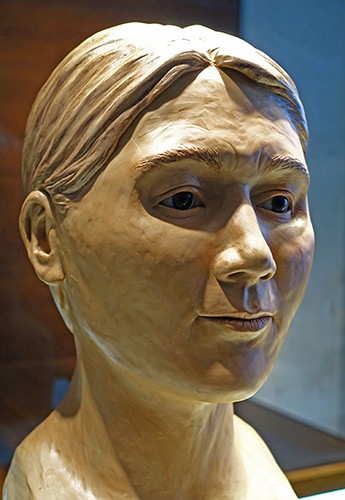 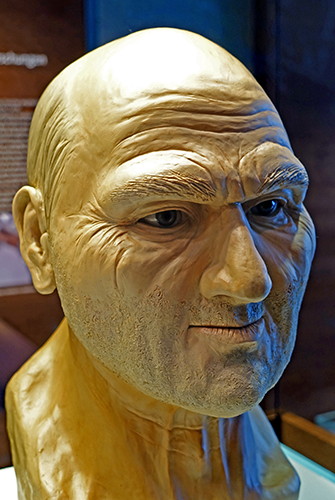 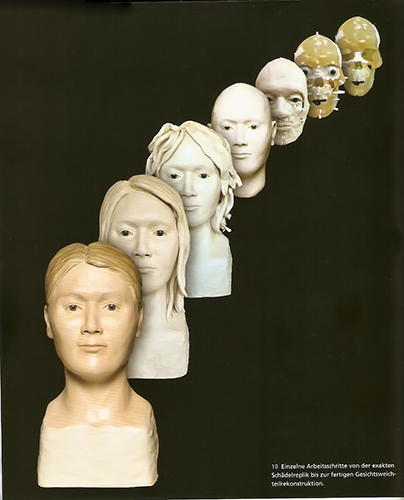 Individual steps from the exact replica of the skull to the final molded facial reconstruction.

The white rubber markers that indicate the thickness of the soft tissue are visible as white cylinders, in particular on the second image from the top. The soft tissue is made of modelling clay.

There were a number of artefacts included in the burial, including this penile bone of a brown bear with haematite (a pure form of red ochre) superimposed on cut marks.

Hairpin. Length 190 mm, 12 mm wide, and 7 mm thick, polished by frequent use of its owner. The pin was manufactured from a long, hollow bone, the head still shows residues of the spongiosa.

The rectangular cross-section has rounded edges along the length. Along the length are chevron-shaped pairs of marks, arranged in an orderly fashion in a sequence. One side has the tip of the chevron pointing to the head, the back side has them pointing in the opposite direction. The lower part of the stick shows scars and fine diagonal hatching indicating a short period of use for a different purpose, probably to retouch flint surfaces.

The fact that the pin was found near the skull of the woman gave rise to the interpretation as a hairpin, the frequent use of it resulted in the durable polish. 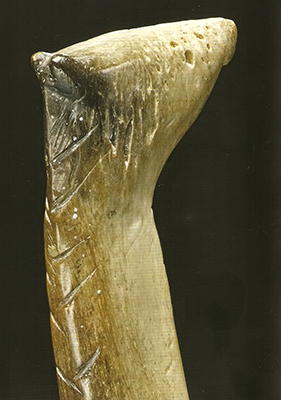 Details of the head of the 'hairpin'. The chevrons are oriented tip-down on the back and tip-up on the front. The head shows an elongated snout over a short lower jaw. The ears are round (probably shaped by frequent use) and short. The chevrons on the neck resemble a mane.

The head is carved from spongiform bone and shows a very durable polish. The head is interpreted as that of a horse or a marten, while the triangular shape could also indicate the head of an elk or a deer.

The animal figure was originally nearly complete. However, a quarter of it was lost during its recovery from the site in 1914 by quarry workers. Nevertheless it was clearly identified as an animal sculpture.

The diagonal carvings appear to indicate hide with diverse long and dense hair. All characteristics point to a member of the class of cervides, most probably an elk as a contour découpé, a flat sculpture worked on both sides, a characteristic style of the Magdalenien IV (Southern France chronology). Recent absolute dating, however, attributes the site to the late ice age 'feather-knife' group, ~14 000 BP.

The Federmesser culture or Federmesser group is a toolmaking tradition of the late Upper Palaeolithic era, of the Northern European Plain from Poland (where the culture is called Tarnowian and Witowian) to northern France and Britain, dating to between 14 000 and 12 800 years ago. It is closely related to the Tjongerian culture, as both have been suggested as being part of the more generalised Azilian culture. It used small backed flint blades, from which its name derives (Federmesser is German for 'feather knife', or pen knife), and shares characteristics with the Creswellian culture in Britain.

A recreation of the elk (moose) sculpture. 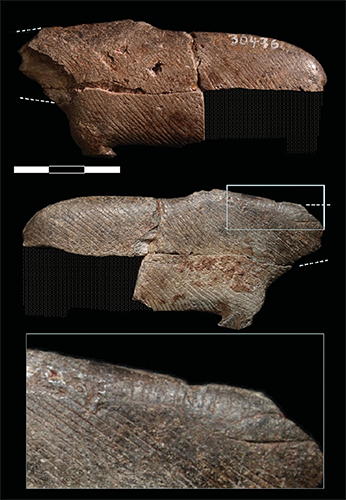 The front and back of the piece display engraved hatching and the detail of the mane shows short engraved bars perpendicular to the edge. 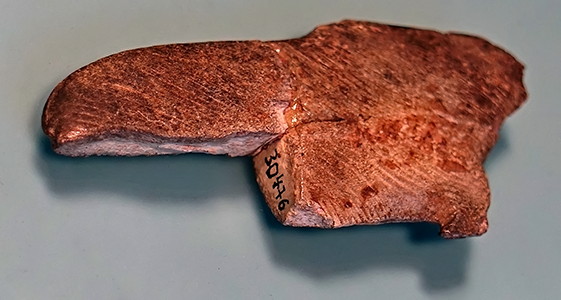 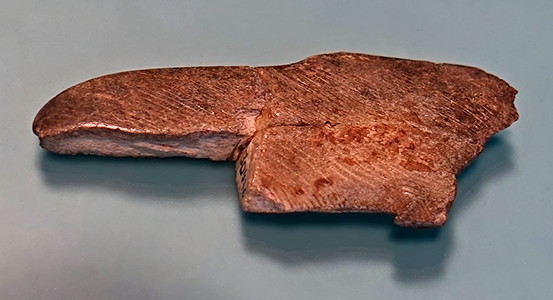 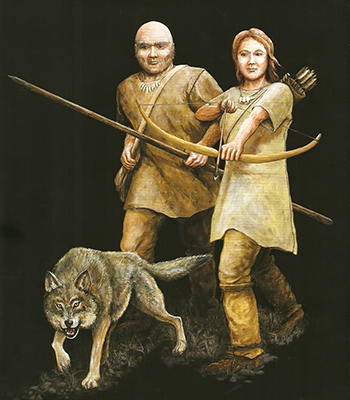 Artist's impression of the couple from Oberkassel. The bow corresponds to the Holmegaard type. An arrow head was found, too. It carries signs of use and retouches, even traces of birch pitch that was frequently used to fix flint stone to a wooden, bone or other support for knives, arrows or spears. The dog is an already domesticated companion of man, Canis lupus familiaris. 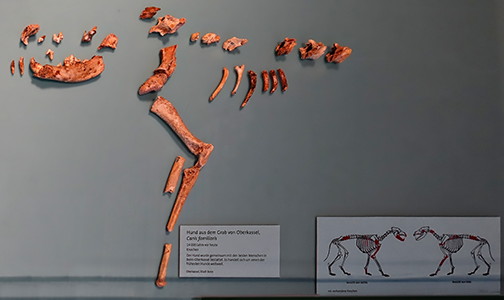 Skeleton of the dog buried with the two humans. 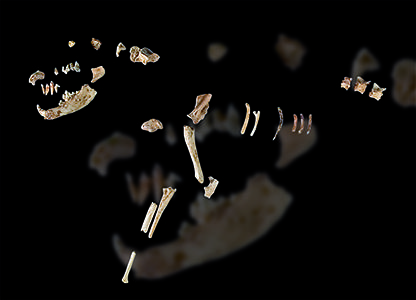 Bones of the dog found with the two human skeletons.

Genetic analysis has shown that the animal was a direct ancestor of today's dogs. 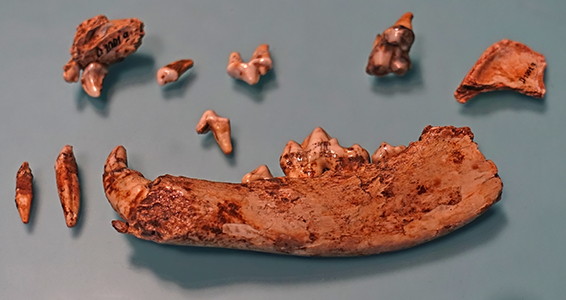 Mandible (jaw) and teeth of the dog buried with the two humans. 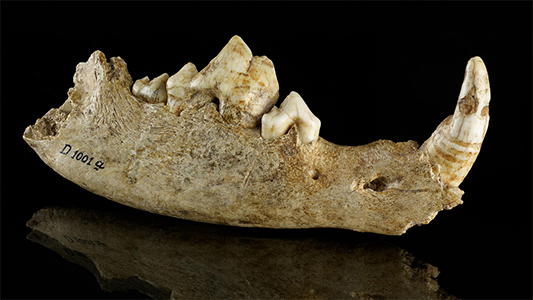 Mandible of the dog found with the two human skeletons. 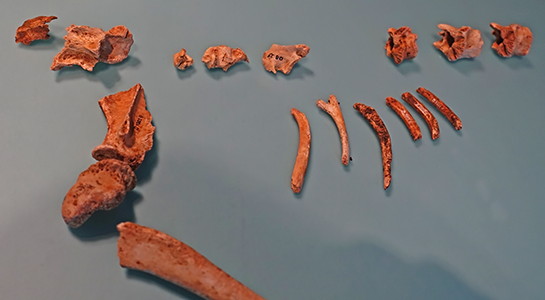 Bones of the dog buried with the two humans.

Haematite powder was found spread over the bodies and a number of small ornaments, pieces of 'jewellery', made of bone, antler and ivory: there was a penis bone of a brown bear, with cutting marks that were later covered with hematite; a bone stick (19 cm long) with an animal head (deer?) that was found near the woman’s head (a hairpin?) which shows strong polish marks of frequent use, Fig. 3; a damaged animal sculpture of elk antler, probably representing an elk, 110 mm long, 35 mm high, Fig. 4.

The male was quite sturdy and muscular (even for that time), about 168 cm tall, weight 72 kg. He was probably left-handed and had a (healed) broken right ulna and a less mobile right shoulder due to a heavy fall. Due to the handicap his left arm was even stronger than that of an ordinary left-handed person. He had lost two incisors from the lower jaw, and the upper jaw had lost all teeth but 4 molars. From his early youth he and the women must have been much on the move, very mobile. He had lost quite a few teeth and suffered from an inflammation in the lower jaw. Both showed signs of a medium strong peridontitis.

The female was more delicate even for a woman of that time, 159 cm tall and 54.5 kg in weight. She did not show any significance of a dominant arm and she had given birth to at least one child. The two persons were most probably relatives, however, the DNA analysis is not yet completed. Doubtlessly, they were tough people to earn their living and survive in a wild and dangerous environment with lots of risks, a much shorter lifetime (on the average) than we enjoy these days, and accidents or 'simple' inflammations easily brought them to the brink of death.

Text above: adapted from Bosinski (2014) 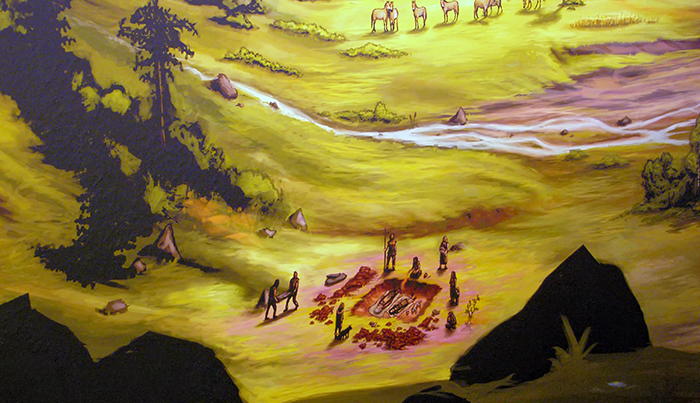 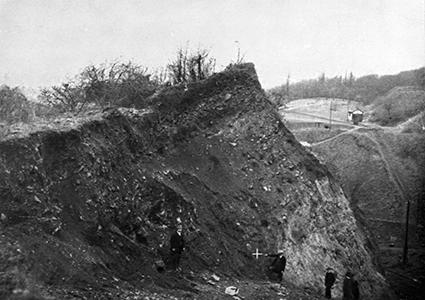 The original site of the discovery, marked on this photograph with a ' + '.

In February 1914 two workers when clearing debris in the quarry 'Am Stingenberg' discovered some bones, which they recognised as human remains. The bones and the surrounding soil they were coloured red. The bones were in good condition, the two skulls being almost unscathed. The work was interrupted and the teacher from Oberkassel, Franz Kissel, ensured that the discovery was preserved. Under one of the skulls was discovered an approximately 20 cm long, narrow bone article which was carved at one end. The skeletal remains were deposited in an old ammunition box that had contained that explosives for rock blasting.

The quarry owner Peter Uhrmacher reported the discovery to the University of Bonn. On 21 February, the physiologist Max Verworn, the anatomist Robert Bonnet and geographer Franz Heiderich went to Oberkassel. Since the notification of a 'hair pin', a piece of jewelery for a woman's hair that had been mentioned, the scientists initially believed that the discovery was from Roman or Frankish times. However, the hair pin they then recognised as a bone tool, which may have been used to scrape skins. (This is not possible, the head of the bone pin, see below, is much too small to have been used for this purpose - Don )

(left) Sculpture of a female Homo sapiens sapiens, dressed for warm weather, or in shelter.

(right) Sculpture of a male Homo sapiens sapiens, dressed for cold weather, outside. 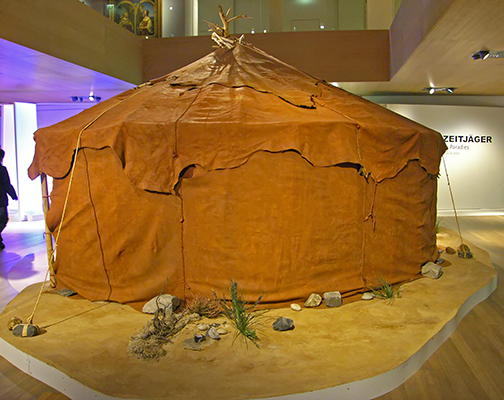 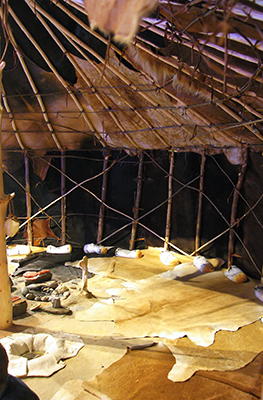 Leather covered tent, built like a yurt, which may have been used at Oberkassel.

Tents like this are also proposed for the archaeological site of Gönnersdorf.

If they were in fact used, they imply that the hunters lived in one area for a significant part of the year, since they are difficult and time consuming to make, erect, pull down and transport for reuse elsewhere. 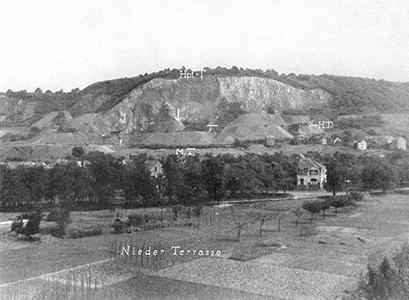 The white arrow indicates the position of the discovery layer. 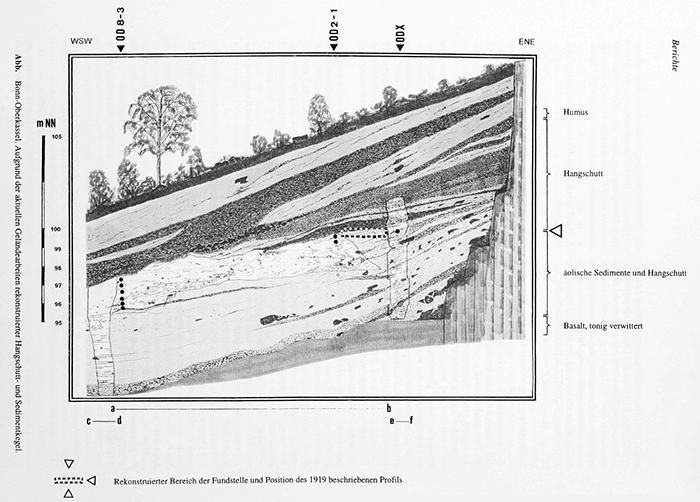 Reconstructed area of the site and position of the profile described in 1919.

Note that these 14C dates need to be calibrated to give the calendar dates shown, according to the graph below.

Because the amount of 14C in the atmosphere has not been constant over the last 50 000 years, we cannot just use the theoretical age based on the decay of carbon 14 atoms.

14C dates typically give dates which are younger than the real age of the sediments or objects tested. By comparing objects with a known age with the 14C dates calculated for them, the conversion spreadsheet was constructed. 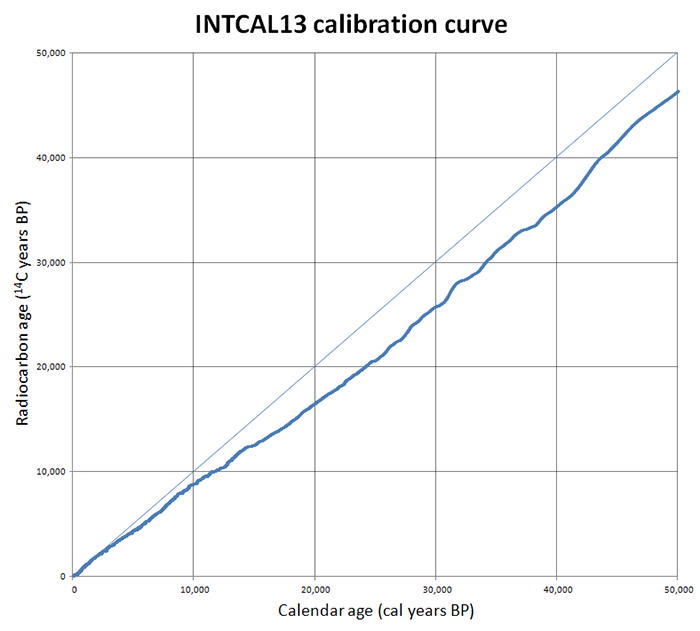 The Northern hemisphere curve from INTCAL13.

As of 2014 this is the most recent version of the standard calibration curve.

The diagonal line shows where the curve would lie if radiocarbon ages and calendar ages were the same.

At the time of writing, the following is a calculator which allows anyone to type in a radiocarbon age, and get the calibrated, actual calendar age.

Note that you must put in a value for the ± error, but it does not matter what it is: