The Taung Child fossil, discovered in 1924, consists of most of the skull, face, and mandible with teeth. It also has a natural endocast (imprint) of the braincase. It is about 2.5 million years old. The Taung Child is believed to have been about three years old at the time of its death. It was a creature standing 3' 6" (105 cm) weighing 20-24 pounds.

The Taung Child had a cranial capacity of 340 cm3, living mainly in a savanna habitat. Examinations of the Taung Child compared to that of an equivalent 9-year-old child suggest that Australopithecus africanus had a growth rate to adolescence which is about the same as that found in modern apes like chimpanzees rather than that of modern Homo sapiens. However, later species such as Homo ergaster/Homo erectus went through growth at rates between modern humans and apes. The evidence has mostly been based on that of Turkana boy discovered in 1984.

In early 2006 it was announced that the Taung Child was likely killed by an eagle (or similar large predatory bird). This conclusion was reached by noting similarities in the damage to the skull and eye sockets of the Taung Child to the skulls of primates known to have been killed by modern eagles. The left hand side of the endocast of the Taung child is covered in beautiful calcium carbonate crystals. 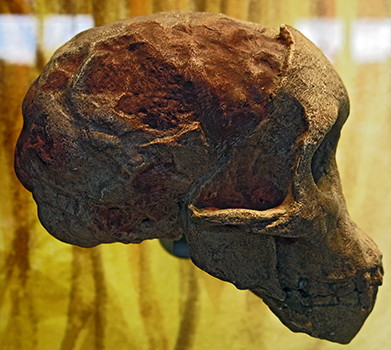 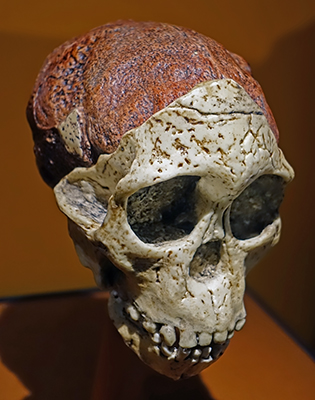 This is one of the oldest juvenile hominin skulls ever found. Microscopic analysis of its tooth enamel suggests it grew quite quickly, more like an ape than a human. Even though some permanent teeth have erupted, it was probably only three to four years old. 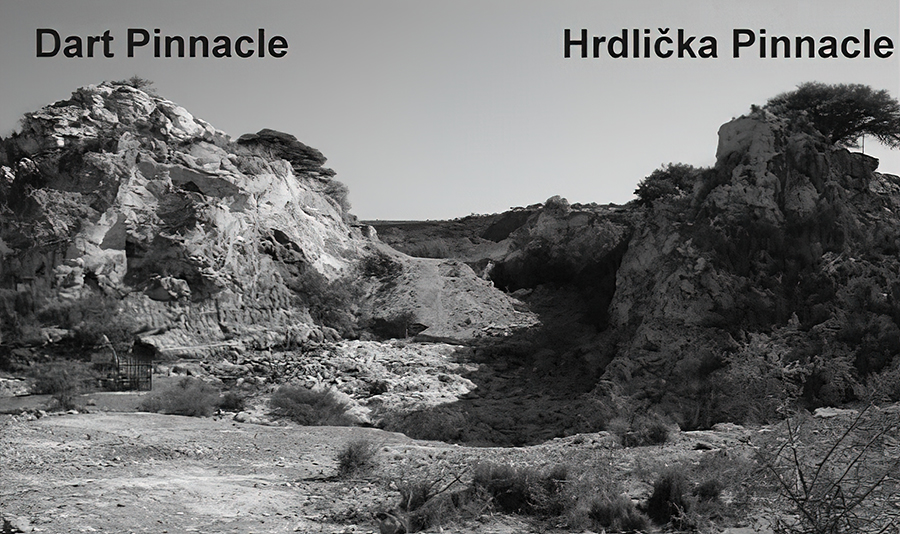 The Taung child was discovered here at the Buxton-Norlim Limeworks (Taung), in 1924.

This is a north-facing photograph of the area surrounding the Dart and Hrdlička Pinnacles.

The spot identified as the location of the 'Taung Child' by Peabody (1954) is indicated by the pyramid to the east of the Dart Pinnacle. Field of view is 55 m wide. 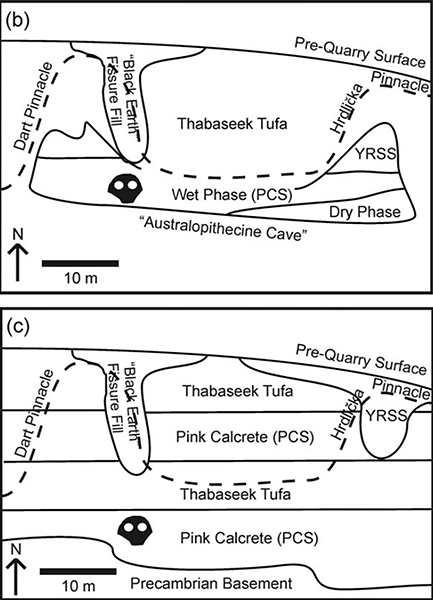 Coupe of the layers in which the Taung child was found.

(b) An illustration of the tufa cave model of the strati- graphic relationships at the Dart and Hrdlička Pinnacles. Modified from Peabody (1954)

(c) A reinterpretation of the stratigraphic relationships at the Dart and Hrdlička Pinnacles in light of the lithological and stratigraphic evidence presented in Hopley (2013). 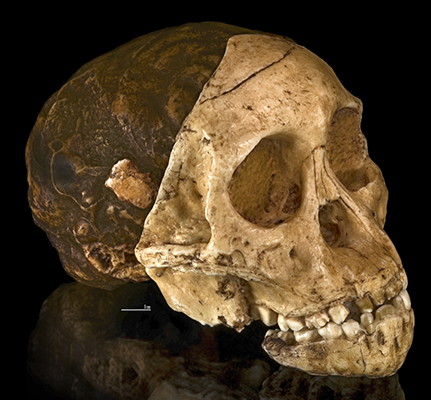 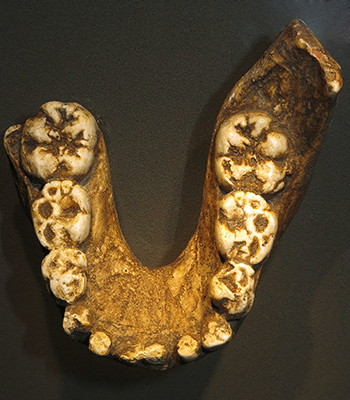 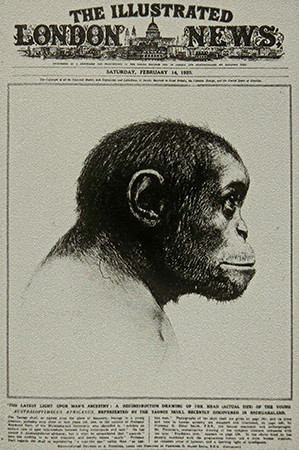 The discovery of the Taung child caused a sensation.

This is the cover of the Illustrated London News for 14th February 1925. 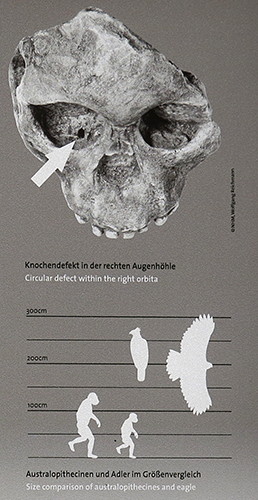 Eighty years after the 'Taung child' was first described, a spectacular theory was postulated on the cause of the individual's death.

Details of the way modern-day eagles hunt smaller monkeys helped to identify the lesions on the child's facial skull as traces of an attack by birds of prey.

Humans’ distant ancestor Australopithecus africanus had a unique approach to raising their young, as shown in new research published in Nature.

Geochemical analysis of four teeth shows they exclusively breastfed infants for about 6-9 months, before supplementing breast milk with varying amounts of solid food until they were 5-6 years old. The balance between milk and solid food in this period varied cyclically, probably in response to seasonal changes in food availability.

This knowledge is useful on several fronts. From an evolutionary point of view, it helps us understand the particular biological and behavioural adaptations of Australopithecus africanus compared to other extinct human ancestors and modern humans.

However, breastfeeding for up to 5-6 years is metabolically expensive – it requires a certain input of calories for the lactating mother. Using milk as a supplemental food for older offspring may have hampered the ability of the A. africanus species to successfully survive during a period of substantially changing climate.

Perhaps this way of life hastened the extinction of A. africanus around 2 million years ago. 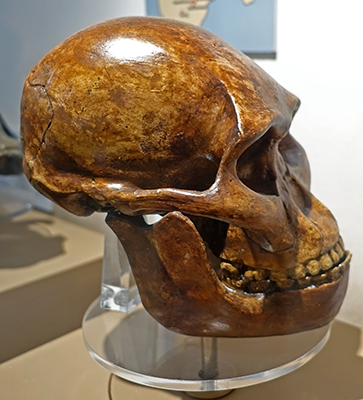 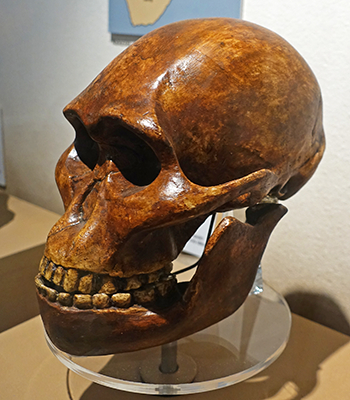 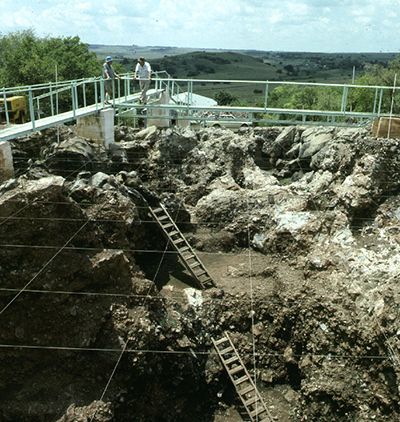 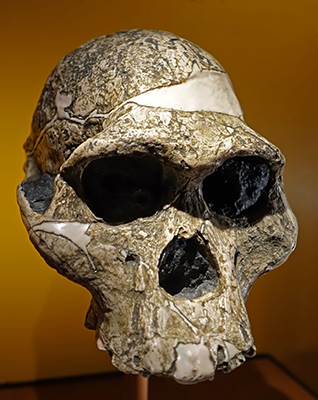 This is the most complete skull of Australopithecus africanus ever found. It had a shorter face than the Australopithecus afarensis species, and strong cheekbones to support large chewing muscles. Its brain was similar in size to that of modern apes such as chimpanzees.

They used dynamite to free the skull from the stone in which it was entombed, which is why there is a missing piece on the forehead. Anthropologists now take a lot more time and care to free specimens from the matrix they are found in.

Note that the age of STS 5 has been recalibrated to a much older date by better dating methods, by Granger et al. (2022). 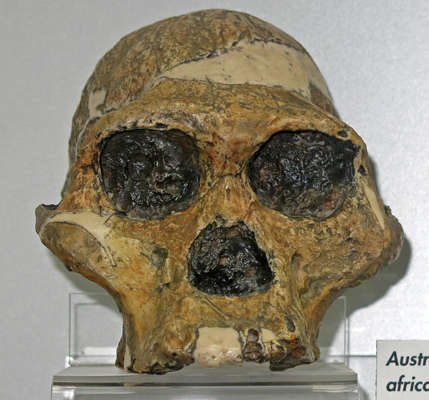 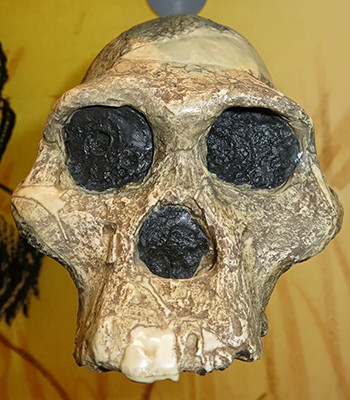 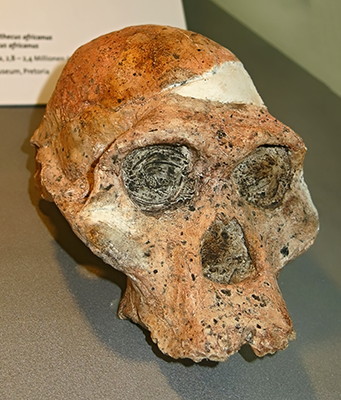 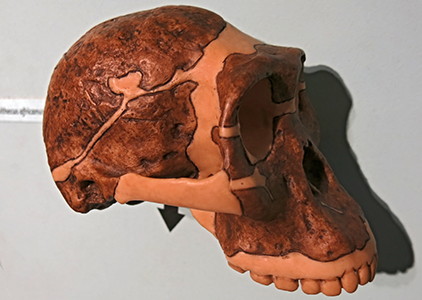