Hajducka Vodenica is another site in the Iron Gates area. At this site, prehistoric settlements and/or cemeteries covered a strip 12m wide along the river bank, having been significantly destroyed by river erosion and the later interments in the central part of the cove below the Late Roman fortress. It seems that only one third of the space originally containing Mesolithic settlement was preserved.

Map of the Iron Gates region, with the position of Hajducka Vodenica marked.


The following text and photos are from the excellent monograph by I. Radovanović, 'The Iron Gates Mesolithic', 1996. It is essential reading for anyone hoping to get some understanding of the mesolithic in the Iron Gates region. 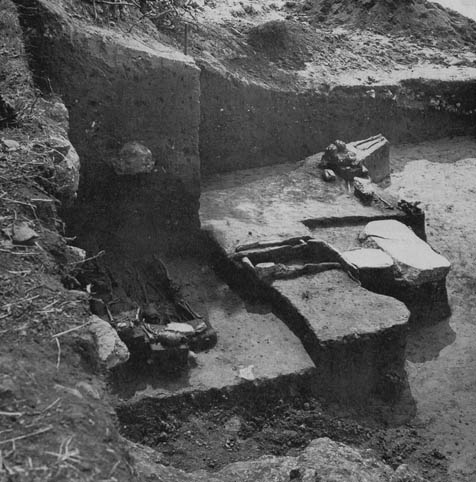 Hajducka Vodenica Ib, later building structure in the central space: rectangular hearth with a side channel, and a threshold.

Apart from three burials of adults in extended position in the settlement area, a "chamber tomb" dug into the rock in the rear of a house (associated with two stone sculptures) is recorded. The chamber tomb contained three levels of burials with 27 individuals of both sexes and various ages (except infants). The deceased were interred either in extended position with the same orientation or as secondary burials. Grave goods are exceptionally rare (antlers, mandibula of a large herbivore, and a stone axe in three cases respectively).

Burials are around the hearth and at the rear of the structure, i.e. at the entrance to the chamber tomb. The chamber tomb was not yet excavated when this photograph was taken.

Plan of Hajducka Vodenica, field sketch with burials and hearths. The rectangular hearth and the threshold in the photo above are near the burial marked as 11 on this plan. .
Photo: The Iron Gates Mesolithic, I. Radovanović

Burials around the hearth of the house in the central zone with a chamber tomb dug into the limestone in its rear. B. Jovanovic .
Photo: The Iron Gates Mesolithic, I. Radovanović