For a fuller discussion of Mousterian and Acheulean tools, readers should look at the page on tools.

I have reorganised and added to this page, to include sections specifically on the development of the ancient Acheulean hand axe by Homo erectus and the various types of this important tool, and the mastery of its creation by Homo neanderthalensis, who not only made it in the classic fashion, working on a core or nucleus bifacially, known as Moustérien de tradition acheuléenne or MTA, but also took flakes and turned them into bifacially worked Acheulean hand axes. There is a short summary of the development of such tools right through to Neolithic arrow heads, followed by a longer section on the step by step development of the full range of tools from choppers through to the bow and arrow. 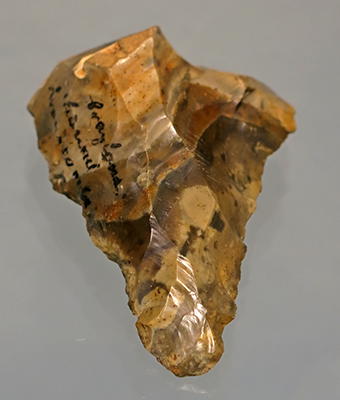 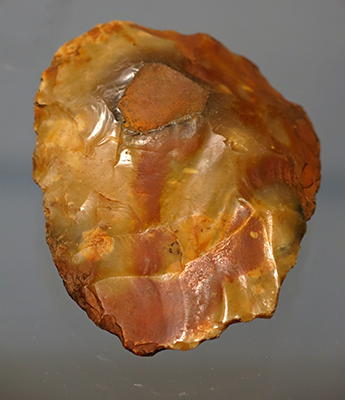 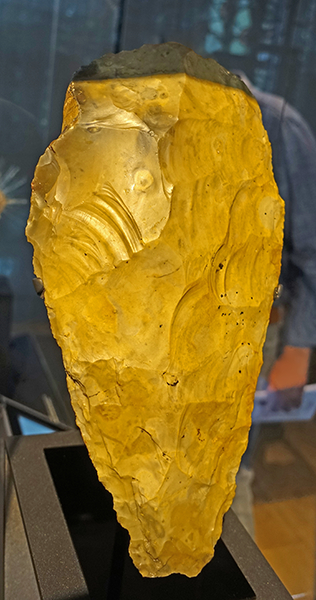 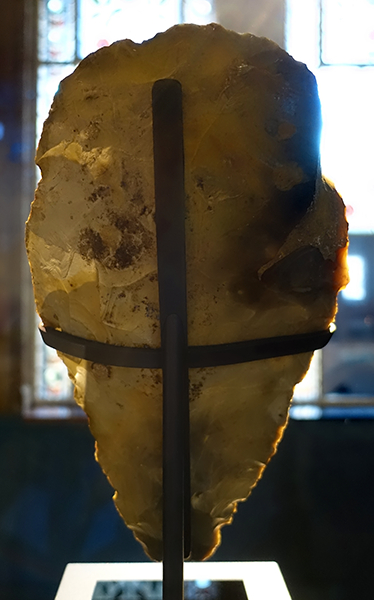 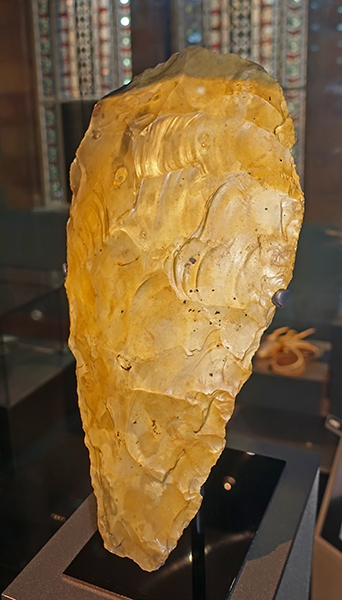 This is the largest handaxe ever found in Europe. It measures 32 cm long, and weighs 2800 g.

Its remarkable size, roughly twice that of other handaxes discovered, has raised questions about its purpose. Too large for practical use, it may have had a symbolic function, or been used as a status object, to demonstrate the skills of its makers.

The axe is remarkable for its symmetrical proportions, a clear indication of the high level of aesthetics amongst Neanderthals.

It was produced by the Acheulian culture of 400 000 years ago, during the Lower Palaeolithic period. It was found in Furze Platt, Berkshire, Britain in 1919. 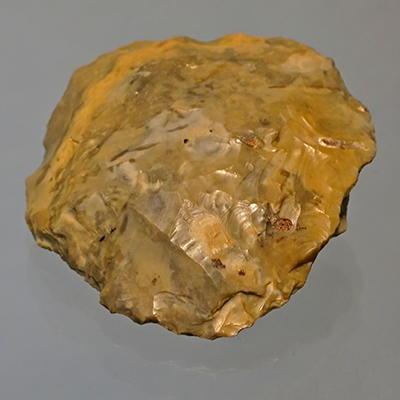 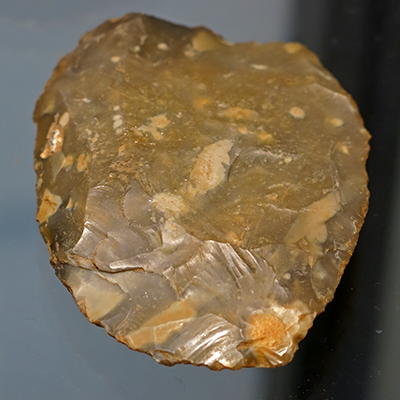 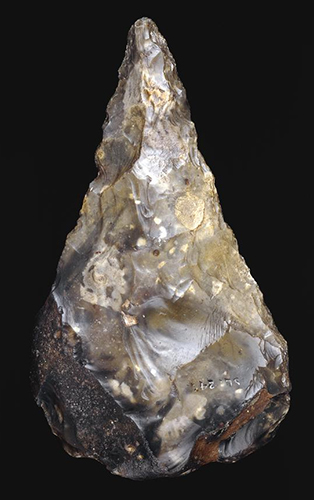 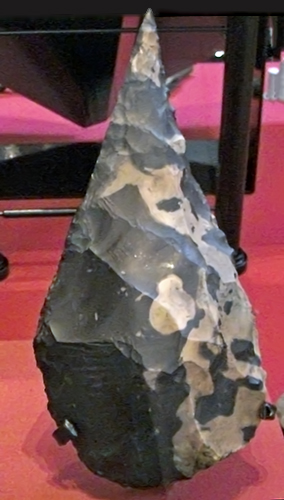 Left:
The Gray's Inn Lane Hand Axe is a pointed flint hand axe, found buried in gravel under Gray's Inn Lane, London, England, by pioneering archaeologist John Conyers in 1679. The hand axe is a fine example from about 350 000 years ago, from the Lower Palaeolithic, and probably made by Homo erectus, who made most of these sorts of hand axe.


Right:
Another Acheulean hand axe was discovered by John Frere in the 1700s, when he investigated a four metre deep pit (dug by brickworkers) at Hoxne, in England. 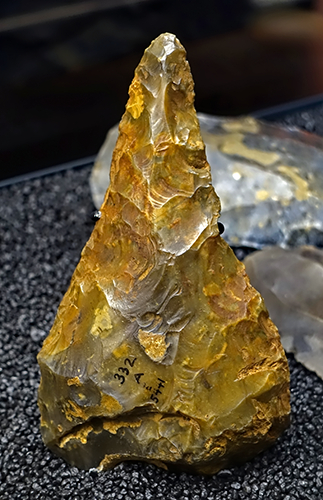 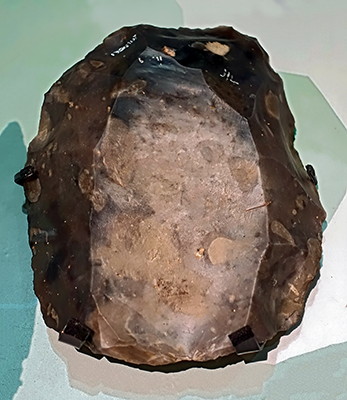 ( This is a beautiful piece, showing clearly the scar from the preparation and removal of a single classic levallois flake following circumferential preparation of the flaking surface. The flint appears to be fossiliferous - Don )

The site of Baker's Hole in the Ebbsfleet valley, Kent, is the best-known British Early Middle Palaeolithic (MIS 9–7) site, and has produced a substantial assemblage of Levallois artefacts. 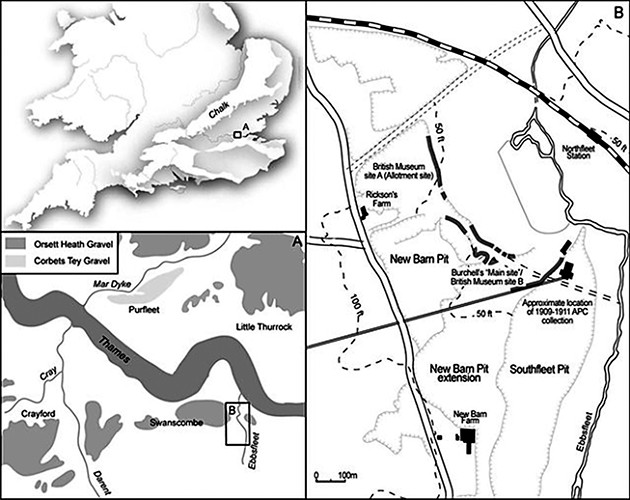 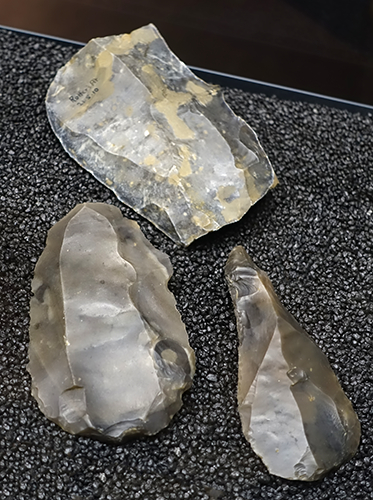 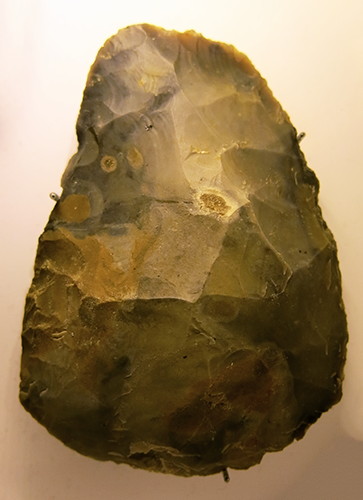 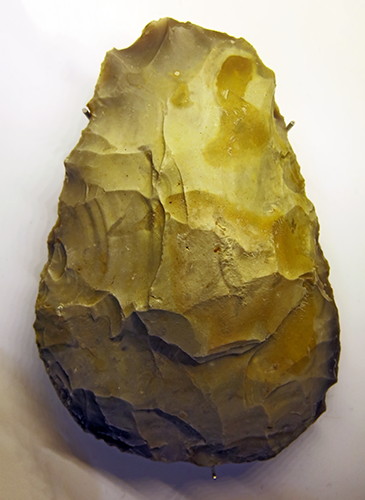 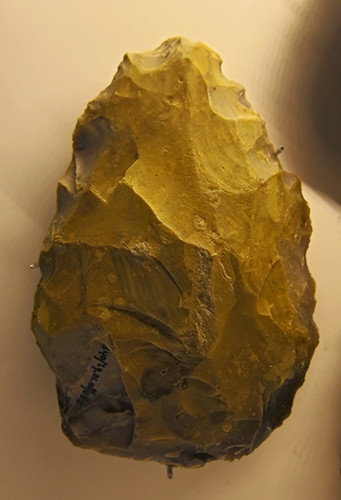 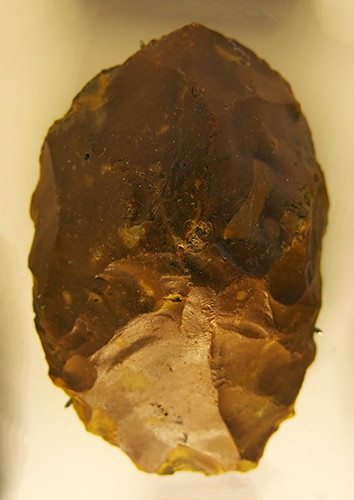 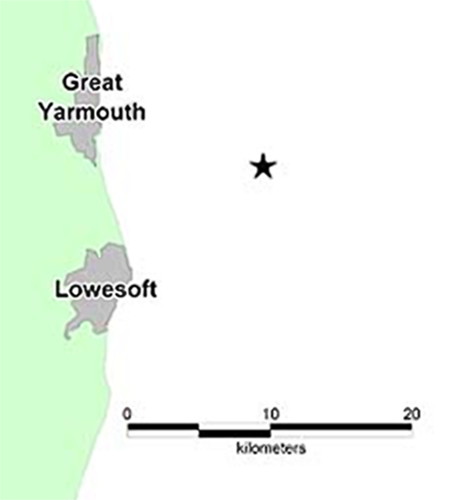 Four Neanderthal handaxes, recovered from the bed of the North Sea offshore from Yarmouth by dredging.

An amazing haul of 28 flint hand-axes, dated by archaeologists as around 100 000 years old, have been recovered off the coast of Norfolk.

The remarkable find was made by a Dutch amateur archaeologist, Jan Meulmeester, who sifted through gravel unearthed from a licensed marine aggregate dredging area 13km off Great Yarmouth and delivered to a wharf in southern Holland. Reckoned to be the finest hand-axes that experts are certain come from English waters, the rare finds show that deep in the Ice Age, mammoth hunters roamed across land that is now submerged beneath the sea.

'These finds are massively important', said Ice Age expert Phil Harding of Wessex Archaeology and Channel 4’s Time Team. 'In the Ice Age the cold conditions meant that water was locked up in the ice caps. The sea level was lower then, so in some places what is now the seabed was dry land.' 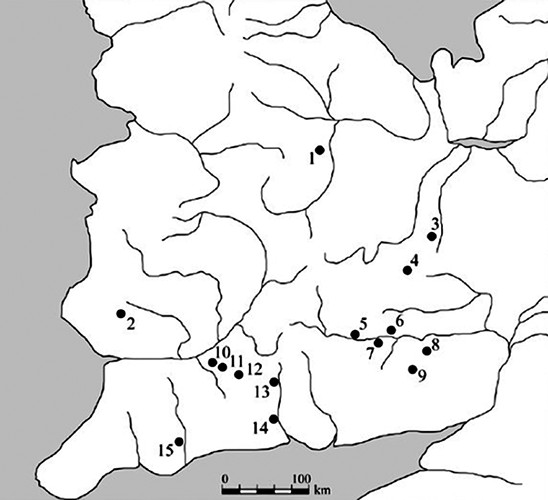 The landmass is shown with approximately -50m sea levels, circa 50 000 BP. 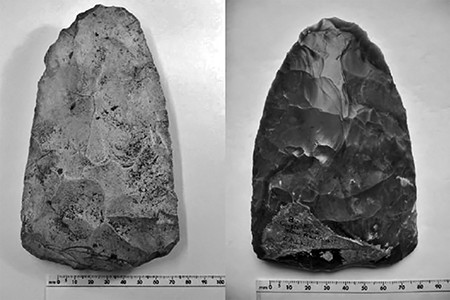 The two most classic (or extreme) examples of bout coupés. 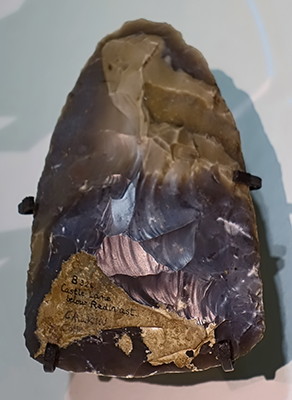 Catalog: B324, Castle Lane below Redbreast, Bournemouth
Photo: Don Hitchcock 2018
On loan from the Trustees of the British Museum
Source and text: Musée de l'Homme, Paris

This piece is from a collection of lithic artefacts unearthed during the building of a house called Beedings on a scarp crest near Pulborough in West Sussex.The discovery was probably made in 1900. The collection is very obviously multi-period, but it includes the largest group of Early Upper Palaeolithic artefacts from south-eastern England. Attributed to this time are leaf-points, end-scrapers, and burins.

While recent selection has much reduced the collection it also appears to contain contemporary cores and debitage and evidence for the production of bladelets. In a British context this find is unique and in a European perspective it is one of the richest assemblages attributable to the Lincombian–Ranisian–Jerzmanowician technocomplex.

The age of this technocomplex is poorly constrained, but Jacobi (2007) argue that it belongs to the earliest part of the Upper Palaeolithic, starting earlier than the local Aurignacian. The Upper Palaeolithic material from Beedings is interpreted as having come from a hunting camp situated so as to exploit the extensive views across the western Weald.