Several teeth from an adult and children, and the fossilised mandible of a diminutive species of early human that lived 700 000 years ago have been discovered on the Indonesian island of Flores. It is thought to be the direct ancestor of the Hobbit of Flores, the 1.1 metre tall human species that lived around 50 000 years ago. 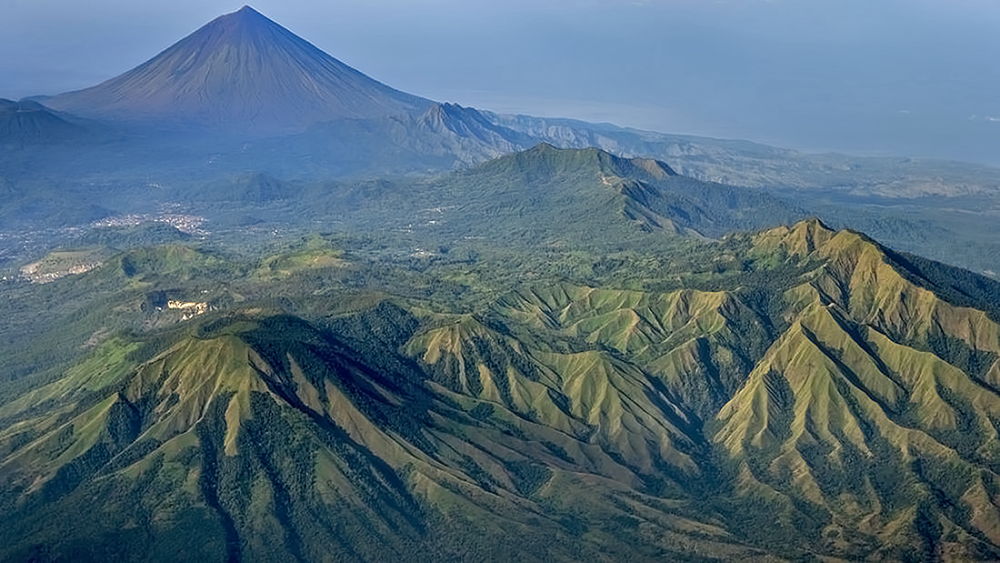 The volcanic landscape around Mata Menge, where the older 'hobbits' were found. 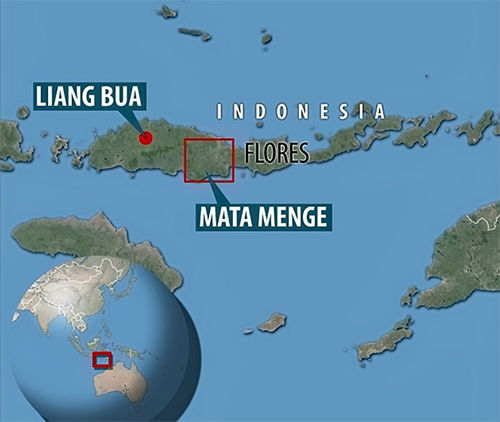 Location of the latest finds. 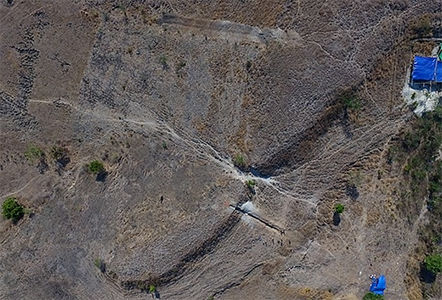 Aerial photo of the general site. Note the filled in trench at the top of this image, possibly in a sterile area. 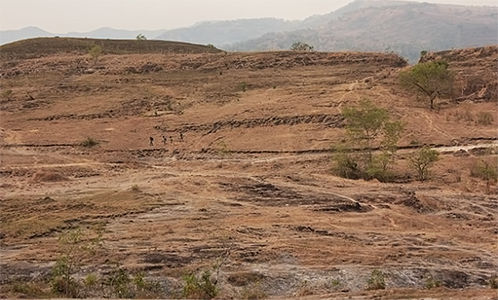 The fossilised mandible of a diminutive species of early human that lived 700 000 years ago has been discovered on the Indonesian island of Flores. It is thought to be the direct ancestor of the Hobbit of Flores, the 1.1 metre tall human species that lived around 50 000 years ago. 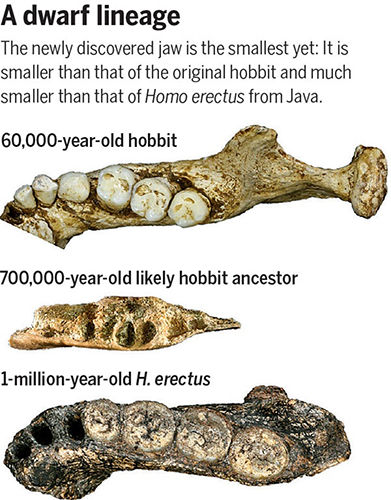 A good comparison of the relevant mandibles from sciencemag.org. 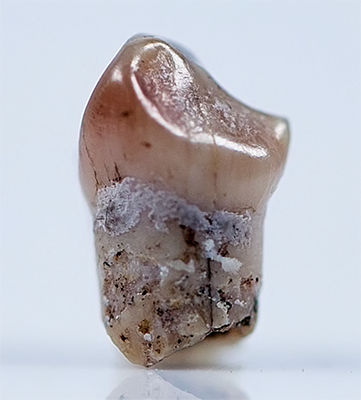 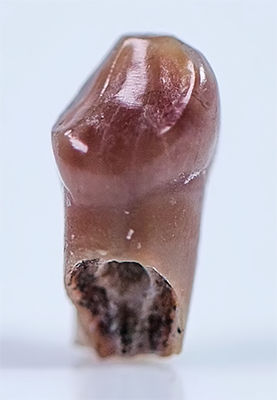 The tooth of an adult found at the site. 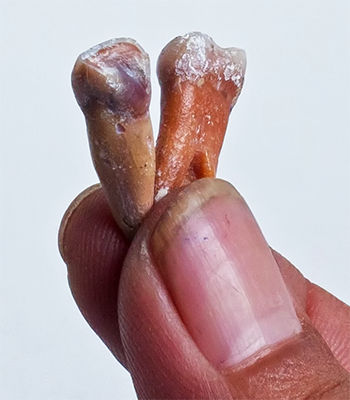 The two milk teeth from children found in the deposit. 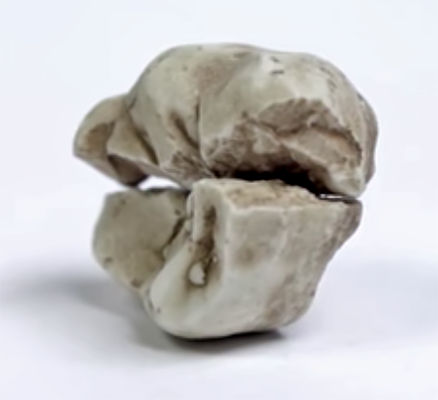 Aerial shot of the particular part of the dig in which the new discoveries were made. 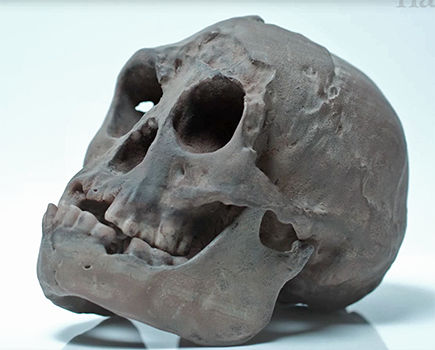 This is the skull of one of the Homo floresiensis from Liang Bua cave. 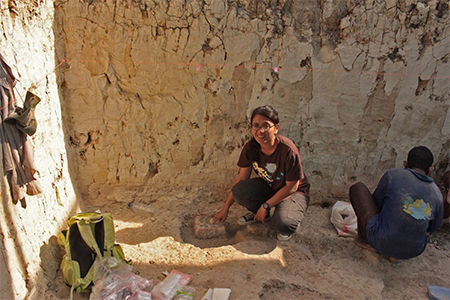 Location where the mandible was found, and the discoverer.

The fossils were found in a deposit of sandstone (pictured) which is thought to be laid down by an ancient stream. Dating techniques revealed the fossils were 700 000 years old.

PhD student Mika Puspaningrum is pictured pointing to where she found the mandible fragment in October 2014. 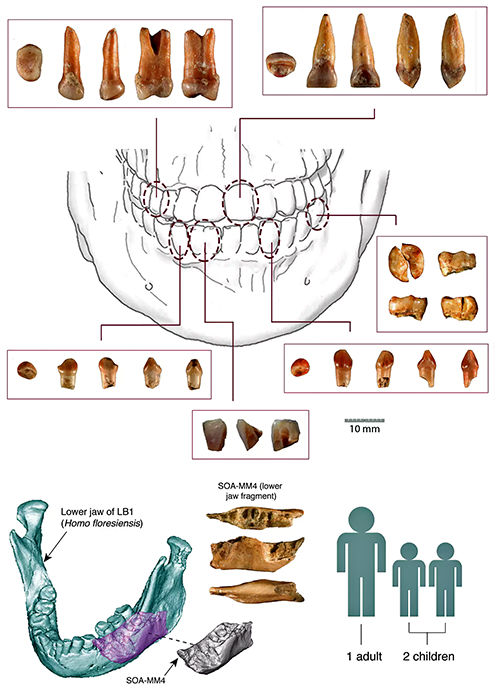 This is a very clear diagram of the hominin fossils found at Mata Menge, and their source in the jaw of the hominin, thought to be similar or identical to a diminutive Homo erectus.

As noted in the diagram, the fossils are believed to be from one adult and two children. 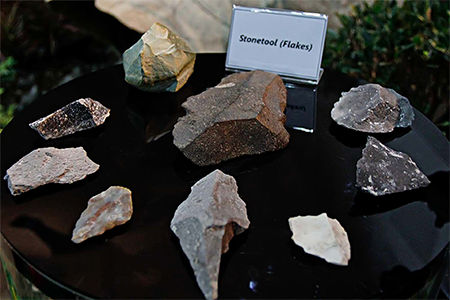 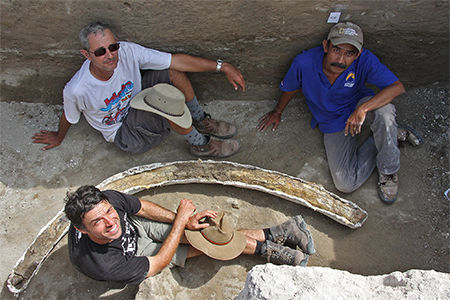 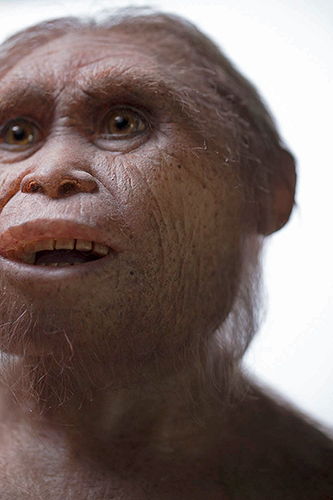 Recreation of the later hobbit. 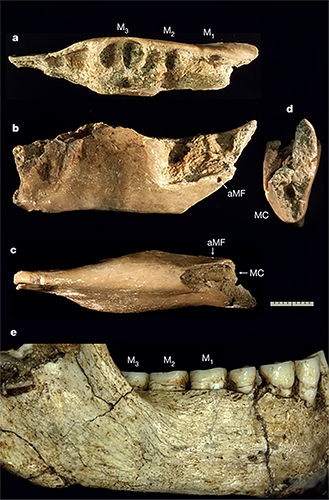 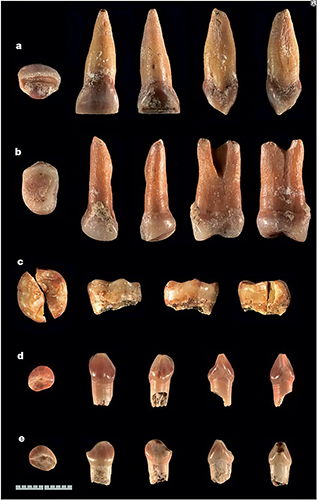 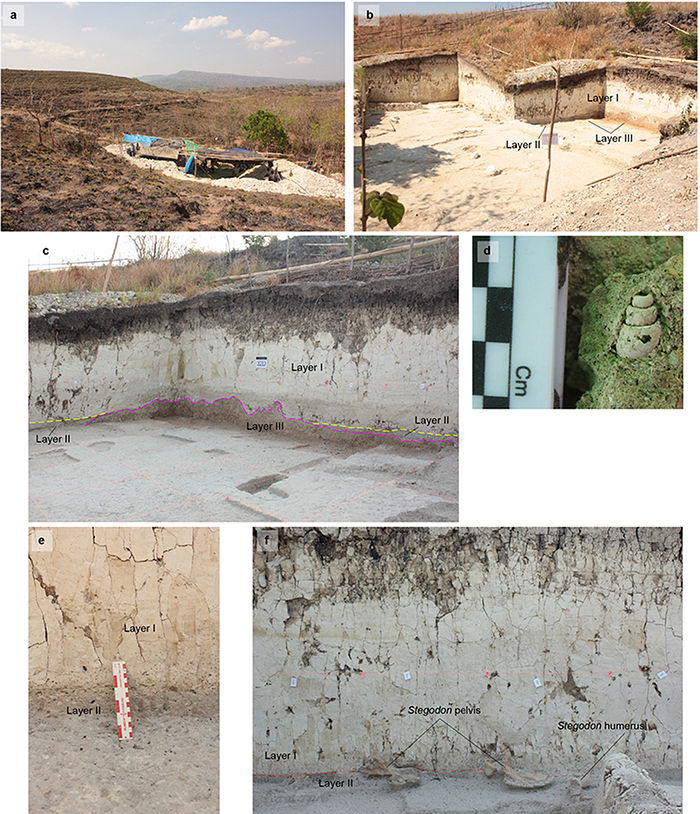 a, View of Excavation 32 (trench E-32) in 2014, taken towards the north-north-west. The dip slope visible in the background is the eastern flank of the Welas Caldera, which was the source for many of the volcanic products deposited in the area. Photo and text:Brumm et al. (2016) 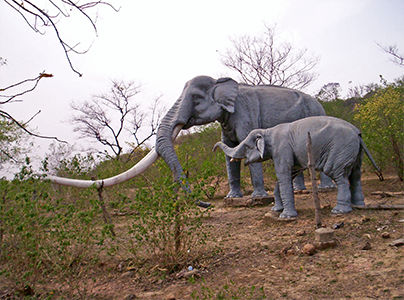 Stegodon is a genus of the extinct subfamily Stegodontinae of the order Proboscidea. Stegodonts were present from 11.6 mya to late Pleistocene, with unconfirmed records of regional survival until 4 100 years ago. Fossils are found in Asian and African strata dating from the late Miocene. They lived in large parts of Asia, East and Central Africa and North America during the Pleistocene. 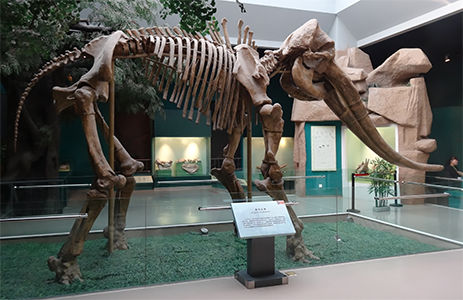 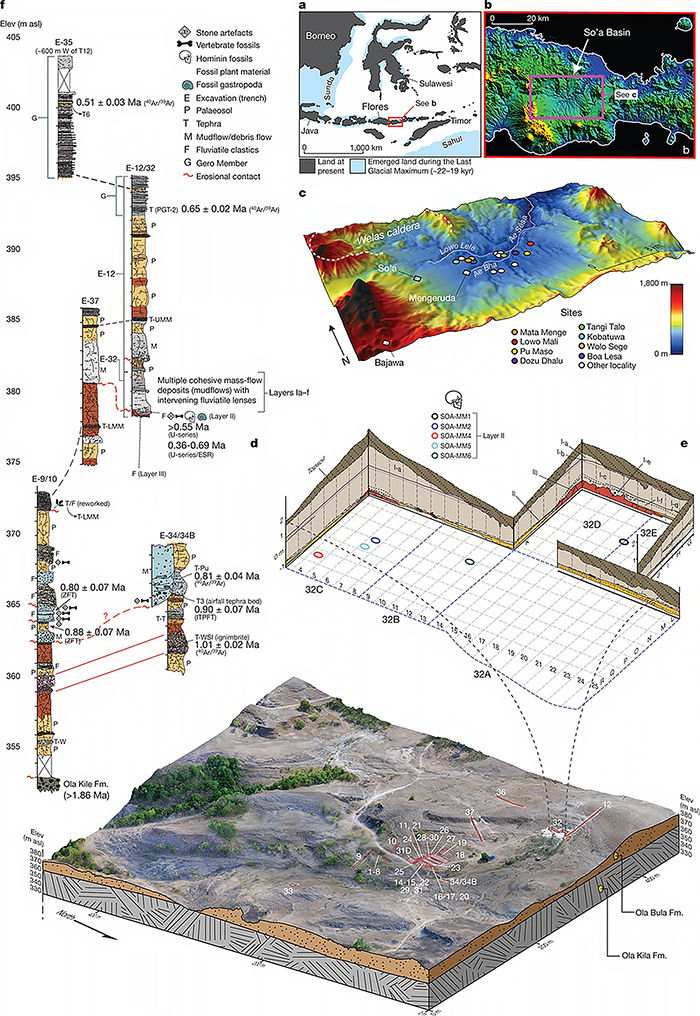 Context and chronology of the hominin fossils at Mata Menge.

a, b, location of Flores and the So'a Basin.

c, Digital elevation map of the So'a Basin, with location of Mata Menge and other sites mentioned in the text. A single outlet of the main river system (the Ae Sésa) drains the basin via a steep-walled valley towards the northeast.

d, Stratigraphy and chronology of the main fossil-bearing intervals and intervening Ola Bula Formation (OBF) deposits at Mata Menge. Several basin-wide key marker tephra beds that are exposed in the hill flank on the northern side of Mata Menge (trench E-34/34B) are eroded in the central part of the stream valley, where they are replaced by a 4–5-m-thick sequence of tuffaceous mudflows with intervening fluvial lenses forming the lower fossil-bearing palaeovalley-fill sequence.

e, f, Context of the hominin fossils; f is a 3D image of Mata Menge and surrounds, with excavated trenches outlined in red and labelled, and e is a 3D representation of the stratigraphy exposed by trench E-32A to E, with coloured ovals denoting the positions of in situ hominin fossils (SOA-MM1, 2 and 4-6) excavated from the fluvial sandstone unit, Layer II. The remaining hominin specimens were retrieved in the sieves.

Trenches E-1 to E-8 were excavated between 2004 and 2006, at the section originally excavated by Th. Verhoeven in the 1950s5, 6. The remaining trenches were excavated between 2010 and 2015. E-12 is a slot-trench excavated into the side of a hill, revealing an 18-m-thick sequence of lacustrine clays and micritic limestones, fluvial sandstone beds, massive tuffaceous mudflows, well-developed clay-textured palaeosols, and numerous centimetre-thick basaltic tephra inter-beds from the middle-upper part of the OBF.

At the base of this slot-trench, a less than 30-cm-thick fossil-bearing sandstone unit (Layer II)—from which all the hominin fossils were retrieved—was exposed.