The Upper Paleolithic site of Khotylevo 2 is situated 400 km SSW of Moscow and 25 km NW of Bryansk. The site was discovered in 1968 by F.M. Zavernyaev. 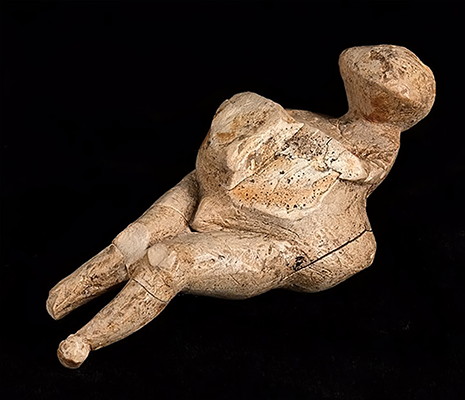 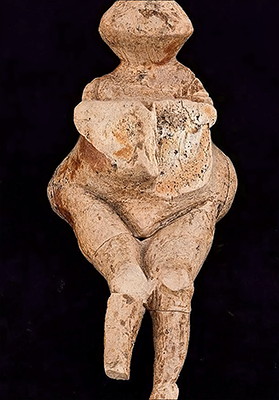 The recently discovered venus from Khotylevo 2. 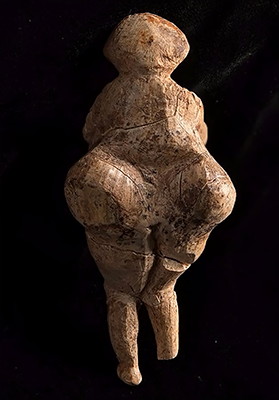 The venus shares some characteristics of venus figures much further east on the continent, from Kostienki, Gagarino, and Avdeevo, and is obviously from a similar culture. 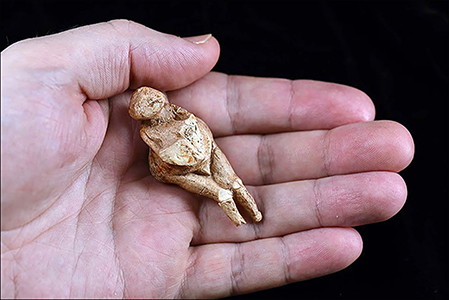 The venus is only five cm long. 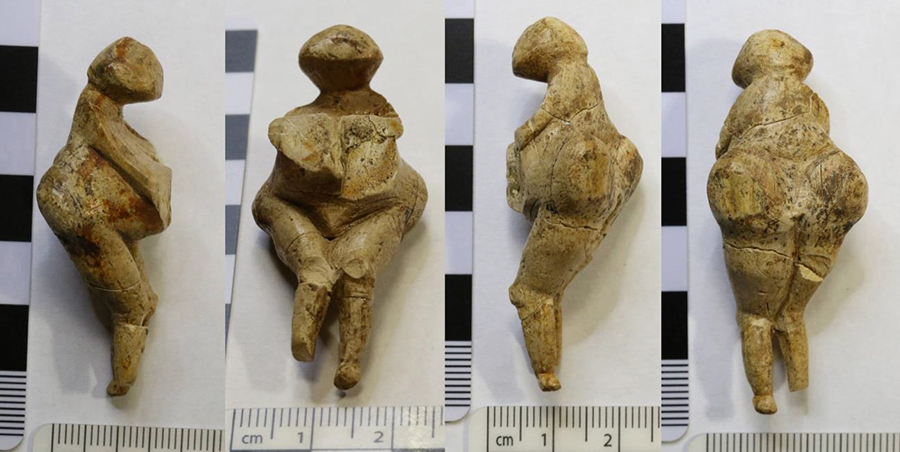 The venus is made of ivory. 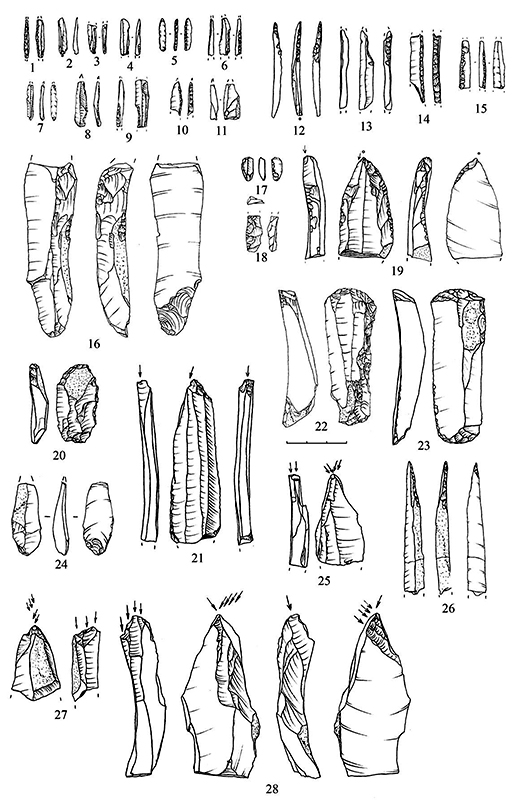 Lithics from the site.

The lithic assemblages from both excavated sectors display practically identical technological and morphological characteristics. The total number of lithics collected from the 2003-2016 excavations amounts to 4 500 items. These include core blanks, core reshaping flakes, primary flakes, and partings of the raw material. The entire cycle of primary knapping of flint and its usage had been performed within this area. The most representative series of implements include burins, end-scrapers, various points on blades, and microtools, such as microblades and backed bladelets.

There are occasional finds of Kostenki-type knives, including one of a classic variant of the type, which is not typical for the Khotylevo 2 assemblage. One of the recovered implements may be considered as a fragment of leaf-shaped point of the Kostenki type. Some bone and ivory tools were found in these sectors in addition to flint implement. There are ivory point and spatula made from mammoth rib among these artefacts. 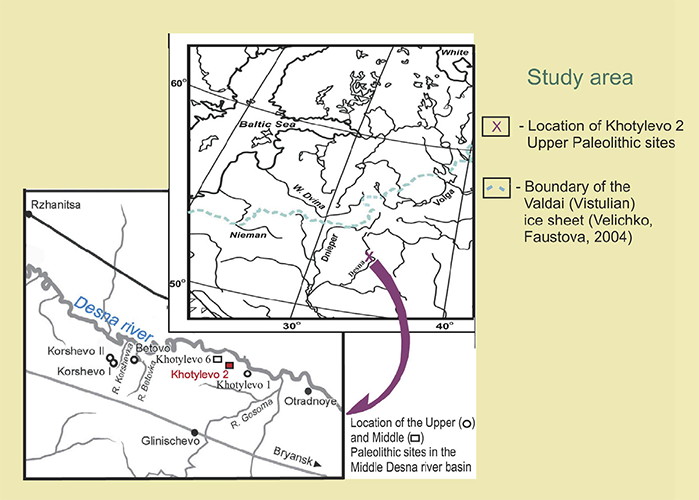 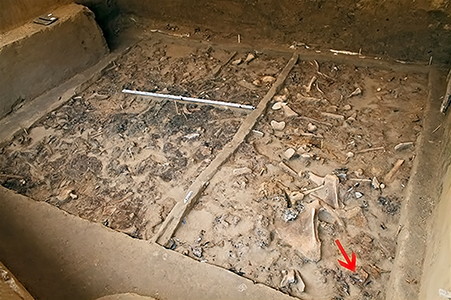 The position at the site where the venus from Khotylevo 2 was discovered. 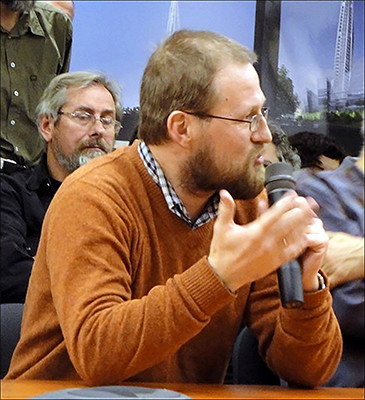 He says that the exceptionally rare Venus figurine is made from a mammoth tusk and it portrays a fat, perhaps pregnant woman, with a big belly and bust. Part of the bust and belly has peeled off along a natural crack in the tusk. The figurine was found near large limestone layers and parts of mammoth bones that were coated with a mineral sienna (iron and manganese oxide) paint.

Most likely, the statuette was placed next to the bones on the ground rather than buried like other Venus figurines.

Photo and text: Institute of Archeology and Ethnography, http://siberiantimes.com/

Similar examples have been found in Siberia, notably close to the Angara River near Lake Baikal, but the most recent analysis suggested these were - in fact - clothed, contrary to earlier examinations, and evidently unlike the new find from the Khotylyovo-2 site in Bryansk region.

Archeologists have been exploring the site since 1993.

Radiocarbon analysis suggests tribes of hunters and gatherers lived there 21 000 to 24 000 years ago.

Scientists have found numerous bones of mammoths, bison, as well as many flint artefacts. 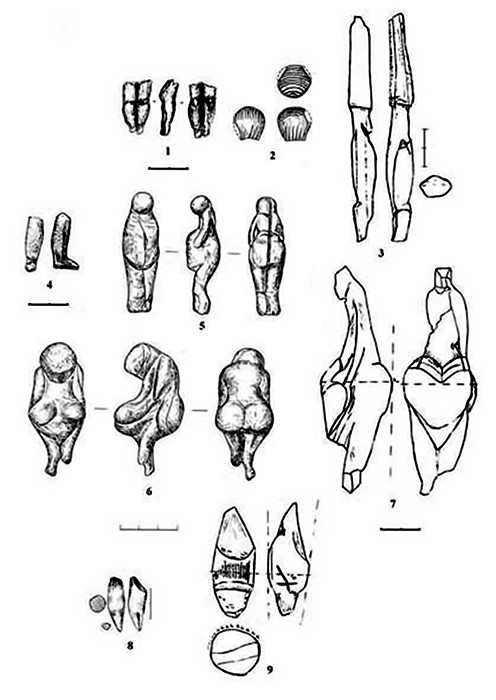 Other venus figures from the Khotylevo II site. 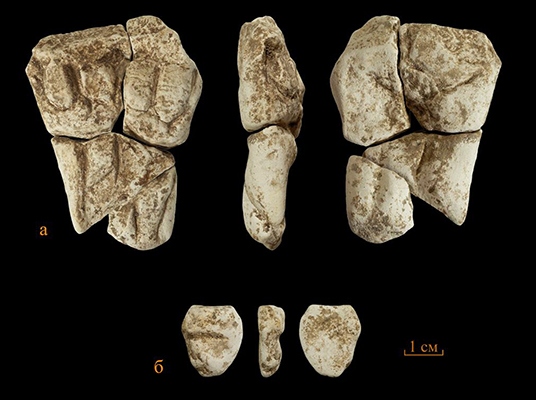 Double female statuette and schematic figure carved out of chalk.

The double female figurine (N° 1) can be described as a flat sculpture. Its dimensions are 58.5 x 44.5 x 15mm. The two female figures are shown side by side on the front of the trapezium-shaped chalk slab. They were rendered in bas-relief, in a realistic manner, characteristic of the Eastern Gravettian. Breasts, abdomen and legs down to their ankles are carved while hands and heads are missing.

The back surface of the statue, worn smooth, lacks realistic details. The lower half of the back side is divided into two parts by a broad vertical groove, corresponding to the image of the two female figures on the face of the statuette. The statuette was broken into four fragments, apparently of old. One of them is an image of two women with breasts and abdomen, the second –two fragments for the legs– represents the lower part of the legs.

However, one of these fragments, namely the lower part (foot) of the right figures has not yet been found. The side surfaces are smoothed. The top piece was divided into two parts after falling into the cultural layer as a result of natural post-deposition processes. Thus, the sculpture consists of four fragments. 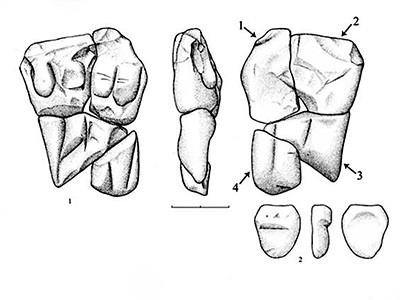 Double female statuette and schematic figure carved out of chalk.

Figure N° 2 is 18 x 16 x 7/6mm. Both figurine and figure are close enough in their proportions, despite their difference in size. The second one is a flattened figure, also trapezium-shaped. One of its sides, perhaps its 'front', is divided by a horizontal groove into two parts. The other side, its 'back', is flat. So, the widest part of the figure, as with the statuette, would be its top. All the surfaces of the figure were smoothed.

We interpret it as the schematic image of a woman. We assume that the front parts correspond to the breast (top), abdomen and legs (bottom).