Die Rote von Mauern is a venus statuette in limestone, 27 000 years old, covered with red ochre when found at the Weinberghöhlen caves near Mauern, Bavaria. Lothar Zotz, on 24th August 1948, found the 72 mm tall limestone venus figure on the outer slope between cavities two and three of the Weinberghöhlen. During 1937-38, 1947-49, 1967 and 1974 bone fragments and traces of mammoth, cave bear, woolly rhinoceros, reindeer and 20 other different animals were found at the caves, as well as high quality Blattspitzen or leaf points of Mousterian / Neanderthal origin.

The Weinberghöhlen Caves near Mauern, Bavaria, in which the Rote von Mauern was found.
Photo: jokreu via Panoramio 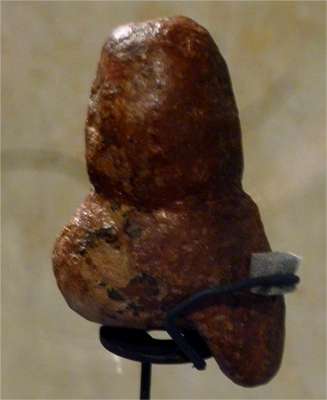 The red venus of Mauern is a fertility object of limestone, from the Weinberghöhlen caves near the vineyards of Mauern, district of Neuburg an der Donau. Approx. 25 000 BC 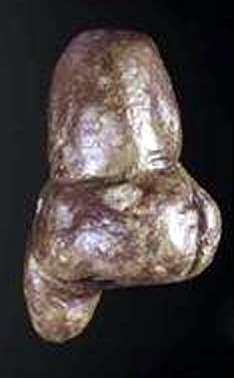 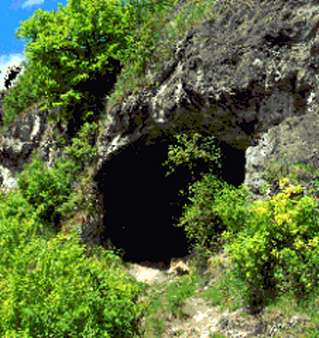 In 1948/1949 Lothar Zotz, University of Erlangen, Germany, directed excavations in the the Weinberghöhlen caves, and on 24th August 1948 found the Rote von Mauern, a 72 mm tall, red ochre coloured limestone venus figure, on the outer slope between cavity two and three.

Michael Eckstein (1903-1987) conducted research at the Weinberghöhlen and brought a lot of artifacts to the museum in Neuburg. Unfortunately, the caves remain closed due to rock fall hazard.

Usually the venus of Mauern is located in the "Archäologische Staatssammlung München". It stems from the Gravettien, and is 72 mm in length, covered with red ochre, made of limestone.

The leader of the excavations was Professor Dr. Lothar F. Zotz (* 6th December 1899 in Heitersheim; † 1967) a German Prehistorian of the university of Erlangen.

The location of discovery is the Weinberghöhlen (= vineyard caves) near Rennertshofen-Mauern in the Landkreis (District of) Neuburg-Schrobenhausen, Bavaria

Mauern is a village and parish of the district market of Rennertshofen in the district of Neuburg-Schrobenhausen in Upper Bavaria.

Upper Mauern and its districts are located north-northeast of the capital at the beginning of the Rennertshofen Wellheimer dry valley in the hilly landscape of the Southern Franconian Alb.

Settlement traces indicate an early settlement of the Mauern area. In the Weinberghöhlen caves are numerous relics of the human past. On the southern outskirts, there were remains of a Neolithic settlement and a Celtic iron-smelting centre. Within today's church was a Roman estate (there is still a Roman grave monument in the church). There are still remnants of a Roman wall in the area. 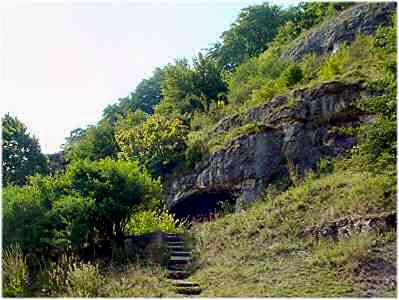 View of the Weinberghöhlen and the steps leading up to it.

View of the Weinberghöhlen from the valley floor, across a ploughed field.

This shows the metal grids put up to keep visitors from being injured or killed by falling rocks as dotted lines on the plan. 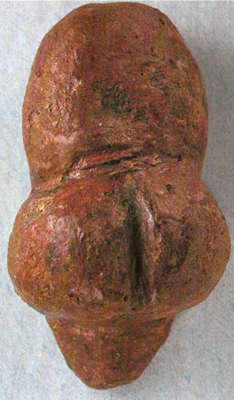 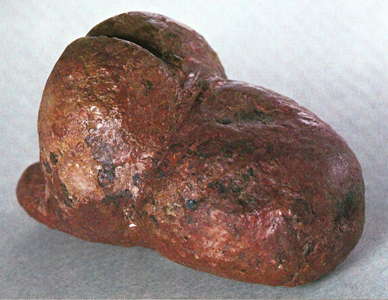 Other views of the Mauern Venus. 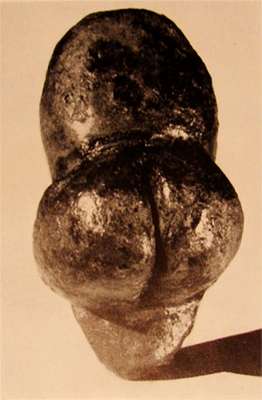 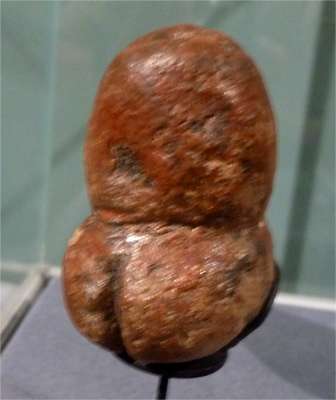 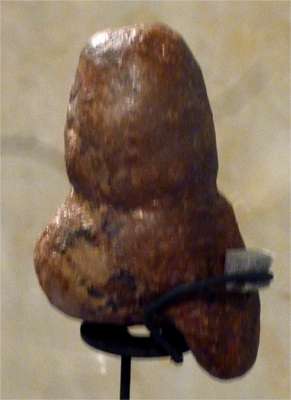 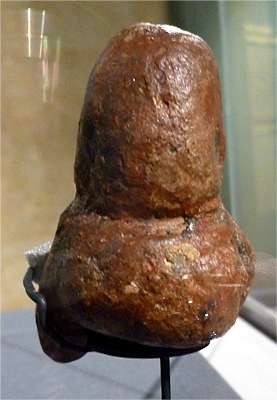 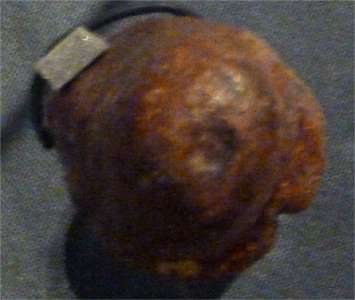 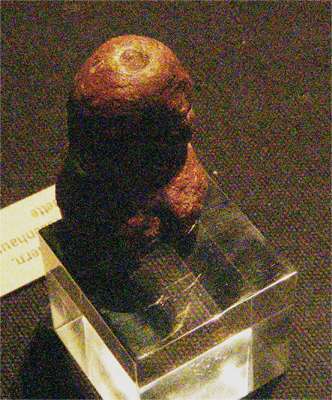 Note the depression in the head of the figure. The figure is in some ways enigmatic so far as gender is concerned, it has elements of a phallic figure, and this depression on the head is a possible pointer to its double meaning. 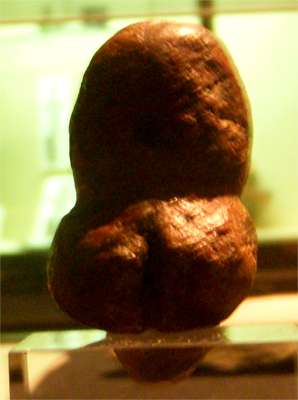 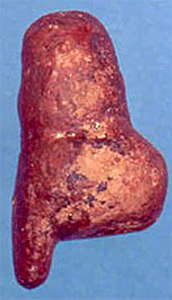 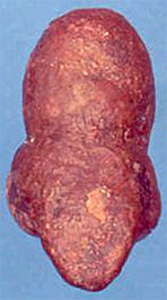 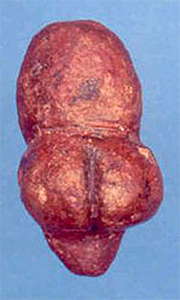 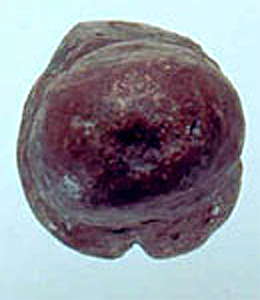 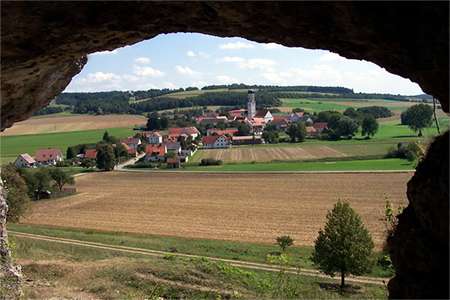 Mauern from the inside of one of the Weinberghöhlen .

From the caves there is a great view of the wide opening of the valley and of approaching prey. During the last ice age people lived in the entrances of the caves and hunted game from there.

The valley in which Mauern is situated has been mostly dry for about 130 000 years, after changes in watercourse drainage occurred.

In the south, the entrance of the Rennertshofen dry valley is very wide, while further north, the valley narrows gradually.

Just past the entrance to the valley lies the small town of Mauern with its high steeple. 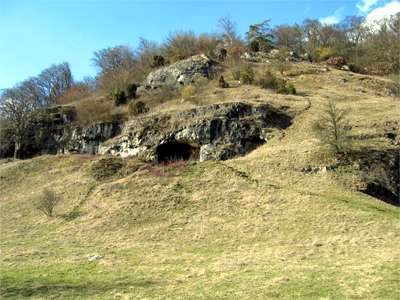 Behind the village you can see from the road in the middle of the western slopes at an altitude of 20 metres above the valley floor, the openings of the Weinberghöhlen caves.

In the ice age summers in the marshy valleys of the Jura there were too many mosquitoes, so the reindeer stayed at the glacier's edge in today's Munich. In the winter, the uplands provided good protection. Therefore in the spring and fall there were migrations of herds across the Danube to the area. 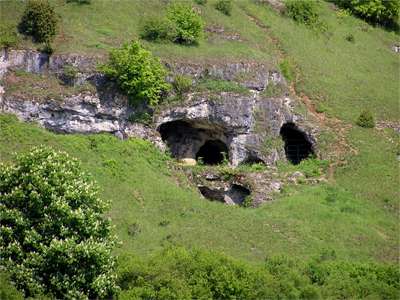 The interior of the caves is now barred, because large blocks spall from the ceiling unexpectedly. The wire mesh can be seen in this photo at the entrance to the cave on the right.

During archaeological investigations in the late 30s, most of the floor of the caves and entrances, several feet thick in places, was excavated. There was hardly anything left for the 1947-1949 follow-up excavation.

The caves are still dangerous. A large block fell unexpectedly and killed a volunteer helping to excavate the Mauern deposits. In his honour a large lime tree was planted at the entrance to the first cave.

In 1977 the Weinberghöhlen had to be barred. No one is able to enter the caves with safety.

The Lime Tree planted to commemorate the life of a volunteer excavator killed by a rock fall in the caves.

At the entrance to Cave 3, A. Bohmer in 1937/38 found the skull of a juvenile mammoth. In addition, there were several parts of the spine, ribs, shoulder blades and two front leg bone. Another 14 items included a perforated ivory pendant as well as perforated teeth of arctic fox, wolf, bear and reindeer.

A comparable group skeleton was discovered in the previous excavation close by 1937, with a follow-up showed that there were bones of various animals, which had been placed on a layer of red earth in an anatomically correct position.

Outside of the hillside cave between 2 and 3 is also during the excavation by L. Zotz in 1948/49 the statue of a woman, "Rote von Mauern" was found.

All three findings were interspersed with red ochre, which suggests that ritual and spirituality in the ice age was not uncommon.

This is one of the famous and extremely fine Blattspitzen or leaf points from Mauern which come from an Interstadial and are clearly associated with middle Paleolithic material.

The Weinberghöhlen near Mauern in Bavaria are one of the most important reference sites for the leaf points-complex in Germany. Two horizons, zone 5 and, above all, zone 4 have yielded bifacial leaf points in the context of a late Mousterian with some affinities to the Keilmessergruppen (Middle European Micoquien) during an Interstadial (Hengelo or earlier during OIS3). Because most of the leaf point-ensembles were excavated many decades ago, contextual data are not available.

Many of these artifacts are highly sophisticated and indicate an advanced level of stone knapping abilities, putatively those of Homo Neanderthaliensis. The function of leaf points is not known (Hunting spear tips, knives, prestigious objects?). 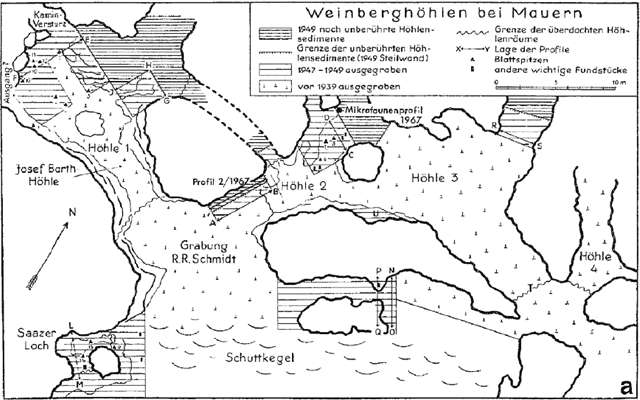 Weinberghöhlen near Mauern (Germany). Plan view of the cave system showing the few tools having been found inside the caves. After von Koenigswald et al. (1974)

The Weinberghöhlen near Mauern in Bavaria, one of the most important reference sites for the Blattspitzen complex in Germany, is especially characteristic of this group of sites. Two horizons, zone 5 and, above all, zone 4 have yielded Blattspitzen. While 609 artifacts, 89 of them tools, came from zone 5, the overlying zone 4 yielded only 398 artifacts, among them 111 tools. Cores and blanks are rare. Both horizons yielded rich faunal remains but according to Wighart von Koenigswald, there is little unambiguous evidence for hunting activities (von Koenigswald et al. 1974). A revised analysis of the fauna from Weinberghöhlen is now being undertaken by P. Krönneck in Tübingen.

It must be stressed that the highest density of finds lay in the entrance areas and the areas immediately in front of the caves, while inside the caves only isolated Blattspitzen and a few other artifacts have been found (fig. 7a). In addition, the fire places were found exclusively outside the caves (fig. 7b).

Profile C-D of the entrance area of cave 5 with fire places in the Blattspitzen layer F. After Bohmers (1951)

For the position of the profile see figure 7a above.

It should be stressed that there are strong arguments for the assumption that the richer layers in the caves, or, in many cases, in front of the caves, are simply the result of repeated short-term stays, as Hansjürgen Müller-Beck already assumed for zone 5 of the Weinberghöhlen (von Koenigswald et al. 1974).

This correlates with the fact that cores and evidence for an intensive blank production are rare, that the proportion of tools is high and that Blattspitzen are dominant among the tools, which indicates that the assemblages are related to hunting activities. Given that the areas in front of the caves had not been excavated in Mauern, the find density inside the caves themselves would show only slight differences to the caves mentioned in the third group.

Occurrence of mammalia relicts at Weinberghöhlen/Mauern