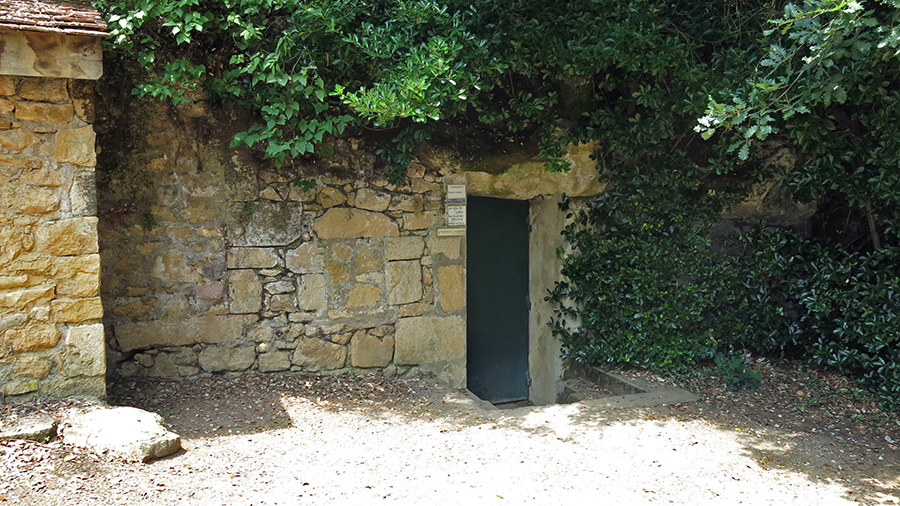 Photo: Don Hitchcock 2014
The Grottes de Cougnac caves are near Gourdon, Lot. The site consists of two caves separated by 200 metres. The first contains many concretions, some very fine, called soda straws. The second is a decorated cave from the Paleolithic. Les Grottes de Cougnac were discovered in 1952 by Lucien Gouloumès Rene Borne, Jean Mazet, Roger, Maurice Alphonse Sauvant Boudet. The cave has many prehistoric paintings dated to the upper Paleolithic. Depictions include deer, Megaloceros, the ibex, and mammoths as well as various schematic human figures, interpreted as wounded men, virtually identical to similar figures at Pech Merle. Direct dating has been carried out by the carbon 14 method on samples of carbon used for some drawings. They showed that the paintings corresponded to at least two clearly distinct phases: one around 25 000 BP (Gravettian) corresponding to the animal figures, the other during the Magdalenian, about 14 000 years before the present. 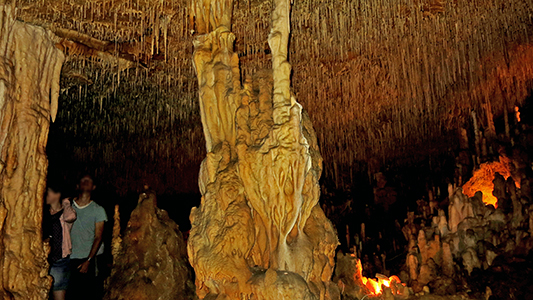 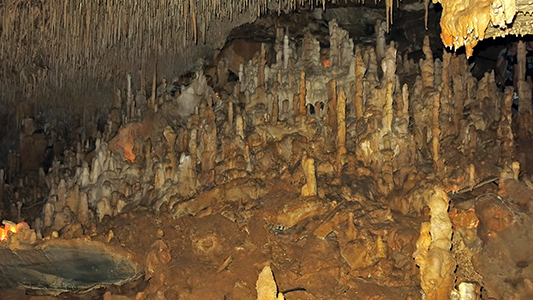 Initially, visitors are taken through the first cave of the two in the complex, one which has many concretions, including the stalactites and stalagmites shown in these images, but which is otherwise undecorated, and was never used by humans.

They then walk the short distance to the decorated cave for a tour there. 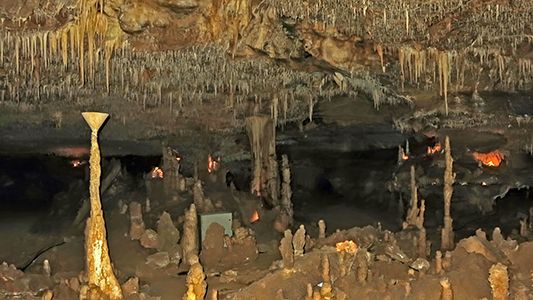 The cone on the stalagmite to the left is a light to illuminate the ceiling. 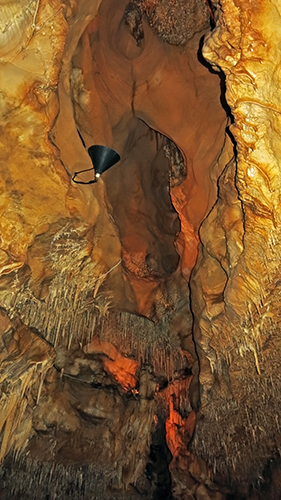 In places like this, water percolating down from the ground above has dissolved much of the limestone, leaving large 'holes' in the overall height of the ceiling.

Eventually it is likely that this will become a sinkhole. 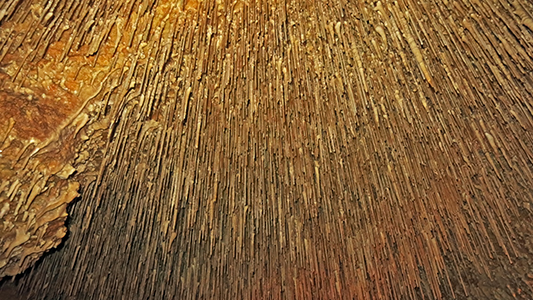 Soda straws develop when a slowly forming drop of water deposits lose carbon dioxide to the air of the cave, depositing calcite on the outside of the drop. This slowly develops into a long, hollow, translucent tube of calcite, of the same diameter as the drops of water travelling down the inside of the tube. The drops at the end of the straw give up carbon dioxide in turn, and the straw can develop into a considerable length.

They occasionally, as here, occur in very large numbers, creating a delicate and beautiful formation. 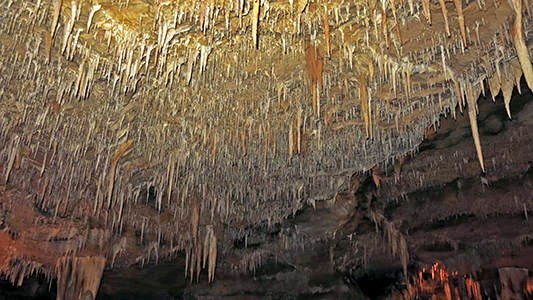 Eventually, perhaps during a dry time when the drop is not replaced quickly enough, the tube will become blocked by calcite.

The calcite rich water then travels along the outside of the straw, depositing calcite as it goes, and thickening the straw until it becomes a stalactite, as can be seen here in some instances. 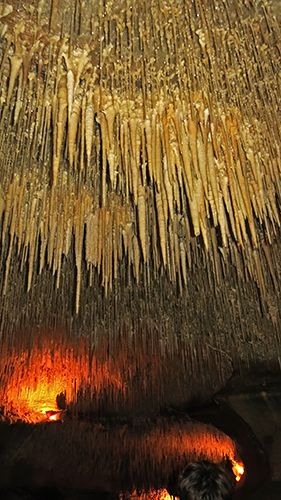 The process of a soda straw changing into a stalactite is well under way here.

As can be seen in this image, the lighting of the cave is very effective. 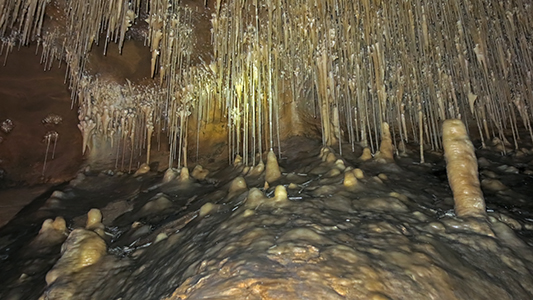 This image fortuitously illustrates a number of features in limestone caves such as this. Firstly, drops of water that fall from the ceiling or from soda straws give up their carbon dioxide on the floor of the cave, creating a film of calcite known as flowstone. This can also form on the walls of a cave.

Secondly, we can see that some soda straws have reached the floor of the cave, and have built up a thicker mound of calcite there, called a stalagmite. Stalagmites can also form simply from drops falling from the ceiling, as can be seen in the example at the right foreground.

Thirdly, we can see that several exit points of water from the ceiling appear to have combined their calcite deposits into one shape, making a star like structure on the ceiling, or close to it, which morphs into a smooth stalactite. 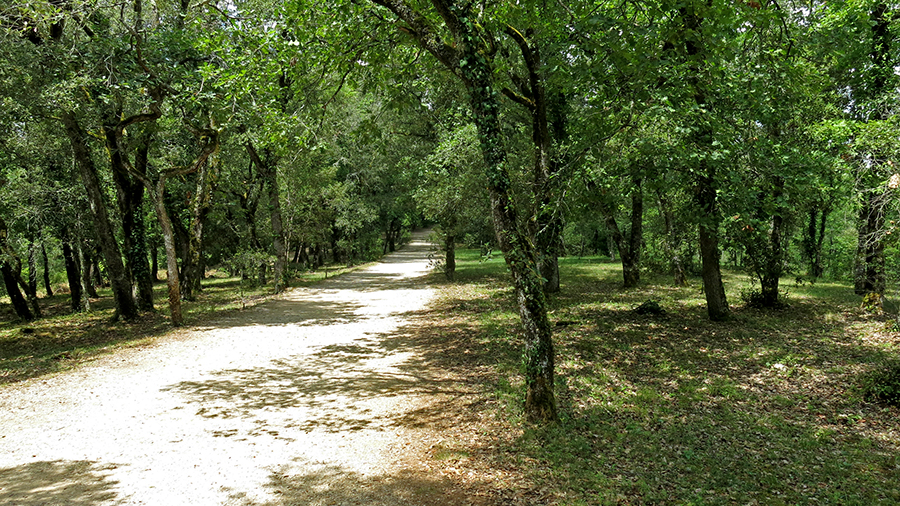 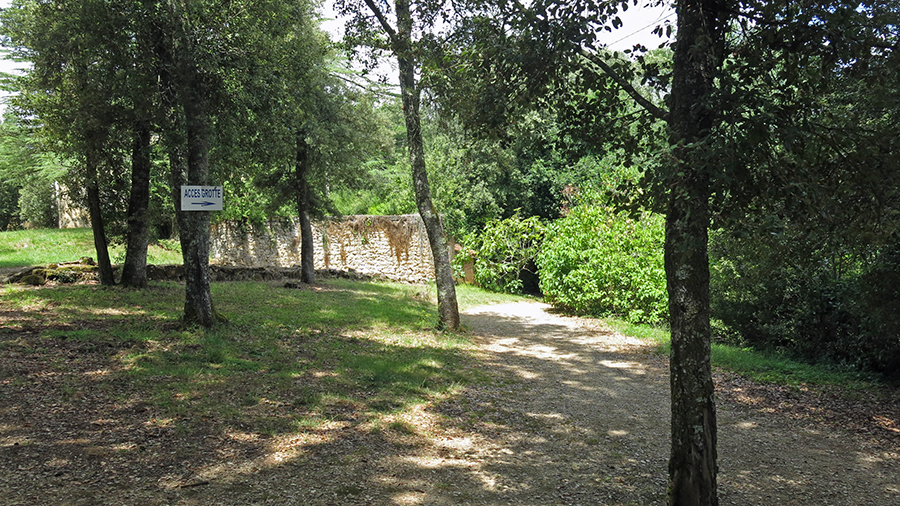 After leaving the first cave, it is a pleasant walk through a wooded area to the decorated cave. 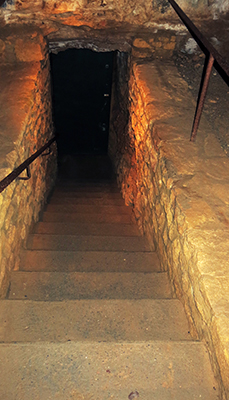 Once through the main outside door, there is a second entry to the decorated cave down a steep flight of stairs.

The Grottes de Cougnac contains images from the paleolithic. There were 60 images of animals, 50 outlines of hands, and 3 images of humans found. 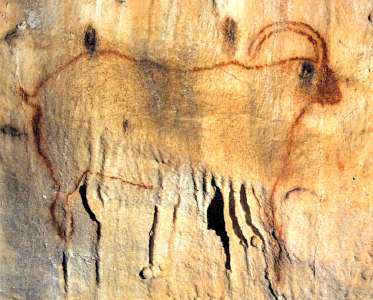 Large red ibex from the Cougnac Cave, in the Lot region.

Note the way that the placement of the ibex has been chosen so that the flowstone on the wall suggests long hair hanging from the belly of the animal.

Photo from: Agenda de la Préhistoire 2002 - 2003, a superb diary with excellent illustrations sent to me by Anya. My thanks as always. 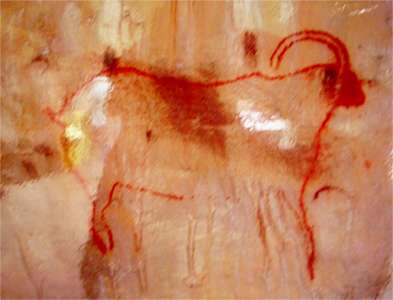