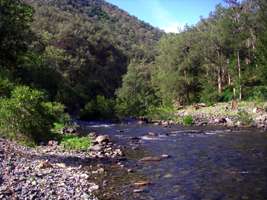 The water in the gorges east of Armidale NSW Australia, where I live, is usually clean and good to drink, though I always sterilise or boil it. I use thirty drops of twenty volume hydrogen peroxide per litre for the water I drink unboiled, and have never had any problems. I use a Visine eye wash dropper, which is convenient and light to carry, and lasts for a three day walk. I generally sterilise two 1.25 litre coke bottles each morning, drink one by lunch and drink the other during the afternoon, as well as numerous cups of coffee and tea. then make up another for the evening and early morning. I add a powdered drink called "Tang" to the water to make it easier for me to drink a lot of water. It is easy to get dehydrated, especially in summer, and plentiful safe water is essential. 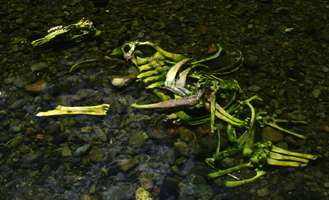 A stark reminder to sterilise all drinking water! 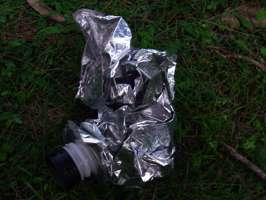 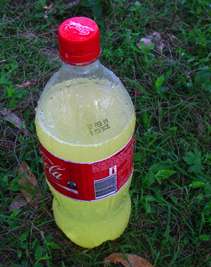 Two items I regard as essential. The five litre wine cask inner holds about six litres when full. I fill it from the creek, then carry it to the campsite, and it provides all the water I need for the evening and morning, and two full waterbottles in the morning.

Filling it is easy - the dispensing valve comes off easily, and I use a billy (can in which to boil water) to fill it from the creek. Then put the valve on so that it points diagonally to the closest corner.

Mine generally last about seven days bushwalking before they start to delaminate. This is only a problem in the sense that sometimes you cannot get all the water out of the bag when packing up for the day's walk. If it is the last day, I slash it with my sharp knife and carry it out.

The 1.25 litre coke bottles are light and superbly designed. The cap never leaks and can not be cross threaded, and the bottle has a waist which makes it easy to clamp into my bottle pocket on the side of my pack. I take a powdered cordial called "Tang" and add it to each bottle of drinking water. I came to this solution when I realised I was not getting enough drinking water during the day, especially in summer. The cordial makes getting the water down a lot easier. A side effect of using hydrogen peroxide to sterilise creek water is that the "Tang" always ends up after a couple of hours looking like lemon "Tang", even if it started out as an orange colour!