Solvieux - a large open-air site near Gabillou in the l'Isle basin.

Solvieux is a large open-air site in the middle Isle Basin. It has stratigraphical sequences from the Middle Palaeolithic to the Magdalenian. J. Sackett's excavations in this area have yielded an unknown industry in Southwestern France, between the Mousterian and the Aurignacian. This industry is characterised by the great abundance (50%) of truncated blades that J. Sackett has called 'Solvieux truncations' and by the presence of bladelets with thin retouch on the lower face. The cultural affiliation of this industry known now as the Beauronnian, is not yet solved. 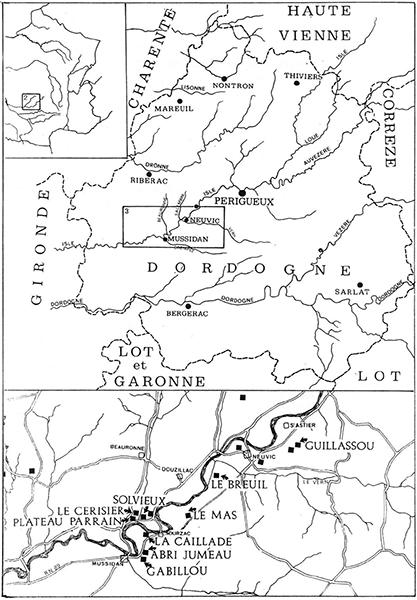 Map of the principal sites of the Upper Palaeolithic of the middle valley of the Isle River. 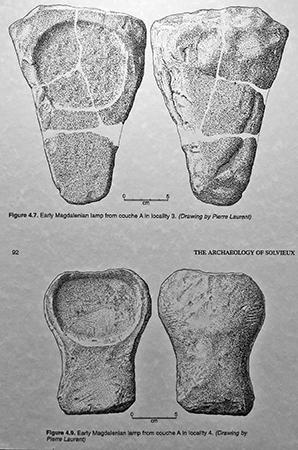 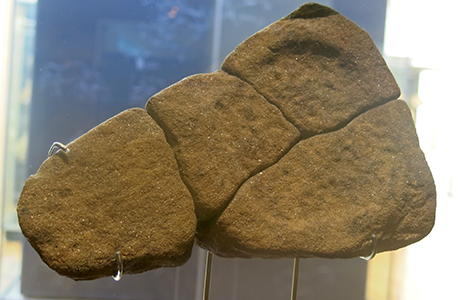 This sandstone lamp from Solvieux, broken in four pieces, shows a shallow depression for the grease and wick. It is dated to the early Magdalenian, and comes from couche A in locality 3 of Solvieux. 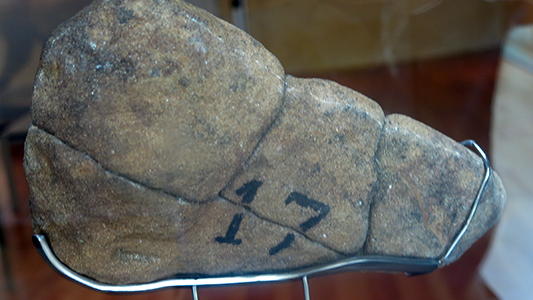 Back view of the lamp above.

Description of the lamp

This is the largest of the two lamps. It was found at the south-western end of sector 3 in a high concentration of flint on the edge of an area where the paving rockwork is very dense. It was recognised as a lamp on July 23, 1973 by Clay Singer when he washed the material in the laboratory, but its exact position had been spotted earlier, on square N 74 E 94 (lot number 213) and photographed in place on 20 July. It was at a depth of between 6.52 m (top) and 6.58 m (bottom) of depth in layer A, typical of this sector 3, in a bed corresponding to a Magdalenian occupation with raclettes which dominates this section of the site.

The lamp was lying upside down, bowl down, broken into four fragments but still in the exact position they occupied before the break. The reverse of the object not being pecked, the excavators first took this object for a paving stone, but they numbered, measured and photographed it together with other pavers in the structure before taking it to the laboratory.

C. Singer noted the presence, within one metre of the lamp, of 4 dolerite chisels. This lamp is fairly large (length 231 mm, maximum width 159 mm) and is of elongated triangular shape with rounded corners. The angle upper left may have been slightly truncated by a break. It is in light brown sandstone except in the upper left, which is reddish brown in colour.

The rock is mainly composed of relatively large grains of quartz, often of a pink colour, associated with grains of black minerals and many muscovite mica flakes. The cement of this sandstone is sparse, and does not ensure the cohesiveness of the grains which easily disintegrate at the surface, which probably explains the blunt edges and angles of the object and the erosion of the edges of breaks.

The handle is of the generally triangular shape of the lamp itself, placed in the acute angle of the triangle. Its end is clearly rounded, which, it seems, was wanted, as is the case of several other carved lamps. The obverse is fully carved but takes advantage of a natural cleavage plane of the rock. We can imagine that the artisan had chosen a sandstone block which already has a naturally flat surface, and would only have cleaned up the rim and the handle.

The bowl has been shaped by pecking and we can see clear traces of the form of small non-contiguous cupulettes giving the surface a bumpy appearance. The sides of the bowl are oblique. The reverse is quite irregular. It may not have been formed, but only somewhat regularised. We observed no trace of picketing or scraping, but we must consider the alteration of surface rock and the fact that, on the site, the object was found upside down. The surface is, however, very rough, with troughs and ridges, particularly along the rock cleavage lines. The thickness at the bowl is greater than at the handle.

The sides of the object have certainly been shaped to create its triangular shape. It seems likely that it was not broken during its creation, but was broken after it was abandoned, as is evidenced by the perfect connection of the four fragments at the site. Perhaps the weight of the sediments above it, or being trampled as it lay on the ground would have been sufficient to break the lamp, which was a large object executed in a material having little innate cohesion. 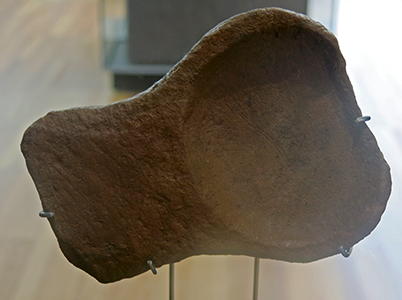 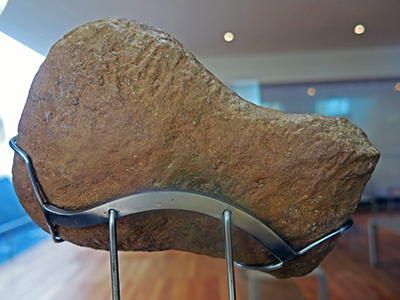 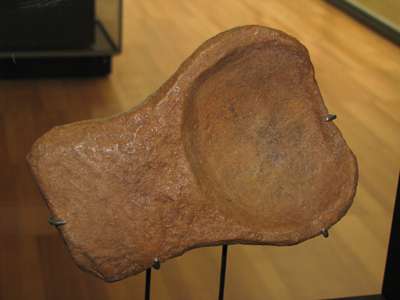 This early Magdalenian lamp is from Couche A, locality 4 of Solvieux.

This second lamp, also in sandstone, is whole, not fragmented. It comes from sector 4 and squares N86 / E90 (lot number 230), and was found 13 metres northwest of the other lamp, that is to say closer to the line of rock bordering the site to the north. It was found on 19th July, 1973 by William Breece and was first identified as a palette. A photograph was taken in situ. The lamp was found bowl down, but was immediately recognised as a manufactured artefact.

It has been carved from thin brown sandstone. The material is very porous and fragile, and might be better described as hardened sandy clay rather than sandstone. There were scattered muscovite mica flakes in the matrix. Fortunately the object was not washed, which would have degraded this soft and crumbly rock. This lamp has been entirely shaped on both the obverse and reverse. Despite the fragility of the material, it is almost intact, and only a portion of the rim is missing.

The overall shape does not fit in a simple geometric figure, but consists of an oval dish combined with an almost square handle. The large diameter cup is transverse to the axis of the object. The sides are oblique, fairly well defined with respect to the concave bottom of the bowl (there is break in slope between the sides and bottom). The margin, 6 to 9 mm wide, is flat over the entire circumference, except for the degraded edge. On the front, the surface of the lamp is flat, level with the plane of the rim. The reverse of the object is convex, with a regular curvature at the cup, but there are three convex smoothed edges under the handle.

Traces of carving are clearly visible on the surface. On the obverse of the handle, there are traces of coarse pecking and oblique marks, probably smoothing. The bowl is finely fashioned and polished, but there are some parallel and meandering scratches on the surface. These may be due to the cleaning of combustion residue. 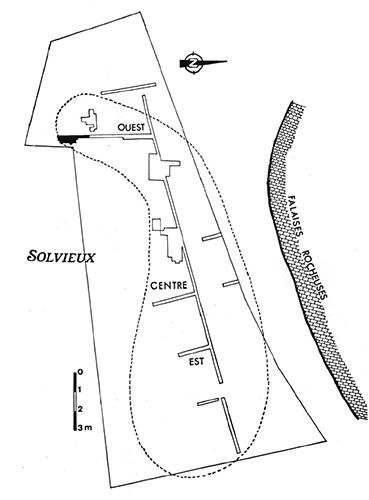 Solvieux, general plan of the excavations. 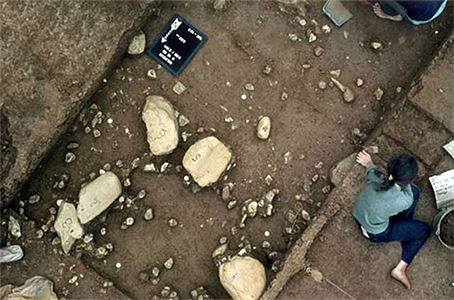 Solvieux, photo of the excavations in progress. 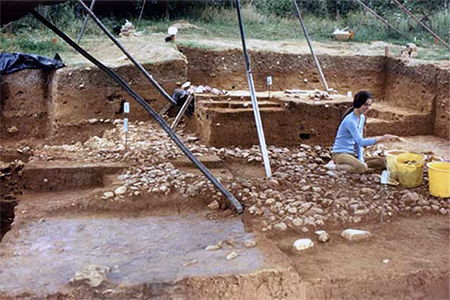 Solvieux, photo of the excavations in progress.

Engraved stone from Solvieux, Saint Louis sur l'Isle. This was found during the excavations by J. Sackett. 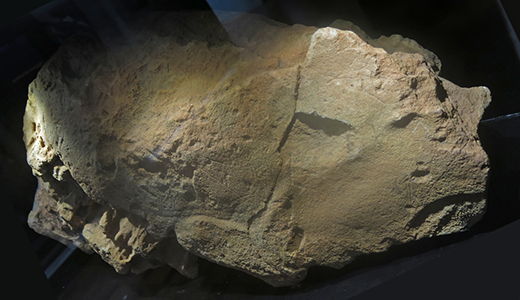 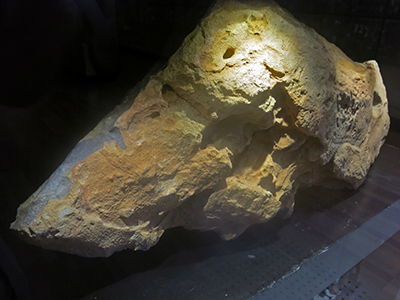 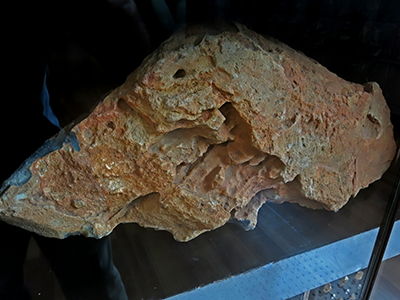 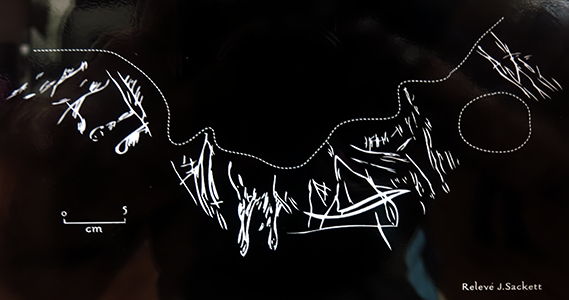 Drawing of the engravings on the stone from Solvieux. 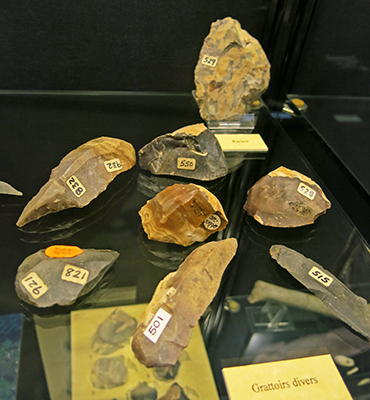 Various scrapers, called here grattoirs. Grattoirs are stone scrapers made by retouching a flake or a blade, usually Upper Paleolithic, retouched at the end and used probably for working wood or cleaning hides.

The tools labelled 528, 550 and 'core scraper?' look like Rabots, heavy 'push-plane' scrapers made on blocks or thick flakes, abruptly retouched.

At the back is a racloir, labelled 529. Racloirs are large side scrapers created from flint flakes. As well as being used for scraping hides, they may also have been used as knives. 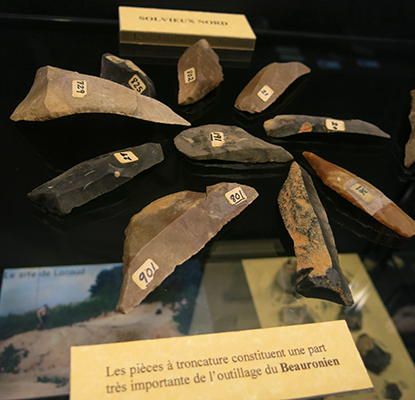 Truncated pieces such as these constitute a very important part of the Beauronien toolkit. 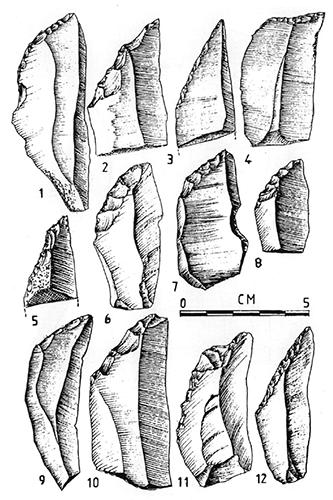 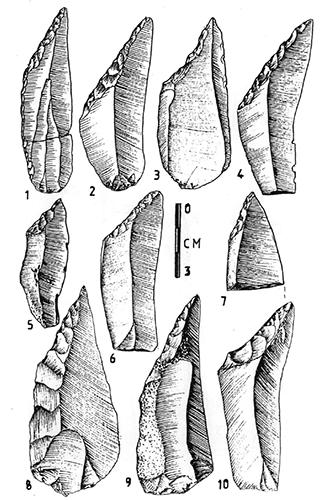 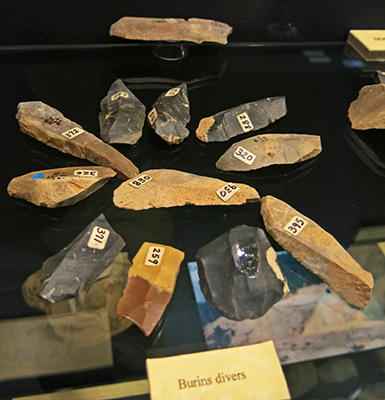 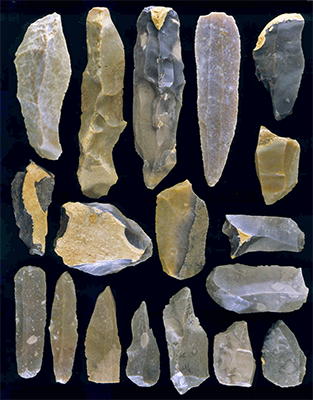 The artefacts in this picture represent several different types of flakes and tools belonging to the Aurignacian stone tool industry.

There are utilized core blades, two crested blades, end scrapers, side scrapers and burins. Most of these artefacts were made from either complete or broken pieces of core blades. 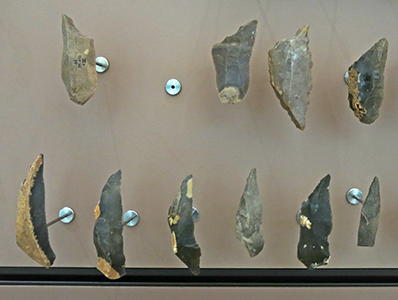 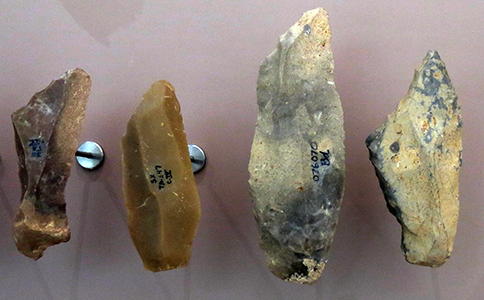 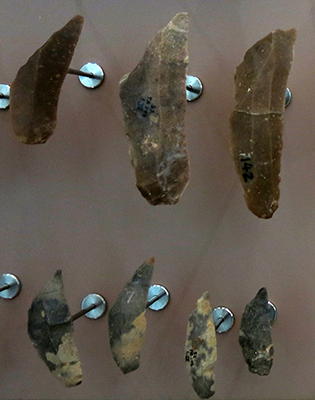 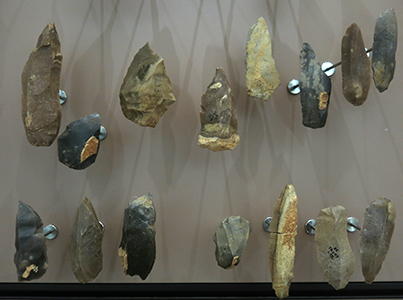 Solvieux tools, mostly burins, with some scrapers on the lower right of the right hand image.

This collection includes a drill in the right hand image, third from the left in the top row. 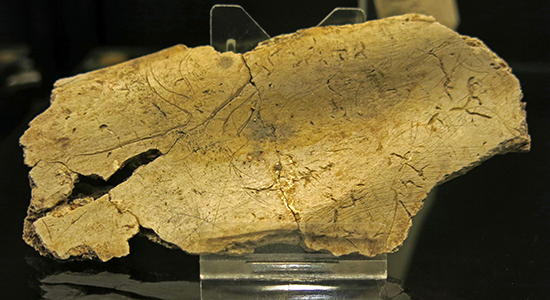 Engraving of a bovid and reindeer from Solvieux. 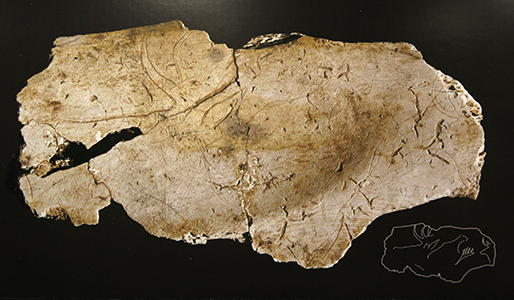 Poster showing the engraving and a diagram.

These are puzzling artefacts from Solvieux. They are pebbles that have been polished - but how?

The only method I can think of is that the creator put them in a leather bag with powdered haematite, the red ochre often used in the Palaeolithic, and now called jeweller's rouge, and walked around with them on their belt all day, every day, for months or years, the constant jiggling in the presence of haematite polishing them to this high lustre.