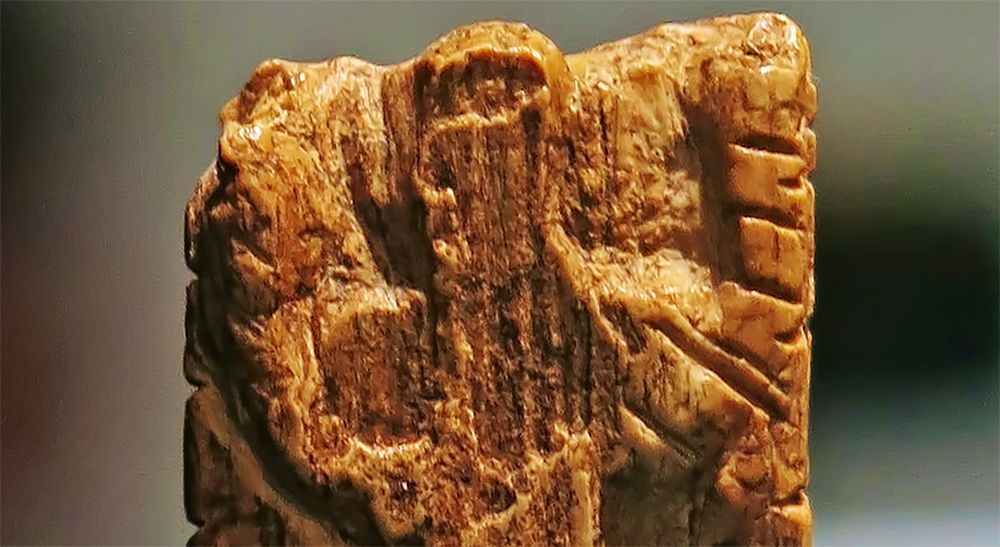 The Worshipper, called 'Adorant', is one of the oldest, most impressive and mystifying statuettes from the Ice Age. It was discovered in an ashy bone layer near a possible hearth. Unfortunately, the surface of this small flat segment of ivory is in very poor condition. Nevertheless, the bas-relief of a human being with raised arms, who seems to be either saluting or threatening, can be distinguished. The raised arms might also be interpreted as an attitude of worship, so the statuette was named the 'Adorant'.

The figure stands erect with legs apart and a tail-like extension down between its legs. It may depict a hybrid creature similar to the Lion-Man from the Hohlenstein-Stadel cave. We know of more such dual characters from French cave paintings. Rows of dots were cut on the back of this flat piece, possibly referring to simple astronomical observations. In addition, traces of manganese and red ochre (ferric oxide) were found on the back. Lines were cut into the sides as well as on one of the arms. 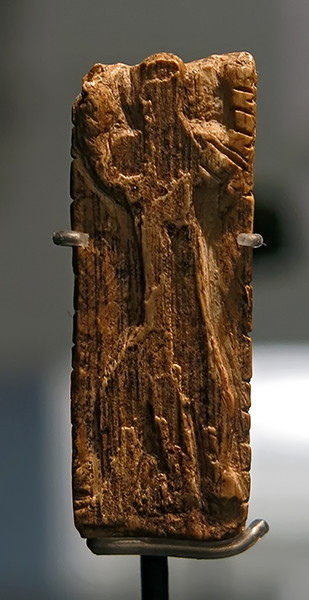 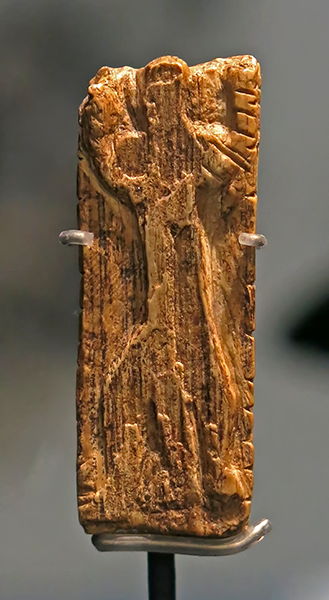 The figure known as the 'Adorant' stands erect with legs apart and a tail-like extension down between its legs. It may depict a hybrid creature similar to the Lion-Man from the Hohlenstein-Stadel cave. We know of more such dual characters from the French cave paintings.

Rows of dots were cut on the back of this flat piece, possibly referring to simple astronomical observations. In addition, traces of manganese and red ochre (ferric oxide) were found on the back. Lines were cut into the sides as well as on one of the arms.

Site: Geißenklösterle, Blaubeuren. The original carving is in the Württemberg Landesmuseum, Stuttgart. 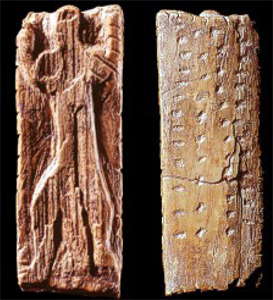 The two sides of the Geißenklösterle ivory plate. Based on an image from the Landesmuseum Württemberg, Stuttgart

Another version of the Adorant.


The Decorated Plate of the Geißenklösterle, Germany

The cave of Geißenklösterle is situated near to the village of Weiler in the Ach valley, close to the town of Blaubeuren in the Blau valley, region of Alb-Donau, Baden-Württemberg, Germany.
Location: Latitude 48º 23´ 53˝ N, longitude 9º 46´ 17˝ E. Elevation 580m above mean sea level.

General description: The cave of Geißenklösterle is situated at the Bruckfels rocks, c. 60m above the present floor of the Ach valley, which is part of the widespread drainage basin of the Proto-Danube river system and a pronounced karst area. The Geißenklösterle is a vestige of a once much more widespread cave system, which had already collapsed long before the first human occupation, in the Middle Palaeolithic (Mousterian) epochs. The remains of a large rock cavern including a rock arch are visible today. The Upper Palaeolithic archaeological strata yielded several works of figurative art: half reliefs of a bison and an anthropoid, and full reliefs of a mammoth and a bear, all made of mammoth ivory; two fragments of sculptures, possibly of animals; and a painted fragment of limestone.

Inventory of the remains: A small rectangular plate made of mammoth ivory, measuring just 38 mm × 14.1 mm × 4.5 mm, was excavated in 1979. Its archaeological context indicates a date within the Aurignacian, probably 35,000–32,000 BP. The artist cut, smoothed and carved one side (A) and finely notched the other side (B) and the edges. Side A contains the half-relief of an anthropoidal figure, either human or a human-feline hybrid, known as the ‘adorant’ because its arms are raised as if in an act of worship. On side B together with the four edges is a series of notches that are clearly set in an intentional pattern. The edges contain a total of 39 notches in groups of 6, 13, 7 and 13. A further 49 notches on side B are arranged in four vertical lines of 13, 10, 12 and 13 respectively plus a further notch that could be in either of the middle two lines.

History of the site: Excavations took place at Geißenklösterle between 1973 and 1991 and have continued since 2001. The archaeological layers contained well-preserved materials from the Mesolithic back to the Upper Palaeolithic (Magdalenian, Gravettian and Aurignacian periods), but earlier, Middle Palaeolithic artefacts were found to have been damaged by soil liquefaction. The ivory plate itself was excavated in 1979.

Cultural and symbolic dimension: The grouping of the notches on the plate suggests a timerelated sequence. The total number of notches (88) not only coincides with the number of days in 3 lunations (88.5) but also approximately with the number of days when the star Betelgeuse (Orion) disappeared from view each year between its heliacal set (about 14 days before the spring equinox around 33,000 BP) and its heliacal rise (approximately 19 days before the summer solstice). Conversely, the nine-month period when Orion was visible in the sky approximately matched the duration of human pregnancy, and the timing of the heliacal rise in early summer would have facilitated a ‘rule of thumb’ whereby, by timing conception close to the reappearance of the constellation, it could be ensured that a birth would take place after the severe winter half-year, but leaving enough time for sufficient nutrition of the baby before the beginning of the next winter. There is a resemblance between the anthropoid on side A and the constellation Orion. 20 ICOMOS–IAU Thematic Study on Astronomical Heritage

None of these factors is convincing when taken in isolation, because of the high probability that apparently significant structural and numerical coincidences might have arisen fortuitously. However, taken together they suggest that the anthropoid represented an asterism equivalent to today’s constellation of Orion, and that the ivory plate as a whole related to a system of time reckoning linked to the moon and to human pregnancy. If so, then ethnographic comparisons would suggest that the Geißenklösterle culture related their ‘anthropoid’ asterism to perceived cycles of cosmic power and fertility. Comparative Analysis: The Geißenklösterle ivory plate is an exceptional artwork illustrating the highly developed cognitive and aesthetic abilities of early Upper Palaeolithic cultures. It is, to date, the oldest identifiable visualization of an asterism combined with denotations relating to time reckoning according to the moon and to the human pregnancy period. It also provides a clue to the kind of mythical conception that underlay these ideas and practices.

Authenticity and integrity: The plate was discovered in situ in 1979 in an original dwelling layer, beneath a 5cm-thick bone-ash stratum, unburned and close to a concentration of tools and other artwork—probably near to a fireplace. The layer was sealed by a collapse of the ceiling. The object had been shifted a small amount (by a few cm) from its original position by movements of the soil. The fact that the sculpture is complete and the fact that notches exist on all the edges prove that the small plate is complete and not a part of a larger object.

Side B contains tiny spots of manganese and ochre, which must have been applied intentionally. Apart from a small repair to a tiny part of side B that had chipped away, no restoration work has been carried out on the plate.

Present management of the object

Present use: The original object is accessible only for scientific examination. There are replicas available for public display and private ownership.

State of conservation: The object is generally well preserved. Most of the surface of the figure on side A is only weathered from its original use, although during the excavation a tiny piece (ca 1mm) of the left upper corner was broken off. The uppermost thin ivory lamination on this side was also slightly damaged during the excavation. A tiny part of side B was chipped off, and has been restored.

Context and environment: The nature of the original weathering indicates that the piece may have been carried in a bag. The embedding of the object in a layer spotted with ochre, a mineral often used during Palaeolithic rituals, emphasises the importance of the bas-relief for the original owner.

Archaeological/historical/heritage research: The plate has been examined and described in detail on several occasions since its discovery.

Main threats or potential threats to the site: The object is well and safely preserved.

Management: The original plate is only shown to the public in very rare cases. Replicas of it are displayed at several museums around the world.