The development of the tusks and of the trunk reflects the evolution of the mastodons during the Miocene, which lasted from 23 million years ago to 5 million years BP (before the present).

Text above: Adapted from the display at the Vienna Natural History Museum

The genus Mastodon, (from the Greek Mastos, meaning breast, and odon: tooth, referring to the the nipple-shaped protrusions on the crowns of its molars) belongs to the family Mammutidae, which is a family within the mammal order Proboscidea. Although Mastodons share their ancestor, Palaeomastodon, with the elephants and mammoths they remain a side line of their own.

7 million years ago the Mastodons spread to north America, and later to south America. The mastodons were about the same size as the elephants and the mammoths, but more muscled, and most species had fur. The upper jaw had two big tusks, the lower jaw had two smaller tusks. Mastodons had never more than two molars in the jaw at the same time. 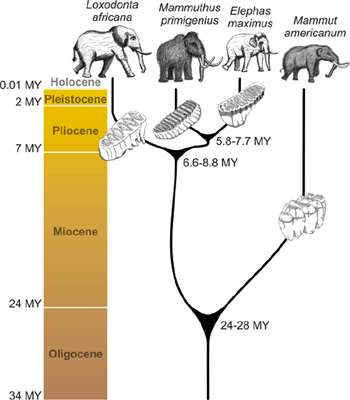 The lineage shown in the diagram at left was determined from sequencing the mitochondrial genome of the mastodon Mammut americanum, a recently extinct relative of the living elephants that diverged about 26 million years ago. The sequence was obtained from a tooth dated to 50 000ŌĆō130 000 years ago, increasing the specimen age for which such palaeogenomic analyses have been done by almost a complete glacial cycle.

These dates are strikingly similar to the divergence time for humans, chimpanzees, and gorillas, and raise the possibility that the speciation of mammoth and elephants and of humans and African great apes had a common cause. Despite the similarity in divergence times, the substitution rate within primates is more than twice as high as in proboscideans.

The Phylogenetic trees shown below are the simplest and best form of such trees that I have ever seen. They give a clear and logical graphical representation of the relationships of organisms that is very easy to understand and easy to code for a website as a table.

The author calls them ' boxograms '.

The trees below come from:


Table or 'boxogram' above redrawn by Don Hitchcock 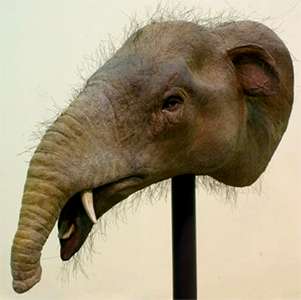 This is a superb reconstruction of Phiomia by Blue Rhino Studio, who do hyper-realistic reconstructions of extinct or living animals for major museums such as the Field Museum.

Phiomia is one of the Elephantiformes, as per the first table above. 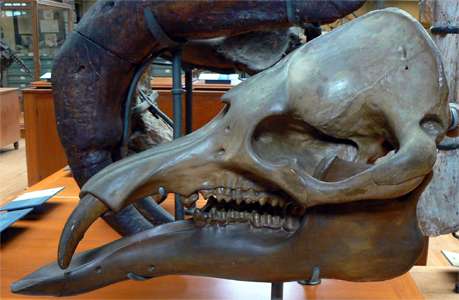 Phiomia is an extinct genus of basal proboscid that lived in what is now Northern Africa during the Late Eocene to Early Oligocene some 36-35 million years ago. "Phiomia serridens" means "saw-toothed animal of Faiyum". Faiyum is in Egypt, 130 km southwest of Cairo.

Phiomia was around 2.5 metres (8.2 ft) high, and vaguely resembled a modern elephant, although, based on the shape of its nasal bones, it had only a very short trunk. It had short tusks on the upper jaw and also short shovel-like tusks on the lower jaw that were most likely used for gathering food. These were similar to those of the Miocene Platybelodon, Archaeobelodon, and Amebelodon, but considerably smaller. The tusks in the upper jaw may have been used in defence, or scraping bark off trees. 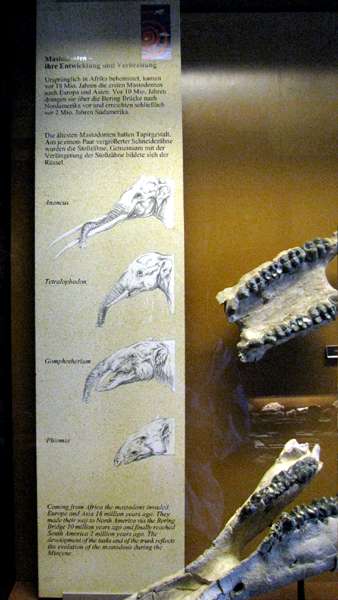 The development of the tusks and of the trunk reflects the evolution of the mastodons during the Miocene. 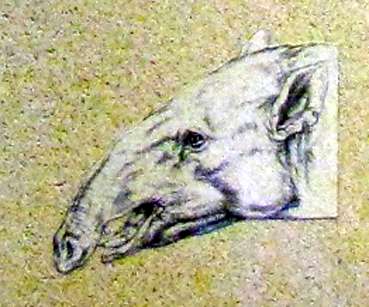 One version of what Phiomia looked like, with a small trunk, and not showing tusks. 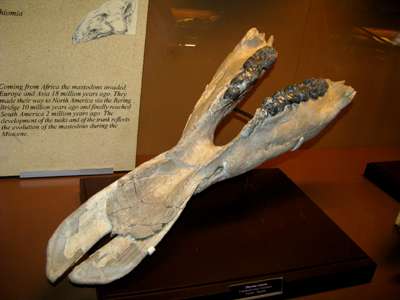 Note the shovel-like appearance of the tusks, possibly used to dig up roots and tubers. 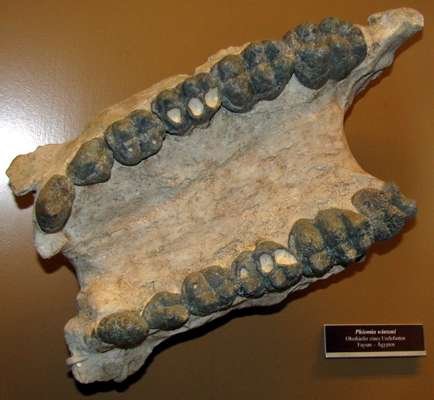 Upper jaw of the same species of mastodon, also from Faiyum, Egypt. 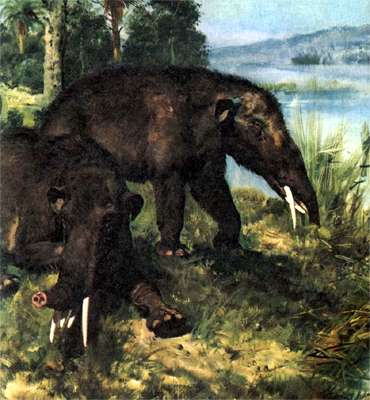 Originally recognised only in his native Czechoslovakia, Burian's fame later spread to an international audience, and a number of artists later attempted to emulate his style. He is regarded by many as the most influential palaeo-artist of the modern era. 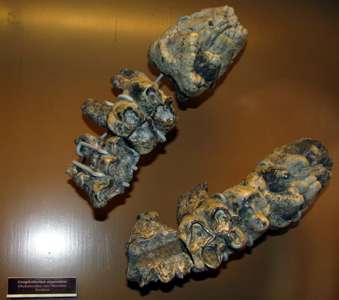 Teeth of the upper jaw of a mastodon, from Dornbach, Austria 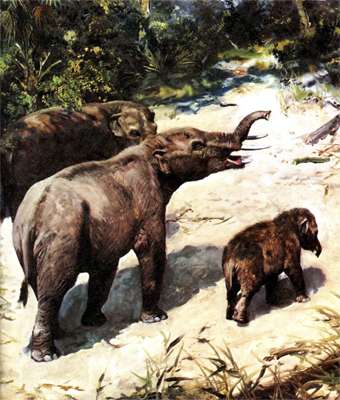 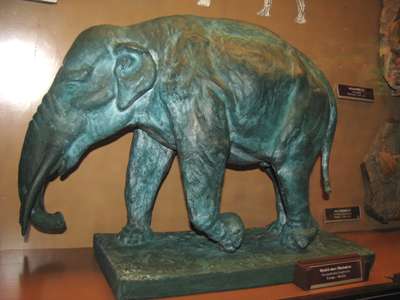 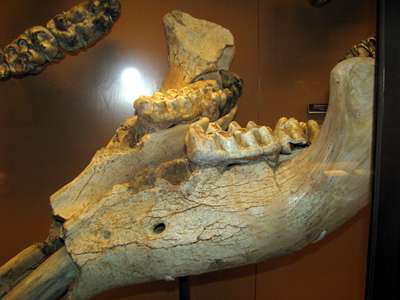 It is from the late Miocene-Pliocene (3-2 million years ago) and was about 8 feet (2.5 metres) high and one ton in weight.

It had four tusks and large, four-cusped teeth.

The "tetra" in Tetralophodon refers to this prehistoric elephant's unusually large, four-cusped cheek teeth, but it could apply equally well to Tetralophodon's four tusks, which mark it as a "gomphothere" proboscid (and thus a close relative of the better-known Gomphotherium).

Like Gomphotherium, Tetralophodon enjoyed an unusually wide distribution during the late Miocene and early Pliocene epochs; fossils of various species have been found as far afield as North and South America, Africa and Eurasia.

Text: Adapted from Wikipedia and http://dinosaurs.about.com/ 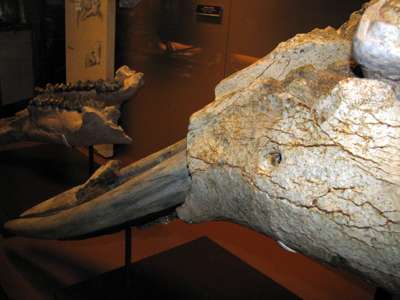 This genus of animals stood about ten feet tall and was a very widespread and successful proboscidean. Tetralophodon lived through the Miocene and Pliocene epoches. These animals have been found in North America, Europe, Asia, and Africa. 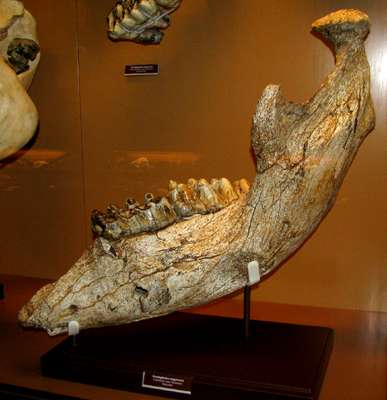 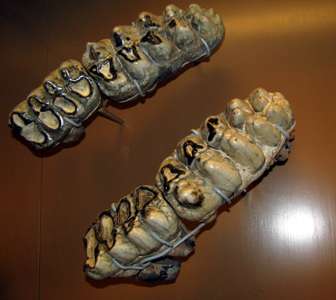 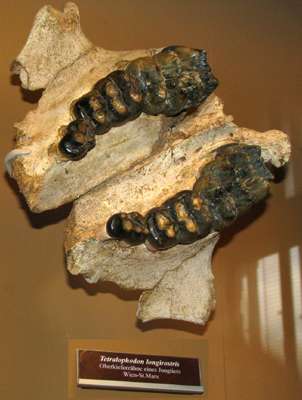 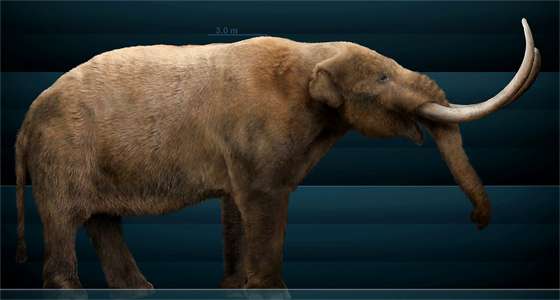 A superb reconstruction based on the available fossils. 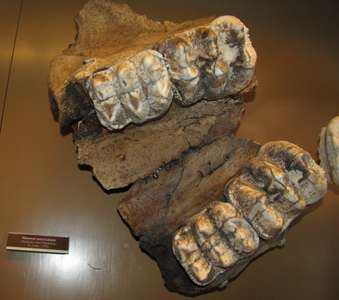 Upper jaw of a mastodon from St. Louis USA

The American mastodon, Mammut americanum, is an extinct North American proboscidean that lived from about 3.7 million years ago until about 10 000 BC. It was the last surviving member of the mastodon family. 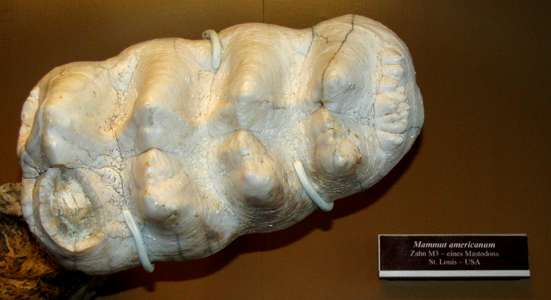 Third Molar of a mastodon from St. Louis USA 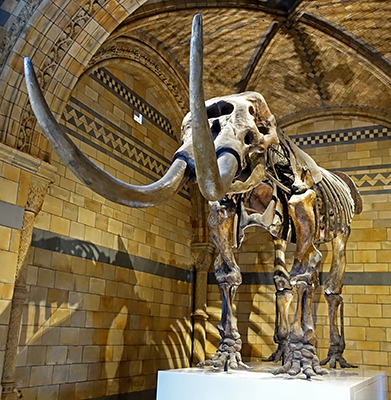 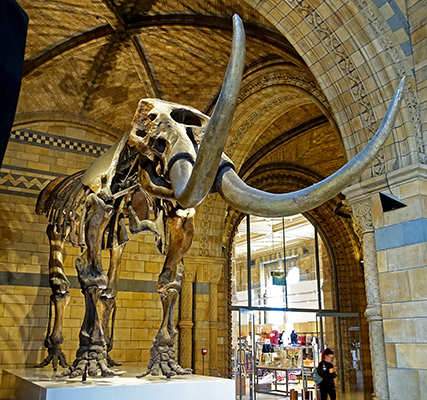 This Ice Age relative of the elephant roamed North America until 13 000 BP.

These magnificent beasts co-existed with humans until they were eventually driven to extinction by a combination of hunting, habitat loss and climate change.

This specimen was originally toured by an American entrepreneur as an 'aquatic monster', with added vertebrae and horizontal tusks.

Acquired by the Museum in 1844, Sir Richard Owen, the first Director of the NHMUK, repositioned the mastodon into its current, accurate position, revealing its relationship to living elephants.

It is known from fossils found ranging from present-day Alaska and New England in the north, to Florida, southern California, and as far south as Honduras and El Salvador. Its main habitat was cold spruce woodlands, and it is believed to have browsed in herds. 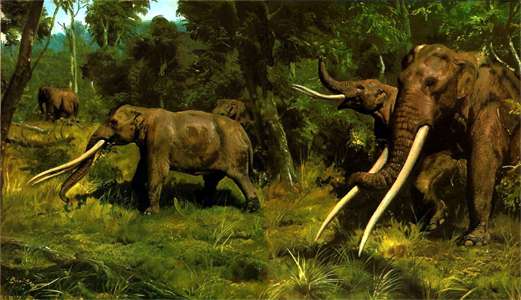 First described from the middle Pliocene of Puy-de-Dome, Perrier (France) as Mastodon arvernensis (or Mastodon from Auvergne) by Croizet et al. (1828) from a fragment of a lower jaw and two milk premolars.

Fossil remains of various members of the genus Anancus are known from the Late Miocene - Middle Pliocene of India and China, and from the Pliocene, early Pliocene and early Pleistocene of North, Central, Eastern and Southern Africa, and form the Middle to Late Pliocene, from a number of countries south of the former Soviet Union (Moldova, Ukraine, North Caucasus and Transcaucasia, Kazakhstan).

(The text above translated from http://age-of-mammals.ucoz.ru/index/anancus/0-242) 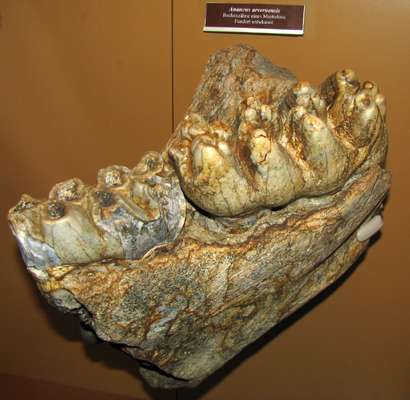 Molar of a mastodon, locality unknown. 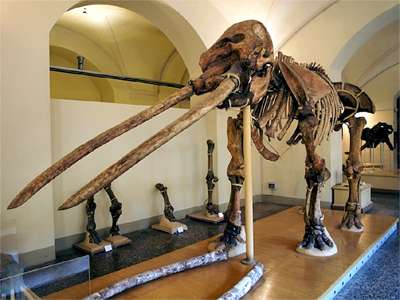 Anancus arvernensis, known as 'Pippo' discovered in 1825 near Montecarlo in Tuscany (Italy)

Standing around 3 m (9.8 ft) tall and weighing about 5 tons, it closely resembled a modern elephant. It had two tusks, whereas most other gomphotheres had four. Aside from its somewhat shorter legs, Anancus was also different from modern elephants in that its tusks were much longer, up to 4 m (13 ft) in length. The molars were not composed of lamellae like those of true elephants, but had cusps, like tapir and pig molars. Anancus appears to have lived in forests, eating from trees and shrubs and digging out tubers and roots in the forest floor, and it died out when these forests gave way to grasslands. 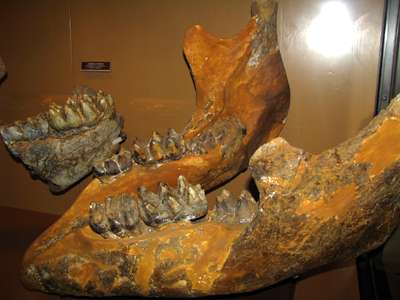 Lower jaw of a mastodon, found at Wolkersdorf. It is closely related to the Mammut genus. 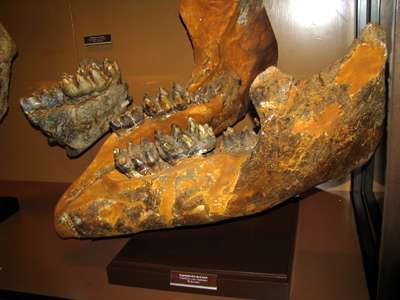 Wolkersdorf im Weinviertel is a town in the district of Mistelbach in the Austrian state of Lower Austria. It is situated in the Weinviertel, about 15 km north of Vienna, on the main road from Vienna to Brno.

The Manis Mastodon - A newly analysed mastodon rib bone shows that Native Americans were using bone-pointed weapons to take down big game nearly a thousand years earlier than thought, according to a new study. Images of the rib show a broken bone projectile point still stuck where a hunter drove it in 13 800 years ago. The rib was found near the town of Sequim on WashingtonŌĆÖs Olympic Peninsula, in the late 1970s. Radiocarbon analysis, DNA samples, genetics work, and other modern techniques recently revealed its true age.