Heat treatment of flint very often makes it much easier to work. Longer, thinner flakes can often be struck from the core, and the stone becomes more glassy, with a greasy look to the conchoidal surfaces left after a flake has been struck.

Text below is an adaptation of the paper by Frank L. Cowan

The original paper may be seen at http://wings.buffalo.edu/anthropology/Lithics/Files/thermal.pdf

Photo of conchoidal fracture in quartz from:
http://dn.redwoods.edu/coursenotes/renner/geo_images/rocks_minerals/minerals/conchoidal-fracture.jpg

Several researchers have used scanning electron microscopy to determine the effect of heat treatment on cherts, a variety of microcrystalline quartz.

The heat treatment appears to fuse the crystals together, which means that when a flint is knapped, the flint acts more like glass than a crystalline substance, giving much sharper surfaces.

Heat treatment results in a small weight loss probably due to loss of water from the chert.

In most cherts and other microcrystalline quartz such as flint, successful heat treatment involves raising the temperature of the stone to at least 275°C, and maintaining that temperature for several hours. Some varieties need to be taken to 450 - 500 °C, others only need 350 - 400°C.

The maximum temperature for successful heat treatment is firmly fixed at 573°C because of the crystalline properties of quartz.

If the flint is heated rapidly, it will explode because of moisture trapped in the flint, and too rapid cooling will spoil the stone by crazing fractures.

Once the method is understood and worked out for a particular type of flint or chert, failures are rare.

Fire As an Engineering Tool of Early Modern Humans


Abstract:
The controlled use of fire was a breakthrough adaptation in human evolution. It first provided heat and light and later allowed the physical properties of materials to be manipulated for the production of ceramics and metals. The analysis of tools at multiple sites shows that the source stone materials were systematically manipulated with fire to improve their flaking properties. Heat treatment predominates among silcrete tools at ~72 thousand years ago (ka) and appears as early as 164 ka at Pinnacle Point, on the south coast of South Africa. Heat treatment demands a sophisticated knowledge of fire and an elevated cognitive ability and appears at roughly the same time as widespread evidence for symbolic behavior.

The authors found that the silcretes available at the site in South Africa were difficult to flake consistently into formal tools without heat treatment. In Australia, indigenous peoples have used heat treatment on silcretes until relatively recently in the Kimberley region of northern Australia.

Silcrete responds to heat treatment with significant improvement in workability and has a greater tolerance for high temperatures than do chert and flint. Following this lead, the authors found that heated South African silcrete is significantly more workable than unheated materials, and both bladelets and bifaces are easier to flake, with higher success rates. This transformation in workability was remarkably obvious when flaking both heated and unheated silcrete from the same source.

They collected silcrete samples from sources located within 100 km of Pinnacle Point. Experimental silcrete samples were slowly heated to ~350°C in a scientific furnace or in sand beneath a fire pit.

Using heated silcrete biface blanks, they found that they could produce a significantly thinner biface that maximized cutting edge, in the same amount of time needed to work the unheated bifaces. The heated biface samples closely resembled those of the actual Still Bay point specimens. 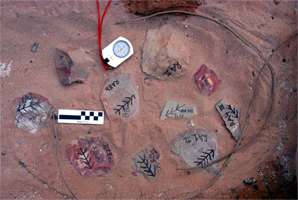 Fire pit and sand both used for heat treatment experiments. Silcrete is placed beneath a layer of sand and then a fire is built over the top. The temperature is gradually increased and then slowly decreased to avoid cracking the stone. Credit: © Science/AAAS

They concluded that all of the tested archaeological samples some areas had been heated, and that most samples had a single heating component with maximum temperatures between 300° to 400°C. This is a typical temperature range for anthropogenically burnt rocks and hearth stones from modern and South African prehistoric sites.

Heat treatment provides the option of exploiting more local but poorer raw materials and compensating by improving their quality, but may only be worthwhile if there is abundant fuel.

Starting around ~71 000 BP in South Africa, there is recurrent evidence for early symbolic behavior and complex technologies that predate their occurrence outside Africa. The results of the authors of this study show that at this same time, early modern humans regularly used heat treatment to increase the quality and efficiency of their stone tool manufacture process.

This technology required in these early humans a novel association between fire, its heat, and a structural change in stone with consequent flaking benefits that may signal a complex cognition. Their gloss analysis of some of the lithics suggests that this technology may have originated by 164 000 BP. 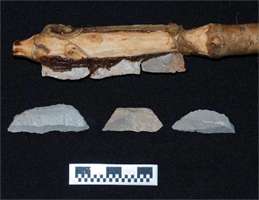 Experimentally replicated blade tools produced with heat treated silcrete. Some of these tools may have been mounted unto a wood handle to create a tool with disposable blades, as pictured above. Credit: © Science/AAAS

Heat-treatment technology in Africa may explain the presence of advanced tools in the African Middle Stone Age and their rarity in the Eurasian Middle Paleolithic, where Neanderthals predominated. As these early modern humans moved into Eurasia, the ability to alter and improve available raw materials and increase the quality and efficiency of stone tool manufacture may have been a behavioural advantage.

Early modern humans use fire to engineer tools from stone


In commentaries about this paper, this article from http://esciencenews.com/articles/2009/08/13/early.modern.humans.use.fire.engineer.tools.stone was very interesting:

"Our illumination of the heat treatment process shows that these early modern humans commanded fire in a nuanced and sophisticated manner," says lead author Kyle Brown, a doctoral candidate at the University of Cape Town, and field and lab director in Mossel Bay, South Africa, for ASU's Institute of Human Origins.

"We show that early modern humans at 72,000 years ago, and perhaps as early as 164,000 years ago in coastal South Africa, were using carefully controlled hearths in a complex process to heat stone and change its properties, the process known as heat treatment," explains Brown. 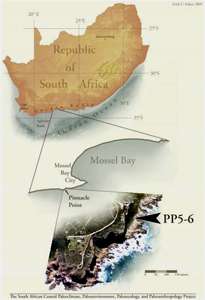 Map of the project area.

"Heat treatment technology begins with a genius moment – someone discovers that heating stone makes it easier to flake," says Curtis Marean, project director and a co-author on the paper. Marean is a paleoanthropologist with the Institute of Human Origins and a professor in the School of Human Evolution and Social Change at Arizona State University's College of Liberal Arts and Sciences. 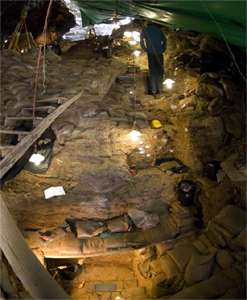 The site is where an international team of researchers discovered evidence that early modern humans employed pyrotechnology to increase the quality and efficiency of their stone tool manufacturing process, as reported in the Aug. 14 issue of the journal Science.

"This knowledge is then passed on, and in a way unique to humans, the technology is slowly ratcheted up in complexity as the control of the heating process, cooling and flaking grows in sophistication," Marean says.

This creates a long-chain technological process that the researchers explain requires a complex cognition, and probably language, to learn and teach.

The heating transformed a stone called silcrete, which was rather poor for tool making, into an outstanding raw material that allowed the modern humans to make highly advanced tools.