These photographs and text are from the excellent book by Ivar Lissner, translated into English by J. Maxwell Brownjohn called 'Man, God and Magic', published in 1961.

In 1939, at the beginning of the Second World War, he wanted to enter the uncharted area of the Amur Bend, in Manchuria, at that time controlled by the Japanese.

He spent a whole year assembling permits, passports and papers, surmounting one obstacle after another. Then he travelled the entire length of the Amur, 2750 miles, a distance from England to Newfoundland, three times the length of the Rhine. The Amur drains all of the swampland of the Siberian taiga. The water is as clear as crystal, and was called by the Chinese the Black River, to distinguish it from the silt laden yellow rivers which drain China. He reached the northernmost point of Manchuria safely, lived in the trackless taiga and got to know the people living there. He remained in the forests of Manchuria and the steppes of Mongolia for some years. These photographs are a testimony to his endurance and strength of character.

Most of the people of this area, the Tungus, depended at that time on the reindeer for food, clothing and shelter. It is a fascinating story.

Taiga is the virgin forest of Siberia. But it is more. Taiga is wild, uncleared terrain, mostly forest, but also composed of open ground, swamps and barren hillocks. Taiga is what the Russian peasant calls the land that begins where his tillage ends.

.... the greater part of northern and central Siberia is swamp taiga. The largest marshy area in the world, it stretches for hundreds of miles and consists of stagnant lakes and boggy pools of glistening green water interspersed with myriad tufts of grass. The general name for the people of this area is the Tungu. The Orochi are a particular group of the Tungu who subsist almost entirely on the products of the reindeer.

.... In the North Manchurian taiga ........... I knew the Orochi, the reindeer men. Oro means reindeer, and chon is a man. .............. The whole culture of the Orochi, everything they own or do, stems from or refers to the reindeer. The reindeer is not a wild animal that has been caught or broken in, but a beast of burden bred by generation after generation.

Reindeer feed principally on lichen. They also eat fungi, berries, and young tree roots, but without lichen they do not thrive.

The average dead-weight a reindeer can carry effectively is about seventy two pounds, or 33 kilograms. A reindeer carrying this weight will cover twenty or thirty miles of the most difficult terrain in one day, and in winter, when two or four animals are harnessed to a sled, they are capable of doing forty five miles or more, although the Orochi do not use sleds. Reindeer are tended and milked by the women folk. Their milk is sweet and thick, but poor in fat. Almost everything the Tungus wears is made of reindeer hide: the stout mocassins which protect his feet, his trousers, his Tungus apron, his jerkin, his cap and, unless they are made of blue squirrel skin, his thick gloves.


Some Orochon Items in the Loukashkin Collection
In 1935, Anatole S. Loukashkin, then Curator of Harbin Museum of Natural History at the Manchuria Research Institute, directed a collecting expedition to the Great Khingan Mountains, with Orochon tribesmen as guides and hunters. His story of this expedition gives many glimpses into the lives of these people. Below are some decorated bags from this expedition.

Orochon families usually roam in groups of three or four, their reindeer forming communal herds which are left to graze and find water for themselves. Reindeer leave camp during halts to look for pastures which are generally many miles from their owners resting places, sometimes staying away for days on end. They return to their owners because of the threat of the wolf, from which the Orochi protect them.

A reindeer herd generally consists of two or three bucks, about twenty five gelded males, twenty-odd does, ten to fifteen young does of breeding age, and about thirty calves. Roughly half the animals dies before reaching sexual maturity, for reindeer are extremely susceptible to infections, particularly pneumonia.

In summer reindeer are tormented by flies, and horsefly larvae can kill a full grown reindeer. The Orochi build large fires on a still summer day, and the reindeer stand in the smoke to evade the torturing clouds of gnats and gadflies.

The Orochon needs no stick or whip to drive his reindeer. They obey his word of command, and each reindeer has a name and comes when it is called.

In former times, the Orochi used to hunt bear with a spear called the palma, an extremely dangerous undertaking, because the spear had to be thrust into the animal's heart from close quarters, when the bear reared to attack. 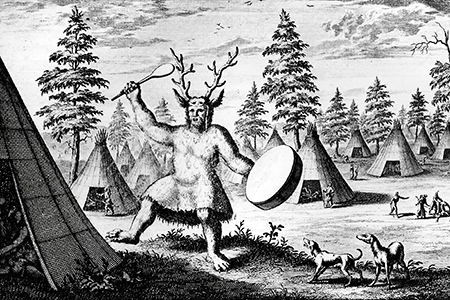 An old engraving of a Tungusic shaman, bearing a striking resemblance to the 'dancing magician' discovered by Count Begouen in the Trois Freres cave in 1918.

This is the earliest known depiction of a Siberian shaman, produced by the Dutch explorer Nicolaes Witsen, who authored an account of his travels among Samoyedic- and Tungusic-speaking peoples in 1692. Witsen labelled the illustration as a 'Priest of the Devil' and gave this figure clawed feet to highlight his demonic qualities.