The Hermaphrodite Venus from Balzi Rossi

The Hermaphrodite, so named by Piette, probably has the same origin as the Losange Venus and the Polichinelle Venus and has also been acquired and published by Piette (MAN, no 49.280). The statuette, of translucent green soapstone, is badly damaged: the head is broken off, a flake removed from the back of the thighs and lower buttocks, and it has also been broken into three pieces that were glued together. As it stands, the figure is 52 mm high, 17 mm wide and 11 mm thick, and the maximum dimensions are at the pelvis.

The surface is polished and worn, with remains of concretions in the concave parts. The neck, what remains of it, is shown clearly. The torso is very flat, with normal breasts hanging low. The belly is large, but not commensurate with that of the Losange for example. Under the stomach are three difficult to interpret features: laterally, two elongated subtriangular masses we have considered the representation of hands on the belly, which is possible but not obvious, since they might also be inguinal fat folds, recalling those which may be observed in the Bushman women.

Figure known as the Hermaphrodite, made of soapstone

For the central feature, it is held to be an erect penis, but this is unconvincing. It takes a lot of imagination to distinguish the penis, which remains the essential element of the phallic representation; as for the roughly circular mass that is found below it, it could be a testicular pouch.

For the rest, hips, buttocks and thighs are of normal proportions, with no trace of extra fat deposits. In what remains of the dorsal side, since there is a very moderate projection of the buttocks, there is no trace of steatopygia. The back of the statue, despite its poor condition, is also very interesting. It is well shaped, with a spinal depression around the shoulder blades, and an indication of the curvature of the small of the back, emphasised by a cluster of parallel incisions; the buttocks, as we have said, are normal, with an incomplete medial hole for the anus. As for the legs, the lower limbs are broken off at the knees.

It might be thought that the incisions marking the curvature of the small of the back represented a belt, reminiscent of the Russian Kostenki statuettes, and one can observe that these incisions extend on either side of the figure and join at the front, at the lateral features mentioned above. It is therefore possible to suppose that the whole thing, the back belt and the frontal features, represent an ornament of some kind - as well as possibly male organs.

The fact is that in the present state of our knowledge, it would be unwise to affirm too authoritatively one or other of these interpretations.


Text above translated and adapted from Delporte (1993)

Figure known as the Hermaphrodite, made of soapstone. Rear view. 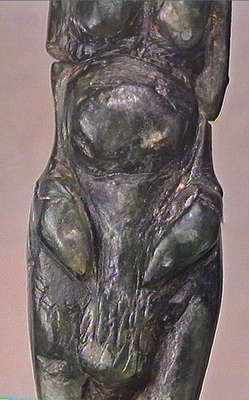 Figure known as the Hermaphrodite. 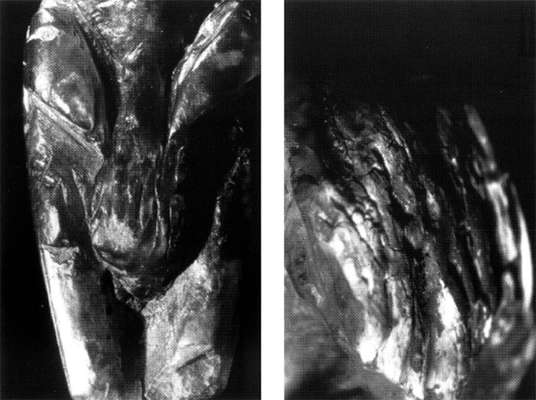 Details of incisions which are similar in the Hermaphrodite and the Ivory figurine in red ochre.

(left) lower part of the 'Hermaphrodite' showing the area of vertical incisions (coll. MAN).
(right) the hair of the 'Ivory figurine in red ochre' (coll . Bolduc).

White et Bisson (1998) write: The most enigmatic of the pieces, the 'Hermaphrodite', which, although endowed with breasts, and clearly pregnant, is depicted with a bulge at the crotch marked by vertical incisions and a trough that runs from the top of the bulge to the base of the protruding abdomen. This bulge was first interpreted as an erect phallus and testicles on a female torso, hence its name.

Recently Duhard (1993) argued that these attributes show a birth, the bulge being the head of a baby emerging and the lines indicating the hair. In support of this interpretation, it should be noted that the technique to represent the hair is identical to that used on the 'Ivory figurine in red ochre'.