Mount Kaputar, in Mount Kaputar National Park was formed in volcanic eruptions about 20 million years ago. The whole complex is called the Nandewar Volcano, which formed as the Australian plate moved over a hot spot in the earth's mantle. This hot spot is also responsible for the Nandewar Ranges, the Warrumbungles, and Mount Canobolas.

The lavas were rhyolitic in the region of Killarney Gap, but basalt and trachyte were the main types when the Mount Kaputar lavas were formed. Altogether about 400 cubic kilometres of lava came to the surface, forming a volcano which was originally 500 metres above the surrounding plains and 50 kilometres across.

Text above adapted from http://www.visitnarrabri.cfm.predelegation.com/files/uploaded/file/Information%20Leaflets/Mount%20Kaputar.pdf 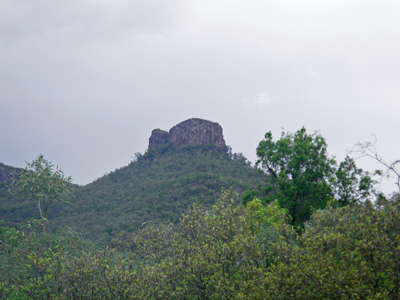 The Mount Ningadhun is one of the first good summits to be seen on the road up the mountain. Seen here from the road, through misty rain in late afternoon. 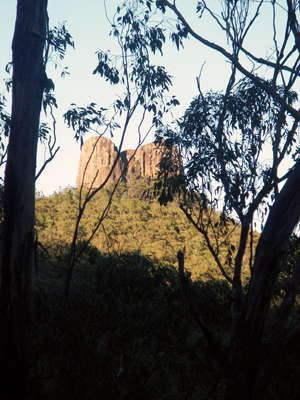 Mount Ningadhun, 1 373 metres high is a volcanic plug seen here in early morning light on the way back down the mountain, from the road. 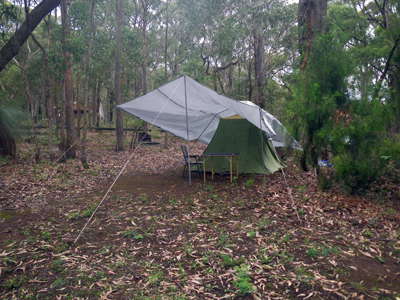 Bark Hut Camping Ground is the first one you come to on the way up the mountain, about 6 km from the top. It has water that you need to treat for drinking, though it looked pretty good to me, better than most of the water I use in the gorges east of Armidale. I treated it as usual with 40 drops of 20 volume hydrogen peroxide per litre, and had no problems.

The camping ground has flush toilets and hot water showers, but is less patronised and has fewer picnic and cooking facilities than the larger Dawson's Springs campground near the top of the mountain, which suited me fine. I had everything I needed in any case.

I set up my car touring tent with the tarpaulin, since it was raining lightly, and I was going to be there for the following night in any case. 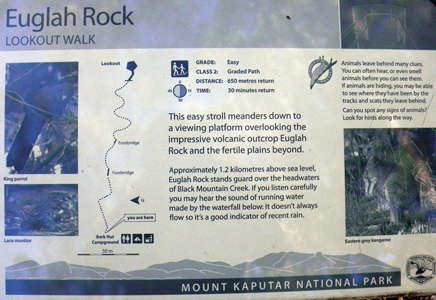 All the walks in the park are well marked and signposted. This short walk to the Euglah Rock lookout is accessed directly from the Bark Hut camping ground. 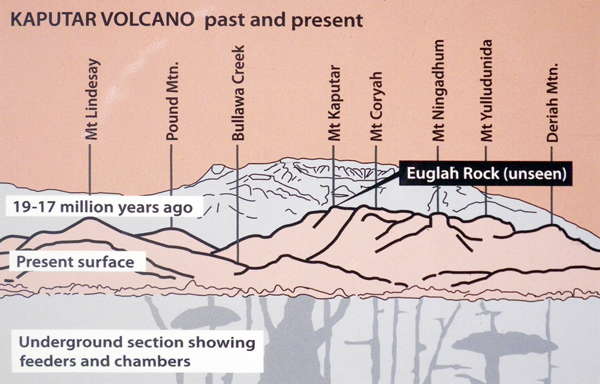 At the end of the track there is a well constructed lookout platform. The text below is transcribed from the display on the lookout.

'The area was once a giant sheet of cooled volcanic lava. Water has slowly eroded away the sheet, forming a network of creeks and leaving isolated rock formations made of the harder rock.

Below you is Black Mountain Creek, one of a series of creeks that flow south from Mount Kaputar. Over millions of years the creeks have carved up the lava, leaving behind the flat topped flow remnants including Euglah Rock and Camel's Hump. '